“The world is an awful, uncool place; it should be burned to the ground, and anybody not cool enough destroyed.”

This is the somewhat extreme premise of Mango Protocol’s MechaNika. With a basis such as that, one might expect a dark and haunting descent-into-madness story full of Lovecraftian insanity and visuals. In reality, MechaNika stars adorable 7-year-old Nika Allen, a misunderstood child prodigy with plenty of sass who’s tired of living in a world filled with condescending adults. Her solution to this problem is to build a robot of destruction using parts she finds, trades for, and creates herself at home and around town, in a short point-and-click adventure that seems to suffer from a mild case of identity crisis.

If not for its dark theme, it’d be easy to dismiss MechaNika as a kids’ game due to its simple art style resembling a Saturday morning cartoon and its nursery-style soundtrack. But while it features a young anti-hero, the actual subject matter is directed quite purposely toward an adult audience. Nika must deal with her ostracism from society: her parents downright ignore her, her teachers are wrapped up in themselves, and most of her peers don’t relate to her. There are deeper issues at play here, like a reference to her parents having had a failed pregnancy some time ago, possibly causing them to retreat into themselves, and Nika’s grandparents becoming recently estranged from each other. 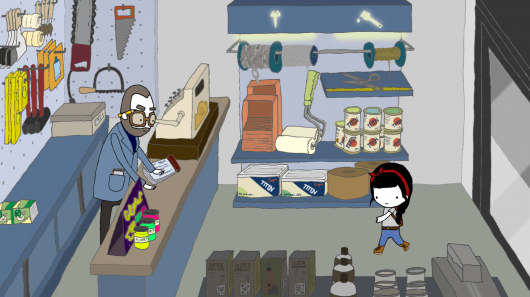 But these things are really just window-dressing – MechaNika doesn’t attempt to delve into Nika’s mind to analyze her. Instead, the game passes itself off as a whimsical dark comedy. It maintains a silly tone throughout, even though Nika herself treats her dilemma seriously. The local school, where the game begins, is surrounded by an electrified fence to contain the students, Nika encounters an aging cosplayer on the street who flexes his glutes for the public’s pleasure, and at one point Nika dresses up as her grandmother, then walks around and interacts with others as she imagines a senior citizen would. But there are other times when MechaNika tries too hard to be edgy, like when Nika has to supply a homeless man who lives in a cave outside of town with pornography to get an item. But the moment that really drove the point home was when her grandmother (out of the blue) makes some very graphic references concerning her grandfather engaging in bestiality. Injecting moments of South Park into an otherwise playful game just didn’t quite jibe for me, though tastes may of course differ.

The game’s visuals, while also a little off-putting at first, grew on me after a short while, especially the way Nika narrows her eyes and makes faces when people annoy her – it’s just cute coming from a child her age. MechaNika has a hand-drawn look, with thick outlines, caricatured cartoon townspeople, and basic environments. Animation is just as simple – again, think budget cartoons – with most characters simply going through a few choppy frames over and over again. Nika herself, however, is fully animated. Pre- and post-game cinematics are simply still frames with text boxes, all very rudimentary but sufficient.

There are no voice-overs. All dialog is presented via comic book-style speech bubbles and text boxes, for which the developers have included a more basic font if the preset cursive doesn’t appeal to you. Music is hit-and-miss. For the most part, the childish nature of the graphics is present in the music as well. The couple of tunes you’ll hear run the gamut from pleasant to dull, and there’s only a handful of different tracks – around a half dozen or so – to hear. Ultimately, neither the graphics nor the music do much to make the game stand out in the end. 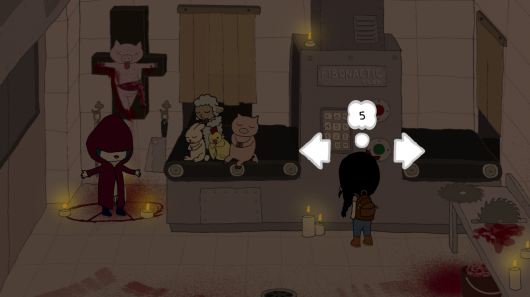 Though I felt a little iffy about MechaNika’s comedic bent, its actual gameplay works flawlessly and left me satisfied, despite its short duration. Early on, you are presented with a blueprint of items that Nika requires to build her robot, and it’s up to you to scour the town to get what’s needed. The blueprints don’t always spell out what items you need to look for, however. About half the items only provide descriptions such as “something that can be launched” or “something that can propel big objects”. It’s up to you to figure out what item matches best, then assign that item from the inventory to the blueprint, a formula that offers quick fixes of success as the blueprint rapidly fills up. It’s pretty easy to find an appliance in your house that will supply you with a microwave transmitter, but having the right tools for the job and then getting Nika’s mom out of the room to let her work in peace are a different matter. Traditional lateral thinking and correct inventory item use are required, though most puzzles are self-evident and the level of challenge fairly low. Once all pieces are acquired, you’ll gain access to Nika’s secret lab for the final steps of building her death machine.

The inventory is accessed by clicking on Nika, bringing up a display of her backpack on-screen. All inventory items, the blueprints and a save feature are incorporated as elements of the backpack. Nika even carries around a little metal flask, filled (according to her own description) with a concoction of cognac and cocoa. Imbibing a swig of this mixture causes her to become a little tipsy, freeing her “thought processes” (in other words, offering you a hint of what to do next). Interacting with the rest of the world is done by simply clicking on items or people; if Nika can interact in any way (most of the time she cannot), icons appear on-screen, like “talk” or “pick up”, etc. When Nika is in conversation with somebody, the speech bubble will display only one dialog option at a time, even though multiple topics are usually available. To see all topics, you’ll have to scroll through using arrows – an odd design choice, and a bit of a hassle when you want a quick overview of all dialog options at once. 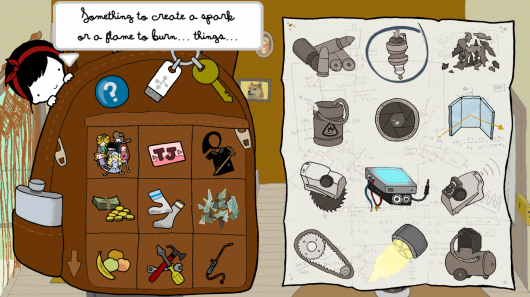 As satisfying as the shopping list-style point-and-click gameplay is, I never found myself truly immersed in Mango Protocol’s “Psychotic” universe, as it’s called, which seems to be a meta world in which various stories are meant to take place. (One of the more unique easter eggs is that Nika can have a long chat at a café with two of Manga Protocol’s actual developers, who are more than happy to discuss her plans to destroy the world they’ve designed and ideas for future games.) MechaNika itself ends on a cliffhanger, hinting at possible plans for future installments. However, the world is a bit too limited, with only a handful of places to go and too few characters to interact with, and then only on a superficial level. Players will find lots of references to other games, movies, and general pop culture in MechaNika, like Ninja Turtles, Halo, and Alien, but while the the world is certainly quirky, it is far removed from being truly “psychotic”.

Humor is a subjective thing, and others may like MechaNika’s dark comedy where it fell flat for me, so I’m willing to look past that for the most part. I did like the gameplay itself, as straightforward as it is. But the music could certainly do with more variety, and most players will have seen and done everything there is in less than two hours. The reason it’s so short is that the big payoff promised from the beginning is pushed to a sequel, as the game ends abruptly just as Nika completes her robot. Really MechaNika seems more like an introduction to the world, a first act rather than a standalone game that ends up leaving a more tepid impression than by rights it should have if allowed to develop fully.

MechaNika is available at:

MechaNika is a unique concoction of childlike presentation and mature content that doesn’t seem to know which audience it’s trying to please, and never quite manages to fulfill its own evident potential.

GAME INFO MechaNika is an adventure game by Mango Protocol released in 2015 for Android, iPad, Mac and PC. It has a Stylized art style, presented in 2D or 2.5D and is played in a Third-Person perspective.

What our readers think of MechaNika

I like a lot, good me thinks. I think that although this game alone is pretty lacking in content, I do like the game and I am excited for future installments and I am very... Read the review »