Horror runs a wide gamut, from the goriest, most blood-curdling viscera, to nerve-rending jump scares, to slow burns and edge-of-your-seat tension, and everything in between. The Charnel House Trilogy, by Owl Cave, falls squarely on one extreme of this scale: More Poe than Lovecraft, it absolutely smacks of classic gothic horror. Presented as a fairly normal slice of adventure narrative, it throws the occasional subtle curve ball to remind you that not all is what it seems. While not rating high on the modern Terror Meter, this surprisingly short and easy, low-res point-and-clicker is nonetheless capable of a feat many games strive for: to present a digital world that at once feels believable, even as belief-defying things happen around you.

A trilogy in name rather than in practice, Charnel House is more like one game split into three acts. You’ll jump between two main characters from act to act, but there’s a common setting, timeline, and supporting cast to tie it all together. Attempting to live the newly-single New York life after a messy breakup with her boyfriend, Alex Davenport decides to pull up stakes after some bad news concerning her ailing father, and heads to the train station to catch the next ride headed out of town. Armed with only a duffel bag, she meets Dr. Harold Lang on the station platform, both awaiting the same train. The two don’t know it yet, but their voyage will be anything but ordinary, and their arrival all but certain.

Each of Charnel House’s three acts gets progressively longer, with the first one clocking in at a generous 30 minutes of 2-3 hours in total. Taking place almost entirely at one location – inside Alex’s meager NYC apartment – the act introduces us to the mechanics and sets up many of the game’s main characters while leaving the narrative purposely vague, to be fleshed out more later on. It also includes a couple of interesting and unnerving twists, which set the stage for what is to come. Through a recorded voicemail message we get a glimpse into the strained dynamic between Alex, her sick father and estranged mother, and a desktop wallpaper photograph introduces us to her ex-boyfriend Gavin (whose face has been violently scratched out). 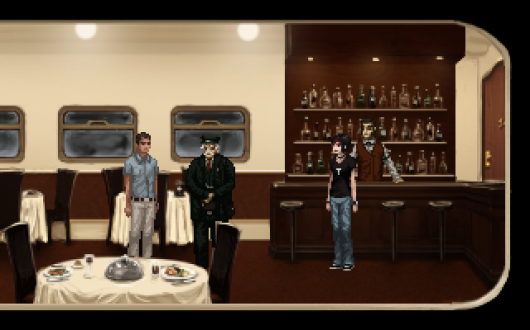 After some basic puzzle-solving and getting used to the controls (left-click to interact, right to examine), the first act, titled “Inhale”, soon nears its end. As Alex arrives at the train station, you are reminded that not everything is as it seems. The train attendant, a portly and seemingly friendly fellow, ushers the travelers on board, busying himself with a luggage cart left behind on the platform. As he amiably mumbles to himself, a crow flutters by and lands on his shoulder. What happens next is so sudden and unexpected that it made me sit up straighter as a chill ran down my spine, not least because of the absent-minded casualness it was performed with, an event no more out of the ordinary than tying your shoelaces or brushing your teeth. It’s eerie, unsettling moments like this – an out-of-place reaction, an off-putting remark slipped nonchalantly into conversation, an act of unexpected violence – that really draw the eye and let us know that anything can happen, at any time. And as the game draws on, it does so with increasing regularity.

“Sepulchre” and “Exhale”, acts two and three respectively, take place on the actual train itself (which I assume to be the titular Charnel House), with players taking control of Dr. Lang during “Sepulchre” before returning to Alex in the final act. The train’s confined space means you’re restricted to two passenger cars with three cabins each, and the dining car. This represents the entire setting for the remainder of the game, suggesting constant repetition for the duration. However, at some undefined point along its journey (or perhaps even the instant the doomed passengers set foot on it), the train appears to cross some sort of dimensional border between life and death, reality and purgatory, and you’ll never know what to expect when entering a cabin; even re-entering immediately after exiting may present you with a wholly different area than the one you just exited.

Since the train has clearly entered the realm of Anything Goes, it shouldn’t come as a big surprise when Alex and Harold run into people from their past, who have absolutely no business being on board. Luckily, the train’s staff – attendant Don and barkeep Floyd – are there to direct Alex and Harold along as the two discover the train’s secrets. The game provides a string of invisible step-by-step objectives that take you neatly through its narrative, with little chance to get stuck or “derail” along the way. A typical sequence of events may look something like this: Enter cabin, interact/examine/get item, leave cabin, hear a noise/notice a door ajar/talk to Don to find out where to go next, then repeat. 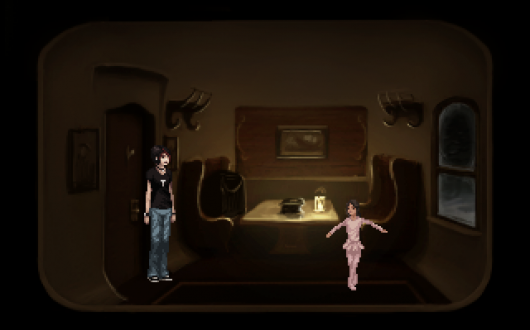 There are a number of inventory-based puzzles to solve along the way, well integrated into the gameplay. Whether finding keys to locked doors, opening cabinets and boxes, or using items on each other within the inventory window, you’re never taken out of the narrative to solve a forced logic puzzle. That being said, the level of challenge is rather low, what with a limited pool of items to choose from and the restricted space of the train; most of the puzzles hardly even register as anything other than pausing for an extra mouse click or two. If you find yourself unable to progress, a quick look into your inventory will often offer a common sense solution. Due to the game’s linearity, chances that you’ve missed an item somewhere along the line and must now search for it are also rather low.

According to its credits, Charnel House features an extensive musical score. While the music is lovely – from somber piano tunes to gothic choruses worthy of any classic tale of terror – and fits the mood of the game perfectly, I was honestly a little taken aback at how much music was credited for this short game. There are entire sections of gameplay devoid of music, and I found myself consciously thinking that some sort of music at these moments would have been nice. On the other hand, I also found myself dwelling on the main menu screen for some time prior to starting the game, delighted by the theme for several minutes. 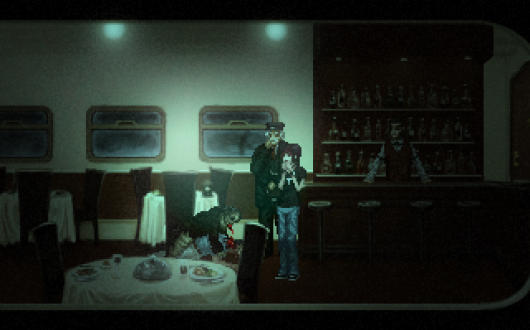 I found the voice performances to be generally well done, even though our two protagonists took a while to grow on me. Leading the cast are Madeleine Roux as the plucky Alex, and The Escapist’s Jim Sterling as Rob, Alex’s concerned neighbor, who, along with Dr. Lang and Don the train porter, make up the main cast. (Don’s heavy Irish accent also proved an acquired taste.) What helps to sell the voice-overs further is an intuitive and clever script – if one disregards the gag-inducing self-referential video game jokes and how hard Alex tries to convince the player that she, too, is a gamer.

The graphics, on the other hand, serve their purpose without being particularly impressive, as retro pixelated images are wont to do. At the same time, they don’t hinder or detract from the experience in any way. Environments are clean, with some surfaces like walls and wood flooring looking especially nice. The entire game takes place indoors, either in Alex’s apartment or on the train, so expect lots of earthy browns and mochas, gothic blacks and tans, and cool, artificial light. Characters fall victim to being too pixelated to emote well, but each one has a detailed portrait that pops up during dialog that at times even reflects the appropriate expression of the character’s state of mind, be it angry, frightened, surprised, etc. 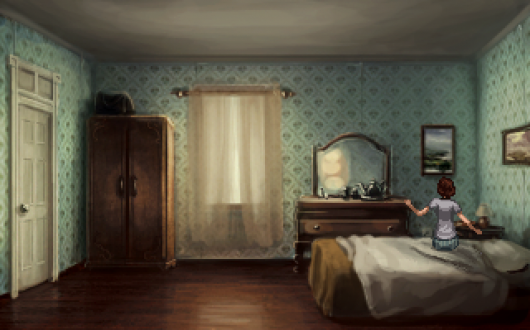 As the game moves into its third and final act, I expected some revelations that would tie the two previous, disparate acts into one cohesive whole. I got what I wanted, but only after a fashion, and not with as much oomph as I had hoped. Some connections are made between Alex and Harold’s stories, a few explanations are offered, and a subplot concerning Alex being harassed by a stalker is brought to a satisfactory conclusion. But it all felt a little loose and tenuous to me. The big questions of the game remain unresolved: What fate ultimately befalls Alex and Harold? What is the true nature of the train? And what of the misshapen creature that appears several places, referred to as “The Writer”? Is there a connection between him and The Charnel House Burial, which Alex keeps a copy of on her bookshelf and seems to foreshadow some of what is to come? I honestly thought I was doing just fine understanding what was going on, but the final minute or two before the credits rolled proved to be so out of left field that they seemed like a cop-out to providing an ending that made more sense. To be fair, it was the same brand of madness that made the rest of the game so unpredictable, but this time the rug was pulled out from underneath me at a crucial moment.

It seemed to me as though the developers expected players to possess a certain familiarity with the game’s content and themes, much as in other games based on existing works. After some post-game research, however, I discovered there wasn’t any real source material (though “Sepulchre” was previously released on its own as a freeware adventure). The Charnel House Trilogy purposely keeps players partially enshrouded in darkness, without giving away all its secrets. I suspect that a second playthrough will reveal allusions and motifs I simply didn’t know enough to pick up on the first time around, and I may just be motivated to try.

The Charnel House Trilogy is a strange beast, in more ways than one. It creates a world out of space and time that’s as pleasant to experience as it is alien. It’s quite brief, very easy, and fairly linear, yet satisfies with its presentation and classic horror vibe. It doesn’t tie events up in a nice bow, but leaves many questions to be answered, perhaps in future installments. It's likely worth a trip for anyone who values atmospheric storytelling over gameplay, and it's great fodder for speculation afterward. Just beware what you may unearth, hidden behind the threatening façade of an empty passenger train screaming down the tracks in the middle of the night.

The Charnel House Trilogy is available at:

Asking players to delve deeply into its philosophical underpinnings but too easy to make the actual gameplay particularly fun, The Charnel House Trilogy is an uneven yet oddly compelling ride.

GAME INFO The Charnel House Trilogy is an adventure game by Owl Cave released in 2015 for PC. It has a Stylized art style, presented in 2D or 2.5D and is played in a Third-Person perspective.

What our readers think of The Charnel House Trilogy

some good moments, a lot of potential, but not overly satisfying. uneven writing; partly believable and good, partly way too cheesy. uneven voice acting. puzzles - what puzzles? music and graphics are solid. and the... Read the review »