The Perils of Man review

A Place for the Unwilling

Adventure games by IF Games

The Eberlings are a family of inventors and scientists who, for the past century, have tended to disappear just when their top secret research started showing promise. Where did these men go, and why did they leave? As a coming-of-age tale with surprising depth and heart-breaking dilemmas, The Perils of Man combines gadgetry and the science of risk with an emotional tale of a family too brilliant for its own good.

As the game begins, the youngest Eberling, Ana, has just turned sixteen. She is celebrating alone with her mother in the great, creaky family mansion in Switzerland. It’s been ten long years since Ana’s father, Max, departed without a trace. Her mother, traumatized by the family curse, never leaves the mansion and does her best to keep Ana insulated and uninformed. To a teenager, isolation is frustrating and boring. To someone like Ana, who has a voraciously inquisitive mind, it is mental torture.

Ana’s mother is convinced that the Eberling mansion is haunted by her husband’s ghost. The mansion has strangely transient cold areas. Objects shift locations or mysteriously appear from nowhere. A fierce and interminable thunder and lightning storm rages outside. The roof leaks and the electricity has gone out. But the discovery of a purple cylinder, left years ago by Ana’s father to be given to her on her sixteenth birthday, thrusts Ana into an adventure filled with revelation, adversity, and as the title suggests, risk. 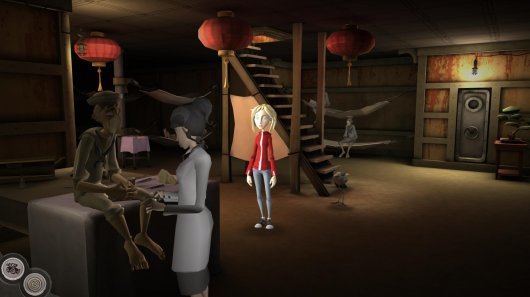 Ana soon discovers that her ancestors stumbled across a unique way to assess and manipulate catastrophes. Imagine the power you would possess if you had 20/20 hindsight and the ability to travel through time. What would you risk to change a seemingly horrible fate? As Ana follows her father’s footsteps into the past, she becomes entangled in decisions that earlier Eberlings have made to change or confirm a timeline where cataclysm has threatened many innocent lives. Along the way she must navigate a minefield of traps, opportunities, and potential missteps on an intricate path past the failures of her ancestors in order to return home unscathed.

The Perils of Man is the product of the unconventional minds of Bill Tiller and Gene Mocsy, who also collaborated on A Vampyre Story and Ghost Pirates of Vooju Island. As in their previous games, Perils features characters whose backstories and personality quirks are amusingly revealed as the game progresses. Ana is obsessed with finding out what happened to her father and eager to learn more about her family’s past, no matter the cost. She has no interest in typical teenage concerns – clothes, friends, contemporary culture. Early on, she teams up with a sentient robotic bird named Darwin, who was invented by Thomas Eberling 150 years earlier. Darwin provides cheerful commentary as well as assistance at certain points (there’s even a brief sequence where you play as Darwin). He offers glimpses into the Eberlings’ secrets and facilitates an odd form of communication between Ana and his inventor.

Ana and Darwin’s journey sweeps them into the past to other locations, including the Aladon Theater in 19th century London and a ship at sea during World War II. Their travels generate encounters with other offbeat characters: the London Bobby whose ambition is avoiding danger and discomfort; a paranoid sea captain who wants to throw everyone in the brig; and the ship’s doctor who is the only source of calm and sanity during a colossal tragedy. Character animation is a bit stiff, though not distractingly so. Dialogs are often witty, imparting much about each character, and hinting at aspects of the unfolding mystery. Environmental hotspots advance the player’s knowledge; clicking repeatedly often initiates varied comments for those who want to delve deeper. Voiceovers are consistently professional, expressive, and convincing. 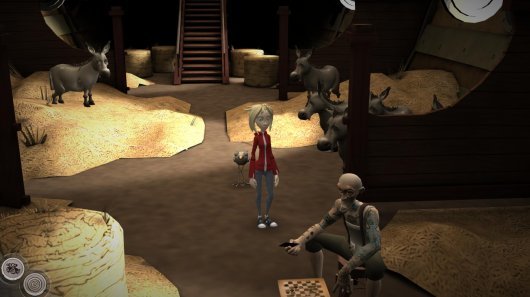 Frequent cartoon-like animated cutscenes provoke and challenge, divulge plot twists, reveal puzzle clues, dramatize moral conundrums, and provide backstory (those from the past are sometimes in black and white). These scenes emphasize close-ups of the characters’ faces during their moments of greatest vulnerability and physical jeopardy.

The 3D graphics in Perils are stylized, with blocks of vivid color and odd camera angles. Rooms in the Eberling mansion look out of kilter, slightly tilted. The ceiling in Max Eberling’s study is so high that the bookshelves ascending the walls disappear off the screen, seemingly stacked to infinity. Stately, elaborate windows ornament the ground floor, with hazy light streaming into shadowy rooms. The house hides many secrets, underground surprises, and unexpected exits. Two locations in this game are especially memorable: a circular room full of shelves containing evidence of every catastrophe in recorded history, and a theater lobby with a mirror-like floor and a silhouetted view through French doors of horses and carriages waiting at the curb.

Ambient sounds and animations add to the atmosphere in each locale. Rain plops on the ground outside the Eberling mansion, lightning flashes, and the fountain burbles, while indoors the fireplace flames crackle and dance. A dissonant piano melody accentuates the atmosphere of isolation and loss. In the Aladon Theater, sparks from an electromagnetic experiment sizzle downwards and reflections ripple across the shadowed cistern walls. Dust motes and the sounds of applause drift through the air backstage, while notes from a tentative waltz tiptoe in the background. 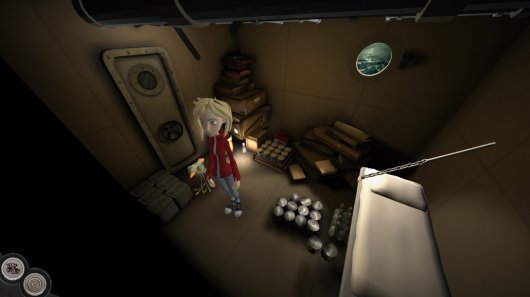 The emphasis on gadgetry and the interaction with century-old devices created by Thomas Eberling convey a steampunk aura. The puzzles are well-integrated into the story – the home of eccentric scientists becomes a mechanical playground, and looming disaster in other locations is the perfect inducement for tweaking things. Gameplay challenges include creative use of inventory items, assembling and operating contraptions, enabling a diorama device, wielding chemistry lab tools and materials, breaking a clock code, distracting or otherwise influencing other characters, breaking out of locked areas, and doing your best to accomplish some good, such as finding medicines or trying to prevent explosions.

Played from a third-person perspective with a camera that shifts along with your movement, The Perils of Man uses a simple point-and-click interface. The inventory is easily accessible via an icon in the lower left corner of the screen. Items can be combined on the inventory screen, which has a snazzy gear animation that whirls with a clicking sound as it attempts to connect the items you’ve selected. Unfortunately, sometimes the navigational hotspots are oddly placed, and you’ll need to hunt for them as there is no hotspot finder. Environmental hotspots can be very close to one another and easy to miss. The result is a classic pixel hunting challenge, where, when you’re stuck, you must carefully paint the screen with the cursor while trying to see if you’ve missed anything. The few times I was unable to progress, the inability to locate a hotspot was always the cause of the blockage. The game has an autosave system, but there’s no way to save manually.

Perils has a hint system – a welcome accommodation for all gamers, especially those with limited adventure game experience. Hints are graduated and based on the room you are in. The system does not track your progress, however, so if a room has three challenges and you’ve solved the first two, you must click through all the previous hints before you reach the one that applies to your current obstacle. Sadly, the hint system is particularly unhelpful when it comes to locating items. At one point, I needed an item made of a common substance – something that could be found anywhere in the house. I clicked through multitudes of hints, all for challenges I’d already accomplished. Of course the item I was looking for was in the very last area I searched. 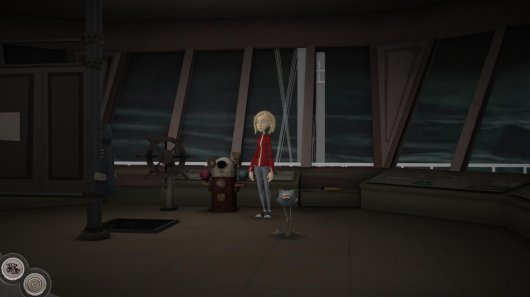 Other than the pixel hunting, the challenges in this game are clearly clued and hit the sweet spot in terms of difficulty. This is not a game with head-scratchingly difficult puzzles. It’s a game with an intricate story, and enough puzzle challenges to keep you thinking and engaged without stopping the story flow for long.

I am always surprised when I encounter a humdinger of an ending in an adventure game, because they are so rare. This one had me transfixed. After about six hours of gameplay (spent taking my time, so others may well reach this point sooner), I watched the ending sequence, at first with trepidation, followed by a stomach wrenching sensation as a scenario unfolded with many lives at stake. At last I experienced one of those revelatory moments when all the subtle indications from earlier in the game came together and suddenly made sense.

There is much to admire about The Perils of Man. It starts with an eccentric family and a seemingly haunted house, and builds these elements into a tale of discoveries, inventions, dangers, and unintended consequences. The writing, voiceovers, quirky locations and ambient effects combine to make the world and the story come alive. The puzzles are logical and advance the story without halting the pace. Though the pixel hunting is frustrating and other minor aspects could use some polish, the overall experience is so compelling that, for me, it ended too soon – I would have liked it to go on and on. The postlude leaves a hint of a sequel. I hope one is in the works.

The Perils of Man is a well-constructed, compelling adventure full of mechanical contraptions, scientific hubris, impending disaster, and singular courage.

What our readers think of The Perils of Man

3.5 stars out of 5
Average based on 15 ratings
Your rating

This game was very short. And quite easy. Pretty much all the puzzles were of the pixel hunting variety, although occasionally you were required to put together relatively simple facts. It sometimes seemed to be... Read the review »

Not perfect, but good enough

Found the game very glichy(cutscene's, gameplay, sounds), but it didnt bother me that much. It's short I agree, but I don't think it should have been a lot longer also. For the story I think... Read the review »

An intriguing story fit for a nicely thought story. Lots of uncertainty in the way the story evolves and surprising elements. Voiceacting is good, animations are pretty good, the style of drawing is nice, though... Read the review »