Lucius was that most frustrating kind of game, the kind that you are forced to damn with faint praise. It was “interesting.” Not good, not even awful. It had a distinctive premise – which it failed to live up to. It “had its moments.” There was great promise for a stealth-adventure game hybrid starring the homicidal child of Satan as he kills off the members of his household one by one. Like The Omen by way of Hitman. The game as released was buggy, awkward, and oppressively linear, but it was peppered with glimpses of a twisted sense of humor and dark cleverness. There was plenty of reason to hope that a sequel might iterate on the strengths of the game and address the weaknesses.

It doesn’t. Lucius II is worse in every way.

The first game told the story of a boy born to a US Senator and his wife in the 1960s. At a young age, the eponymous child was visited by none other than Satan himself, who claimed the boy as his own spawn, commanding him to sow chaos. Driven by satanic bloodlust, the boy used his newfound supernatural powers to secretly kill off his family and their servants, who were generally terrible people and kind of asking for it anyway. 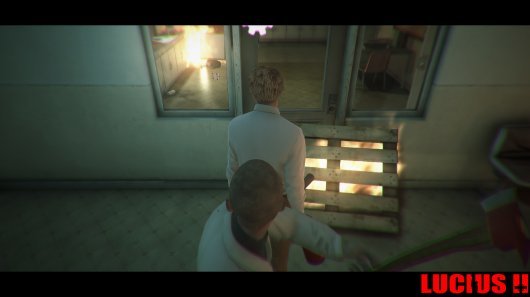 Lucius II picks up immediately after the first game, with Lucius being taken to a psychiatric ward for evaluation following the bloodbath at his family’s estate. He quickly converts many of the other children into cultist followers. Before long, he feels compelled to start killing again and begins making his way through the hospital, slaughtering willy-nilly. Anyone is fair game, no longer just family.

There is more plot here, but it’s bad. Ostensibly Lucius must figure out why his followers have started dying (without his permission), uncovering another string of murders nearby that he had nothing to do with. But the story is relegated to brief cutscenes of the narrator explaining that Lucius was wondering about something or that he had met with someone in the hospital who had told him something. Low on specifics, the tale is a nonsensical mush of telling instead of showing.

At first glance it seems that the graphics here are an upgrade over the original, and in some technical ways they are at least more advanced. The lighting has improved and the textures seem generally higher resolution, but the hospital lacks the variety and sense of place of the family estate. Gray corridors, gray hospital rooms, and gray offices seem copied and pasted rather than the handcrafted, individual rooms and grounds of the first game. The animation remains just as awkward as before, perhaps more so due to the greater reliance on real-time physics, which leads to a lot of random twitching and jerking. The sound and music are serviceable, but the voice acting is uniformly terrible. 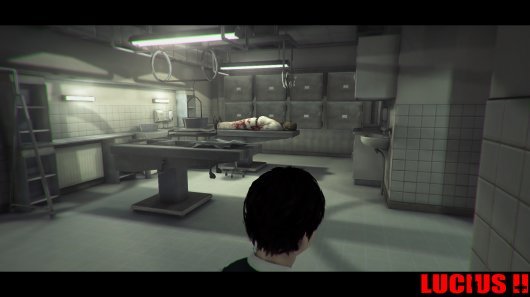 In terms of gameplay, it appears that Lucius II was designed to address some of the critical limitations of its predecessor. Whereas the first game was a series of missions, each with a single target and a single path, the sequel attempts to open up a bit. You’ll be restricted to a floor of the hospital at a time, but you’ll often have multiple targets and non-murder objectives to accomplish before moving up to the next floor.

You’re also free to execute your kills however you like. To that end, the game has moved away from the prescribed solutions of the first game – which worked much like traditional adventure game inventory puzzles – toward a more open-ended set of systems that moves far away from genre traditions. Indeed, it’s too much of a stretch to call the sequel an adventure game at all.

The levels are scattered with items such as pliers, jars of food, and bottles of pills. Each item has attributes listed on screen: usable, poisonous, compelling, etc. There are also hotspots like air vents, water valves, defibrillators, and so on, with their own attributes: breakable, flammable, conductive. The idea seems to be to create an open-ended set of options for getting your murder on. Flood a room with gas and then spark an explosion? Drop some pills into coffee to poison a shift nurse going for a caffeine fix? Telepathically force a janitor to walk into exposed electrical wires? Pour a slippery substance along a hallway leading into an open elevator and then trick someone into walking on it? Sounds delightfully evil. 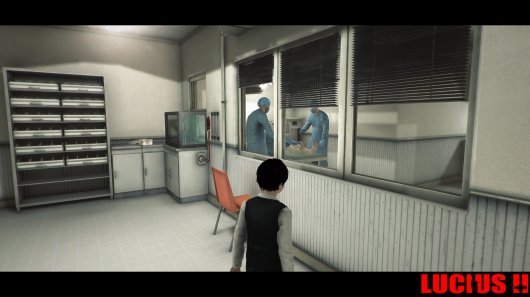 But it all falls apart in practice. How? Oh, let me count the ways.

First, there is far less variety than there initially appears to be. Floor after floor, you’ll encounter the same bottles of pills, the same flammable jars, the same loose grates hiding the world’s worst electrical wiring. Many options are incredibly inconsistent or difficult to pull off. I never managed to successfully trip someone into an open elevator shaft despite trying for a good 15 minutes, and when you fail it’s not often clear whether your plan is impossible or if you just didn’t do it right. I tried dropping acid into the giant, welcoming hatch leading to the hospital’s emergency sprinkler water supply and the vial of acid simply shattered. Is that impossible? Did I just miss due to the game’s wonky physics? I don’t know. I eventually just gave up and poisoned coffee because that ALWAYS works. In fact, I found myself ignoring many of the available options due to the sheer frustration involved with trying to get them working, resorting to the same few tried and true methods over and over again.

A large part of why so few options seem to work is the abysmal AI. Secondary characters operate on a schedule, moving in circles between a few points (nurses might stop at their desk, then check on a couple of patients, then get coffee, then back to the desk, repeat). If they catch Lucius in a restricted area or doing something alarming, a suspicion meter hovering over their heads rises. Eventually they’ll panic and begin running around, abandoning their routine. The list of things that cause suspicion is inconsistent, unpredictable, and hilariously unrealistic. 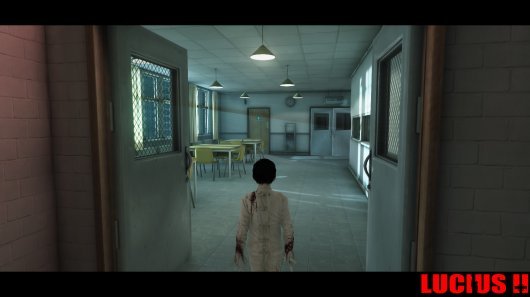 An illustration: I had just killed a doctor in a particularly gruesome manner. He had been decapitated and his blood had splattered the walls of his desk. I stood next to his headless corpse in a pool of his blood, trying to pick up his keys, when a nurse walked by and looked in and stared directly at the grisly scene. She then continued on her way, not taking notice at all.

Yet when you need to evade suspicion, like having Lucius stealthily swipe something off the counter, for example, the game makes it incredibly hard for you to do so. For a supposedly crafty son of the devil, Lucius seems hell-bent (pun intended) on being as conspicuous as possible. He literally cannot pick up items with his hands – instead he uses his telekinesis to levitate the items a few inches above his hands. Want to pick up a can of beans? There better not be anybody around because they’ll see you using your supernatural abilities and immediately freak out. You are consistently handicapped in any attempt to do anything clever or interesting, whether by floaty controls, inscrutable AI, buggy physics, or bewildering design choices.

So you poison coffee. Or you throw a wallet under exposed wires, because everyone knows that humans will abandon all sense of safety in pursuit of a few bucks. You’ll find a couple of methods that work consistently and rely on them over, and over, and over. There is an RPG-style progression system that unlocks new satanic abilities, like the ability to start fires from a distance and limited mind control, but the game is so stingy with experience points (gathered from killing people) that it seems any powers that might be worth a damn are held off until the much later stages. Perhaps even that is just wishful thinking. At some point, after multiple levels in a row of searching for the least impossible ways to kill idiotic nurses in order to further a story I had no investment in, I decided to stop playing.

In the service of offering increased freedom to kill in devious ways, Lucius II replaces the awkward but endearingly twisted puzzles of the first game (which made it feel at least superficially like an adventure) with tedious, repetitive, and often broken systems. It also takes its predecessor’s dark humor and substitutes it with plodding exposition that fails to treat its dark subject matter with either gravitas or wit. In some ways, it is a more ambitious game than the first, but in every way, it is worse.


Offers a tiny glimpse of what might have been, but manages to execute just about everything wrong.

GAME INFO Lucius II: The Prophecy is an adventure game by Shiver Games released in 2015 for PC. It has a Illustrated realism style, presented in Realtime 3D and is played in a Third-Person perspective.

What our readers think of Lucius II: The Prophecy

quite far from an adventure game

Even if I like Lucius II it really has nothing that resembles an adventure game.... anyway it's a fun concept and though extremely buggy it's fun and worth every penny. Read the review »