An Airport for Aliens Currently Run by Dogs

Somewhere out there a space marine is discovering the horrors of space war; a ragtag band of survivors are facing difficult moral quandaries in the face of the zombie apocalypse; and an elf is wading his way through the racial tensions of Stodgy Fantasy Capital City. Lessons are being learned, tears and blood are being shed.

Jazzpunk is one of the strangest, most blatantly absurd games I’ve ever played. It is also among the funniest. Playing through Necrophone Games’ first major commercial title is a akin to riding a clown car through an Airplane!-style spoof of a Cold War-era spy adventure while dropping acid with Monty Python and Dr. Steve Brule. It’s a mishmash of ideas thrown at you in such rapid-fire succession that even the gags that might have fallen flat don’t have a chance to in this amalgam of ‘60s nostalgia, retro-futurism, old school video game humor, non sequiturs, puns, and fart jokes.

In Jazzpunk you play as a spy named Polyblank, tasked with various acts of espionage by your director, aptly named The Director. These missions take Polyblank throughout the game’s skewed, off-kilter version of the Cold War. You’ll visit a Soviet embassy, Japan, a tropical resort, and more. The context for all of this is minimal – The Director says go do this, you take your Missionoyl™ pills, pass out, wake up in the mission zone (naturally), and wander around triggering funny things. That’s the game in a nutshell.

In most funny games, the comedy sits alongside the game’s core mechanics – puzzles, platforming, combat – but in Jazzpunk the comedy essentially is the game. Each level is packed with people to talk to, objects to interact with, and scripted scenes to stumble upon. The vast majority have nothing to do with the main objective. You might be tasked with infiltrating the Soviet embassy, but spend an hour just wandering around outside seeing what shenanigans you can dredge up. You might walk up to someone on the street only to find that they have a pull string on their back that makes them spout warm, fuzzy greeting card platitudes. You might talk to someone else only to watch them get carried away by a flock of pigeons and dropped from the sky. You might come across a robotic sex worker who speaks in puns relating to 1980s-era computer tech. You might find a crab who speaks to you in sensual, husky Spanish. You might find a computer inside a pizza box containing a zombie-slaying minigame. (Actually, you will find all of those things.) 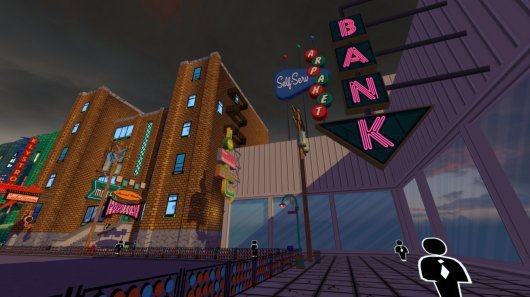 Fortunately, the game has impeccable comic timing, punctuating gags with sublimely stupid sound effects and animations, never letting a joke or scene go on longer than it should. Before you ever come close to getting the chance to ponder if a certain joke was shallow or too easy or if it overstayed its welcome, Jazzpunk has already shoved you along to something else equally off-the-wall. It veers between sharp wit and Saturday morning cartoon slapstick with ease.

Nearly every one of the numerous NPCs in the game has several short lines of dialogue comprised of about a 90-10 split between jokes and exposition. There are no dialogue trees, as Polyblank never utters a word, but running up to everyone you see and mashing the interact button until they start repeating themselves is one of the great joys of the game. All dialogue is fully voiced in a manner reminiscent of recent Nintendo games: every line has been altered to sound as if you are fast-forwarding on a cassette tape. Subtitles hover in front of the characters like a signboard. Even these get played for laughs: in most cases, the subtitles differ slightly from the spoken dialogue, but sometimes the subtitles are wildly different or even contradictory. It reminded me of the old LucasArts gag of having the character say something completely different than the dialogue choice you had selected, which is as funny now as it was then.

The sound effects and music are in on the joke too. I haven’t heard this many squish noises outside of old Nickelodeon cartoons. Everything in this game seems to squish, splatter, fart, or explode. I kept waiting for it to stop being funny every time I sat on a whoopee cushion or caused a hobo to pass gas and it didn’t. My inner 7-year-old was having the time of his life. And the music! The soundtrack is fantastic, a smorgasbord of ‘60s jazz, swanky spy movie music, and off-kilter noise. Music is often tied to small sections of a level, meaning that songs fade in and out, transitioning between genres as you walk around, adding to the hallucinatory mood of the game. 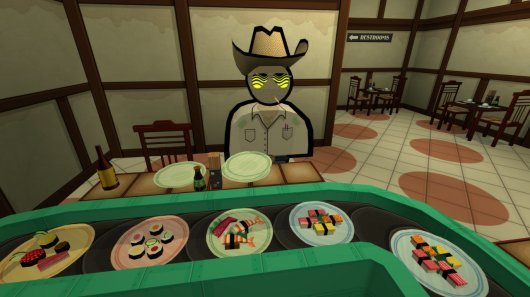 While the graphics are technically simple, with blocky low-poly models and flat lighting, there’s no shortage of charm and variety to the environments. There are dozens of NPC models, and each of those has a number of variations. Unique signage and environmental details abound. Approach a street food vendor on the streets of the Japan mission and you’ll be able to read over the game’s menu (hope you like Miso Sphincter). The Director’s waiting room has a table of magazines that can be examined, each of which has a custom cover graphic chock full of the game’s signature bizarro humor.

The actual gameplay is quite light. You move around the world in first-person, walking up to things and pressing ‘E’ to interact. Occasionally you’ll get an item that can be used with the left-mouse button, and if you have multiple items, you can scroll through them with the mouse wheel. That’s basically it. There are a few simple puzzles, but nothing intended to really stretch the mind. Mission objectives are obvious and easily accomplished. There’s no challenge to be found here – because that’s not the point. The game itself is just a skeleton to support the jokes, and that’s fine. 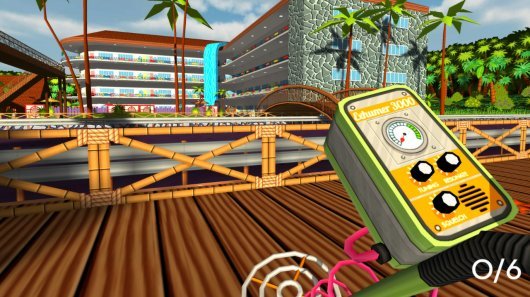 The plot is similarly light. You’ve got Polyblank, who is, as his name suggests, a blank slate with no backstory, no personality (except for a penchant for prodding everything in sight with his fingers), and no voice. There’s The Director and his receptionist, a Big Bad villain, and a couple of other minor recurring characters, all of which are drawn in broad strokes. There seems to be little rhyme or reason for anyone’s actions, and while there is a three-act structure to the plot that builds toward a relatively more intense climax, it hardly qualifies as thrilling or suspenseful. Once again, that’s not the point. The plot exists to take you from locale to wacky locale so that you can walk around and enjoy a bunch of jokes for about three hours.

I’ll admit that, as funny as the game can be, the lack of narrative drive, consistency, or pathos means there’s a sort of hard limit to the engagement one can get out of it. I found myself wishing that the developers had provided just a bit more to hook onto narratively, the way that the masters of comedy adventure games often did. Even in the most absurd LucasArts adventures, for example, there was a sense of history, context, and character. That’s missing here, making my experience with Jazzpunk more akin to a particularly good session of surfing funny pictures on Reddit. I smiled frequently, I laughed out loud a bunch, I told a few friends about some of the parts I found particularly funny, and then I kind of forgot about the game and moved on.

On some level, though, complaining about a lack of substance in a game like this is like criticizing Mad Magazine for its dearth of biting social critique. All ye looking for narrative or mechanical depth, abandon all hope, as this is a game of quick, cheap, dumb laughs. I don’t mean that as a knock. I had a great time in Polyblank’s shoes.  Jazzpunk knows exactly what it wants to be and succeeds at being that. Sound like fun? Then pull on your trench coat, holster your whoopee cushion, and pop some Missionoyl™, ‘cause things are gonna get weird.

Games don’t come much goofier than this – Jazzpunk serves up nonstop, breathless absurdity, if not much else.

GAME INFO Jazzpunk is an adventure game by Necrophone Games released in 2014 for Mac, PC and Linux. It has a Stylized art style, presented in Realtime 3D and is played in a First-Person perspective. You can download Jazzpunk from: We get a small commission from any game you buy through these links.
The Good:
The Bad:
The Good:
The Bad:

What our readers think of Jazzpunk