Review for Journey of a Roach

We get a small commission from any books sold.
Written by
Randall Rigdon — November 22, 2013

At first glance, Journey of a Roach’s title had me envisioning an adventure along the lines of Bad Mojo, where insectile characters in grimy environments would provide an alternate perspective of a world littered with gross-out, cringe-worthy imagery. Instead, this game proves to be anything but, as its roach concept is grounds for some charmingly innovative gameplay in a surprisingly heartwarming universe, though this cheerful journey is over all too soon.

The game’s premise is as simple as its execution, quickly dropping players into a scribbly-drawn, post-apocalyptic wasteland, without much needed explanation of when or how the world actually got to this state. The opening anthropomorphic character scurrying across the lifeless debris is, after all, just a nameless cockroach, the human-caused destruction playing no significance in his existence.

However, things soon escalate – or rather descend – as the youngling roach hurries toward a glimpse of rare vegetation in the distance but immediately stumbles into a pit and gets pinned under a barrel of waste. The perspective then shifts to reveal yet another childlike roach, waking in his comfy-looking underground abode at the sound of the crash. He is the game's main character, the only roach or entity that is actually playable, and here is where the adventure begins in earnest. 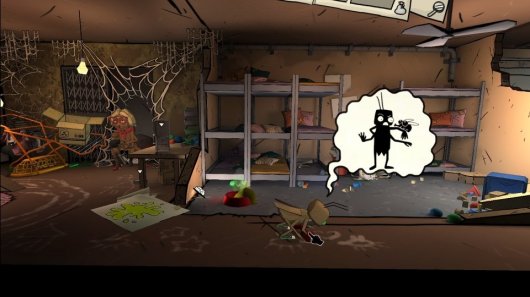 After you manage to rescue your cohort from his distressing entrapment, the two cockroaches instantly become best friends and set forth on a journey to get to the surface together. One would think this would be a relatively easy task of simply climbing back up a hole, but an endless succession of unfortunate and ill-timed circumstances force our characters further and further underground instead. Along the way they run into a series of oddball characters, including an insane, treasure-hungry rat and a group of peg-legged gambling grasshoppers, all hidden within a world controlled by experimenting ants brimming with plans of conspiracy and deep corruption.

Exploration is everything in this adventure. The core gameplay is entirely centered around (and fully utilizes) the fact that you’re a cockroach. Every surface in every room in every environment is fully traversable, unless immediately obstructed for one reason or another. Walk into a wall and your perspective fluidly rotates 90 degrees, quickly revealing the wall to be another avenue of discovery. Climb over to the ceiling from the wall and again the game’s entire perspective will flip, as even standing on the ceiling reveals an entirely new "room" to explore.

This gameplay twist is integrated into a fairly traditional model of classic adventuring, so you’ll find yourself working through familiar types of puzzling from the LucasArts era, but with an entirely new level of depth. You’ll encounter conventional inventory obstacles one room at a time, but they must be approached from every angle and perspective, using the floor, walls, ceiling, and the relationship between the three realms in order to cleverly advance through each setting. 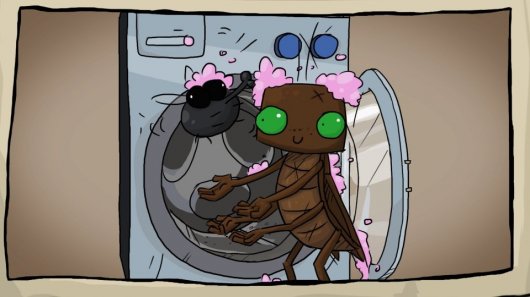 To illustrate, in one scene you'll enter a musty basement cellar where an old belligerent bee wallows in depression about the lack of revolt within this militant, ant-driven community. The atmosphere is morose and grim, to say the least. However, make your way to the ceiling and your new orientation will reveal a bohemian lightning bug nestled in a hammock, chilling out to some Rastafarian ambience. The mood smoothly becomes lighthearted and uplifting, the music and lighting full of warmth and charisma. The same wretched dreariness of your initial encounter remains in the same room, only now it exists far above your head.

Alas, the firefly is fast asleep and this little bugger has to be awoken. By flipping back and forth between the warm ceiling atmosphere and the cold basement floor, you will eventually find a way to rouse him from his slumber on the ceiling through accomplishing other objectives on the floor first. This is one of the simpler executions of the game's topsy-turvy mechanics, but it's an example of how any given room's multiple dimensions are imperative to advancing the journey.

Unfortunately, Journey of a Roach sometimes feels like little more than a tech demo for its few inventive novelties rather than a full-fledged adventure, clocking in at only about three hours or so. However, its brevity and lack of substance are mostly forgiven because the heartwarming world and characters are so enchanting that the game feels like a simple storybook come to life. The cel-shaded art design, executed through beautiful comic-style graphics, allows for a large number of lovable character models, such as a flapper-styled grasshopper that only wants to dance for her sparsely attended bar and an elderly spider-lady who's overly protective of her grandbabies. I marveled at how cute and adorable the artists were able to portray fly larvae. 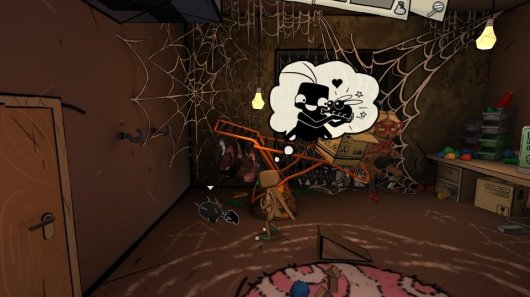 
The main character and his fellow cockroach buddy are instantly likable characters in their joyously childlike innocence, never fully sure of what’s going on and always energetic in their reactions without ever actually speaking a discernible word. All the insects communicate through garbled sounds of gibberish, each distinctive enough to convey a multitude of delightfully different personas. The nameless protagonist carries himself with such youthful nonchalance that his third set of legs are perpetually crossed across his waist, as if to constantly communicate “well, now what?” His counterpart is unfortunately caught in a never-ending state of lucklessness, yelping and pleading for help as he stumbles into yet another trap, getting himself into more and more hazards for you to rescue him from.

Although the backdrop of this story involves the end of the world as we know it, the gameplay takes place entirely in well-inhabited and intricately interconnected underground chambers. This world is bright and colorful, but it's still a perilous setting where our lead characters are threatened by hungry spidery creatures and even face the evil oppressive ants whose regime of control and order includes torturous experiments and malicious ritual practices. 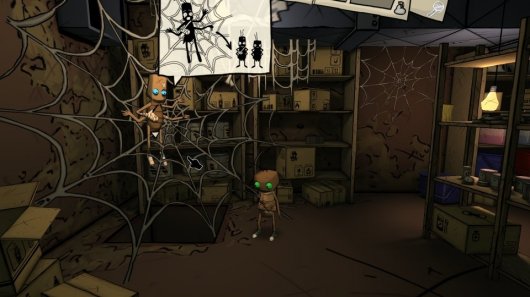 While these may sound like intense subjects, the seemingly treacherous characters and the dangers they pose are always portrayed lightheartedly, where getting past an enemy ant requires the use of quacking rubber ducks and having to rescue your friend from a giant spiderweb requires the use of a contraption devised from a toilet-plunger. Other humorous situations involve rescuing a character from a washing machine, as well as hilariously obtaining an item through the unintentional mutation of a tiny fish, the outcome of which managed to make me laugh out loud.

A lot of the narrative-progressing moments are portrayed through hand-drawn cinematics. Although these retain the same joyous atmosphere as the rest of the game, their Flash-styled scribblings and sloppy execution at times conflict with the sharp, clean stylings of the in-game visuals. The graphics in both formats are vibrantly cartoony, but the game itself is much crisper and more neatly detailed than the intentionally rushed-looking cutscenes. Since these cinematics are triggered on a regular basis, however, the initially jarring impact of the conflicting styles begins to diminish over time.

Even with this contrast in styles, the animation frequently adds to the overall charm. When scrolling over items in your inventory, for instance, little cartoon bubblings impose themselves over each item and reveal fragments of our main hero’s imagination and desires, typically revealing what he would actually do with the item if the moment allowed. For example, when highlighting a feather boa, he envisions himself rolling around and getting tangled up in it like a cat who’s discovered disposed-of wrapping paper on the floor on Christmas morning. Similarly, a scarf has him picturing himself standing proudly in the wind wearing an aviator’s cap. It’s little snippets like these that consistently enchant this wonderful little world. 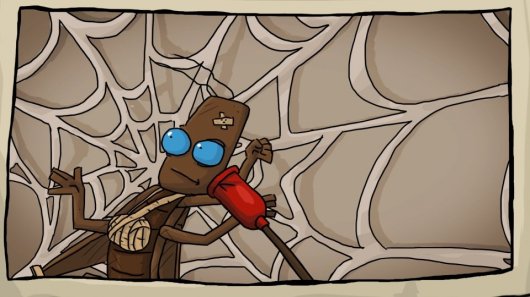 While the game’s endearing art style makes it hard to turn away from, that's not its only strength. The atmosphere is immersive, and while the characters lack any formalized dialogue, the exceptional sound design and fun musical backdrops add to the overall feel. Although the soundtrack doesn't ever jump out at you, its presence adds thoroughly to the joyous and quirky spirit that makes this adventure remarkably captivating.

The interface smoothly utilizes both the 3D navigational control scheme of the keyboard and the classical point-and-click sensibility of the mouse. Players walk around using the keyboard, and when in close enough proximity to an interactive element, a single mouse click either delivers an observation of the object in question or picks it up to store it in the inventory atop the screen. As with all standard inventory-based puzzlers, clicking an object in inventory allows you to equip it and then use it with the corresponding environmental pieces or combine it with other inventory objects. Using them on other characters usually results in hilarious talk bubble responses.

Journey of a Roach bypasses a lot of the discouraging busywork of typical adventure games. You won't be running back and forth to create assorted combinations of random inventory items or solving cryptic hieroglyphs or navigating convoluted dialogue trees – though the game does touch on several such elements. Mostly you'll be solving rather simple but logical puzzles that always manage to be fun. None of them are exceptionally hard, but the perspective-shifting adds a welcome level of depth. You don't need to think outside the box so much as keep in mind that the box has a top, bottom, and sides to consider. This focus on exploration and creative thinking over complex puzzle solutions makes the game far more accessible to genre newcomers, effectively eliminating the need for a hint system or hotspot highlighter.

Despite its short length (which is blatantly highlighted by an achievement for completing the game within 18 minutes), Journey of a Roach features an immersive cartoon world inhabited by lovable insect characters and mind-bending directional mechanics that will surely resonate with players long after the game is over. In fact, as I finish writing this review, I'm determined to go back right now and try to snag that speed run achievement and recapture this adventure’s endearing charm once again.

It’s rather short in length and lacks much story substance, but Journey of a Roach is a charming, original adventure that genre fans and newcomers alike will enjoy.

GAME INFO Journey of a Roach is an adventure game by Koboldgames released in 2013 for Mac and PC. It has a Stylized art style, presented in Realtime 3D and is played in a Third-Person perspective.