We get a small commission from any books sold.
All Bitmap Books
Written by
Merlina McGovern — January 15, 2014

What if instead of stepping through the looking glass, Alice fell through a stylish ‘60s-style mirror into a topsy-turvy world full of talking dolls, mysterious strangers, and intricate puzzles? Simogo, the indie creators of Year Walk, have created just such a scenario in their new iOS adventure game DEVICE 6, an interactive text mystery with unique mechanics that will have you reading, puzzling, swiping, and turning the phone around as you play. It’s every bit as odd as it sounds, but it features fun and challenging puzzles, even if its story and gameplay never quite adhere together as well as they should.

You meet Anna as she awakes in a room that doesn't seem to be the same one promised to her by her landlady… Wait. Let's back up a bit. You'll actually start the game as you, the player (in my case, I was Player249). You'll be asked to do a variety of things to "test your engagement" with Device 6 (though you’re never really given any understandable explanation for what this device actually is) before being introduced to Anna, and then again at the end of each chapter. This includes holding the phone in front of your face for a "scan," answering a number of multiple choice questions such as what shape you think a particular chapter is, and stumbling across instructions not related to Anna's adventure, such as notes pointing to previous devices ("read the Device 4 manual for important information about electromagnetic waves."). Though the interruptions can be fun, I didn't really see that doing any of these things actually gathered information or changed my gameplay in any way.

But back to the story proper. Anna's exploration through such locations as a tower, a garden, and a lighthouse are revealed to you via text. As she investigates and attempts to escape her environs, you'll read through the text and swipe to read further. Traveling further into the looking glass, however, the text begins to slip sideways and swirl around as Anna traipses down staircases, or it will move up vertically as she discovers new paths. You'll even need to find a new way of looking at the text to make sense of its strange presentation at times. Though the story is told in the third-person, Anna's thoughts intrude into the narrative as side text throughout the story, letting you know that she's desperately hungry or hates the music that's playing. Outside of these small asides, however, you won't really get much more insight into Anna's motivations or her background. Little clues let you know that she is not exactly safe or anywhere close to the normal reality she remembers before falling asleep: An animatronic bear repeats the phrase, "I don't know who to trust anymore," and barnyard animal parts make inglorious entrances into delicious dessert treats. 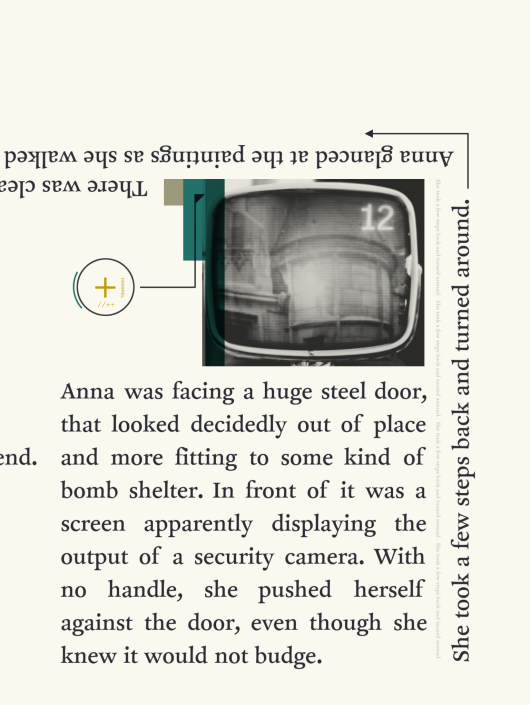 While most of the story is revealed through text, there are photos interspersed throughout. I played this on my iPhone, so the images were small as they shared space with text. Some of these images, like a stern-looking elephant wearing a bowler hat, are static. Others change as you swipe across the screen, making it appear as though you are moving past an open window. You’ll also stumble across schematic drawings and watch as lines and circles grow and move across the screen as you solve puzzles, sometimes indicating where you should read next. Some images have interactive elements where you can tap the screen to enter codes and attempt to open locked doors. You’ll encounter more than just doors to interact with, however, as one object that screamed long and loud (literally) when I pressed it can attest to.

Unfortunately, you won't always know what to do with these interactive elements the first time you come across them. Once you've reached the end of a chapter and figured out how to solve a puzzle, you'll need to backtrack (including scrolling sideways and turning your phone around and around) to get back to the interactive hotspot. This becomes especially challenging because the text branches in multiple, nonlinear ways, so at times I found myself scrolling all the way to the right only to realize that the hotspot was actually all the way to the left. It would have helped if the developers had come up with a more seamless way of interacting with elements sitting far apart from each other on the written screen.

One nice immersive element is that you won't be doing all of this reading in silence. As you swipe across the screen you'll hear footsteps, the sound of a man shouting at you from the bottom of a well, a door slowly creaking open, a crowded hall full of plates clinking and people talking. Various revelations that Anna experiences in the text are often accompanied by background music suddenly sounding, providing an additional layer of tension. And you'll need to pay attention to the various recordings that you hear, whether it's the sound of a voice coming out of a stuffed bear or a tinny recording played in a room full of mannequins sitting down to dinner. You'll also get odd musical interludes like a hopped up, synthesized "Flight of the Valkyries." 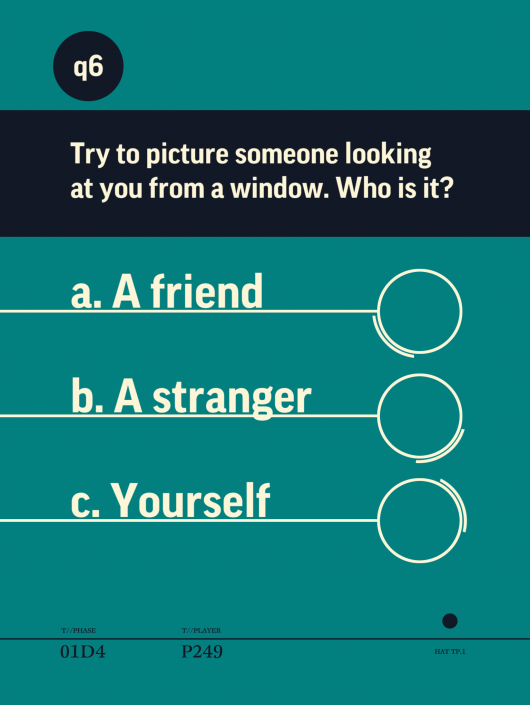 It should go without saying in an adventure that as you explore, you'll need to carefully observe everything you discover. Whether it's a small detail in a photo or a description of a group of people, often the codes you'll need to crack require either a good memory or great note-taking skills or even a little math (as well as patience as you scroll back through the text to reread a section or re-examine an image). The absurd nature of this alternate reality makes it all the more challenging, as almost everything you encounter is abnormal and could be clue. Did I need to pay heed to that priest with a gramophone for a head? How about those random schematics that appear with phrases like "present tense to past translation output"?

The game is broken up into six chapters, five of which require you to solve large, multilayered puzzles as you aid Anna in searching for a way out of this surreal nightmare. Anna’s experiences become more bizarre – from waking up at what appears to be her own funeral, to finding herself in a dark woods surrounded by a flock of screaming, shrieking sheep, to sitting in a theater with a man singing a single song over and over again – and she becomes increasingly angered at whatever mysterious entity might be putting her through all of these tests.

The feeling of being tested is further amplified by all of the puzzles you encounter. There are no inventory puzzles, although you will pick up a mask at one point that will alter how you see your environment when you put it on. This particular puzzle involves remembering items that you encounter both with your mask on and with it off. As you progress further into the game, the puzzles become more convoluted. It got to the point for me that I was so busy going back and forth trying to remember what details were simply part of the story and which were clues for puzzles that I often lost the flow of the story entirely. 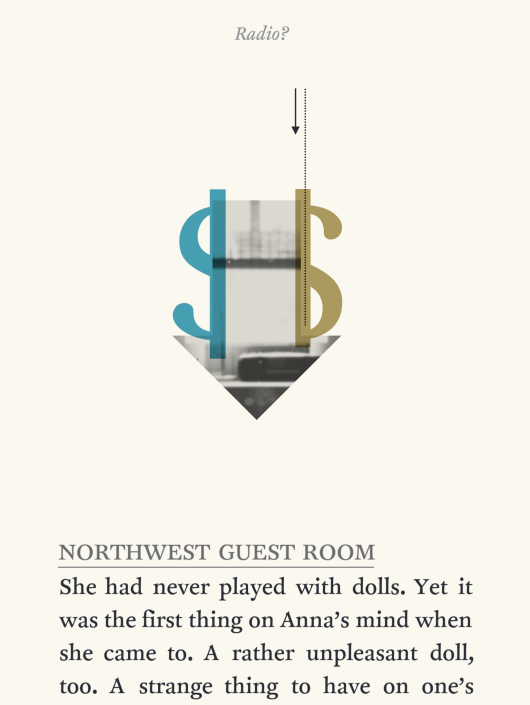 During my two hours of playing time, I ultimately stopped trying to make too much sense of a tale that had Lord Nelson, Napoleon, and General Custer all sitting at the same table, and I did what Anna did as she "calmed down and giggled at the absurdity of it all." I did enjoy the intricate puzzles and the general sense of oddness and menace that the game conveyed. The novel interaction between you, the text, and the images was a nice break from your typical text adventure or casual gaming experience. However, the need to constantly scroll back and forth made the overall presentation disjointed, lacking in immersion, and at times just plain annoying. A more visual presentation could have made the backtracking feel much more like you were exploring a physical space. As it was, I felt as if I were rewinding a bit of tape, which is hardly the best solution for keeping the flow of a story going in this, the digital age.

I never really did understand why Anna was locked in this dreamlike prison full of locked puzzles and codes the first time I played through, and I found it hard to see what her experiences had to do with my own experiences as Player249. My scrolling back and forth and feverish puzzle-solving the first go-round made Anna’s descent into an increasingly nonsensical and dangerous world seem like one large jumble of surreal scenarios. Reading through the story a second time without worrying about finding puzzle clues allowed me to piece together the larger narrative in addition to enjoying each chapter on its own bizarre terms. For me, being unable to fully appreciate the larger story during my first playthrough made me feel like the developers were just on the brink of achieving a truly awesome interactive experience but didn’t quite make it. As it is, DEVICE 6 is certainly an interesting entry into the iOS adventure realm, but could have used some better integration of story and puzzling. Perhaps it would make a little more sense with a Device 7 upgrade.

If you’re looking for some absurdly fun puzzles and a truly unique storytelling experience, you’ll want to check out DEVICE 6 on iOS, but you’ll wish for a gameplay integration upgrade.

GAME INFO DEVICE 6 is an adventure game by Simogo released in 2013 for iPad. It has a Illustrated realism style, presented in Illustrated text and is played in a perspective.

What our readers think of DEVICE 6