Detective Grimoire: Secret of the Swamp  (2014)

Detective Grimoire was developed, as many adventure games are these days, with the funding of a successful Kickstarter campaign. It’s the spiritual sequel to a free Flash game by the same name released several years ago. In this much more ambitious commercial follow-up, you play as the young, eponymous detective who is trusted with the murder case of Remington, the owner of a bizarre tourist attraction in a swamp themed around a monster named Boggy from an old cartoon. The place is full of eccentric characters, beautiful sights and a dark, secret history, setting a unique stage for some pretty original gameplay mechanics and a lighthearted, entertaining mystery.

The gameplay follows in the footsteps of series like Ace Attorney and Professor Layton. In this first-person experience, you move from one scene to another looking for evidence related to the case and interacting with characters. You navigate by pressing the “move” button in the bottom corner of the screen on touch devices or using the arrow keys on desktop platforms. You can also fast travel to any location using the map in the upper right corner of the screen, which comes pretty handy. By clicking/touching on relevant objects in the environments or obtaining key information through interrogation, Grimoire updates suspects, clues, and notes in his journal, which is accessible at any time.

The suspect section contains all the characters you’ve met that Grimoire deems as such (which is seven out of the nine NPCs). By accessing each person’s profile, you can have a look at their occupation, a memorable quote, and up to eight facts that you progressively unlock about each person. You can tag each of these facts as “suspicious” or “not suspicious”, which changes the respective character’s suspiciousness gauge for management purposes. It’s a nifty feature that I wish had some kind of impact on the game, but it doesn’t seem to accomplish anything other than to help you organize your ideas. In the end, all the clues you collect pretty much lead Grimoire to identify the murderer, so it’s not like you get the chance to go wrong. 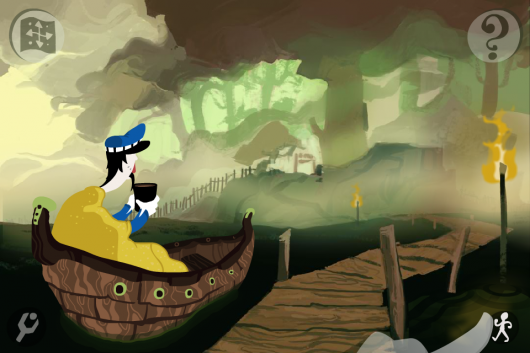 The clues window is an inventory of any relevant objects that you’ve found. Clues are obtained through observation but can also be given to you by other characters. Although you can’t “use” these objects in the traditional way, you can present them to suspects to get more information about the case or the items themselves. Any new piece of information about the object can be accessed in the clues menu by clicking on each one. Clues are also divided into categories, such as those relating to the crime scene.

Notes record comments about anything of interest in each location of Boggy’s Bog, with keywords in different colors to offer hints about important or out-of-the-ordinary things that should be investigated further. Notes are unlocked mostly via conversation, but also by looking at everything in each scene.

Each of these journal categories displays a percentage that measures how far you’ve progressed. It’s possible to finish the game without 100% progression in each, but completion is very easy to achieve if you’re being thorough. 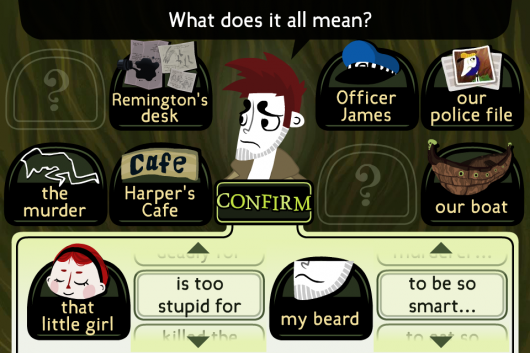 Conversation with characters is mainly initialized by topics, which are standard for all suspects. Two are unlocked at the beginning of the game: “Your Job”, which gets you information about the person’s frequently-unusual profession, and “Last Night”, which prompts Grimoire to ask what they were doing the night of the murder. Thanks to its colorful cast, Grimoire’s wittiness and the top-notch voice acting, the dialogue is frequently hilarious and always enjoyable. It reminded me of the humor in old LucasArts adventures, and it’s superbly executed.

You can present to characters any clue in your inventory or other suspects’ profiles. Sometimes the person will have something essential to say that will point you in the right direction, like indicating how certain objects are related to the victim’s murder; other times they’ll just make a remark for pure flavor, like the apathetic shop clerk Sally Spears talking about the souvenirs she sells. Sometimes they’ll simply express that they don’t have anything to say about that item or person in particular. I found it slightly frustrating on occasion when a suspect didn’t have a comment about something that common sense suggested they must have some opinion on. Considering the small size of the cast, it seems unreasonable that, for example, the Chef of Boggy’s Bog doesn’t have anything to add about Sally, who works just down the road. It isn’t limiting to the overall mystery, but it does feel odd.

After enough clues or certain pieces of evidence have been gathered, a challenge interrogation for a suspect is unlocked. These represent the most important interaction you can have with that character, as they pertain to their potential motives for the murder. Completing the challenge involves either selecting the right conversation options or accusations, solving a puzzle, or a mix of both. In one of the challenges, Grimoire must complete a sketch in his notebook to conclude how the pretentious filmmaker Van de Peer managed to get permission to film in the swamp, which has been a protected area for several years. You do this by dragging one of several items he may have given to the owner of Boggy’s Bog to push his agenda onto Grimoire’s sketch, which then completes the drawing. If you get the wrong object, you can retry as many times as you want. It’s simply a graphical representation of a normal dialogue exchange, but fits the gameplay around Grimoire’s journal. 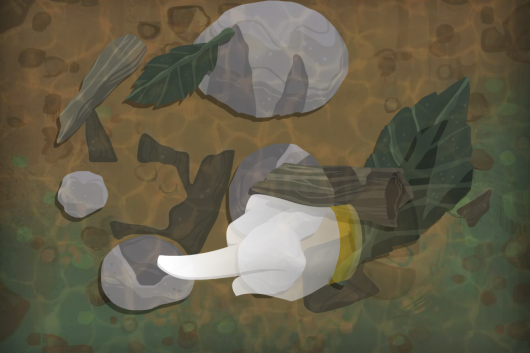 
Solving many of the puzzles involves simple touch mechanics, but the puzzle design is unfortunately not on par with the rest of the game. The tablet-focused design becomes very apparent on PCs, where tasks that revolve around clicking and dragging objects seem out of place, losing much of their charm once the tangible finger interaction is removed.

Most obstacles belong in one of two categories: those where you must reveal something that’s buried behind other items by dragging these items away, or connection puzzles where you must attach pieces of an object together in a logical way. The distinctive touch quality of these activities may turn off some gamers, but the difficulty seems to be aimed at kids and can generally be solved on the first go. Some puzzles are missed opportunities. For instance, there is this chemistry set that you must use several times in combination with various objects. I love chemistry puzzles, but in this case you only combine two items to create a color that matches the liquid you’re using the set with. That isn’t too bad, but at every opportunity you’ll always try to obtain the same color, which defeats the purpose of having the puzzle more than once. 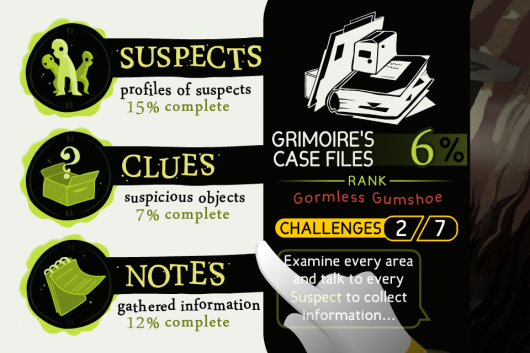 Perhaps the most original aspect of the game is its “claims” mechanic. When Grimoire is puzzled about a recent discovery, he will try to assert a logical conclusion about it. You do this by dragging two stray thoughts from a list given to you into slots at the bottom of the screen, then flicking through connecting statements in between to form the right sentence. Having Grimoire say a different, often absurd combination is hilarious and has no consequence other than asking you to try again – after pointing out how stupid that idea was, of course.

For instance, when pondering what’s odd about Boggy’s Bog, you could combine “my beard” and “my hat” with the connectives “isn’t warm enough for” and “to murder someone”. The final sentence would be: “my beard isn’t warm enough for my hat to murder someone”. Which… makes absolutely no sense. Although you’ll notice that the writers have a healthy obsession with magnificent beards, which I must applaud. Bravo! The right answer, obviously, is much more reasonable, and when you get it right, the game progresses and some new topic or challenge is unlocked.

When I saw early screenshots of the game, I was hesitant about the art, which reminded me of the humble Flash origins of the game it’s based upon. After playing the sequel, however, all my concerns were dispelled. Detective Grimoire avoids a pure visual novel feel by constantly animating its characters and environments. Nothing is completely static, no matter where you go. Whether it’s flitting fireflies, mysterious mist, the moving sails of a boat or the various suspects performing subtle movements in the background, it all helps Boggy’s Bog feel very much alive. During conversations, each character has a set of fluid animations that represent their vibrant personalities. 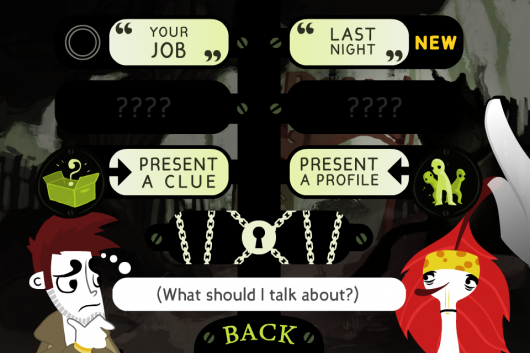 The backdrops are all hand-painted with beautiful but rough strokes and a lovely attention to detail. There’s also a wonderful coherence between the characters and the scenes in which they’re located. For instance, Sally’s green hair is a perfect match for the greenish roof of her shop and the bright green trees in the swamp behind her. So is the brown shirt of cameraman Bobby Burle, which blends well with the overhang beside him. I also loved how the character designs are actually relevant to their roles. The botanist Lady Weybridge has long red hair shaped like a big autumn leaf to reference her profession. These are nice details that really elevate the quality of the presentation.

So does the exquisite and evocative soundtrack. There’s a reason the game strongly recommends players to use headphones. The music fits perfectly with the magical but eerie feeling behind the Boggy’s Bog case, and its accompanying vocals are a nice touch. Some of the songs loop continuously in many locations but I never got tired of them, as the instrument variety and multi-layered compositions are a joy to listen to. The rest of the sound effects are low-key enough not to distract you from the experience but set the mood appropriately. The jewel in the audio department is the voice acting; I can’t imagine this game without it. Grimoire’s lines are filled with so many intonations and emotions that only quality voice acting could properly convey them all. The Kickstarter campaign was partly created to pay the cast, and I’m glad the developers were able to reward these talented indie actors.

Though its puzzles are fairly disappointing, Detective Grimoire excels in almost everything else, and does so with a unique flare that sets it apart from its contemporaries in the investigation sub-genre. It’s only a 2-3 hour experience, but it’s time well spent with this funny, intriguing and charming game that’s packed with so much personality that you’ll be left wanting more.

Detective Grimoire breathes some new life into the investigation/visual novel sub-genre with its compelling setting, characters and humour, undermined only by puzzles that are nowhere as enjoyable as the rest of the game.

GAME INFO Detective Grimoire: Secret of the Swamp is an adventure game by SFB Games released in 2014 for Android, iPad, Linux, Mac and PC. It has a Stylized art style, presented in Slideshow and is played in a First-Person perspective. 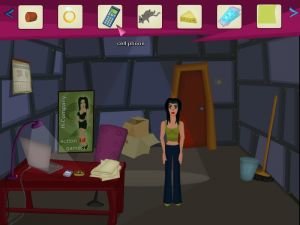 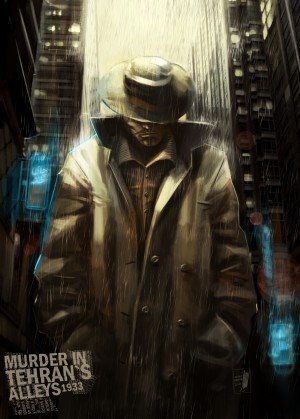 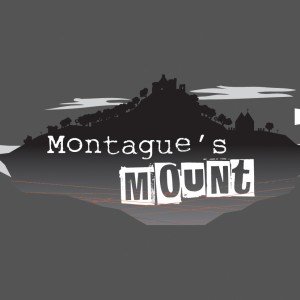 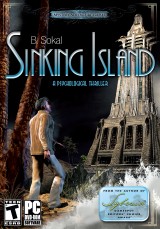