Almost a decade ago, a revolutionary adventure game was released for the PlayStation 2 called Ico. The game was praised for its atmospheric design, elegant art direction and the dynamics between its two leads. It is often regarded, along with its spiritual successor Shadow of the Colossus, as a fundamental example of video games as art form. It should come to no surprise that rain shares many of the same qualities as these titles, as all three were developed by SCE Japan Studio. But what the developers accomplished through minimalistic narrative and breathtaking environments in previous entries is somewhat lost in this game's all-too-self-conscious attempt to imitate the ethereal and poetic beauty of its predecessors.

In rain, you play as a boy who wakes up to see a strangely translucent girl through his window, running away from a menacing figure through a portal. Curious to see where it leads, the boy follows them into a dark alternate dimension of his own Italian town. There he discovers that, like the mysterious characters he pursued, only his silhouette can be seen under the never-ending rain in this world. More importantly, they are all completely invisible when protected by the elements. This ability will prove useful in his quest to find the girl and get back home, as they will encounter nightmarish beasts that won’t hesitate to attack them on sight.

The game plays more like a stealth-platformer than a traditional adventure, as half of the time you’re sneaking beneath roofs and bridges to avoid being spotted and the other half you’re running towards the girl or an exit with some spooky monster on your tail. You examine and interact with objects (opening doors, picking up keys, etc.) with a single button, jump with another and move around with the thumbstick. Ideally you’ll evade the creatures entirely – which appear as many types of animalistic polygonal skeletons – by never making noise and by staying under cover when they are around. 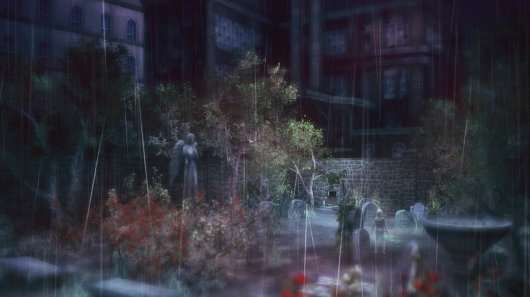 There’s no on-screen interface in the game, and the only visual feedback you get is certain spots being illuminated if they can set you on the right path. This minimalist approach is very appropriate, as rain is the kind of experience that is meant to be enjoyed by exploration and as few distractions as possible to pull you out of the immersion. If you do get lost for quite a while, the option to press SELECT for a hint shows up, but most of the time this will not be necessary.

As you traverse these (almost) desolate streets and alleys, you’ll encounter some simple puzzles to overcome obstacles and survive, but in general these are quite unimaginative. They are slightly better when they converge with the story, usually during the more cooperative efforts between you and the girl, whether by acting as a decoy for enemies while she safely reaches her destination or activating monster traps with the proper timing. Most of the time, however, you’ll just be trying to find a way out of places whose exits are arbitrarily blocked by fallen debris and such, and the requisite object-pushing and ladder-climbing solutions quickly become repetitive. Sometimes interesting new mechanics are introduced, like puddles that leave tracks if you step in them, but they are scarcely reused and not in very creative ways.

For a five-hour experience, I felt like I spent way too much time having to chase the enigmatic girl when we were forcibly separated by the most random events. Since the two children are united early on, the forced separations feel like deliberate attempts to stretch play time several times, even though you quickly realize that the main conflict involves something else entirely. Mind you, such obstacles can be justified by the surreal nature of this alternate world, since it’s implied that there is much more going on in these scenarios than first meets the eye. 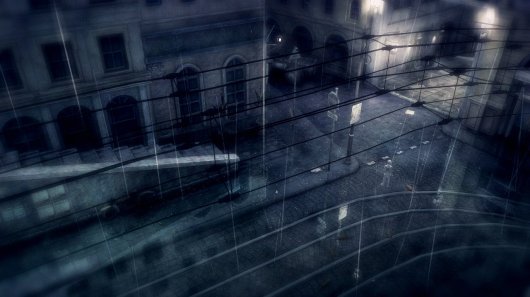 The best part of this game is its core thematic idea. This is the story of two innocent kids struggling against the unknown together, the only weapon at their disposal being to make themselves neither seen nor heard – much like thousands of bullied children around the world who struggle to balance their sanity and well-being mostly in darkness and silence. That’s what makes the story so hopeful when they find each other and so terrifying when they get lost again. As the game progresses, their homesickness starts to become apparent and you get the sense that they’ll be forever trapped in this hell with no explanation whatsoever as to what they’ve done to deserve such a fate. The contrasting instances of absolute desperation and wishful thinking make for the most touching moments in this adventure.

It really is a beautiful concept but one that doesn’t get executed as gracefully as it could. First, I had a problem with its expository presentation. Gameplay in rain is interspersed with text that blends directly into the environment, describing the events you’re currently experiencing and sometimes what's happening in the protagonists' minds. Words float between buildings, are printed on walls and lay on water. While stylish, this feels like an unnecessary and rather pedantic call for attention. If there was one thing the designers should have learned from Ico, it's that in games without character dialogue, pictures are worth a thousand words. Every time I died, mauled by a dreadful dog-like creature, I didn’t need the game to tell me that the “children were swallowed by darkness.” I could see the darkness swallowing them all by myself, thank you very much.

The other weakness that lets down the wonderful premise is that rain is a bland looking game. This is especially disappointing considering how evocative the imagery could have been in an Italian town frozen in time and trapped deep in despair, where hope for survival can be found only in the corners of its labyrinthine structure, under bleak circus tents or peaceful pachyderms' bellies, who roam around as remnants of a place that no longer exists. All of this, unfortunately, is presented with boring, stiff and often recycled 3D models. The kids themselves are not particularly nice to look at up close, with plain designs and little attention to detail in their translucent state. Generally there’s little movement on-screen other than the eponymous precipitation, and at times the game feels like an HD version of early PS2 titles. It’s not that rain is a bad looking game, it's just that its art direction is uninspired. With its seriously muted colour palette, the sense of no-place where life has been washed away is achieved, but beyond that I found the locations to be much too similar and unoriginal. 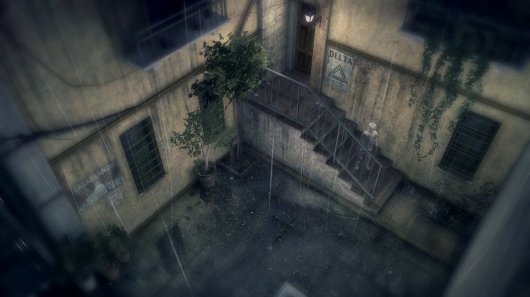 Fortunately, the music pushes the production back upwards. The main song is a poignant arrangement of “Clair de Lune” (Claude Debussy) by composer Yugo Kanno that still resonates with me long after finishing. In the more tense parts of the game, when enemies are closer than you'd like, Kanno’s score adapts to the suspense, pumping your heart with intense strings and disturbing silences. Then it smoothly fades back into softer piano tunes or eerie vintage circus songs. Simply put, the soundtrack is closest to the heart of what rain wants to communicate, and is a delight to listen to. It's crucial to the experience too, as you won’t be listening to many other sounds besides the rain, your footsteps and some unnerving growling.

Ultimately, rain is so preoccupied with being melancholy that it loses its way as a game. The reiterative structure and basic puzzles fail to connect with a story that desires to be an engrossing tale of childhood isolation, fear, and eventually trust. Sometimes it does manage to engage you on that level, particularly during certain heartbreaking cutscenes that let emotions leak through, but they are few and far between. The game even closes on a disappointing low note. After a couple of false endings, the tension starts to fall apart and the final conclusion is swift and predictable. Nevertheless, this is a unique endeavour that favours exploration and imagination over challenge, and if you go in with that understanding, it’s possible to overlook its flaws and connect with the delicate message that showers you gently throughout.

It has a wonderful premise, but rain too often neglects its gameplay in this otherwise honest, heartwarming tale of childhood solitude and trust.

GAME INFO rain is an adventure game by SCE JAPAN Studio and PlayStation C.A.M.P! and ACQUIRE Corp released in 2013 for PlayStation 3. It has a Stylized art style, presented in Realtime 3D and is played in a Third-Person perspective. You can download rain from: We get a small commission from any game you buy through these links.
The Good:
The Bad:
The Good:
The Bad:

What our readers think of rain