Sitting in the cramped border control office of a bureaucratic cold war state, an endless line of grim faces trudging by your armoured windows, may sound more like a concept for a dense Russian novel than a video game. However, indie designer Lucas Pope's strange, story-driven simulation-adventure Papers, Please manages to turn this seemingly drab experience into something utterly engaging and rewarding.

It does this by means of a charming and unique gameplay mechanic. You play as a newly appointed immigration officer in the fictional country of Arstotzka. As you sit behind your desk, each person steps out of the queue, into your booth, and presents their documents. Using your rulebook – and eventually other tools such as fingerprint and body scanners – you must crosscheck potential entrants and ensure everything is in order. This game of ‘spot the discrepancy’ becomes evermore complex, with rules that change daily according to government regulation, increasingly tricky types of documents, and the watchful eye of your superiors, who will hand you a citation for any and all mistakes. If you’ve played Phoenix Wright you’ll feel instantly comfortable with the premise of finding and presenting the right piece of information at the right time.

Fun with paperwork is just the beginning.  Once you’re comfortable with the gameplay, you’ll begin to encounter the stories behind the people you’re processing. Some are tragic, some are comical, some are simply bizarre, and there are a few plot threads that run throughout these vignettes. Soon you’ll be making choices with almost every person you meet, and it becomes apparent that your actions have consequences that stretch far beyond your tiny little booth. Political intrigue, clandestine orders, corrupt officials and human dramas weave themselves around your seemingly innocuous decisions. Do you take a citation in order to keep a family together? Will you take that bribe so you can buy medicine for your children? Do you trust a hooded conspirator enough to risk your life? Should you keep your supervisor sweet by bending the rules for his friend? 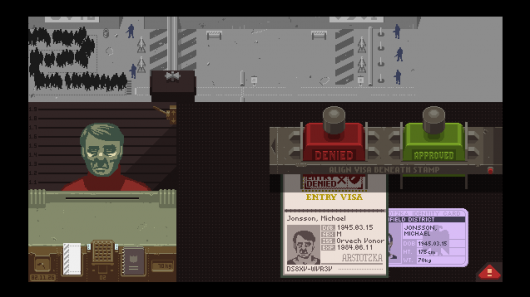 Rather early in the game, just as you are getting into the rhythmic process of arranging papers and scanning dates and names, an alarm sounds; the shutters of the booth drop shut with a clang, and the snaking queue outside your booth turns into a running mass as everybody scrambles away – someone has jumped the barrier and is running towards the guards. Pandemonium ensues. The summary screen appears telling you that the day was cut short due to a terrorist attack. Papers, Please is full of such deftly created surprises that get wilder and more dramatic as you play. Many are genuinely thrilling to encounter, and some even require you to step out of your comfort zone as a simple clerk. Despite being tied to your desk for the full duration of the game, there is an ever-present sense of an active world around you, with movements and machinations that can spontaneously disrupt your diligent work.

At times the game can even be rather profound with its scenarios. At the end of every day you are told what situation you and your family find themselves in. Too many citations at work and your pay will be docked, leaving them sick and hungry, putting you in the difficult position of making some rather tough decisions. Despite the financial rewards of performing your work duties correctly however, don’t be surprised to find yourself breaking the rules for no other reason than that you’re engaged with a particular character’s dilemma or situation. Nevertheless, it can be an even starker realisation to find yourself ‘just following orders’ to make things a little bit easier on yourself and your family.

What could have been a clumsy and frustrating exercise is made smooth and intuitive by a well-designed interface. Sweeping documents around your desk is pleasingly quick. All of your options such as fingerprint scans, calling guards, and highlighting discrepancies are conveniently arranged as pop-out buttons, and stamping passports feels just as conclusive as it probably does in reality. All of these actions are accompanied by satisfying swooshes and thumps that add weight and realism to your efforts. 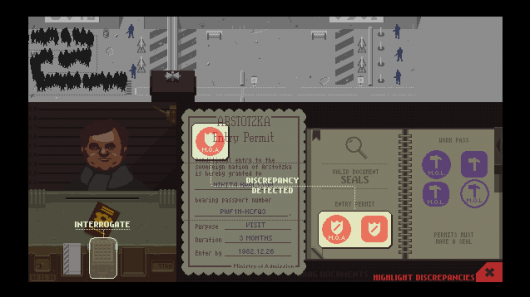 This goes some way to making up for the rather crude graphical style. Although Papers, Please is presented in flat, minimalist 2D, with drab, gritty, monochrome art that somewhat informs the Eastern Bloc setting and keeps the deluge of information clear, it is aesthetically that the limits of this one-man indie creation are most felt. Of course, there isn’t much to show apart from the clutter on your desk and the expressionless faces on the other side of it, but the rest of Papers, Please is so full of character that its lack of artistic ambition is a bit of a shame. Aside from some title screen music and the sounds of your paper pushing there’s a distinct lack of ambient noise, and story elements outside of central gameplay are mostly just depicted through simplistic images on black backgrounds. Instead of voice acting there are dull, compressed vocal grunts that accompany conversation which, while consistent with the oppressive atmosphere, could have used a little more variety.

Actual dialogue is minimal – efficient, rather than effective – and the overall story that unfolds is not particularly original or detailed, but the gameplay alone frequently serves up interesting concoctions of character desires and player choices. What begins as an addictive game of ‘spot the discrepancy’ quickly turns into an intricate balancing act of character relationships, government decrees, your family’s needs, and your own personal judgements.

It is this combination of allowing you choices, and presenting you with a tapestry of characters and stories – some more interesting than others, admittedly – that makes Papers, Please so thoroughly engrossing. There are some nice twists, and just when you feel you may have figured out the breadth of the game, another dimension is added to either the interface or narrative. Some may eventually find it a little repetitive to pedantically sift through documents, but excellent pacing and a vast array of surprises keep the gameplay from ever feeling too tediously similar. 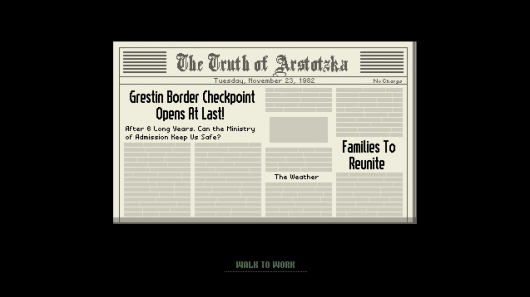 Multiple endings and different scenarios allow your choices to be fruitful, rather than merely superficial, giving the game substantial replay value in its four-hour story mode. (There’s also an endless mode once you complete a certain progression of the story mode). Particular decisions can even abruptly end the game sooner than its full 31 days, though such endings are just as valid, and a forgiving autosave system means you can jump back in at any point and replay your decisions, so seeing more than a few of the twenty endings isn’t as difficult as it sounds.

It’s certainly far from a traditional adventure, but with Papers, Please Lucas Pope has combined an enjoyably refreshing gameplay idea with story and characters that, while occasionally thin, combine to create a satisfying, rich whole. Don’t be deceived by its obtuse premise or its rudimentary art style – this is a well-designed and accessible game with enough scope and ambition to absorb you from beginning to end. Any adventure game fan willing to engage with its unconventional mechanics and pay attention to its subtle but varied details is sure to find something captivating about this cramped little border control booth.

Papers, Please is available at:

Papers, Please is anything but a standard adventure, but beneath the seemingly unappealing premise of bureaucratic drudgery and human misery lies a fascinating game of choices, surprises, and intrigue.

GAME INFO Papers, Please is an adventure game by Lucas Pope released in 2013 for Mac and PC. It has a Stylized art style, presented in Slideshow and is played in a First-Person perspective.