Review for The Mysterious Cities of Gold: Secret Paths

Ynnis Interactive has done so many things right artistically with The Mysterious Cities of Gold: Secret Paths that it’s a travesty that the actual experience of playing through the game is such an interminable chore. Based on a 1980s cartoon (originally aired in Japan and France ) that was recently revived for a new run in 2013, the game version of Mysterious Cities offers plenty of charm, brilliant art direction, emotive and fun music, and captures the innocence of its source material. The problem is that it’s simply no fun. This is an unapologetic puzzler, which would be fine except that there’s really only one type of puzzle to solve: a linear maze to be solved over, and over, and over, and over again. The maze may change geographic locations, the doors and levers may look slightly different, and the collectibles might be found in new rooms, but basically you’re forced to solve the same puzzle a hundred different ways, a hundred different times to reach the conclusion.

When you start up the game, the cartoon’s original introduction – with its delightfully ‘80s theme music intact – introduces the three characters you’ll be spending the next several hours with. Throughout the adventure, you’re in control of three children: the Spanish Esteban, the Incan Zia, and the final descendant of the Mu dynasty, Tao. (You’ll also be accompanied by Kokapetl, Tao’s pet parrot.) The game takes place chronologically throughout the second season of the cartoon as the children search for the second of seven (mysterious) cities of gold.

A brief introductory scene offers a little exposition, but the game mostly assumes that you are already familiar with why these three children are searching for the lost cities, why they’re flying around in an airship shaped like a golden condor, and why they’re being chaperoned by the explorer Mendoza. It’s really a shame, because the story behind Secret Paths was one I wanted to know so much more about. Considering a large portion of its audience may never have seen the original cartoon, it’s confusing why the game provides so little backstory into the world, lore, and background of its narrative. If you want to know more about the history, you’ll have to look it up on Wikipedia, just like I did. 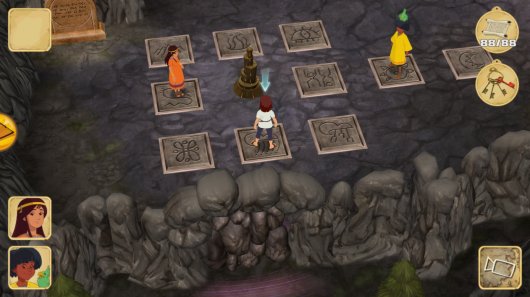 After the first cutscene, the trio find themselves in a Chinese jungle maze that provides a basic tutorial on how they can navigate the successive challenges. The game is played from an isometric third-person perspective, and you can choose to change which character you’re directly controlling at any point. Each click of the mouse will send the selected character to a new destination, or have them interact with an object, and every level in Mysterious Cities has the same objective: to advance from the starting point to the end of the current maze. Each character has one unique ability – Tao can decipher ancient Mu hieroglyphs (and his parrot can steal keys from NPCs), Zia can squeeze through tight spaces, and Esteban can use his sun medallion to activate magical columns. The different talents are reminiscent of Ron Gilbert’s cast of characters in The Cave, but not nearly as sophisticated in their execution.

Each labyrinth features a number of spatial riddles which must be solved using all three characters in tandem. The characters must stand on pressure plates, push levers, and put dragon statues on pedestals to navigate through each maze. In addition, depending on the current location, there will be a number of villains that the current character has to sneak past without being seen. The difficulty in solving all of these puzzles is fairly low – the game is family-friendly fare and the riddles are designed to be solved by children of nearly any age. Most of the puzzles can be solved by quick deduction (or trial and error), usually determining which character is required, the order in which the puzzle needs to be solved, or how to navigate a safe path around the villains. With 30 levels throughout the game, there’s certainly a number of disparate ways these challenges are set up, and the difficulty ramps up (ever so) slightly throughout the game, but each maze is simply a new configuration of the basic puzzle. Sadly, despite the imaginative backdrop of Esteban, Tao, and Zia’s exhilarating historical quest, you as a player won’t need to use any imagination at all to reach the end.

The game does offer replay value – if you really want to go through each maze again – by providing achievements for each level. Finding every secret chest, completing the maze in a certain amount of time, or recovering each bit of parchment scattered throughout can all boost your score (or unlock cartoon illustrations), and every maze can be re-visited at any time. It’s a way to provide a reason to return, but after completing Mysterious Cities in around 10 hours the first time, I was not enthusiastic about prolonging the experience. 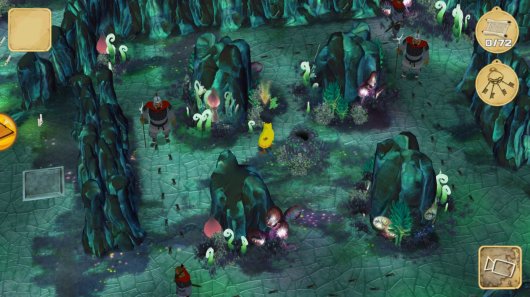 This is the game’s biggest conundrum. While it is certainly easy enough for a child to complete, I found myself wondering what child would have the attention span to slog through all 30 tedious levels (each taking between 8-40 minutes to solve). Committed puzzle fans aren’t going to find any challenge in Mysterious Cities, and even casual game fans surely demand more variety from their games than this. Really the only audience that might find the game worth bothering with will be hardcore fans of the original show, if just for the opportunity to walk a few miles in Esteban, Zia, and Tao’s weathered sandals.

At the very least, the designers seem to be hardcore fans of the show, presenting a world which is complementary to and complimentary of its original canon. The artwork is fantastic, and it truly feels that the digital versions of Esteban, Zia, and Tao are inhabiting the same world as the cartoon. Simple animations, such as Tao rifling through a book or the trio jumping into the air to celebrate the completion of a maze, are fantastic. At a few points during the game, a character may make a comment about the current puzzle, and their innocent and playful dialogue is a joy. The cinematics between gameplay are also very well-integrated. For instance, a cutscene might introduce a new location which is then perfectly recreated artistically for the puzzle world. There were a number of sequences – especially near the end – that really impressed me with how the gameplay world’s visuals fit seamlessly into the original cartoon.

The soundtrack also provides a wonderful accompaniment, providing small music cues when a puzzle is solved and a more bombastic and intense score as the children get closer to the city of gold. Unfortunately, the characters are not directly voiced outside of the cartoon cutscenes. 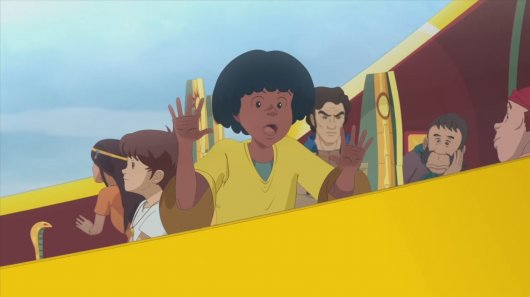 The narrative at the heart of Mysterious Cities is as light as the original show it’s paralleling, but it’s a fun romp through 1500s China that has a satisfying conclusion (with a bit of a cliffhanger ending). Unfortunately, because the gameplay is so basic, there is no opportunity to truly explore the beautiful and enchanting world presented here. And while I’m happy to grant a bit of artistic license for a game based on a children’s cartoon, there are also a lot of inexplicable elements in the mazes. Why does the Forbidden City (one of many interesting locations the trio visits) have the same pressure plates to open a door that a secret cave does? Why are there pirates inside of the secret temple that only the children are supposed to have access to? Even for a historical fantasy world, Mysterious Cities requires an abundant suspension of disbelief.

Ultimately, the many inspired artistic choices the designers made are why the overall experience is such a disappointment. I wanted to like this game so much. I couldn’t help but find myself enamored with its naiveté, innocence and precociousness – but solving the same puzzle ad nauseam had me grinding my teeth. What should have been a euphoric feeling upon discovering a hidden, magical city at the end of a grand adventure was instead a feeling of relief that I didn’t have to pull any more levers or activate one more sun portal. If you’re looking for a game to play alongside your child, and can resign yourself to the fact that one if not both of you are likely to lose interest before the final credits roll, there are a number of things to like in The Mysterious Cities of Gold: Secret Paths. For adventure gaming fans, though, the gameplay is simply too tedious and shallow, and the lack of any actual adventuring is a glaring omission. I loved the cartoon cutscenes between mazes so much that I wish I had simply rented the series on Netflix instead.

WHERE CAN I DOWNLOAD The Mysterious Cities of Gold: Secret Paths

The Mysterious Cities of Gold: Secret Paths is available at:

Mysterious Cities of Gold faithfully recreates the look of the television show, but its shallow, repetitive, and unimaginative gameplay should have you prospecting somewhere else.

GAME INFO The Mysterious Cities of Gold: Secret Paths is an adventure game by Ynnis Interactive released in 2013 for 3DS, iPad, iPhone/iPod Touch, PC and WiiU. It has a Comic cartoon style, presented in 2D or 2.5D and is played in a Mixed perspective.