We get a small commission from any books sold.
All Bitmap Books
Written by
Andrea Morstabilini — January 22, 2010

The last time we saw him, young Adam Greene was standing on a moonlit dock and saying goodbye to Delphineus, the little dolphin he helped on his quest for Cetus, the giant whale King of the Ocean. During their underwater journey, the two confronted many dangers and overcame many obstacles, none of them more insidious and perilous than the fruit of men’s recklessness: oil pollution. Thanks to their bravery, Adam and Delphineus not only found the missing Cetus but also helped the sea, and the world, become a better place by cleaning up the rubbish left over by irresponsible people and ruthless oilmen. Now, two years have passed and Adam is up for another adventurous voyage, this time to Iquitos, a small Peruvian village on the border of the Amazonian rainforest, where he will have to assist his father, an ecologist and biological researcher, in his studies of the forest ecosystem.

Two years also passed in real time between the release of EcoQuest: The Search for Cetus and Lost Secret of the Rainforest in 1993. This gap reveals itself in terms of production values, particularly the improved graphic detail, but this second installment stays true to its predecessor’s gameplay, being an educational adventure clearly aimed at children and young adults, with tons of information about the rainforest to be learned and puzzles (usually very easy) to overcome. Unfortunately, one other thing changed in this period, as Jane Jensen was off designing her own adventure and EcoQuest 2’s design burden fell solely on the shoulders of Gano Haine, who has provided top-notch documentation about the educational aspects of the game, but fell a little short in terms of character interaction and plot development.

Upon their arrival at Iquitos, Adam and his father quickly find out that something is wrong with their expedition’s supplies. Worsening the situation, a thief snatches one of their suitcases from right under their noses, and Dr. Greene must leave Adam alone to report the theft. Yearning to see the jungle and annoyed by the continuous setbacks, Adam decides to take a nap inside a wooden canoe moored at a nearby dock. While he sleeps, two quarrelling otters emerge from the water, chew the rope holding the canoe and steer it through the slimy river up to the very centre of the rainforest. Why? Because, weakened by the industrialists and poachers that are ravaging the land, the Forest Heart is dying and Adam has yet another prophecy to fulfill: with the help of the Grove People, an indigenous nomadic tribe, and Paquita, a very rare golden bat, he must travel to the City of True Gold and retrieve a precious seedling, the only possible heir. However, little does Adam know that, driven almost mad by gold lust, a greedy, unpleasant man by the name of Maxim Slaughter will be following his steps very closely. 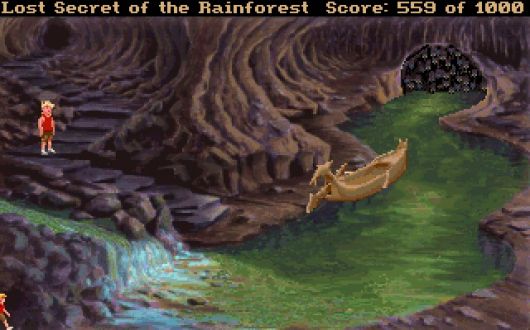 EcoQuest 2’s plot is more complex than the first game’s but it nonetheless feels more banal and predictable. Its predecessor was fairly original because the scenery it presented was almost apocalyptic: the enemy to confront was elusive and unbeatable like only oil can be, but in his own small way Adam tried hard to make a difference, no matter how and what. At the end of The Search of Cetus, the problem of maritime pollution wasn’t solved, but at least Eluria was safe and there was hope for a better tomorrow. In this sequel, Haine gave the story a proper, classical villain – and a flat, stereotypical one, I might add – and this choice diminishes the impact of the game, in terms of both educational purposes and the player’s involvement. Like the villain, the tasks Adam must undertake during this adventure are a little more trivial: from extinguishing a fire started by a cigarette butt to distributing leaf-shaped entry passes to a tribe of forgetful bats, players must wait until the final segment for more enthralling challenges like finding the Fountain of Youth or fooling a sleeping dragon.

The script itself has some strong points, particularly near the end, but the writing is often dull and uninspired, and the characters remain quite superficial throught the game, mainly due to their simplistic dialogues. Aside from Paquita, who is the only character to show any real signs of a personality, the supporting cast is utterly uninteresting: the various members of the Grove People tribe are so similar to each other and totally lacking in background history or vivid details that they feel almost interchangeable. Their lines often reflect this dullness with bland, paltry responses to Adam’s inquiries, and Mr. Slaughter and his henchmen are even more paper-thin and insignificant. Furthermore, when the writing tries to be funny, the humor usually falls flat, without any residual sparks of the first game’s vivacity. Even the educational facts, which in The Search for Cetus were often filtered through witty descriptions and conversations, are presented here only in a brief way that never manages to be really captivating.

What’s worse is that the educational aspect seems to stifle the pacing of the plot and hamper the entertainment offered by the title, mainly because of the Ecorder. Adam has this technological device from the very beginning of the game and must use it to gather valuable information about the rainforest, the environmental issues and the ancient cultures of the area. Since the Ecorder often bears necessary clues on how to overcome certain situations, upon entering each new screen the player must use it on almost everything and then read what it has to say about trees, flowers, exotic birds, tribal utensils and so on. The problem is that navigating through the Ecorder interface, presented in a sort of pop-up window, is clunky and unintuitive, especially in the early stages of the game, making the whole process tiresome. Since the Ecorder needs to be accessed so often, the gameplay can’t help but feel a little stretched from time to time. 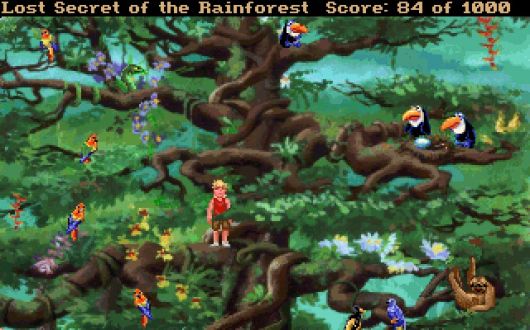 Where the game really shines is in its production values, which were amazing for the time and remarkably good even by today’s standards. The cartoon-like graphics are luscious and colorful, bright and full of stunning animations like multi-colored birds flying from branch to branch and serene rivers flowing gently; or where the forest has been destroyed by men, in smoke rising from the shacks and excavators drilling the soil in the background. The character portraits in the pop-up dialogues not only display several facial expressions, but also show a charismatic quality that nearly matches the old, hand-painted Disney movies. The music, orchestrated by Dan Kehler, manages to be varied and always captivating: every location has a unique, distinct tune which change in mood and tone according to the situation, and the main theme, returning from EcoQuest I, is always a pleasure to hear. The game also features some sparse but well-done voice work: while not covering the entirety of the dialogues, certain lines like the Forest Heart’s are spoken aloud. The voices are always clear and neat, as are the very realistic sound effects.

EcoQuest 2 uses the SCI1.1 engine and the standard Sierra point-and-click, icon-driven interface remains pretty much unchanged from other games of the period. Like in the first installment of the series, in addition to the usual Walk, Use and Talk options, players can access a Recycle icon, by which Adam can literally clean up the mess other men have left behind. A slight innovation is represented by the Bat icon, through which players can read tons of “surprising facts” about the rainforest. These two EcoQuest-specific icons serve no other purpose than to achieve a full score, and they are never integrated into the actual gameplay, but the Ecorder is often useful for puzzle solving. To use the Ecorder, the player simply selects the device from the inventory and moves the cursor – now shaped like a little monitor – around the screen; when the monitor lights up, it means that valuable information about that object (or environment, or machinery, or environmental threat) can be obtained.

Speaking of puzzles, EcoQuest 2 presents the player with a plethora of challenges: from inventory puzzles to logic-based ones, with a number of fetch quests thrown in between, the obstacles to overcome show a good variety and ensure that the game remains entertaining and never frustrating – with one inexplicable exception. In the middle of the adventure, Adam will be captured by Mr. Slaughter and, with the help of Paquita, he must escape from prison while avoiding a patrolling guard. This section functions like an over-arching complex puzzle made up of many smaller quests, but the problem is not only that the puzzle is insanely difficult (and quite illogical in the process) and solvable only by several trials and plenty of error, but also that it requires a previous pixel hunt to obtain a vital object, hidden very well (and I mean really, really well since it’s completely invisible) in a messy location full of useless stuff. I highly doubt that a child could overcome this puzzle without the use of a walkthrough, whilst the other challenges are otherwise thoughtful and intelligent. I had a particularly great time solving the puzzles in the City of Gold, which require careful exploration and creative thinking to beat the challenges presented. 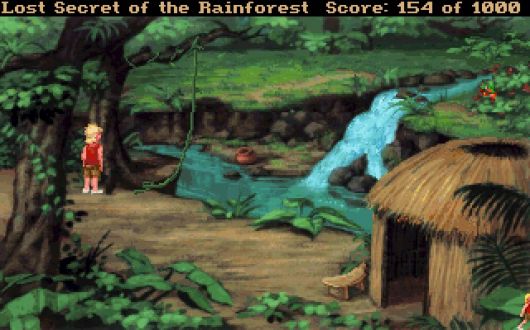 Even considering the insanely difficult “escape from prison” puzzle, it’s unlikely that an experienced adventurer will spend more than ten hours trying to help Adam in his second quest. Whilst the length is comparable to today’s standards, the game can be pretty difficult just to find and may therefore be quite pricey when you do. It should also be noted that there are two versions of the game, one for DOS which runs flawlessly with the help of DOSBox (upon which this review is based), and one designed for Windows 3.1, which presents many audio-related problems on modern machines, along with some speed issues.

All in all, though less enjoyable than its predecessor due to its uninspired writing and pacing issues, EcoQuest 2: Lost Secret of the Rainforest is nevertheless a solid "Discovery Series" title that’s highly suitable for children. And if the blend of education and entertainment isn’t as well-balanced this time, making the game less pleasant for adults, a skilled adventurer can still enjoy it for what it has to offer: a relaxing, luxuriant journey to the heart of Amazonia that is once again a pleasant vacation from more challenging, demanding adventure games, and a thought-provoking quest about the perils of mindless progress.

Less enjoyable than its predecessor, EcoQuest 2 is still a good edutainment title for children and a fair choice for adventurers in search of a less demanding adventure.

GAME INFO EcoQuest 2: Lost Secret of the Rainforest is an adventure game by Sierra On-Line released in 1993 for PC. It has a Stylized art style and is played in a Third-Person perspective.

What our readers think of EcoQuest 2: Lost Secret of the Rainforest