Darkness Within: In Pursuit of Loath Nolder review

Our Verdict: A promising first effort for such a small development team, but the game is marred by an impersonal, emotionally distancing plot and bad design choices.
Reader Opinions
Log in or Register to post ratings.
Average Reader rating

Readers rate this game as Good.

Average based on 8 ratings

Darkness Within: In Pursuit of Loath Nolder  (2007) 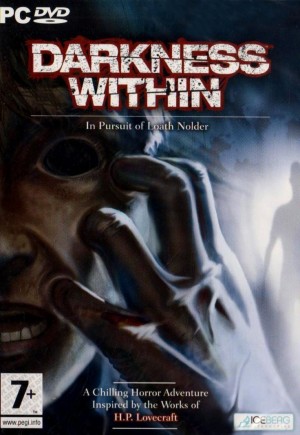 See all games in the Darkness Within series

» Adventure Games DB
Advertisement
It will take you 6 minutes to read this review.

Adventuring fans of classic horror writer H.P. Lovecraft have been surprisingly well catered to over the years, most recently with Sherlock Holmes: The Awakened and adventure/FPS hybrid Call of Cthulhu satiating the need for sinister elder gods and dark secrets. Those games are now joined by the first offering from Turkish developer Zoetrope Interactive, the elaborately titled Darkness Within: In Pursuit of Loath Nolder. Unfortunately, while showing some signs of promise, it’s not a game that benefits from comparison to its Lovecraftian peers. Darkness Within doesn’t attempt to push the envelope as those games did, and yet despite its modest ambitions, it fails to achieve many of its more traditional goals.

Proceedings start better than they end, at least. The story is instantly intriguing; told in true Lovecraft fashion as a retrospective personal account by the now-resident of a lunatic asylum. This is followed by a genuinely disturbing dream sequence, others of which re-appear throughout the game. In reliving his story, you play Howard Loreid, a police detective in Wellsmoth, a creepy town in an undisclosed, generic location. Howard is charged with tracking down the eponymous Loath Nolder, a renowned P.I. now wanted for murder and connected to a dark cult based in the town. It isn’t really possible to determine where the action is meant to be set. The voice actors all speak in English accents, and sound rather bored much of the time, but the use of American date systems and architecture contradicts this. Not that it matters, because you’ll spend most of your time following your suspect into very dark interiors. As “loath” as I am to take cheap cracks at a game’s name, there’s a lot of darkness within this game. You’ll be exploring foreboding, sinister mansions, sinister cabins, sinister catacombs, and sinister caves. If there’s one thing this title likes to do, it's force you to spend long stretches in the same haunted-house rooms.

It’s some blessing that the graphics are very tastefully done. The architecture of the interiors, from peeling paint to weathered objects to sumptuously carved desks, give each of the admittedly few locations a look and identity of its own. The node-based movement system, which allows players the freedom to move the camera but not their position except by clicking on pre-determined nodes, will not suit everyone. Although I found it somewhat frustrating and restrictive compared to free-roaming 3D, many will find the system ergonomic, familiar, and appreciate the ability to control everything by mouse. While conservative at its core, the engine does highlight some very nice lighting and particle effects, such as moths hovering around a light or flames rising from torches, and catching a little movement in the corner of your eye helps ratchet up the suspense. 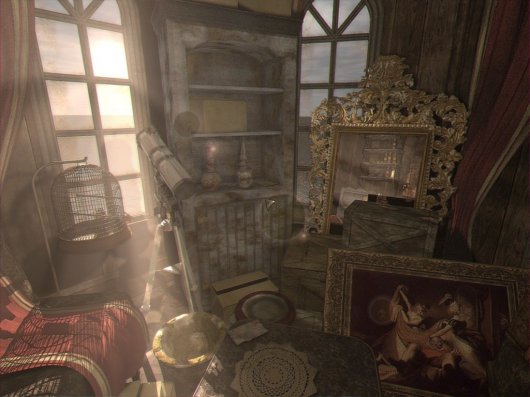 Aside from a few of these little touches, though, the game is not particularly scary. Our protagonist may be narrating his descent into madness, but in reality, he just comes across as somewhat cowardly. For example, during one early location, he descends into a well and finds a cave-in. After we hear a few vaguely animalistic sound effects, our poor detective starts hyperventilating and the player is forced to run away, never to be allowed to return even to the room in which the well was discovered. The game’s most obvious scare tactic is to shake the camera about a bit and play heartbeat sounds, which happens most of the times the player sees or hears something a little sinister. At first this is effective at escalating a sense of tension, but as soon as the novelty wears off, it becomes obvious that whilst they can tease about unseen horrors, the developers don’t have the requisite resources or the powers of Lovecraftian suggestion to back it up. You simply never encounter anything scary, unless you count a man in a robe waving his arms about, his face in shadow, in what is intended to be the most visually threatening image in the game.

Even as an example of psychological horror, with terror intentionally implied rather than witnessed, the game proves lacklustre. This is in part because the characters never feel real enough or the world complete enough to create empathy. To take an example, while exploring the house of the murdered man, it becomes apparent that he has been killed by a dangerous cult, but there is nothing to discover in the house directly related to the murder: no body, no drips of blood from the ceiling, no signs of struggle. There are story reasons for all of this, but in this and many other areas the developers passed up a chance to give their slow-boiling suggestion a big pay-off. The main problem is that the plot throws around a lot of names with no faces to attach to them – and the journals and correspondence aren’t intense or well written enough to make more conversations redundant. The lack of face-to-face dialogue will no doubt be fine for players used to deserted world games, but in a murder investigation-turned-horror title this comes across as a cop-out. Intentionally, some details are left vague, as is the nature of the genre, but too often the plot confuses, leaving the main character's motivations unclear and an abundance of hard-to-distinguish, unmemorable bit characters, most of whom you never meet.

I gather that this game is the first in a planned series, but the ending is neither cliffhanger nor satisfying resolution; the dead-pan narration during the protagonist’s escape into madness is unintentionally funny. This sequence highlights the other way Darkness Within attempts horror: the rather Victorian technique of the character telling the audience just how scared they should be. Just as we never get to see the creature in the well, we never learn any more about it, never see what terrible things it has done, or even hear it again beyond those few muffled groans. 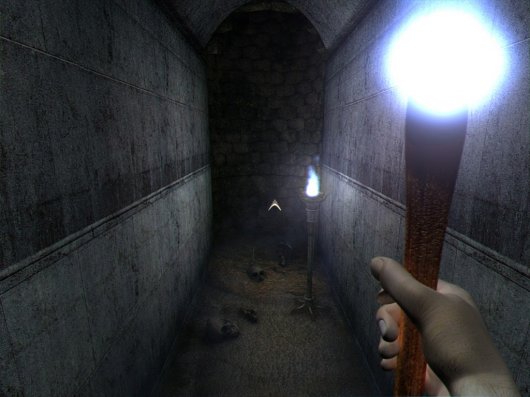 In gameplay terms, Darkness Within does maintain a decent variety of activities. Exploration, examining areas for clues, inventory puzzles, cryptic codes and locked areas all make an appearance. Some of the ideas are quite interesting; I enjoyed especially a puzzle which requires you to understand a simple lock by showing you an unlocked version. Many of the puzzles, though, are needlessly difficult, and a few don’t make a whole lot of sense. One, for instance, requires you to work out a date by scouring a journal for half a dozen clues then mixing them together using the kind of absurdist mental gymnastics that will leave many simply guessing the solution. Add to this sort of problem a bug which can irretrievably remove clues from your inventory and another that may give you an inventory item before picking it up in the game, and the experience might start to feel like a chore to even a dedicated sleuth.

The main distinguishing feature is using concepts (thoughts, clues) like inventory items, allowing you to combine them, but there is no feedback when you make perfectly rational links that aren’t part of a specific puzzle, and you’ll occasionally find situations where you, yourself, know what to do, but can’t make Loreid “think” the correct solution. As attractive as an abstract-conceptualisation system seems in theory, I’ve never seen it implemented in anything other than a frustrating manner and this game doesn’t buck the trend. Rather more success is achieved by the game’s other little innovation – you can underline passages in documents to get important clues. This is more fun than it sounds, and can be solved by trial and error relatively easily if stuck. This feature makes frequent appearances, and whilst it is compulsory, the difficulty can be adjusted to make it easier.

There is also a weak attempt at an automatic hint system which sometimes adds hints to your inventory in the same way as clues, but you’ll find it tends to bother you too early with obvious statements, then leaves you high and dry when you’re really stuck. Of the different difficulty levels, only a masochist would pick the hardest setting, which entirely removes the hint system, and even allows you to scour the irrelevant documents for clues. The game is relatively long, and the frequent re-use of the same half-dozen locations again and again will wear out its welcome before the end. At least the less clue-heavy dream-sequences are generally more entertaining and creative than the rest of the game. 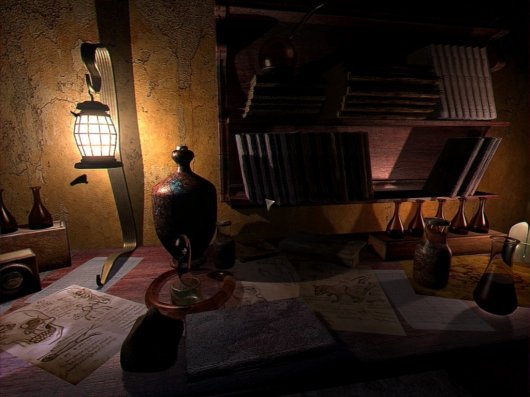 The sound design, fortunately, is one aspect which can be praised with little qualification. The ambient soundscapes and chilling noises are nicely assembled, and the music holds its own, with the exception of one track in which singers literally make “woooooohhh” noises; roughly as scary as you might expect.

I came to this game determined to enjoy it. I played it with the lights off, and I was ready to be scared. And yet I wasn't. I also set a decade of adventuring experience to work on the puzzles and still needed to use a walkthrough on occasion. Eventually, I started telling myself that I wasn’t the game’s target audience. But then I realised that this was nonsense; I like Lovecraft, I like adventure games, and I have a higher than average tolerance for obscure puzzles. Unfortunately, the game's confusing plot, lack of human contact, static scenes and frustrating gameplay had simply worn thin. Zoetrope are evidently talented individuals with a genuine love of Lovecraft, but although they can create genuinely haunting environments and the beginnings of a chilling tale, they aren’t ready to follow in his sinister footsteps just yet. 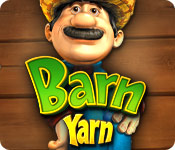 What our readers think of Darkness Within: In Pursuit of Loath Nolder

It nearly sinks under the weight of its convoluted ending, but until then this future-noir visual novel murder mystery is an effective page-turner.