Review for Adventures of Fatman 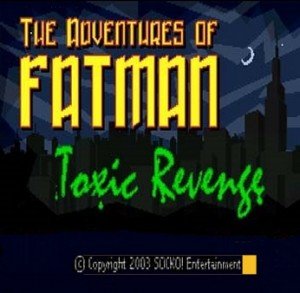 The Adventures of Fatman

We get a small commission from any books sold.
All Bitmap Books
Written by
Rob Michaud — October 14, 2003

Probably one of the hardest things to attempt, and do well, in any genre is the parody. There is a fine line between good parody and your buddy who thinks he’s going to be the next Weird Al. Don’t believe me? Then think about this. For every Young Frankenstein or Austin Powers, there has also been a Dracula: Dead and Loving It and Silence of the Hams. And now there is Socko Entertainment’s The Adventures of Fatman. Guess which category it fits into?

I wanted to like this game--I really did. Reviews on Socko’s site and in online searches of reviews for the game generally turned up positive, and I was dying to get my hands on a copy of it since I first heard about it. But I have to admit that I was concerned from the start about someone pulling off a successful Batman parody.

You are Fatman, protector of the city of Shadowlawn, when you’re not stuffing your face with cheese puffs. A case of industrial espionage goes awry, and the city is soon left facing the criminal mastermind Toxicman. It’s up to you as Fatman to put a stop to him before he mutates the entire city--followed by the world!

The storyline isn’t bad (although fairly clichéd) but the “throw everything at the wall and see what sticks” attempts at humor fall flat most of the time. I can be as low-brow as the next guy, but do we really need to see another Hindu store clerk, or another “solve the puzzle by farting” joke? Leisure Suit Larry did it and did it well, but it’s been overdone by now.

Backgrounds are well done, but character graphics and animations are very hit or miss. Fatman is very well done, and reminiscent of the old LucasArts characters, but the rest of the actor graphics are more along the lines of the Reality-on-the-Norm series.

One of the things that I absolutely loved was the full MIDI soundtrack by Mark Lovegrove. The music was very evocative of the old Sierra style soundtracks, and implemented the Batman theme into them in very unusual and interesting ways. 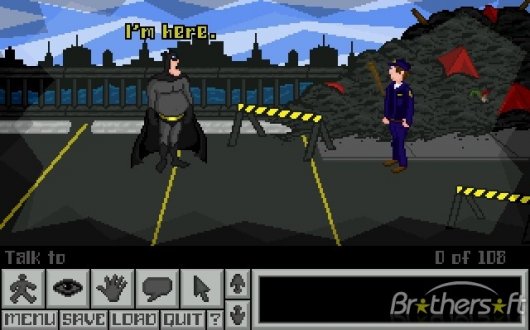 Voiceover work, on the other hand, was an absolute mess with the exception of the FatComputer, which made me laugh every time I heard it. I fully appreciate the love that a designer has to have for his game to go through the expense of finding a full voice cast, but none of the voices fit the characters at all. An hour into the game I turned off the voice support, and I think that most gamers will do the same while playing. Full voice support was a great idea, but bad execution really killed this one for me.

Gameplay is of the typical Sierra point & click variety, mainly due to the AGS engine used for the game. Holding your mouse over an item will give you the name of the item, and this will come in handy, as there is some pixel-hunting present in the game. There is a scoring system in place to show your status during the game, which is a nice touch, but a bug in the game allows you to rack up the full points without ever finishing the game.

Puzzles are a decent mixture of fetching, inventory combination, and even one timed action scene near the end, which can be slowed down if need be. They were, for the most part, well-integrated, although some of the puzzles required some leaps of imagination to figure out the solutions, and as stated earlier, pixel hunting does mar some of the solutions throughout the game. 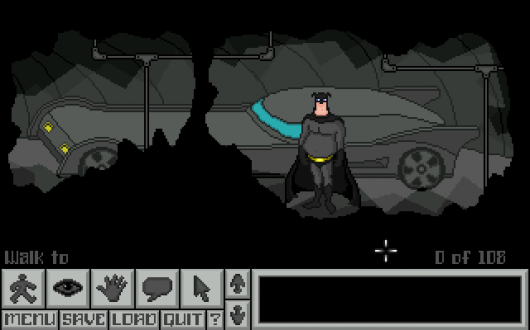 Had Socko put this out as a free game with the voices stripped off, they would have been the darlings of the amateur adventure game scene for years to come. But by putting this out for profit--even at fifteen bucks--they have moved themselves into the professional leagues. And as much as I wanted to love this game, it was not quite ready for the big leagues. But rest assured--I do think that we will see great things from these guys down the line.

(After several years of non-availability, The Adventures of Fatman can once again be purchased, now as a download from the Wadjet Eye Games store).

A mild-mannered freeware game trying to be a super-commercial release. Save your money for the sure-to-be-soon release of Pooperman.

GAME INFO The Adventures of Fatman is an adventure game by SOCKO! Entertainment released in 2003 for PC. It has a Comic cartoon style, presented in 2D or 2.5D and is played in a Third-Person perspective.

What our readers think of Adventures of Fatman