Is it possible that, just maybe, we are putting former LucasArts game designers on too high a pedestal? As a long-time fan of classic LucasArts games, my immediate response would be 'no, what are you smoking?', but I'd be lying if I claimed the thought had never crossed my mind. Sometimes you just step back and wonder if the big names behind adventure games past were really that much better at their craft, or if their games are merely looked at through rose-tinted glasses.

My classic adventure gaming gland got tickled thoroughly the moment it was announced that Hal Barwood and Noah Falstein (Indiana Jones and the Fate of Atlantis) would be designing a game called Mata Hari for publisher dtp/ANACONDA, despite not much else being known about the project at that point. Having now formed some hands-on impressions at the Games Convention, I can only commend dtp for bringing Barwood and Falstein on board. Their unique creative direction is palpable even from the very early demo I was shown, instantly reminding me why they have the reputation they have.

Serving as the game's main source of fiction is the historical figure of Mata Hari, an exotic dancer turned spy. The game takes some creative license, establishing that Mata Hari was actually a spy for many years before her dramatic execution. Playing as Mata Hari, you are required to use both charm and ingenuity to become a succesful spy. 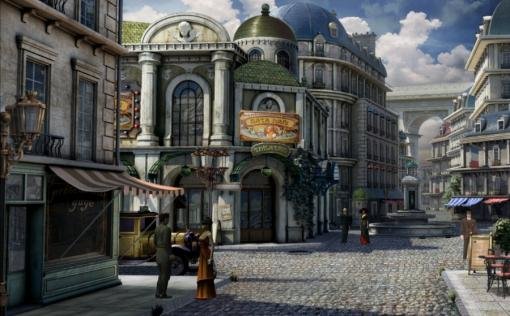 Set in the pre-WWI Belle Époque golden age, the game naturally exudes a lot of atmosphere. Its interior and clothing designs are easy to appreciate, especially if you have enjoyed games like The Last Express. The demo starts in a ballroom in Paris, with the Eiffel Tower visible in the distance from the balcony. At least a dozen characters are involved in the scene, instantly setting the game apart from more solitary adventures (such as those set in haunted houses or isolated islands). Mata Hari's first goal in the demo is to convince a dance manager that she is not merely a prostitute from the streets but a high-class dancer, and the way to do that is to get one of the characters to give Mata Hari an introduction. However, first she will have to establish some social standing amongst the different characters in the ballroom.

The interface of Mata Hari reveals itself to be well-equipped for this type of dialog puzzle. As Barwood explained while demoing the game, he and his co-designer didn't like the way adventure games have one mode for conversation (typically with multiple choice dialog) and another mode for object manipulation. To engage the player more in the dialogs and to streamline the interface as a whole, it was decided to treat conversations the same way as object manipulation. 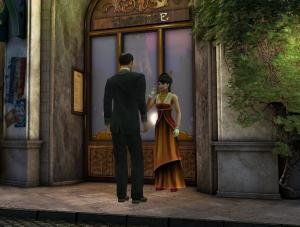 In other words, when a topic comes up in conversation, it is added to the inventory at the bottom of the screen, and it can then be dragged and dropped onto any character. The characters will converse, with new topics added to the inventory when they come up, leaving it up to the player whether to use this topic icon or to do something else entirely. In the demo scene, Mata Hari quickly gathers up various small talk topics from different characters. She can then proceed to gather compliments from influential people in the room, ultimately leading one of them to vouch for her to the dance manager.

The interface may sound somewhat similar to the Broken Sword games, which also use icons to represent conversation topics. However, Mata Hari never enters a branching dialog structure, instead turning the player back over to the inventory interface after each couple of conversational beats.

The interface is also unique in other ways. Because inventory items are so general in nature in Mata Hari, Barwood prefers to call them tokens. Solid objects and conversation topics can be tokens, but so can abstract thoughts. When a character asks about a drink, "drink" will become a token, which can be used at the bar, at which point the token changes color to indicate that it is now a solid object. Other tokens serve as reminders of Mata Hari's tasks, while travel tokens can be used on cab drivers or at ticket counters to quickly get to other locations.

Just when you thought the standard point-and-click interface "ain't broke", a game comes along that shows it might just be a little bit broken after all, while elegantly fixing it. Mata Hari's interface is remarkably balanced between simplicity and representational richness, making me very curious to see how it will be carried through in the full game.

In addition to the type of conversational puzzles explained earlier, Mata Hari will also have many espionage inspired puzzles. In one scene, Mata Hari has to infiltrate the British embassy in Paris to photograph some secret papers. In another, she has to get an impression of someone's corporate seal. Gradually she will learn to use the technology of spying in early 20th century, like primitive cameras and decoding machines. 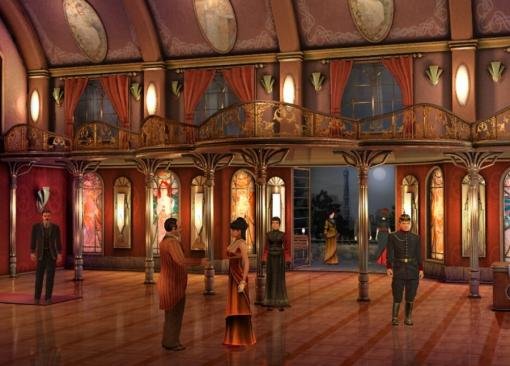 Mata Hari will also have some more unusual puzzle mechanics. For instance, as you move from city to city, other agents will pursue you. If you get caught, you are transported back to your previous city. However, if you stay one step ahead of the agents, you will gather what are essentially power-ups, allowing you to designate certain cities as safe-havens, or outrun other agents with express tickets. While this part of the game was not shown -- so we can only imagine what it will look like -- Barwood's description sounded much like a simple board game in disguise. He called it "a puzzle that's different every time you look at it", which is a fair way of putting it given the mini-game will be entirely turn-based.

The rhythm dancing mini-game might be the only controversial element in Mata Hari. Admittedly, it would be very odd if there wasn't at least some form of dancing in a game about a dancer, but fortunately only a few dancing sequences will be required to solve essential puzzles. The designers consider Mata Hari a 'pure' adventure game, and any required action sequences will be very easy to complete. Other dancing sequences are required only if the player wants to have a perfect score at the end of the game (yes, the game keeps track of score like a Sierra adventure -- in fact, it keeps track of three different measurements of success).

It should be noted that what I was shown of Mata Hari still has a long way to go, with many placeholder assets in the demo. It's still unclear how everything will fit together in its later stages of development, though the early build shown already exhibited enough sparks of creativity and design vision to instill much confidence. A refreshing atmosphere, combined with sensible interface evolutions and experienced designers at the helm make Mata Hari a game to look out for.

Stay tuned for our interview with Hal Barwood containing more details of Mata Hari's features, the story of how the project was born, and more.