We get a small commission from any books sold.
All Bitmap Books
Written by
Austin Boosinger — August 3, 2007

Dead Reefs is not a pirate game. Do not be fooled. You won't see any muskets here. And you can go ahead and forget the rum-guzzling seadogs, the acerbic amputees, or the thrill of a cutlass fight across a tilting schooner. Sure, these sorts of things may be spoken of in the game, but you certainly aren't going to see any of the action. The pirate motif exists, but only as means of a backstory.

The island you explore (appropriately named Dead Reefs) has a history of pirates luring in ships for plenty of plundering and slaughtering. The most notable such an event occurred many years earlier, when a group of monks attempted to take refuge on the island. After their merciless pillaging, the pirates found a strange old relic, one that causes a seemingly random murder every nine years. The pirates quit their pirating in fear of this curse, yet the murders still continued for decades. To find the cause of these mysterious deaths, and perhaps prevent the latest, the King sends for an investigator, and that's where you come in.

You play as detective Amadey Finvinerro, a stoic Johnny Depp lookalike with a walking stick. Taking place in the 18th century off the English coast, the game plays more like a polite gothic tale than a swashbuckling pirate adventure. There is an emphasis on story, which plays out like a whodunit-style murder mystery in a frightened, curse-fearing town, and puzzles mostly take a backseat. It's unfortunate, then, that the story lacks depth--there isn't much to the characters, the town, or the mystery. You'll spend most of your time on the island asking the town locals what they think of the peculiar items and characters you come across. 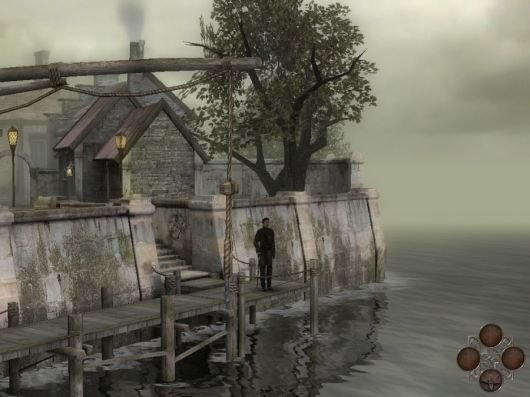 That's not to say that the journey through this adventure is all that bad: it's a fun ride, at times, with a few twists and unexpected events that'll keep you somewhat interested. Problem is, that's all the game feels like: a ride. As you begin to "explore" the island, the game hits you with its stark linearity. Very rarely do you feel like you are making any choices as to where you want to go, and you'll find that the island often denies your interaction with it. Immediately visible doors are completely unavailable to you, the omnipresent scrawled arcane symbols defy closer examination, and stairways leading to tantalizingly lit upstairs cabins are apparently inaccessible by foot. Aside from that, the few places you are allowed to explore are circumstantially available. Lead your character off the game's chosen path, and you'll immediately be turned around, informed that you need to stay in the current area.

Despite such a seemingly set path, getting where you want to go still isn't easy in this third-person, free-roaming world. The keyboard-only controls are awkward and inefficient at the best of times, and can turn a seemingly simple task like combining inventory items into a long, arduous process. The controls can be remapped, but the mouse isn't an option, and different key combinations don't seem to help much. Confusing camera angles don't help either, and even small movements may lead you to a place you don't want to be. Add to that the fact that a few areas appear to be more than wide enough to walk through, yet still manage to block your character from entering, and Dead Reefs quickly starts to become frustrating, even as a ride.

Where the game takes a turn for the better, fortunately, is its graphics and music. They're not breathtaking by any means, but they're what make the game's shortcomings a little more tolerable. They sink you into the macabre setting, and easily immerse you into the desolate feel of the town. Lush outdoor environments are sharp and nicely detailed, from lonely docks to cemeteries to abandoned ships shrouded in fog. Leaves gently fall from trees, and birds perched on steps take flight as you arrive. The interior environs mostly consist of a large, dark manor that's full of the usual haunts and secret passageways. The music can be both simple and complex in turns, ranging from single, tense piano notes to fully orchestrated scores, and the sound effects make sure to provide a good scare now and then with an unexpected noise before the player gets too comfortable. It's haunting and creepy at times, and absent at others, leaving the listener to hear only the crashing of the waves. Together, the audio and visuals may convince you that the world of Dead Reefs is an interesting place to visit, though you probably won't care to stay all that long. 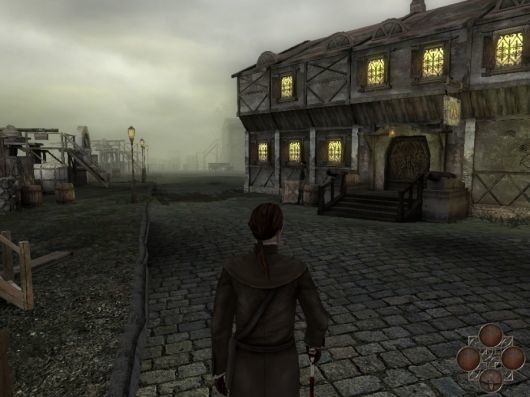 While Dead Reefs isn't necessarily pirate-like, the game does manage to occupy itself with some haphazardly patched-together clichés, including a crotchety witch brewing up potions to a frail ghost who is desperately wanting to tell you something about the past. These elements can be entertaining, but in the end they come off as pulp that takes itself a little too seriously, mainly because the game is devoid of charm and style.

Most of this problem stems from the game's dialogue. Attempting to let the mood soak in, I tried to imagine that maybe the handful of characters I met weren't the cardboard cutouts they first appeared. After all, they're scared of a curse, they're isolated, they're all taking a potion to ward off nightmares. So maybe they wouldn't exactly be teeming with life at that point. But this rationalization carried only so far, and it wasn't nearly far enough, as the conversations continue to be as dull as they are brief. Some of the poor dialogue could be attributed to translation problems, as the game's developer, Streko-Graphics, is a Russian-speaking team. But still, the characters are bland in their own right. The dialogue is formal, but that's no excuse for being overly stiff. The voice acting is believable, and the accents are reasonable, but it still tends to sound like people reading lines. The various characters play their part, making a brief statement that establishes their role (be it a cook, a painter, or a butler), and after that it's just filler. They rarely say anything that makes them them.

While the game is mostly spent conversing with these island inhabitants, there are a fair number of puzzles thrown in. They start out ridiculously easy (matching the notes of a simple piano tune, for instance), then hit a sharp curve to become more difficult, but mainly because the game often provides inadequate clues to solutions. Inventory items can be hard to find, particularly with the awkward controls, and you may find yourself tediously checking every inch of space in hope of finding something. I also had one instance where I couldn't pick up an item due to my character reasoning, "I may need this later." Why not grab it then? You'd think the detective would just take the thing if it were going to be useful. 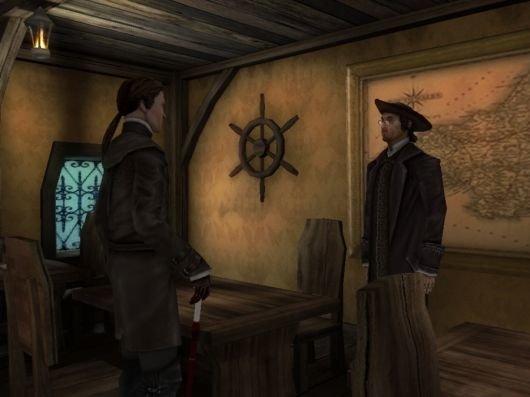 The puzzles can be fun, but they also feel a little too ordinary. Most involve familiar inventory applications, while some involve number combinations. Still others, such as a matchstick puzzle, are culled from standard puzzle books. This isn't a bad thing, but it would have been nice to see a slight diversion on the theme, so that players at least have the illusion that they haven't already completed the same puzzle many times before. A bigger problem is that it's hard to accept the puzzles in the context of the game. Whether you're mixing potions or setting time on a clock, it feels as if the puzzles were an afterthought, contrived to give the player more to do instead of fitting naturally into the story.

Whether you're working on a puzzle or just wandering around town, it's a good idea to save, and save often. The game has a few moments where death is possible, and some dexterity is needed, which again makes the camera angles a nuisance. In that sense, it may not be for those looking for a relaxing experience.

Overall, Dead Reefs offers plenty of atmosphere that teases with its potential, but really suffers from its make-shift story and weak gameplay, made worse still with poor controls. Sure, the sound and graphics are nice, but I'd like to think of such things as bonuses: devices used to enhance an already solid game. But here, sadly, they're the highlights of the game. And while the mystery behind Mr. Finvinerro's adventure can be interesting at times, as you gain clues and try to pinpoint the cause of all the murders, the game fails to ever really feel alive, with bland puzzles and lifeless characters populating the island. It'll keep you playing for eight or so hours, but by the time you're done, you'll likely get the feeling that the pirates were the ones having all the fun.

This gothic tale fails to rise above the level of uninspired pulp. The atmosphere proves immersive at times, but the gameplay, story, and overall experience prove as lifeless as the game's namesake island.

GAME INFO Dead Reefs is an adventure game by Streko-Graphics Inc. released in 20072007 for PC. It has a Illustrated realism style, presented in Realtime 3D and is played in a Third-Person perspective.