We get a small commission from any books sold.
All Bitmap Books
Written by
Gunnar Harboe — December 12, 2006

(Note: This review contains spoilers for 5 Days a Stranger.)

Trilby's Notes is the third game in Yahtzee's series of horror adventures, a sequel to the classic 5 Days a Stranger and a prequel to the follow-up 7 Days a Skeptic. In the first game, cat burglar Trilby found himself trapped in a house with a machete-wielding killer in a welder's mask. In the second, set hundreds of years in the future, the Welder returned to stalk the crew of a space ship.

In this game, players again take control of Trilby, now recruited by a secret government agency to investigate occult phenomena. A gruesome death leads Trilby to believe that the evil he thought he had destroyed when the DeFoe mansion burnt down is still out there, and his investigations bring him to a charming little hotel in Wales. 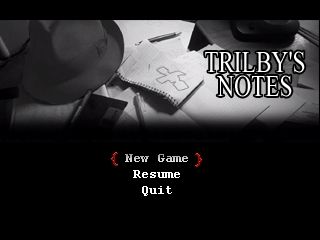 Before you can say "REDRUM", Trilby starts seeing the hotel change. The simple but comfy beds are replaced by torture racks and strange altars, body parts are strewn across the corridors and lobby, and the walls are covered with messages scrawled in blood. And not nice messages, either. No references to puppies, rainbows or chocolate cookies here. These writings are more along the lines of "PAIN", "IT FEEDS", and the worryingly unpronounceable "CHZO". Trilby is slipping into another, altogether unpleasant, reality. And he is not alone there. 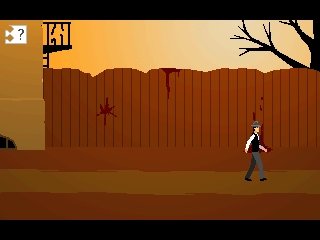 Yes, Trilby's Notes is haunted—not by the ghost of John DeFoe, who makes only a few brief cameos, but by the spirit of Silent Hill and Eternal Darkness. From Silent Hill it picks up the idea of a "bad place", an alternate world that is the dark side to our own. From Eternal Darkness it takes the frightening hallucinations and the notion of an epic story spanning thousands of years and told through flashbacks. In many ways, this is a tribute to survival horror games. 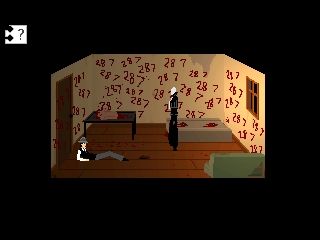 Although Trilby's Notes finds its inspiration in a different genre, it is itself an adventure game through and through. In fact, it is so old-school that it uses a text parser interface. There's no smart eye-hand-mouth-foot cursor, no handy grid of verbs to choose from. If you want to do something, you have to type a command and hope the game recognizes it.

As always, the parser system has both benefits and drawbacks. It is well integrated into the story of the game, which (as the title implies) is framed as Trilby's field notes from his investigations. And it enables at least one clever lateral thinking puzzle that would be difficult to express in a point-and-click game. Mostly, however, you find yourself entering commands such as "open door" or "take matchbox", which could have been performed just as well with a mouse click. Attempts at more creative actions are rarely recognized, and overall the game fails to take advantage of the freedom that text input offers.

At the same time, the fact that commands are usually so straightforward means that one of the major problems of parser games--the need to type in incredibly obscure and specific commands to solve certain puzzles--is not really an issue here. However, non-native speakers in particular may have one or two problems with the vocabulary. For example, you need to know that one of those shield-shaped signs that hang outside medieval inns is called a "shingle". Other than that, many players will be grateful that Trilby's Notes plays mostly like an inventory-based point-and-clicker that just happens to use a parser for input. 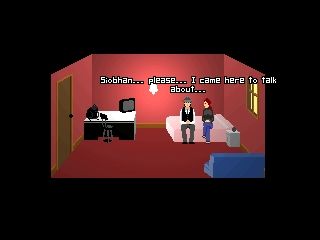 The big exception to that statement is in conversations, where the need to remember people and clues by name is likely to trip up unsuspecting players. Trying to type "ask Abed Chahal about Clanbronwyn Hotel" when you're not sure how to spell the name of the man or the hotel is a frustrating experience, and so is restoring from an earlier saved game to re-watch a cutscene because you didn't memorize a clue the first time around. I strongly recommend taking notes while playing.

Following clues to uncover ever deeper layers of the story is a big part of the gameplay. Trilby's Notes is completely linear, relying on events to trigger each new step of the game. Some of these are as blatant as items miraculously appearing just when you need them for the next puzzle, and this is probably the least satisfying part of the game. In one particularly egregious case, Trilby has to walk around the entire playable area to pick up five objects that must just have been left there by the inventory fairy, and then combine them in a particular location. For some reason, this causes a door to unlock. According to Yahtzee, this puzzle is deliberately ridiculous, as a joke on similar puzzles in survival horror games, but that doesn't make it any more interesting here. 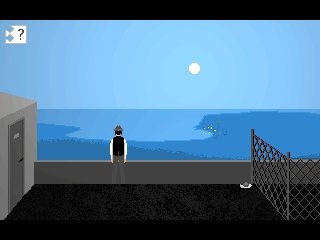 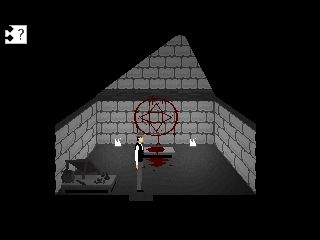 The rest of the gameplay is mostly quite conventional. It is considerably enlivened, however, by the ability to move between the same hotel in two worlds, which makes for some fresh and fun puzzles. This aspect of the game might perhaps best be compared to visiting the same mansion in three time periods in Day of the Tentacle. The frequent flashbacks are playable, and allow you to take control of characters other than Trilby, which really spices up the game. None of the puzzles are very difficult, but they do a good job of keeping the player involved in the story until the end credits.

Fortunately, the story told in Trilby's Notes is well worth the attention. Those players who were left with unanswered questions at the end of 5 Days a Stranger will be particularly satisfied, as this sequel wraps up many loose ends while tying the story of that game into a deeper mythology. At the same time, the strongest parts of the story are those that rely on the earlier games for resonance. As it moves further from the gothic drama of the DeFoes, the backstory turns out to be somewhat generic. Any feeling of disappointment, however, is wiped away by an excellent ending which wraps up the three games so far while setting the stage for a fourth and final one in an impeccably ominous fashion.

The inherent strength of the plot is supported by a skillful use of storytelling devices. The most prominent of these devices is the flashbacks, which set the structure and rhythm of the game. The hallucinations Trilby occasionally suffers provide foreshadowing and references to the previous games, and are the scariest parts of the game. Trilby also comes across a number of documents throughout the case, mostly fragments of a satanic gospel. These are written in mock-archaic English, and although a couple of errors may cause people who wince at the incorrect use of "wrought" to grit their teeth, they set the mood quite effectively. The game is otherwise nearly free of spelling and grammatical errors, and conversations and descriptions are well written.

This is a horror game, and as such, the atmosphere is very important. As it turns out, Trilby's Notes is mildly scary, but not more than most players will be able to easily handle. The dark side of the hotel is creepy at first, but loses most of its impact as it becomes more familiar. There are only a few places in the game where Trilby is in any real danger of dying, and the player is always given fair warning. After I had played for a while, therefore, I was walking around more or less unconcerned by the decay and slaughter that surrounded me. Fear is often about the unknown and lack of control, and as I understood more and more of what was going on and gained the ability to move between the two worlds at will, the game became less and less frightening. On the other hand, the hallucinations, which are unpredictable, provide effective scares until the end. 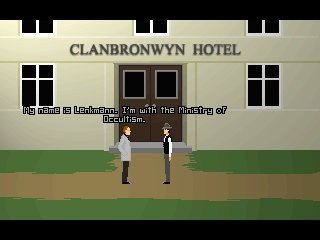 The sound effects and music add a great deal to the sense of unease. Mark 'm0ds' Lovegrove contributes a spooky MIDI soundtrack--the main title track is especially distinctive--and Yahtzee does the ghostly whispering we know and love from 5 Days a Stranger. The graphics are greatly improved from the previous games in the series. While the backgrounds are drawn in a similar simple style, the characters are more detailed and move more realistically. The resolution is still the old VGA 320x200, so the aesthetic is decidedly retro, but the style looks quite professional. The introduction and end credits also feature several nice drawings, which raise the perceived production values significantly. The level of polish throughout is impressive, featuring a good-looking interface with an appropriate handwriting font, a stylish main menu, and no serious bugs or ugly glitches. My only nitpick is that the dialogue font looks ugly, with the characters all uneven heights.

The production values are even more impressive considering that this is a fairly long game for an Underground adventure. On a second playthrough, knowing the solutions to all the puzzles, it took me about five hours to complete. I am a slow, methodical player, though, and others may not get the same mileage from it. However, be prepared to spend a full evening on the game, especially if you get stuck on any of the puzzles. The length is pretty much ideal. The game feels substantial without overstaying its welcome.

The standard edition of Trilby's Notes is available as a free download. Yahtzee has also created a special edition of the game, which he offers to people who donate $5 USD or more to his PayPal account. The game itself is nearly identical in the two versions; the only difference is a slightly extended cutscene (really just more dialogue) at the end of the game. However, the special edition comes with a commentary (text) track where Yahtzee discusses the game and its production. I found many of his comments pretty interesting, but he does not go into any great depth or reveal anything too surprising. The special edition also includes the soundtrack in MIDI format and a Word file with the documents Trilby discovers in the course of the game.

What our readers think of Trilby’s Notes

Trilby's Notes is the sequel to "7 Days a Skeptic". However, its only value lies in its valuable plot contribution - as a game it's quite awful. I'd recommend for all but the masochistic to... Read the review »