We get a small commission from any books sold.
Written by
Berian Morgan Williams — October 13, 2006

No doubt every adventure gamer has at least heard of Maniac Mansion, though because of its age, many have never played it, and perhaps some are unaware of its importance to the genre. At the time of its release, it was the second adventure game from industry legends LucasArts (who went by the name Lucasfilm Games up until 1990), and one of the most important pioneers of the now ubiquitous point-and-click concept.

Maniac Mansion was the first game to use LucasArts' SCUMM game engine. Indeed, SCUMM itself stands for Script Creation Utility for Maniac Mansion, although many non-MM games were eventually made with it and its descendents. And speaking of firsts, it was also the initial adventure game developed by Ron Gilbert, who went on to create the Monkey Island series, as well as a number of popular games for children with Humongous Entertainment. Gilbert designed the game with Gary Winnick, as well as being project lead and one of the two lead programmers of the SCUMM system. Winnick also served as artist and animator.

The game was initially released for the Commodore 64 in 1987, and was followed in 1988 by ports for IBM PC and compatibles (plain old PCs, to those not versed in classic-gamingspeak), Amiga, Apple II, and Atari ST. Jaleco released a version of the game for the Nintendo Entertainment System in Japan in 1988 (and in Europe and the US in 1990). This edition was heavily edited and censored due to Nintendo's policy of only releasing games that were family-friendly and inoffensive (for details of this, read The Expurgation of Maniac Mansion by Douglas Crockford, who worked on the NES translation). That was the version I first played as a child, but this review will focus on the full, unedited version: naked statues, exploding hamsters and all. 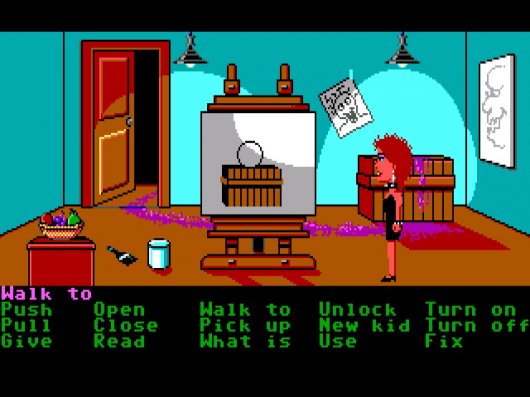 So far we've covered a lot of the historical and technological background to the game, but what about the game itself? Maniac Mansion tells the story of a young man named Dave, whose girlfriend Sandy has been kidnapped by the evil Doctor Edison and imprisoned in the Edison family's mansion. Before setting off on your quest to save Sandy, you must choose two friends to accompany Dave (from six possible). You can switch between your three playable characters at any time in order to use each person's skills to solve puzzles in a number of different ways. Some of the gang are more talented with technical tasks like repairs, while others have the strength to force things open, some are more artistic and musical, and so on. One of these characters is Bernard Bernoulli, who later returns in Day of the Tentacle, the sequel to Maniac Mansion.

At the start of the game, all we know is that Dr. Edison has taken Sandy to his mansion, and that twenty years ago a meteor fell to Earth close to the mansion. The simple premise of the game is getting into the house, finding Sandy, and trying to thwart the evil scientist's plans. This reliance on such a basic foundation means that story isn't really Maniac Mansion's strong point. The lack of a progressive plot leaves the game rather freeform and unstructured, without anything to really aim for aside from the ultimate goal. This results in a lot of exploration as you wander around the mansion trying to find out where the heck the Edisons have hidden Sandy. This focus on exploration over narrative might be a turn-off for those more used to recent story-driven epics like The Longest Journey games, but if, like me, you play adventures more for the settings and puzzles, MM has those in spades.

There are a variety of ways to accomplish your tasks, which can be completed in almost any order. And depending on the combination of player characters you chose and the paths you take, the game is playable in many different ways. Such freedom is almost unheard of in the adventure genre nowadays, and perhaps hasn't ever really been replicated to this degree in nearly two decades since Maniac Mansion first appeared. Even games that offer different ways of accomplishing tasks usually end up with the same conclusion at the game's end. Maniac Mansion avoids this repetition with three or four distinct endings. Unfortunately, this open-endedness means MM is one of the few, if not only, LucasArts games with "walking deads", where it is impossible to complete the game due to some vital piece of inventory or action that was missed earlier. It is also possible to die in several places, unlike most later LucasArts games. These deaths are rarely undeserved or frustrating, though, and each of the ten or so possible deaths and game-overs are amusing and worth experiencing for the fun of it. 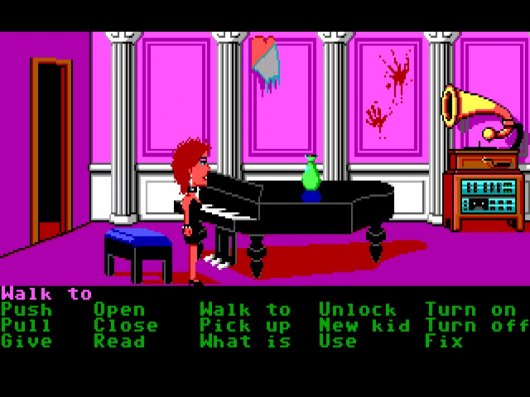 Not only the deaths are weird and wonderful, however. The whole game has a dark comic atmosphere (albeit a fairly mild, mid-1980s videogame version). After all, this is a game about a mad professor who kidnaps a young girl at the behest of an evil meteor, and threatens to perform experiments on her 'pretty little brains'. Along the way, Dave and his gang will run into a mummified Edison family member, a man-eating plant, and two weird humanoid tentacle thingies (one of whom is evil, the other good). What else can you expect when entering a mansion with the legend "warning!! trespassers will be horribly mutilated" on the gate?

The game can be divided into five or six main tasks, although these are never really stated explicitly in the game. Some of the goals involve the house owners and inhabitants, and the occasional cutscene is used to show what the residents are up to. These scenes help players know where they're located, to either avoid them or encounter them as circumstances require. Each of the tasks can be accomplished by any of the characters utilising their specific skills, with a little leg-work being done by the other two accompanying characters. Jeff seems to be the only exception to this rule, since he has no specialist skills to rely on like the others do.

Although the mansion is relatively large, it's not all accessible at first, so after your initial wanderings, there remains little to do but work out ways to unlock previously-unreachable parts of the mansion. The puzzles in the game are all inventory-based and are rarely difficult, being mostly a matter of working out which of your vast collection of keys and foodstuffs to use at any given time. These puzzles tend to involve getting around some obstacle, be it a locked door or one of the house owners, until you ultimately gain access to Sandy's location. Experienced gamers ought to be able to finish MM within a few hours with each set of distinct characters. 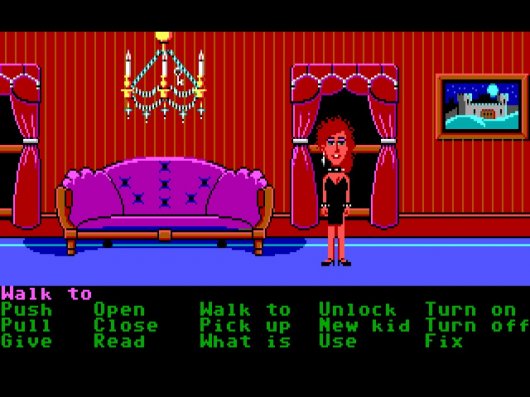 There is no real dialogue in the game, at least not any instigated by players. There's no 'talk' option in the interface, so what few conversations that exist occur during cutscenes, usually between the occupants of the mansion. This means that the player characters have no dialogue, and no real personalities. All we ever really find out about them is their skills, and, through their reactions to certain situations, their fears. These fears present an occasional obstacle -- for instance, one character might be afraid of the tentacles who live in the mansion, while others are content to approach them without fear. These reactions are few and far between, however, which leaves us with minimal characterisation for our protagonists. The mansion's occupants are better represented, with frequent cutscenes and their living conditions giving hints as to their personalities. Quite a few puzzles involve these characters' wants and needs, so working out what they like is necessary to succeed.

As the first game to use SCUMM, MM utilises the by-now-familiar verb selection interface, where a verb is selected from a choice of fifteen at the bottom of the screen, followed by an object chosen from somewhere in the current room or the character's inventory. In this original SCUMM version, the 'what is' verb must be selected before an object's title becomes visible. This makes identifying interactive items more laborious than in the later SCUMM games. Annoyingly, there is also no option to 'look at' or 'examine' hotspots, only 'read' them. So if something doesn't have any writing on it, you're out of luck, description-wise. There are a huge number of items to take and use, though, and many of the fifty or so objects are useless to each individual player character. You may very well end up only needing to use a third of your collected items to finish the game. This again goes to emphasise the variety of ways each task can be completed, with certain items being effectively interchangeable. During the game it can be necessary to swap items from playable character to playable character, and this is achieved by using the 'give' verb on a nearby teammate. 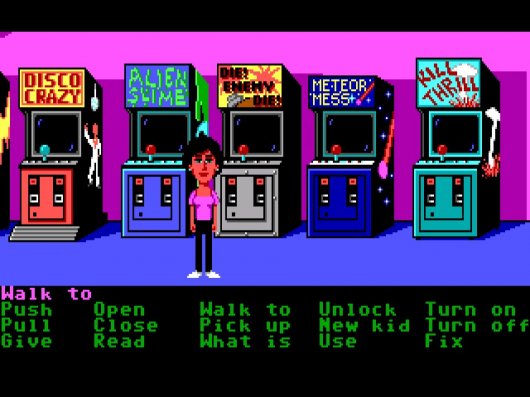 Being released in 1987 for now-antiquated platforms, some players might encounter difficulty playing MM on today's machines. Fear not, however, as Maniac Mansion can now be played on a number of platforms not originally supported (including Linux, Mac OS X, Dreamcast, PocketPC, PalmOS, AmigaOS, BeOS, OS/2, PSP, PS2, SymbianOS/EPOC and more). The game is also playable on more modern PCs that might not natively support such an old game by using the appropriately-titled ScummVM. Or in what is probably the best "easter egg" of all time, if you happen to have Day of the Tentacle, you can also play the full version of MM from inside the sequel by using the computer in Weird Ed's bedroom.

There are two main versions of Maniac Mansion for the PC, known as 'original' and 'enhanced'. The plot, puzzles and game content are identical in both, with only the presentation affected. The graphics in the enhanced version are more refined and crisp, with less blockiness. To further confuse matters, because of the differences in the various graphics adapters available to PC owners in the late '80s, there were also a number of sub-versions of the original and enhanced editions, with different resolutions and colour depths. The screenshots below compare two identical scenes from the enhanced and original versions in 16-colour, as well as a screen from the 4-colour and monochrome (Hercules) original forms. While the enhanced EGA graphics may be considered poor by today's standards, they are substantially better than the other versions.

An important piece of gaming history that every self-respecting adventure gamer should experience once, and offers enough solid gameplay to make it worthwhile.

GAME INFO Maniac Mansion is an adventure game by LucasArts released in 1987 for GameBoy Advance, Mac, PC and Retro. It has a Comic cartoon style and is played in a Third-Person perspective.