Review for Frasse and the Peas of Kejick

We get a small commission from any books sold.
Written by
Luke Jensen — April 19, 2006

When somebody asks me what kinds of adventure games I like best, I have no problem admitting that I'm a big fan of Sierra's games, particularly titles like King's Quest. Something about the lighthearted feel of those types of games has always appealed to me. That's why I'm always glad when a game like Trumgottist Entertainment's Frasse and the Peas of Kejick comes along.

The game puts players in control of Frasse, a furry blue monster, and his best friend Gurra, a green, armless, frog-like creature, as the duo attempts to recover the priceless Peas of Kejick from the clutches of a fire-breathing dragon. The dual-protagonist approach is the game's most distinctive feature, especially since players usually control Frasse and Gurra onscreen at the same time. A simple click on Frasse or Gurra shifts control from one character to the other.

Each character has his own strengths and weaknesses, which adds a certain amount of strategy to the gameplay. Since he doesn't have arms, for instance, Gurra can't pick things up, leaving Frasse to handle inventory items. At the same time, Frasse isn't a very good communicator, and prefers to leave more extensive, topic-driven conversations to his amphibian buddy. 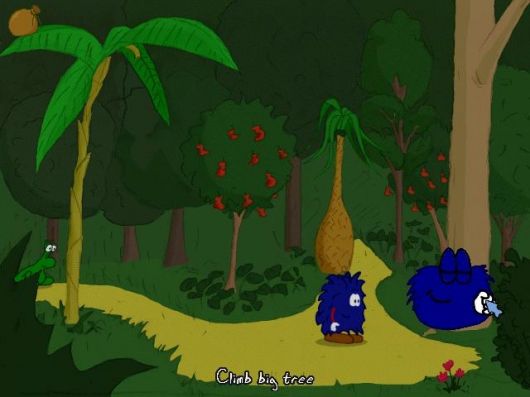 The game world itself is a little small—as would probably be expected in an independent game—but I never felt boxed in or limited. The game is broken into four or five "stages" that seamlessly blend into each other. Each stage of the game has its own major objective, and once it's completed, players advance to the next part of the game and can't backtrack. The first stage of the game takes place on the small island Frasse and Gurra call home. After learning of their quest to locate the Peas and deliver them to the king of the realm, they must journey across the sea to Kejick Island itself, find a way up the isle's legendary peak, nab the veggies, then deliver them to the castle and claim their reward. Each of these steps in their journey is self-contained, so players always have a good idea what they're supposed to do next. 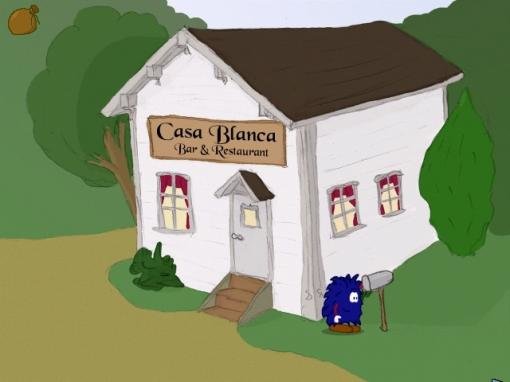 Of course, it wouldn't be an adventure game if Frasse and Gurra could just accomplish their mission without some snags along the way. Most of the time, they have to help a character reach a goal or remove some obvious obstacle in their path. It may not be too innovative in the story progression department, but the game's major quests are nonetheless fun to figure out and are often quite humorous. Fans of Dr. Seuss, for instance, will instantly notice an appearance by a pair of characters inspired by one of the venerable author's books, who must be dealt with in a very unique way before Frasse and Gurra can continue their quest. 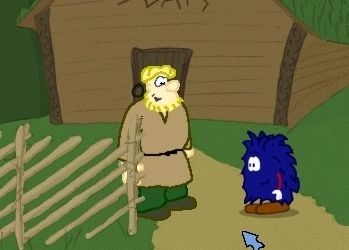 The game, which uses the SLUDGE engine, has an interface which immediately reminded me of games like The Longest Journey. Hotspots are referred to by name at the bottom of the screen. Clicking on one displays an image of either Frasse's or Gurra's body, which serves as an action selector. With Frasse selected, players can choose from standard options like "examine," "pick up," and "talk to." Gurra's action menu is similar, with the notable and sometimes comical addition of verbs like "kick" and "eat."

I was instantly impressed by the cohesiveness of Frasse's design. It's very obvious that Rikard Peterson, the developer, put an amazing amount of thought into his creation, especially considering that it's an independent freeware game. In an age when too many indie games seem to be haphazardly executed, this one often shines.

The puzzles are mostly of the classic "use-inventory-item-on-hotspot" variety, but there's a smattering of physical activity-based puzzles too, some of which require carrying an object that won't fit in Frasse's inventory—such as a wooden crate or a huge wheel of cheese—to another location and positioning it in a particular place onscreen. Most puzzles are logical, but a few nonetheless left me clamoring for helpful nudges because they were a little on the obscure side.

One of the first puzzles in the game fits that category, and something as simple as a subtle text message would save players from undue frustration. However, there aren't many of those puzzles, so by and large, they don't detract from the experience when they do rear their ugly heads. Nevertheless, I found a maze puzzle about two-thirds of the way through the game quite confusing; the maze can't be mapped in the traditional way, and it can take a little time to figure out its secret. 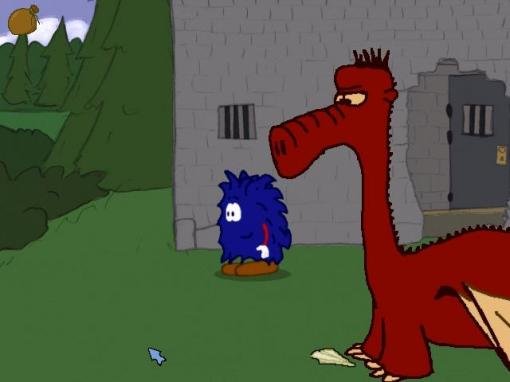 The game's graphics make it obvious that Frasse isn't a commercial offering, but in no way does that mean they're poorly done. The hand-drawn backgrounds and character animations may lack professional polish, but that's part of the game's charm. They're vivid and colorful nonetheless, which helps to give the characters and the locations they inhabit a real sense of personality.

Unlike in many games, especially independent ones, music accompanies and complements every region you explore. The digital tunes add to the character of the game as much as the graphics do. There are no sound effects, and as is the case with most independent games, there's no voice acting either.

The game can be enjoyed by just about anyone, but there are a few in-jokes that fans of classic adventure series will immediately notice, particularly a running gag inspired by the Monkey Island games. However, setting the gag in motion requires the player to talk to a certain character, then talk to him again about something you encounter on your travels. While I uncovered the optional gag, some may not, so you may want to play the game again to see any witty dialogue you may have missed. This, along with the fact that a few puzzles have more than one solution, gives the game a certain degree of replay value that most independent games don't have.

Frasse and the Peas of Kejick is an outstanding debut adventure, and most players probably won't need more than five hours to finish it while going at a leisurely pace. It has some rough edges and a couple of slightly obscure puzzles, but it's still a charming little game that does a great job of filling the void left by the relative absence of these types of adventures in this day and age. Perhaps best of all, though, is that it seems to hint at possible future adventures for our friends Frasse and Gurra, and if their first escapade is any indication, that's a good thing.