We get a small commission from any books sold.
All Bitmap Books
Written by
Laura MacDonald — January 17, 2006

Lately there seems to be a shortage of high-end adventure games. Fortunately for gamers, indie projects frequently surface and provide some playable distraction and fun in between those "highly anticipated" releases. In fact, with the proliferation of low cost/free game engines and an increased interest in freelance game development, independent titles are appearing in increasing numbers for sale. No longer limited to shareware or freeware status, these games are budget-priced with clear commercial aspirations.

These games can present a dilemma for a reviewer. Obviously, with funding almost non-existent and created largely through "sweat equity", it is somewhat unreasonable to weigh their merits against professionally developed games. On the other hand, if people are paying for a product, it must stand and be counted for its value alone. I installed Hope Springs Eternal, the second game from Swedish developers Mikael and Eleen Nyqvist, with this in mind. Since their first game, Remedy, showed a promising beginning, I was curious to see how this newest game would build on the original.

When the first screen opens, what you see is what you can expect throughout this game. Bright, watercolor styled images, a familiar mouse-oriented interface, with a lovely bit of music playing in the background, and a solitary, peaceful pace of play. No sense of hurrying to find a story, characters or even challenges – this is a leisurely stroll of a game. Although Hope Springs Eternal, like its predecessor, doesn't remotely break any new ground or gaming expectations, it does have a definite charm all its own. 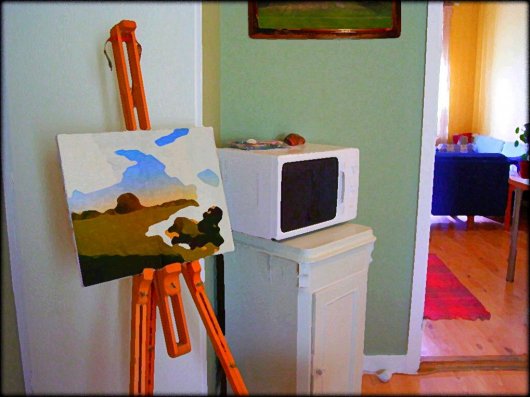 The game features a young British woman, Carol Reed, who has settled in Sweden in the hopes of becoming a successful private detective. She gets a jump start on her dreams when Conrad Vogel, the private detective she met in Remedy, decides to retire and offers to sell his business. She quickly accepts his deal and settles in, eager to go to work. Unfortunately, other than the occasional call about a lost cat, clients aren't exactly knocking down her door. Finally, just when it seems her phone will never ring, she gets her first case.

Katarina Vogel, Conrad's sister and a teacher at the local school, has a problem. Katarina has become close friends with Anna Bergion, a young woman who recently joined the school staff. Unfortunately, her new friend hasn't been to work in days and has vanished without a trace. Although Katarina is very worried, she admits Anna may have left for her own reasons, and she is hesitant to get the police involved. So she believes Carol is her only hope. Without hesitation, Carol accepts the case and takes off for Anna's home to start her investigation. She uncovers clues along the trail that hint at a dark mystery surrounding Ana's disappearance, including a brutal murder, greed, a lost love and possible conspiracy. If she wants to solve this case, Carol will have to search locations with great care and sharpen her interview skills, because she runs across a number of people along the way.

The filmed characters are a pleasant part of the game. They are presented in still frames, and while they change positions as lines are voiced and frames change, there is no actual video movement attached to their images. The characters all have a sort of quirky charm to them, and some of them appear downright eccentric. One fellow is loaded down with piercings, while a museum tour guide is dressed in some sort of zen monk attire. Unfortunately, what could have been a stronger selling point is diminished by the lack of actual character backstories and details. However, the diversity of characters still adds some sparkle to a rather classically designed, first-person slideshow game. 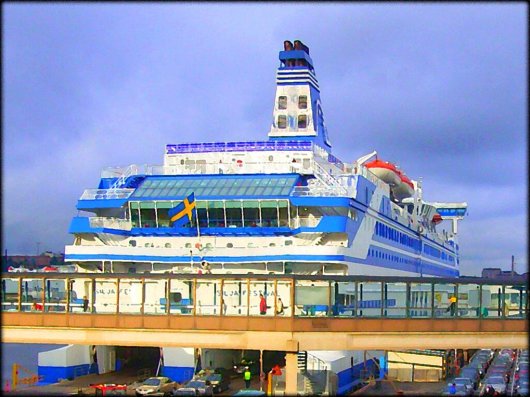 Character voice work, while somewhat monotonal, rarely distracts and is acceptable. The dialogues themselves are natural sounding and fairly well written. Though there is the odd awkward translation here and there, it has little impact on the game.

Where the game truly shines is in its graphical approach and style. Each photograph-based frame has been colorized with a bright watercolor effect, giving a distinctive look to the backgrounds. The results are charming and gives Hope Springs Eternal a unique appearance not normally found in such games. The one flaw with this style is that the muted line quality and blurred edges to much of the background detail can make it difficult to pick out interactive spots and smaller objects. But even with those small drawbacks, the look of the game is a definite plus.

The game icons match up with the softened graphics, featuring what appears to be a finger-paint handprint and other interaction shortcuts in the same crayon blue. The underlying photographs used as the basis for the game frames were carefully planned and well chosen. All views maximize the interplay of light and shadows, creating an airy ambiance that works very well with the colorful hues and softened edges. There are also some individual items added to the background frames that are left with their natural look rather than enhanced with the watercolor treatment. These items add a nice layered look of detail and variation. 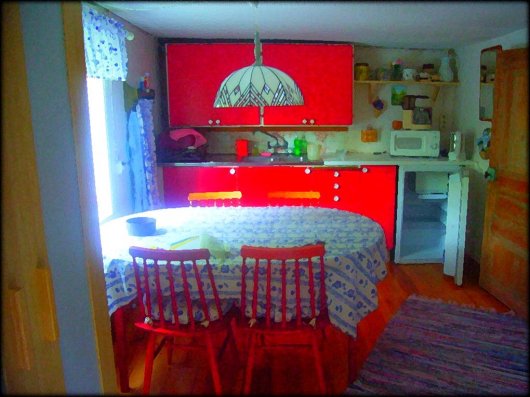 The game features a wide range of locations to visit, though the node-based movement and static camera views can limit your ability to explore, and some large locations have exits and pathways that are difficult to locate. This causes some outdoor areas to feel more maze-like than open ended, and more generous exit marking could have prevented this. Fortunately, the views themselves are pretty and interactive enough to keep you moving along.

Most of the challenges involve searching for items to add to your inventory. Nothing in the game is too counter-intuitive, so you can figure out pretty fast what type of inventory item you need to have. Finding the critical object is another matter. In some cases, there are things that look significant and interactive, but can't be accessed or picked up until triggered. These don't pose a problem, as you simply make note of them for later use and can easily go back to get them. Unfortunately, there are also objects that don't highlight at all when you first run across them, so it is very easy to miss things that might be vital to advancing the game. Experienced gamers, when missing an obviously needed inventory item of some particular type, know to go back and re-check an older locale to see if anything new pops up. But casual gamers who would be the most likely to enjoy other aspects of Hope Springs Eternal might find themselves wandering clueless for some time looking for whatever they are missing.

To add another layer of confusion, a number of triggered close-up views have no associated comment or interaction, and they never have any relevance to advancing the game. Why they are highlighted, other than as possible red herrings, is not clear. Whatever the reason, this seems like a missed opportunity to layer some additional interactive depth to the game. 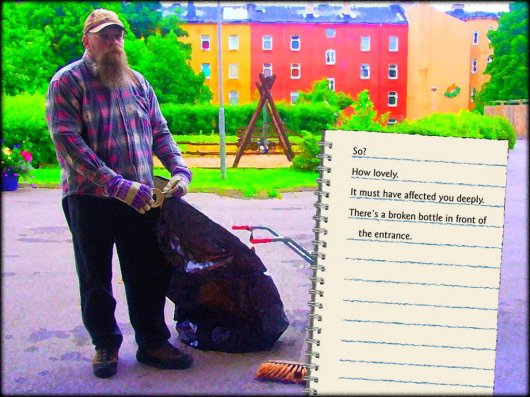 Finally, there are also some standalone puzzles, such as a slider (yes one of those) and an interactive quiz, among others. These are all set up well and shouldn't stump most players. One nice touch is a "skip" button, so that any puzzle can be bypassed. This is great feature for casual gamers, particularly since there's no real penalty to using this feature, other than a loss of a star from your final rating for each time the feature is used.

The overall atmosphere of the game is pleasant, and the music has a dreamy, peaceful quality to it and never intrudes. Selections vary from one environment to the next, with a unique style and sound. There are some sound effects sprinkled here and there that complement the game – birds singing, water in a fountain – but unlike the music, these feel sparse and could have been more liberally used.

As far as length, an experienced gamer would probably finish the game in six (or less) hours of gameplay. I don't think the story in Hope Springs Eternal is short as much as it is short-changed. There are obvious references to a much deeper story everywhere you go. While the story you uncover has enough meat on the bone to push you along to the end, it is somewhat disappointing to see it served in such a diet "lite" manner. 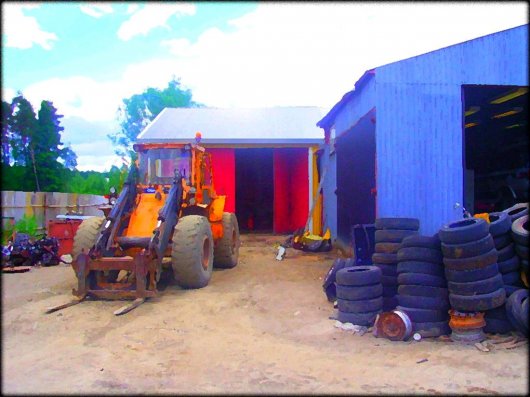 So what is the final word on Hope Springs Eternal? It's a charmingly presented, unpretentious game. It doesn't advance much on the promise of the first game, but it does take a baby step forward in terms of game length, story complexity, and range of characters and environments. As with Remedy, the game is only available at the developer's website, where you can also download a playable demo to see for yourself.

If your idea of pleasing gameplay is to leisurely stroll through a delightful game world populated by some gentle locals, with fairly simple challenges, this game is well worth a look. You'll have to live with some unclued inventory item hunting and related backtracking, but at the reasonable purchase price, you will probably enjoy yourself for a few afternoons. For experienced gamers, the game may feel more like a quaint, unambitious game. Still, it has enough going for it to keep it in mind for those long lulls when you want something pleasant and distracting while waiting for the big ticket games.

Hope Springs Eternal has a charming, unique look and ambiance, though it short changes what promised to be a detailed, twisty plot. With its simplistic design, the game will please more casual adventure gamers, but others might want to save this game for leaner times.

GAME INFO Hope Springs Eternal is an adventure game by MDNA Games released in 2005 for PC. It has a Stylized art style and is played in a First-Person perspective.

What our readers think of Hope Springs Eternal

Good: *Great musical score: it really enhances the mood of the environments you visit. *Fun puzzles, all of them quite logical but the famous "remedy" look-behind-you corners can make you overlook some items (i love... Read the review »