Birth of the Phoenix

The Adventures of Maddog Williams in the Dungeons of Duridian

We get a small commission from any books sold.
All Bitmap Books
Written by
Rob Michaud — October 21, 2005

If there's one thing the Internet has taught us, it's that no matter how seemingly dated or obscure your passion is, there are people out there that share it. Somewhere out there right now is another person watching a silent movie and wondering why they ever quit making them. Somewhere else, another person is playing a lute and bemoaning the existence of the electric guitar. And for all the talk of adventure gaming being a dead genre, the people who love them create new adventures every day. And one of the most burgeoning sub-genres, even years after its supposed downfall, is the text adventure.

Back when text games were still a dominant force in the market, companies like Infocom released classics like Zork, A Mind Forever Voyaging, and Planetfall. Unlike today, when you open your game box and pull out a CD and usually nothing else, those days you would be inundated with tchotchkes like maps, compasses, ID badges, and more.

Today the text adventure -- now going by the name of Interactive Fiction -- is much less of a force to be reckoned with, but it is definitely alive and well with archives of available games and even yearly adventure game competitions showcasing the best writers of the genre. And there are still companies out there providing commercial games. Companies like Malinche Entertainment, whose fourth game, The First Mile, is perfect for that late night chill-fest that's so rare in gaming today. 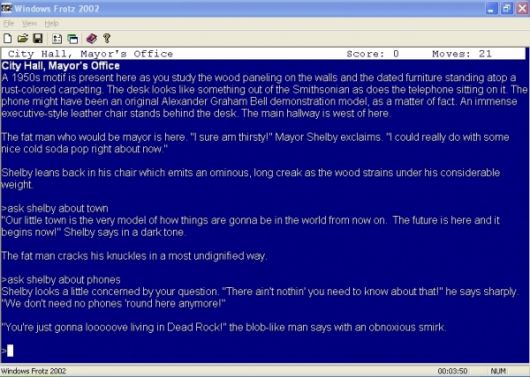 True to their roots, Malinche has put out a product to rival the games that they obviously loved, even releasing a folio edition with a compass and a handwritten sticky note like the one you'll find in the game. And while a few more things would have been greatly appreciated, like a map or maybe a copy of a diary found later in the game, this is a nice addition, and a throwback to the time when the things that came with a game were almost as fun as the game itself.

You play the game as an unnamed protagonist on your way to Las Vegas to start over. Low on gas, you stop at the first station you see, on the outskirts of the little town of Dead Rock, Arkansas, arriving just in time to see a violent confrontation turn deadly. And standing over a corpse, out of gas, in a seemingly empty town, you set off to find your way out of Dead Rock, and along the way find out the fate of the town and its occupants.

Text adventures live and die by their story, and rest assured, this is a great one. As with all good horror stories, a simple beginning turns to chaos as the plot is revealed. The pacing is slow enough at first to build tension without getting boring as you wander the empty streets, throwing out a creepy little tidbit here and there to keep you unsettled before all hell breaks loose. And by the end, with the mysteries solved and your final score displayed, your only thought will most likely be how much you want to experience it again. 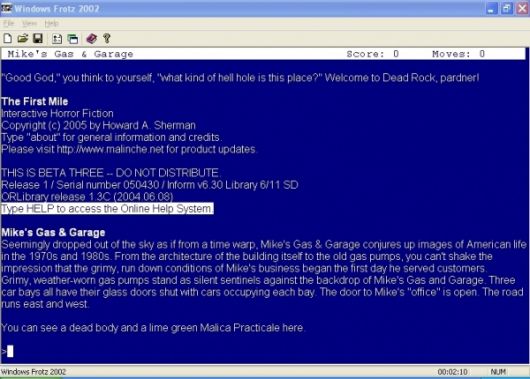 Obviously since this is a text-based game, there's nothing that can really be said about graphics and sound. Some text adventures will include static pictures and even some sound here and there, but TFM is text only and proud of it. And frankly, I'm glad. There's nothing that can be shown on a computer screen that will be scarier than what is in your head, and The First Mile capitalizes on that with wonderful descriptions that leave just enough space to let your mind play with them.

The gameplay in TFM is pretty standard for IF games, but with some nice variations thrown in, like non-player characters that will follow you around, extremely open-ended gameplay, and multiple solutions for most of the puzzles that will reward you for your ingenuity.

Younger gamers may not have experienced this, but I remember spending hours in front of the computer with a pad of graphing paper, diligently mapping out screens while playing my favorite games, trying not to get lost. The First Mile brought all of that joy right back to me. This is a huge game, and even an experienced gamer could easily spend twenty or more hours getting to the end on the first run-through, so get that graph paper out and get those pencils sharpened because you're going to need them.

Navigation follows the conventions of the genre, and is handled with text directions (N for north, S for south, etc.). On each screen is a description of your location and a list of available objects that can be manipulated, examined, or picked up.

Speaking of objects, as with any adventure game, you should pick up anything not nailed down, but keep in mind that you can only hold so much. And while you will find a way to carry more objects later in the game, inventory management is key in making it through to the end. One issue with many games of this genre is that it's easy to miss objects if you don't examine every nook and cranny of each location, and TFM is no exception. It is extremely easy to miss an item if you're not diligent in your searching, although unlike most games, with multiple ways to solve each puzzle, missing an item here and there won't necessarily mean a complete halt to your game. But that's not to say there aren't plenty of things to bring your adventure to an end. This is a game that has no qualms about killing you off in a variety of gruesome ways, so make sure to save often.

The parser used in the game is fairly extensive and recognizes a large number of phrases. And like most good text games, it has no problems poking fun at you if it thinks you've done something worthy of it.

Puzzles are mostly inventory-based, without the ubiquitous fetch quests that we've all come to expect. There is a scoring system in place to award points as you play through the game, with different puzzle solutions garnering you different point amounts. This lends a nice replay value to the game as you try out different solutions in order to eke out that last point.

With such a large game world, it can be confusing where to go and what to do next. But Malinche has you covered there. If you get stuck, you can actually email the company and they will send you back personalized hints to help you along your way.

One of the questions that is going to be asked is why you should be paying for this game when there are so many freeware text games available online. To be honest, it is a little pricey for a text game, with the folio edition running $30 (U.S.) before shipping, and a download-only version for $20. But for the length of play time you'll get out of the game, combined with the replay factor in trying to max out your points and try different puzzle solutions, it is money well spent in either case.

And no complaining about not being able to find a copy either. Just log onto the Malinche Entertainment website and you'll be able to purchase a copy of the game online, by fax, by mail or by phone. And if that weren't enough, Malinche has released the game for PC, Mac, cell phones, and even iPod. There's even a demo available as well, for those who like to try before they buy.

It's nice to see companies carrying on the tradition and taking the risk to put out commercial Interactive Fiction in this day and age. The First Mile is not a game for beginner text gamers, due to its open-ended nature and difficulty, but anyone with a love for text adventures and looking for a challenge would be well advised to pick up a copy.

A lengthy, challenging game that will keep you glancing over your shoulder the whole time you're playing it.

GAME INFO The First Mile is an adventure game by Malinche Entertainment released in 2005 for Mac and PC. It has a style and is played in a perspective.

What our readers think of The First Mile