continue reading below
»   Home  /  Articles  / Features  / A History of Holmes

A History of Holmes

Sherlock Holmes and his loyal comrade Dr. Watson have come a long way on our computer screens leading up to this week's release of The Case of the Silver Earring. Before we all get ready to dive into Sherlock's latest PC adventure, let's take some time and take a look back at the course he's charted through adventure gaming over the years. 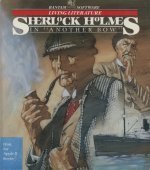 The intrepid detective made his PC debut in this graphically enhanced interactive fiction title, which although decidedly lacking in puzzles was very well-liked for its lengthy writing and skillful storytelling. The plot takes place late in Holmes' life, as he finds mystery aboard a travelling steamship. The game is full of conversations and supporting characters, and the overall mystery is broken down into six smaller cases.

The text parser may throw off many modern adventurers, but those who love Sherlock stories will find much to love in the writing and the trademark Holmes mystery-making should they seek out a copy of this long-forgotten game.

The second Sherlock adventure ditched the graphical enhancements and went to a full text-based interface--the only pretty pictures will be those in your head. Still, Vatican Cameos has some cool features (besides boasting what certainly must be the coolest subtitle of a Holmes adventure), such as the well-ahead-of-its-time feature of NPC's with an agenda who move around on their own free will.

The writing and storytelling are not as critically acclaimed as those in Another Bow, and the interface drastically limits the number of understood verbs. Still, the mystery aspects will certainly appeal to Holmes enthusiasts--if for no other reason than to say they've played every Holmes game!

The virtual adventures of Sherlock Holmes took a huge leap towards the world of graphics in the early 1990's--and what a leap it was, with what some believe to be the very first multimedia PC CD-ROM game ever released. The game featured a then-shocking full 90 minutes of video with real live actors playing all the characters--something never seen at that point in the annals of computer gaming.

The problems, of course, were indicative of the problems that would haunt FMV games for years to come: the game was completely linear and completely unplayable. These days, it's an absolute nightmare to run on a modern system, but it was the pinnacle of technology at its time, and is almost worth more as a museum piece and a work of art than as a true Sherlock Holmes mystery.

(Addendum: It should be clarified that there were three volumes of the Consulting Detective series, each with three cases. Also, a new version of the original set of cases has been released in interactive DVD format; visit the website for more information.)

So how does the world's greatest detective follow two text games and a full-motion video adventure? With one of the greatest adventures ever. Just turn the page for more!

The torch was passed to the very obscure developer Mythos Software in 1992...and the result was absolutely one of the finest adventure games ever produced. Bulky title aside, Serrated Scalpel raised the bar for mystery games, and the entire adventure genre. With a fantastically written plot, a story told as well as that in any game of the genre, a massive amount of well-written dialogue, and trademark Holmes-Watson banter on a level nearly equalling Sir Arthur Conan Doyle at his best, this was truly an adventure for the ages.

The story began with an actress, murdered in an apparent robbery gone bad outside of the theater she performs at. Is it the return of the Ripper? The beginning of a new serial killer? The mystery unfolds and unfolds, and the identity and motivation of her killer is revealed only 60% into the game--with plenty more mystery layers to peel away after that point!

Twelve years later, the sheer brilliance and volume of the plot and dialogue have barely if ever been rivaled in a mystery--or any traditional adventure game, period. For more information, read the game's Top 20 entry.

The Lost Files of Sherlock Holmes: The Case of the Rose Tattoo

Four years after Serrated Scalpel--and unfortunately, a year into the decline of adventures as a commercially viable genre--Mythos made every effort to outdo themselves with Rose Tattoo, their second Sherlock adventure. It was nothing if not ambitious, boasting 50+ locations and 90+ characters. In keeping with the changing times, this Lost Files game boasted full voice-acting for all characters, with all the voices done by authentic Victorian actors. The background art in all the scenes is incredibly detailed, almost to the game's detriment; the background narrative and item descriptions are written with even more detail, clearly by those very knowledgable about the Sherlockian era of Victorian London.

The game's ambition proved to be its downfall; the amount of locations to visit and characters to talk to was almost too much to handle, lacking the perfect balance of its predecessor. Although a fantastic and compelling story was told, the gaming public's taste was turning away from these sorts of games towards lighter fare, and Rose Tattoo was not a commercial success--ensuring it would be the final Lost Files game. For more information, read the Adventure Gamers review.

The Mystery of the Mummy

Seven years after the premature end of the Lost Files series, Frogwares picked up the torch and brought Sherlock into a whole other perspective--the first-person adventure. The result was decidedly mixed; although featuring great voicework and another ambitious, typically Sherlockian story, the storytelling and plot development that had been done so well in so many Sherlock games got a little lost beneath the large array of puzzles. The game's length was also lacking compared to previous games in the series.

Though not a bad game by any means--even more impressive coming from a first-time developer--Mystery of the Mummy was more a victim of the insanely high standards set by the two Lost Files games and appears destined to be remembered more for its mediocrity than anything else. For more information, read the Adventure Gamers review.

But wait! Frogwares has not had their final say in Sherlock Holmes lore, and when The Case of the Silver Earring hits shelves--with a third-person style that recalls the great Lost Files games--we will see where its place will be in history. After all these years, the game, once again, is afoot!