It is with great pleasure that we can exclusively reveal the very first image of the as-yet-untitled next chapter in the The Longest Journey saga. Included are the signatures of the design and art leads, and a bit of information regarding how the season is celebrated in Arcadia.

The concept image is a blend of a real-time 3D scene and some post-editing, but designer Ragnar Tornquist says it accurately reflects the quality of the game's final graphics. The image should give you a hint about the look of the game, as well as the time of year the story takes place. Fans will no doubt recognize the Journeyman Inn, as well as the Elgwan, a creature with a turtle shell on its back.

Besides the image you're seeing now, little else is known about this game. The project has been referred to as anything from The Longest Journey 2 and The Longest Journey: .Static to TLJ-Next. We expect the game will be fully revealed at E3 2004 (May 12-14), which is when we'll presumably hear the final title. We know at this point that the game will feature a new protagonist named Zoë, but April Ryan will be strongly involved as a supporting character. For more, read the interview we conducted with Ragnar Tornquist earlier this year.

From all of us at Adventure Gamers, to all of you--Merry Christmas! 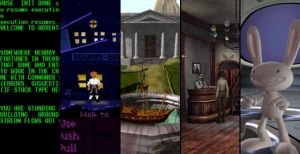