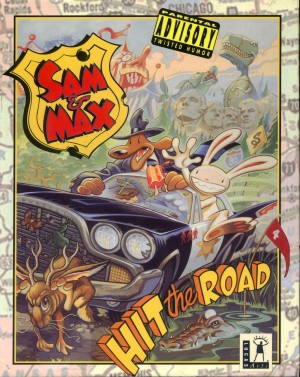 We get a small commission from any books sold.
All Bitmap Books
Written by
Joonas Linkola — March 5, 2004

What do you get when you take a country-western singer, a bunch of 1950's detective movies, some cheesy roadside attractions and a few abominable snowmen and put them into a blender with a canine shamus and a hyperkinetic rabbit? Either an all-singing, all-dancing hairy hybrid in black-and-white or Sam & Max Hit the Road, a 1993 LucasArts graphic adventure. Hide the women, children and kittens, it's the Freelance Police!

In case you've never had the pleasure to read the Sam & Max comic series (shame on you!), here's a brief introduction by its creator, Steve Purcell:

Sam and Max are a pair of overzealous crime fighters. They call themselves Freelance Police because it gives them some unspecified license to do whatever they want. Sam is a six foot dog in a baggy gray suit and sharp fedora. Max is a three foot naked rabbity thing who sometimes packs a German Luger somewhere on his person. They roll through the streets in a smoking 1960 DeSoto Adventurer painted to look like a black and white squad car searching for wrongs to right, innocents to defend and jelly-filled sugar donuts to devour. 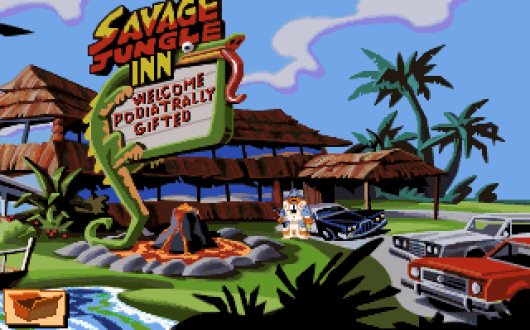 The story kick-starts when Sam and Max receive "yet another idiotic and baffling assignment" from the Comissioner: a bigfoot named Bruno has escaped from a nearby carnival and our freelance duo is called to investigate the course of events. What at first appears to be your usual, ordinary, standard, everyday yeti-on-loose case soon turns out to be something much more complicated and will have Sam and Max travel all over the American continent in search of clues.

"My mind is a swirling miasma of scintillating thoughts and turgid ideas."

The atmosphere of the game is appropriately cheesy, with a jazzy musical score and colorful cartoon graphics. Anyone following the comic series will be right at home with the game's visuals. A few scenes also include 3D rendered elements which blend in surprisingly well. Since it's a parody of old detective flicks, you can even choose to play the game in black and white to achieve a true "cheesy retro ambience." The smooth jazz tracks make up the majority of the background score, but you'll also hear blues, some tribal and medieval themes, surfer rock and lots of country, including an intentionally horrendous song called "King of the Creatures."

"Gratuitous acts of senseless violence are MY forte!"

Although Sam & Max Hit the Road may look like a cartoon, it's most definitely not designed for kids. There are many visual jokes, but the backbone of the game is in its witty dialogue. Good language skills are required to truly appreciate it as the humor strongly relies on verbal acrobatics, on the use of polysyllabic words, old English and other such oddities. There are also lots of references to politics, films, celebrities and pop culture in general. This doesn't mean that Hit the Road is meant only for people with an IQ higher than 180, though - there are many levels of fun to be had, and this only guarantees that the game has lots of replayability value: the next time you're playing it, you may get a movie reference you didn't notice earlier. 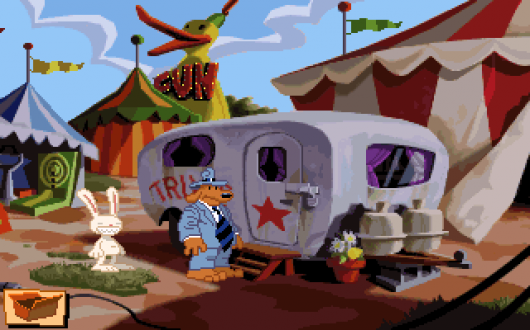 "It's places like this that make me wish I were a Canadian."

Sam and Max's investigations will take them to interesting roadside attractions such as the World's Largest Ball of Twine, Celebrity Vegetable Museum, Alligator Golf, Mystery Vortex, Mt. Rushmore (where you can bungee jump from a president's nose) and several Snuckey's service stations, to name just a few. They'll also meet a wide range of dynamic personalities, among whom are the world-renowned country-western singer Conroy Bumpus, Trixie the Giraffe-Necked Girl, a whole tribe of bigfoots and the psychedelic moleman named Shuv-Oohl. Although these are mostly original locations and characters not previously seen, they are still coherent with the anarchist attitude of the comic series.

"We'd like some fine Bavarian food sprinkled with umlauts, please."

The voice-acting in the CD-ROM version is mostly high quality and especially the lead characters have very fitting voices that add to the comical duo's wisecracking attitude. Another favorite of mine was the swearing, tool-bending Uri Geller clone: the swear words were hilariously and consistently censored with the all-familiar "beep" sound in the speech and with asterisks, semicolons and other special characters in the subtitles. Let's hear it for political correctness! 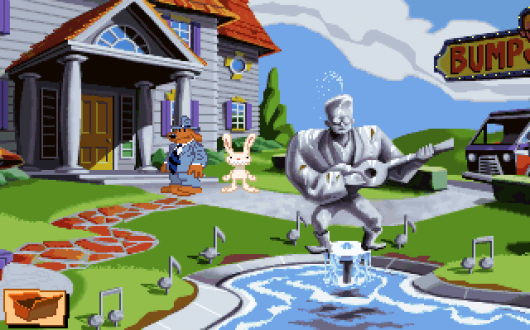 "It's scary to watch you wrestle with abstract concepts, Max."

Much to the horror of their fans, LucasArts decided not to use the tried-and-true verb interface with Hit the Road and instead introduced a new icon-based system which, at the time, took a moment to get used to but which today feels all familiar and comfortable. The interface includes five basic commands (walk, examine, take, use, talk to). In the game, the player controls Sam only - Max will follow and usually entertain himself (and the player) by doing something crazy in the background. On several occasions Max is needed to "confront, subdue, and pummel the suspected perpetrator," though.

The puzzles in Hit the Road are pretty standard for the genre, consisting mostly of object-based problems. The inventory can be used to combine items and this feature is often used to create the most imaginative of things. In the familiar LucasArts tradition, the player can try even the stupidest things in the game as one can't die or get stuck in it. Even if the player gets only temporarily stuck, there's no need to quit the game - Hit the Road is packed with several independent subgames, such as Highway Surfing and the hilarious Wak-A-Rat.

"Your sadism is a credit to your profession."

Sam & Max Hit the Road is a classic, much like the 1960 DeSoto Adventurer our protagonists use in the game to travel across the continent. It's definitely one of the funniest games I've played - even after completing it half a dozen times, it still keeps surprising me with new puns and one-liners. Even if you never had the chance to read the comics, this game is "a must" for any adventure gamer, if only for liberal education of the defining games in the genre.

It's a must for adventure games; the humor still keeps surprising me. Highest recommendation.

What our readers think of Sam & Max Hit the Road