We get a small commission from any books sold.
All Bitmap Books
Written by
Claire Wood — September 17, 2003

LucasArts based the world of Full Throttle in a bleak industrialised future around an enigmatic anti-hero, with an original and compelling story. Ben Whatsisname, leader of outlawed biker gang the Polecats, is soon embroiled in a devious executive’s corporate ambitions, and forced to clear his name against a backdrop of murder, betrayal and lots and lots of motorbikes.

Although often criticised for its short playing time, sustaining some gamers for no more than a single sitting, it is a measure of the originality of the plot and memorable characters that has ensured Full Throttle a reprieve from the adventure gaming scrap yard. Clearly it was a stroke of genius to place a rugged biker in the lead role, as opposed to the sometimes overwrought formula of do-gooding princes and fluffy woodland animals.

The characters you encounter in Full Throttle are a strong feature of the game. Cast as Ben’s foil is the Machiavellian executive Adrian Ripburger, who intends to take over Corley Motors, turning it into a minivan manufacturer. Ben is also flanked by love interest Maureen, a nonchalant toaster-mechanic-come-biker who plays a pivotal role in the plot. Other characters range from country yokels to Ripburger’s henchmen. Newspaper reporter Miranda is also notable, due to the depraved nature of her journalism and fantastically irritating voice. The quality of the voice acting is an important part of the characters’ appeal. Roy Conrad, God rest his soul, is superbly cast in the role of rugged outlaw Ben, giving the character a gritty, raw quality, while Mark Hamill provides the measured, calculating tones of Ripburger. 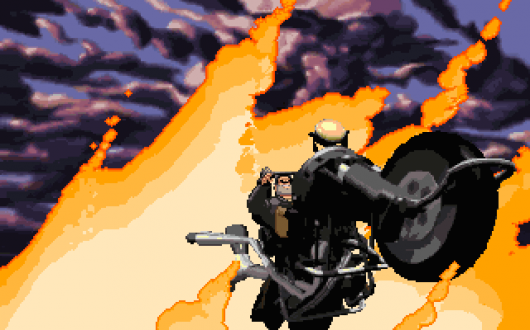 The game’s soundtrack adds to Full Throttle’s cinematic feel, featuring music by biker rock band The Gone Jackals. Although this hard rock style wasn’t personally to my taste, it was perfect in the context of the game, providing an authentic backdrop to many of the cut scenes. Other musical elements include ambient looped themes which generally blend in seamlessly (although the country western anthem, “Chitlins, Whiskey & Skirt” becomes somewhat irritating).

There is a diversity of graphics in the game, ranging from bleak desert landscapes to the desolate industrialism of scenes at Corville, home of Corley Motors. Some of the graphics are noteworthy, particularly the close-ups of vehicles, although the characters are often blocky in the foreground. The animations are smooth, and many of the cut scenes (particularly the introductory sequence) were superb, setting the tone for the entire game. On subsequent run-throughs, I found myself creating save-game slots just before favourite scenes because of their innate watchability.

Regarding the style and difficulty of puzzles, the tasks are assigned at the start of each segment of the game. Unfortunately, these tasks are designated in such an overstated manner that they may as well be tattooed to your forehead. You’ll certainly never be at a loss for what to do. Experienced gamers will either find this charming or horribly condescending. Personally I’d like to think that when one’s central protagonist is a rugged biker, he could do without such excessive handholding. Puzzles are largely straight-forward, centred on the acquisition of items for the next stage of your quest. Some puzzles are more challenging, requiring a degree of lateral thinking. Although critically shortening playing time, simplistic puzzles do compliment the fast-paced plot, and emphasise the games underlying “brawn not brains” strategy that is well-suited to a rough biker leader. 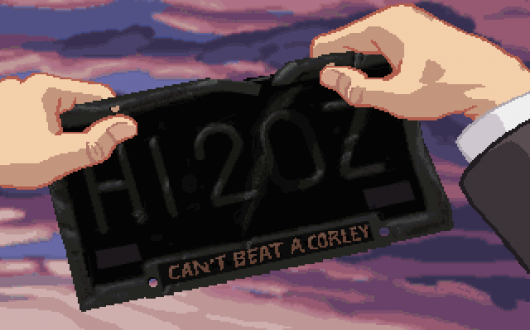 True to form, these simplistic puzzles are accompanied by a user-friendly interface. Clicking on an object with the left-hand button produces the main interface, an attractive skull, from which the regular look, talk and use verbs can be deployed. In this case, the result of such actions was generally “look,” “shout/ threaten” or “punch/ kick.” In this case, a more physical approach was endearing, adding an element of realism unseen in other adventures, where heroes are prepared to undertake a ridiculous amount of tasks to open a door, where a little brute force would easily have sufficed. While a marked departure from the traditional SCUMM interface, the skull is a pleasure to use and is completely unobtrusive, allowing a greater sense of immersion in the adventure and a refreshing approach to problems.

A note on the action sequences: I avoid action sequences wherever possible, not only because I dislike them, but because I am not very good at them. Other purists will be disappointed that there is no opportunity to bypass the action sequences at Old Mine Road, where Ben must tackle other bikers, and later in a Demolition Derby. Despite the latter being an essential part of the plot, I found the unresponsive controls degenerate into random and feverish clicking on my part.

In conclusion, if you enjoy talking to fluffy woodland creatures and slaying dragons, Full Throttle is probably best avoided; certainly the appeal of a game that is bleak, dark and edgy isn’t universal. The major criticism of Full Throttle is its short length – indeed, simplistic puzzles mean the plot unfolds at a breathtaking pace. Although the quality of immersion is excellent, it is somewhat transient, no doubt leaving many feeling short-changed. In the end, though, the intrigue and originality of the story make it a very important adventure game for all fans of the genre.

Full Throttle is available at:

The memorable characters and above-average graphics and music assure that it belongs out of the adventure scrap heap.

GAME INFO Full Throttle is an adventure game by LucasArts released in 1995 for Mac and PC. It has a Stylized art style, presented in 2D or 2.5D and is played in a Third-Person perspective.

What our readers think of Full Throttle

This game is an instant classic. The main character is the typical charismatic badass, the soundtrack is amazing, the voice acting is superb and the storyline is as good as it gets. Even though the... Read the review »

The greatest game ever!

To me, Full Throttle is the greatest game that I've ever played. I've played this game from start to finish many times and I still do from time to time, and I give it 5... Read the review »