Dust: A Tale of the Wired West review

Dust: A Tale of the Wired West is a fun, ambitious title from the talented folks at Cyberflix. An entertaining romp through a dusty New Mexico town in the 1880s, it’s a game that has many virtues, but its flaws keep it from being a genuine classic.

Dust is a first person point-and-click adventure in which you play a mysterious, handsome, unnamed stranger. After an atmospheric opening cinematic in which your character crosses a dangerous outlaw named The Kid, the game begins with you moseying into the desperate desert town of Diamond Back. Through the town’s frightened, scheming inhabitants, you gradually learn the huge backstory to the game, which includes a displaced Indian tribe, bounty hunters that are tracking a poker player, lost treasure, murder, a confidence scheme involving a pyrite mine, and . . . oh, gee, that’s just the tip of the iceberg. Not to mention the fact that the town (surprise surprise) is without a sheriff. Hmm . . . a career opportunity for the Stranger?

Clearly, your character has a lot of catching up to do, and this is done largely through conversation. There is A LOT of conversation in Dust, and your reaction to the game will largely be affected by how much dialog you like in a game. Generally the dialog is entertaining, well-performed, and well-programmed, but it was more talk than I was interested in participating in. After a few hours of the game, I empathized with a character who kept cutting conversation off with the curt remark, "I’m DONE conversatin’." 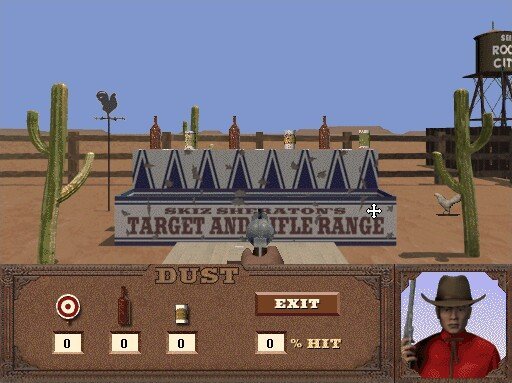 However, for dialog lovers, this game is a feast.

The game is full of nice visual detail, like animated farm animals, buzzards, and some especially welcome tumbleweeds. The interface shows your character’s upper torso and face, and there are nice animations to enjoy here, too, such as a slight sneer to his lip when The Kid shows up.

Also, the game provides a convincing and fully explorable small town, with a handy map to aid navigation. There is a nice sense of reality and freedom as you move through this complex story. There’s even a helpful character who provides clues when you need it. 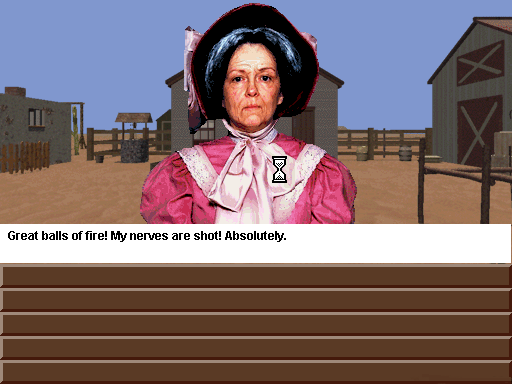 The gameplay is varied, including a certain amount of inventory-gathering, information gathering through all that conversation, and, in the endgame sequence, a certain amount of Timelapse-esque twiddleware puzzles. This variety is one of the game’s major strengths. In fact, the game designers took a big risk with the mystic finale sequence, which could seem out of place to some players. However, I considered it to be a rich and unexpected finale to an already good game. Good endgames are rare in our genre, and I appreciated this one.

The gameplay does include a strong action element as well, and this will be a dealbreaker for pure adventurists who have no patience for arcade elements in their games. There are two major gunfights and a final showdown with The Kid. Many players have complained about the difficulty of the gunfights in this game. I have to say that I thought they were a riot – challenging enough to be fun, but never impossibly difficult. (Maybe it’s just all that time in the 80s I spent in Times Square video arcades paying off.) Like another more recent Cyberflix title, Redjack, I really enjoyed the action element of the game, and felt like it added a bit of spice without totally skewing the games genre identity. And, like Redjack, Dust contains an opportunity to "train" in the necessary action skills.

The characters are generally fun and entertaining. One particular character (a certain doctor) had me wondering how Cyberflix avoided a lawsuit, and I really enjoyed an outrageous faux French loser named Buick Riviera. One character is quite disappointing, however, and that is the Indian woman Sonoma. I don’t mind cliché characters in a story like this, and most of the characters in Dust are entertaining clichés . However, what’s the point of using a BORING cliché? Remember the bland moonfaced woman who used to hawk Mazola margarine on TV? "With the natural goodness of maize." Well, Sonoma is her even more boring sister. 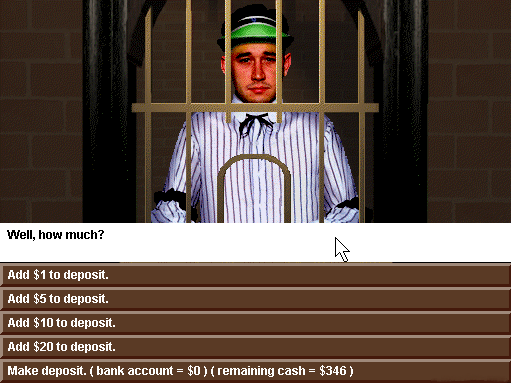 On to what I didn’t like about the game.

As ambitious as the game is, I feel it technically overreaches itself at times. First of all, the game is visually quite disjointed. There are three basic visual elements: cinematic cutscenes, standard gameplay visuals, and closeup character visuals. The cutscenes are fluid, beautifully done 3D computer graphics, the gameplay visuals are low-grade 3D with lots of pixilation, and the character closeups are sort of choppy video puppets. This game is from 1995, and I’m sure we’re dealing with technical limitations here, but more care should have been taken to pull the three main elements together. For example, the clothes the characters are wearing in the gameplay visuals and the closeups don’t always even match! The game looks as if there were three different design teams working separately without enough communication between them. One of the things I loved the most about Cyberflix’s Redjack was its beautiful unity of design, and I missed that in Dust.

Also, there are some problems caused by sloppy programming. Here’s an example. The game is divided into five days, and in the first day, your game choices can lead you to having a fistfight with a local bully, or avoiding the fight (in fact, the entire scene) altogether. Unfortunately, even if you don’t have the fight, when you begin the next day, you find all the characters behaving as if you DID have the fight. This type of thing caused a lot of confusion for me in several places in the game. Also, keeping track of all the characters names can become confusing. This problem is made even worse in the way the other characters talk to your character. I don’t mind playing someone with no name, but it’s confusing to be called "Kid" when there’s another major character with the same name.

Another problem is a lack of logic in the inventory gathering. To pick a single example . . . would it occur to YOU to seek birdseed from an undertaker? Me, either. This problem results in the dreaded "try every inventory object with everyone and every thing" type of gameplay that is unworthy of a game of this caliber.

GAME INFO Dust: A Tale of the Wired West is an adventure game by Cyberflix released in 1995 for PC. It has a Illustrated realism style and is played in a First-Person perspective.

What our readers think of Dust: A Tale of the Wired West