I bet even Howard Phillips Lovecraft, visionary supernaturalist that he was, would be quite surprised to find how well his cosmic horror – written a century ago, no less – would meld with a dystopian future in which mankind is on the brink of collapse, slaves to their own degenerative vices. But that’s exactly what indie Turkish developer Stormling Studios is able to pull off with their first-person horror adventure Transient. Though the game’s narrative ultimately fails to live up to its potential and ends terribly abruptly, it’s the intriguing marriage of these two seemingly disparate elements that still manages to impress.

Transient presents a fascinating sci-fi world, though a large amount of it is built up in your imagination rather than actually shown in-game, fleshed out through text logs, glances out of the perpetually rain-streaked windows of your dingy high-rise apartment, and even the very furnishings within the flat. You are Randolph Carter, member of an elite undercover infiltration team known as ODIN, a morally dubious unit that specializes in meta-shamanism. By fusing futuristic hacking technology with consciousness-altering drugs to stealthily insert themselves into Cyber Enclaves – more pleasant digital realms used as an escape from the harsh misery of their crumbling world – its agents are able to attain information and sell it to the highest bidder. Now someone, or something, is hunting down the members of ODIN one by one, and Carter must get to the bottom of his inexplicable dreams of alien races on distant planets to keep from being the next victim.

The world of Transient has suffered a great cataclysm, with most of the population, hopelessly addicted to their Cyber Enclaves, now living in domed mega cities. To make matters worse, rumors of something else – something slimy skittering in the recesses of unlit alleys, something ancient from the stars – have recently begun to surface. Carter himself is suffering some recent memory loss; he and his team were apparently on the trail of something big, but he has no recollection of what it may have been. Meanwhile, the dreams he experiences as a side effect of the drugs needed to perform his meta-shamanistic rituals are becoming increasingly troubling. 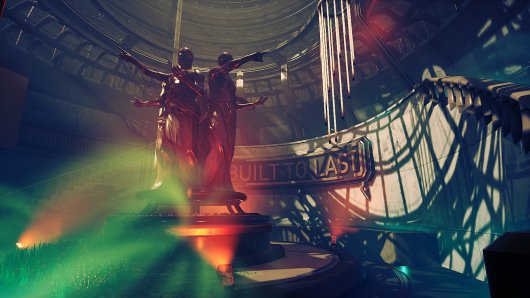 It’s pleasantly surprising how effortlessly this dystopian vision of a grimy, hopeless future where everything and everyone is jacked into the digital realm melds with Lovecraftian cosmic horror of ancient beings wholly dedicated to decimating humanity. I absolutely love the waking world of this game, which is why I am so saddened by the fact that I felt a little limited in my interactions with it, while the dream world offers even less, stripping players of almost all agency. The latter is often just a case of walking down long hallways and through large chambers where there’s almost nothing to do apart from pushing a button or opening a door to proceed and do it all again. It feels too much like the experience goes on autopilot during these stretches.

The only times I felt truly able to explore and interface with the world in a meaningful way were the investigation portions that take place in the real world and the Virtual Enclaves Carter splices into. To carry out his detective work, he utilizes a PHI – a perception-heightening implant – that allows him to run various scans and analyses of his surroundings. The implant, which Carter addresses as PHI and which verbally responds to him in kind, adapts its available functions to suit the investigation at hand. You are able to profile dead bodies, analyze blood samples, peer through walls, pilot a small drone through an air vent, and see your next objective marker as you follow a trail of breadcrumbs left by Carter’s deceased team members to help him regain his memory. This sleuthing work makes for a satisfying form of interaction, something that is sorely missing in the dream sequences.

The game’s length plays a major factor here, too. At about four hours in total, split between its two major planes of reality, there simply isn’t enough time devoted to sufficiently building up atmosphere and lore for players to soak in. The writing is well thought-out, and the science behind the technology solid, with several direct references to Lovecraft and his writings. But what I really wanted was for Transient to let it all breathe a bit more, spread its story out over a longer, more satisfying investigation, to really make a slower burn out of the protagonist’s all-important descent into madness. 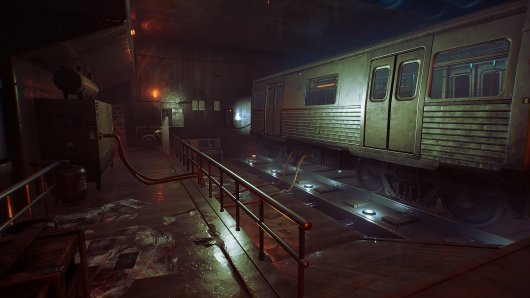 Instead, the game pursues its objective of getting to the bottom of Carter’s dreams with such single-minded determination that it ends up running roughshod over any attempts to create immersion in this highly intriguing world. And when the climax does finally pop up (unexpectedly and completely out of the blue, no less), it doesn’t offer anything more than a weak, highly unsatisfying cliffhanger ending that took me completely aback and really undermined my enjoyment of what led up to it.

Packed into its short duration, on top of some more traditional puzzles like solving a poem to unlock a door, or researching the right combination of chemicals to concoct a mind-altering substance, are several one-off mini-games. One is a hacking simulation in which you move a marker around a grid, attempting to reach intel packages while dodging the scanning pulses sent out by stationary security node sensors. The other two are literal games-within-a-game, worked into the story as pieces of software that a fellow ODIN member was developing in his spare time. One is a retro-inspired, low-poly take on old-school Resident Evil, complete with fixed camera angles, tank controls, and zombies to take down; the other is a level of a crude Doom-like first-person shooter. None of these are optional, but they don’t take long to complete, after which they’re forgotten about and not seen again. Diversions like these are a neat idea, even if they would feel less like filler in a longer game.

The presentation does its part in making me wish for a more substantial way to feel part of this world. Everything looks gorgeous: what we get to see of the domed mega-city of Providence is dank and beautifully nasty, the rotten remains of what should have been a great technological marvel. Buildings are all but gutted, claustrophobic alleyways are choked by masses of cables running every which way, while the titanic structures of this concrete jungle towering overhead make you feel suitably insignificant. Nods to the Great Old Ones are strewn throughout, occasionally as on-the-nose as seeing a neon advertisement promoting the nearby club Cthulhu. 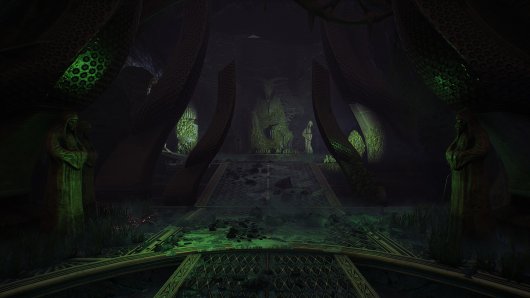 The game overwhelmingly utilizes a color palette of cool blues, sickening greens, and hostile reds to lend an unwelcoming air to both the city of Providence and the vast, unfamiliar dreamscapes of Carter’s subconscious mind. Both locations also make liberal use of the kind of alien geometry and grotesque statues of (sometimes familiar) monstrous visages Lovecraft might have conjured up. The voice acting and soundtrack, which consists mostly of atmospheric noises and creepy vibes, also do a fine job in adding a bit of tension to the mix – there’s never any actual danger, and the Old Gods themselves don’t put in any personal appearances (save for the odd tentacle or two), but one can’t help but feel some trepidation entering a dank sewer on the trail of a murderer that may or may not be human when the sound of scuttling can already be heard from within.

With all it has going for it, it’s a shame that Transient finds itself running into trouble more than I’d like. It starts off as a neat concept of combining two seemingly disparate ideas and getting surprisingly positive results. However, a well-realized world with intriguing graphical design and engaging lore is only as good as the level of interaction the player is given to immerse themselves in it, and on that front the game comes up short. Couple that with a short runtime that feels slightly padded by mini-games and is cut off far too suddenly, and you’ve got a game that sees you hurriedly passing through rather than being invited to stay and make yourself at home.

Transient deserves recognition for seamlessly concocting a stunning blend of sci-fi and Lovecraftian horror, but it deserves more space to fully come to fruition than what it’s afforded here.

GAME INFO Transient is an adventure game by Stormling Studios released in 2020 for PC, PlayStation 4 and Xbox One. It has a Illustrated realism style, presented in Realtime 3D and is played in a First-Person perspective. You can download Transient from: We get a small commission from any game you buy through these links.
The Good:
The Bad:
The Good:
The Bad:

What our readers think of Transient