The Hand of Glory review

The year 2020 was undoubtedly terrible for many things, but at least adventure gaming wasn't one of them. One of the year's most conventional releases was The Hand of Glory, though it was launched rather unconventionally in two distinct parts throughout the year. It’s complete now at last, and whilst there are a few issues with Madit Entertainment's globetrotting adventure, there is also lots to enjoy too, including its Broken Sword-style pairing of lead characters, a huge story spanning many locations, and even some exciting timed puzzle sequences to shake up the usual slower pace and more cerebral gameplay. All of these elements add up to what seems to be an anomaly in this day and age – a nuts and bolts, old-fashioned point-and-click game that can still delight and entertain a modern-day audience.

In The Hand of Glory, you play as LAZARUS BUNDYYYY (as he often likes to shout, as loudly as possible), a once-star Miami detective who's fallen from grace following a bungled attempt to catch the dangerous serial killer known as Blowtorch. Desperate to get his job back after being suspended from the force, our wannabe Sherlock Holmes decides to secretly investigate a new case of the disappearance of local teenager Kathrin Mulzberg, in the hope that success will grant him another crack at the detective role he gets such a buzz out of.

Of course, things spiral out of control and along the way to uncovering what's really going on you'll travel to several locations across the city, from a sewer network to the Mulzberg family's imposing mansion. In the second part, you'll leave Miami for the trattorias of Italy, and even visit England (and naturally, a pub) for a spell. A map highlighting the different places you can visit in each area pops up once you exit a location (though confusingly, it's not available until you've gone past a certain stage in the beginning chapter of the game). Arrive at a location and it's a simple matter of using a left mouse-click on objects that can be interacted with and right-click to examine them if the cursor appears as a red arrow – or only examine them with either if your cursor appears as a magnifying glass. 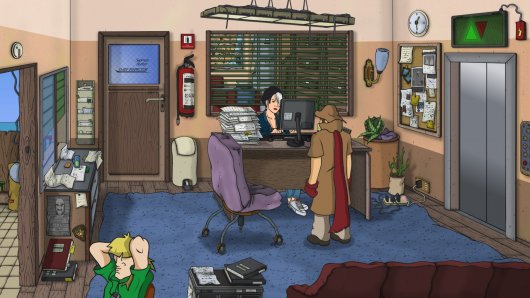 Helpfully there's also a hotspot indicator if you press the mouse wheel, which is especially useful as the developers have peppered scenes with plenty of items to scrutinise and/or pick up and put in your inventory. A notebook is another handy addition to your arsenal, keeping track of your latest objectives, whether it’s finding the ingredients for a dish of succulent meatballs or gathering materials to scare an old woman (some of the more amusing and bizarre tasks Lazarus finds himself getting tangled up in during his mission).

Amongst these goals you could also include “trying not to die,” as there are several more frantic instances where Lazarus can get killed. Thankfully, even if this does happen the game will restart only a few seconds before Mr Bundy meets his impending doom, so there's little Sierra-like frustration with suddenly meeting your maker. These timed sequences, such as hanging on for dear life on top of a speeding car, where one or two false moves can end in disaster, add a nice change of pace to the game proper, although you will begin to question just how many times Lazarus can fail to remember to bring a gun along considering the sheer amount of scrapes he ends up in!

Although these setups are for the most part fun and exciting, certain complex puzzles, especially in the first half of the game, require much larger leaps of logic and highlight The Hand of Glory's lack of hint system. One in particular sees you trying to open a set of drawers in a certain order, which needs you to jump through several hoops of infuriating logic to understand what on earth you should be doing. I eventually ended up grasping for a walkthrough for help. 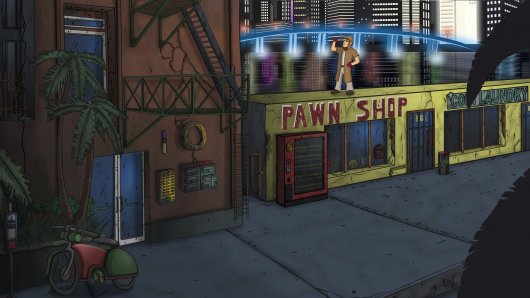 Fortunately there are only two such puzzles that are confusing to the point of frustration, with most others being signposted much more clearly. Case in point: a poster about winter sports advertises how “the cold gives you energy” when you're searching for ways to restart a dead battery. A few more clues along this vein for the trickier puzzles, or some form of overt hints would have made all the difference when things got decidedly more testing.

In the second half of the game, a few puzzles stand out for their inventiveness, including one where you switch briefly to the perspective of an old man suffering from dementia, in which you have to try to recall an important memory by literally piecing it together as a jigsaw puzzle. Another sees you researching a lead using an in-game computer, typing in phrases you think are relevant from your searches, reminiscent of Her Story, until you find what you're looking for. It’s great to have a few different styles of puzzles in these sections, complementing the usual inventory “click-and-combine” types.

Whilst most of the game sees you play as Lazarus (or Lars to his friends), there's also plenty of interaction with Alice, a young intern at the police department who's wise beyond her years and helps the detective out on his adventure. You even get to play as Alice in a few sections. As the story unfolds in part two, there are more chances to do so, and these sections feel more fun compared to Lars's more sombre ones, mainly due to a plot reveal that sees Lars feeling rather morbid for a lot of the second half. Whilst the change in tone playing as Miami's once finest detective is understandable given his predicament, it does make for a drearier time as a player, so getting to fool flirtatious Italian men as Alice is a welcome break from the gloom. 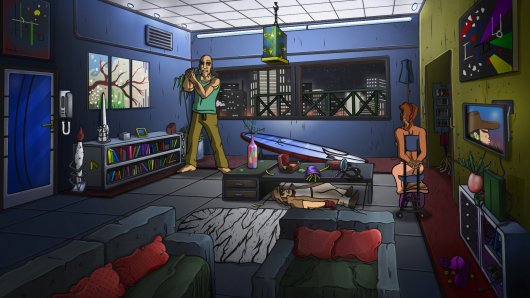 As well as solving puzzles herself, Alice also possesses a special skill that can help her get out of tricky situations. Being a former student in the art of kinesics, she's able to study the behaviour of people around her to create a “profile” of them. This basically boils down to matching up people's expressions and gestures from a list of possible options (e.g. do crossed arms mean a defensive position or demonstration of force?) and from these conclusions drawing a general hypothesis about the character's state of mind (e.g. they're insecure), which will then open up new dialogue options for Alice to use. Though pretty easy, it's another refreshing break from the main routine of picking up and combining items, so it's a bit of a shame Alice's power can only really be used two or three times throughout the full game. It ends up being more of a mini-game rather than a fully blown game mechanic, but it's a nice diversion all the same.

Voice acting is relatively strong for the large cast of characters, from the poor, easily frightened house cleaner to a feuding builder and blacksmith, with Matthew Curtis's loud and occasionally just a tad hammy Lazarus a highlight. One may question why nearly every character he meets in Italy seems to have an American rather than Italian accent, but that's probably better than any having a comically stereotypical one. Instrumental music refrains loop in and out of scenes, only sporadically becoming irritating if you find yourself lingering too long in one place to work out a particularly taxing puzzle. Every location has been hand-drawn in 2D with a slight cartoonish feel, and whilst characters’ facial animations in particular appear a little rough around the edges, the backdrops themselves evoke the bustling sun-kissed streets of Miami or lush greenery of an Italian mountainside with charm and sparkle.

The story takes several dramatic twists and turns, and should last around twelve hours from start to finish, depending on how stuck you get on some of the harder bits. Those who played the first half way back in mid–2020 may find themselves scratching their heads when starting back up for the second half, as there's little to no recap given, which is surprising given the amount of plot strands left hanging by the end of part one. For those just beginning the full game now, of course, that will no longer be an issue. 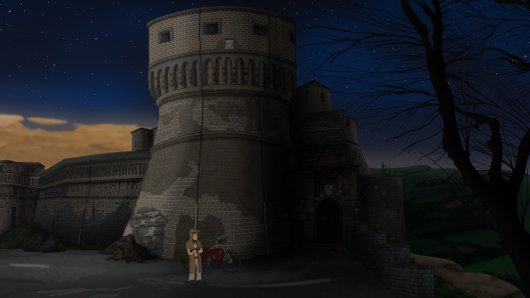 There's a lot more drama saved for the game's finale, where sadly the plot starts to collapse under the weight of explaining its numerous characters and conspiracies, leaving me honestly a little confused as to what was going on. It's a bit of an anti-climax to an ambitious mystery that feels like it needed a little more editing and clarity to truly reach its storytelling potential.

Whilst most narrative threads do get tied up by the end, a couple are left open, suggesting that this may not be the last we ever see of Lazarus Bundy. And that would be very welcome, as despite a couple of devious puzzles and one or two confusing plot points, there are enough genuinely inventive and entertaining moments in the detective’s debut outing that makes another possible Hand of Glory adventure an enticing prospect.

The frustration of one or two ambiguous puzzles can’t dampen one’s spirits for The Hand of Glory, a love letter to traditional point-and-click adventure games with its own sense of fun and wit.

What our readers think of The Hand of Glory