We get a small commission from any books sold.
All Bitmap Books
Written by
Tuomas Rantalainen — July 8, 2020

My expectations going into Phantom Path were fairly grounded. The premise of the game seemed to offer a barebones story about a dangerous forest, a simple backdrop against which sequential levels of puzzle solving would distract me for a few hours. Turns out I underestimated solo developer KEYREAL a great deal, as this indie gem belies its humble origins and ends up feeling like the much lower-budgeted little sibling of genre classics like Portal 2 and The Talos Principle.

At its heart, Phantom Path is an environmental puzzle game with some platforming and stealth, where the goal is to take advantage of a set of tools offered to you to overcome obstacles in your path. New mechanics are gradually introduced, and levels get bigger and more complex as a result. The game does not do much to deviate from the standard 3D puzzler formula, but it does a fine job of executing the familiar elements provided. This, along with a few twists to keep things fresh, the obvious attention paid to detail, and some smart game design help elevate the experience well above the cut.

The story follows a nameless treasure hunter, one of the few souls brave enough to venture into a forest beset by phantoms – evil dark entities of initially unknown origin. While progressing through the self-contained levels, the protagonist discovers the history of the forest and the temple it surrounds, uncovering a cautionary tale about trusting those in power and the cataclysmic event that ensued here. The tale is told exclusively through items found along the way, such as diary entries and letters from previous denizens, or single-line chapters in a book describing the history of the world. Discovering a certain number of these is necessary to achieve the best ending, making it necessary to do more than just blaze through levels. 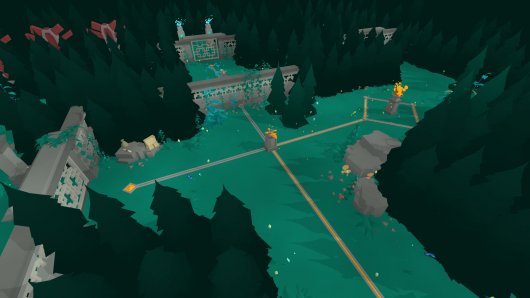 The narrative is minimalistic compared to some other games in the genre, but it manages to have a bigger impact than its initially modest scope might suggest. This is largely thanks to the pacing that builds up to a well-foreshadowed finale, only slightly running out of steam in the home stretch. Even with only a very small amount of exposition, it succeeds in telling a story that feels complete, giving the player a concrete framework and letting one’s imagination fill the gaps.

The visuals are great, for the most part. Each level is presented as a colorful, cel-shaded 3D environment, with an easily controlled camera hovering above the game world at just the right height and distance to maintain focus on the treasure hunter while providing sufficient vantage point. Everything from the art style to the animation is clearly a labor of love, from the way the trees wave in the game’s main menu to the hilarious way a sheep flattens when you jump on it from a platform (achievement unlocked). There are three environments to explore (forest, city and temple), and some criticism can be directed at their lack of variety. It feels like a bit of a wasted opportunity, as the potential for diversity is squandered by the use of largely similar color palettes.  Were it not for just the right game length and new puzzle mechanics introduced at regular intervals, the levels would risk becoming slightly repetitive.

The central tool you’ll use is a lantern that lets you carry different colored lights found lying around. When placed on altars adjacent to doors of the same color, those doors will open. You can only carry one light at a time, and the typical level plays out by opening and closing doors to reveal new paths where more items to progress can be found. Another important component is a beam of energy used to activate teleports or bridges, while the third main mechanic comes in the form of color-coded altars that turn you incorporeal and grant the ability to cross certain barriers. Overcoming obstacles involves some light platforming, but this is never a huge challenge, thanks in part to the tight and simple controls, with both keyboard and mouse doing the job just fine. Movement is responsive, and the two other buttons are for interacting with the environment and for jumping. There are no high-flying antics or mechanics that reach Portal-gun-level of ingenuity, but both navigation and puzzle solving feel intuitive and satisfying. 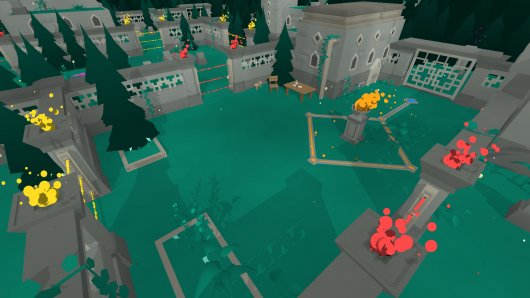 The titular antagonistic phantoms provide the stealth aspect of gameplay. They come in a few different forms, some that are more humanoid appearing seemingly at random places to give brief chase if you get too close, while some are simple balls of energy following predictable routes around the map. They need to be avoided, as you have no way to defend yourself against them. If you find yourself too close to them they will strike you, killing you after a few hits. There are also booby traps, balls of smoke shooting out of unfairly imperceptible holes on walls and pillars, and coming into contact with them means instant death. Dying results in a complete restart of the level in question, with everything, including collectibles and secrets, reset. It’s not a huge problem as these occurrences are few and far between, and they do serve to keep players on their toes, but their unavoidability makes them feel a bit cheap.

To make the game less linear, Phantom Path introduces some branching paths and objects that can be used to open pathways to new levels later. In addition to searching for hidden lore, there are also collectibles to find in the form of treasure. Mercifully, it is possible to locate an item in the game that tells you exactly what you have yet to uncover on each level. Much like the lore tablets, finding a certain amount of treasure is required to beat the game.

The score complements the action well, with much of the soundtrack composed of simple piano music – mystical and slightly ominous, to the point where it gives the otherwise cartoony-looking game world a sense of foreboding. Certain parts of the sound design warrant special mention, such as when a phantom is near you. The alarming tones in those tense moments are genuinely quite scary, and I noticed feeling much more relaxed one time when I played without my headphones. 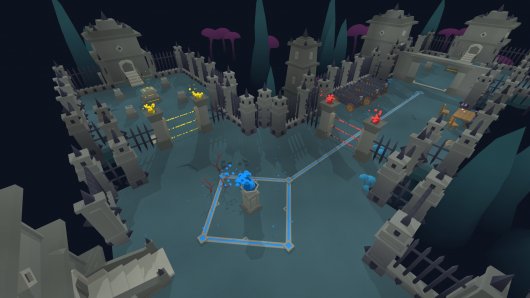 This game is more than simply the sum of its parts, and the less tangible reason I really like it is that everything just works seamlessly together. Phantom Path is not without challenge throughout its eight-hour playtime, but its fluidity means there is nothing even remotely annoying distracting you from the beef of the game. A simple example is that despite there being almost no on-screen display, a translucent dotted line appears between you and any object you are within range of interacting with. The line is unobtrusive, but its appearance makes it easy to quickly use items when possible. With sometimes hundreds of trial and error interactions required during the course of a level, these kinds of smart design decisions go a long way. This feeling of fluidity started to make sense after reading that KEYREAL not only developed the game alone, but also the YUME engine used to run it. Building the tools he needed clearly served him well to create the game he envisioned, and it shows in the polished result.

It can be painful to criticize solo development projects, because even undertaking the herculean task of game design alone is an admirable achievement. In the case of Phantom Path, however, there is no need to pull punches because the result would be commendable even from a team of a much larger size. Location variety and story content are noticeably limited, but the game never feels hollow or repetitive because it manages to squeeze so much out of what it offers. Add to that a charming presentation and smooth gameplay, and I’m happy to recommend Phantom Path to any environmental puzzle fans out there.

Combining smooth gameplay and solid level design, the pieces in Phantom Path click together to form a puzzle game that is easy to pick up but hard to put down.

What our readers think of Phantom Path