Is there a clear divide between reality and fantasy? And if so, can you walk this tightrope without teetering too far one way or the other? Old Gods Rising by Bad Blood Studios expertly tests the parallels and contradictions between truth and imagination, introducing players to a compelling hero with feet of clay, plausible excuses for mysterious anomalies, coy allusions to H. P. Lovecraft, and awesome visuals in the process.

Tom Winston is a history professor known for hosting BBC2's "Finding Britain," who has suffered a recent career setback due to a book he authored in which he naively favored the truth behind certain officially discredited myths. Despite the resulting academic kerfuffle – or perhaps partly because of it – he is contacted by Maz Kayfer, a film director with a dubious track record and the voice of a used car salesman. Maz, an American, has traveled to England’s ancient Ashgate University to shoot his latest horror picture, Old Gods Rising. He asks Tom to meet him at Ashgate and help out as a consultant. When Tom arrives at the college, however, the place seems deserted and cellphone service is down. He finds a walkie-talkie left there for him, and uses this to speak with Maz, who claims to be held up a few miles away.

Curiously, the crew setting up to shoot the movie is absent as well. As Tom ambles around the school grounds, he finds trailers and tables strewn with film equipment, as well as clipboards that mention a problem with toxic and illegal substances. He also discovers that Maz has already gone beyond the classrooms and quads with plans to film nearby caves, huge rock formations, and other bizarre structures. Ashgate has a reputation for odd occurrences and Maz (with Tom’s expert guidance) hopes to take advantage of every quirk. 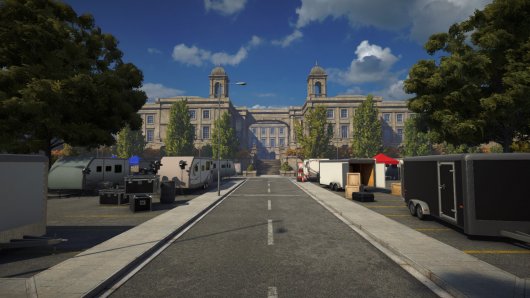 I spent many engaging hours in this first-person 3D adventure exploring the massive campus in a search for the truth about Maz’s hidden agenda and what befell the innocent (or not so innocent) film crew. Gorgeous, colossal architecture abounds: stone columns, graceful arches, balustrades atop staircases, and charming pocket gardens. A multi-roomed gallery features contemporary computer-based art as well as more traditional realism. Venture even farther and you will also encounter creepy underground passages, lush meadows, a gothic amphitheater, and ravaged graves.

In contrast to the spectacular edifices, there’s a whimsical sense of humor that defines the university’s social and academic life prior to its use as a movie set. For instance, the corridors feature giant banners with pictures of students and the motto: “Live, Learn, Leave.” Bulletin boards contain ads for the Smirkin’ Merkin party venue and a production of Inkblot Death Machine, plus quotations such as: “Positive thinking has never saved anyone from being eaten by a shark.” Imaginative modern sculptures inhabit the various courtyards. Most have seemingly convoluted titles, but on further reflection appear to be satirically linked to scientific theories or sci-fi films. There are even memes related to adventure gaming, such as the three crowbars sealed in a plinth entitled “Hope Springs Eternal,” to which Tom comments, “I can’t really explain it, but looking at this sculpture makes me really, really sad.”

Ashgate University is often eerily quiet. Still, you will hear footsteps echoing, birds chirping, water dripping, gears churning, and the occasional explosion. Once in a while you will hear voices from the film crew, or even see one of them running across a distant mezzanine. Often what they say or scream is alarming, but it’s unclear whether this is real or perhaps part of a well-rehearsed script. Voice-overs are excellent, particularly that of the protagonist, who nails the conflicting emotions this experience generates: confidence in his own expertise, impatience with snooty academic culture, suspicion, wounded pride, and dread. 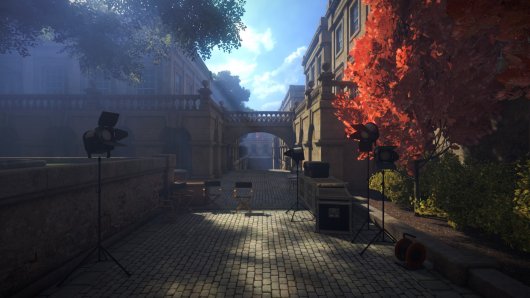 Musical accompaniment is stark and hushed. Fluttering piano melodies, drawn-out synth tones, and the deep hum of a men’s choir add to the atmosphere. Animations are also subtle, as birds fly far overhead, leaves sway in the breeze, and a lonely butterfly drifts by. Something that distinguishes Old Gods Rising from other games I’ve played are the detailed reflections in the windows. It’s worth strolling by the many rows of glass in the colonnades while peering at the mirrored images as they ripple across your slightline.

As beautiful as it all is, I found plenty that was disturbing and perplexing in my travels. Among Ashgate’s quirks, signs of a Lovecraftian influence abound, along with nods to entities from other age-old civilizations. The level of horror mostly treads closer to the creepy than to the grotesque. Strange icons appear from time to time, daubed on buildings or carved into metal circles. Blobs of black trail about – are they paint or are they slime? A black-and-white advertisement near the front gate shows two young men modeling suits with the motto “LA VIS EN GRIS,” backed by what looks suspiciously like a large, lacy tentacle. Though it could just be a shadow. Maybe…

The deeper you work your way in, the weirder and less playful the experience becomes. Symbols glow with a blue light. Floors move and doors slam shut. Giant red eyes blink from behind an iron gate. Fog and mist descend, putrid odors multiply, suspense deepens and reality blurs as consciousness slips away. Has Tom stumbled into a freaky horror show already in production? Or is it just possible that there’s really something supernatural going on? 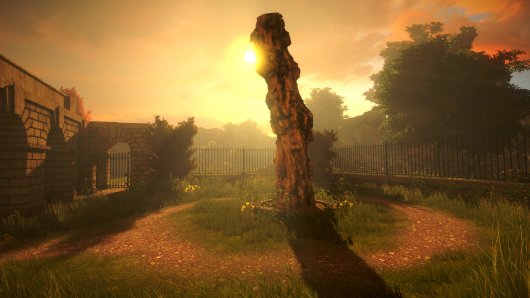 Old Gods Rising focuses on exploration and plot and doesn’t contain mind-bending puzzles. In this case there’s enough mystery to uncover that I was often chomping at the bit to find out what would happen next, so throwing in lots of progress-stalling conundrums would have been frustrating. The Horologium – a structure with six courtyards – comes closest to a multi-stepped puzzle. Each includes a monumental stone with carved symbols and/or runes that Tom interprets for you, and solving the puzzle by moving dials to the correct positions allows you access to the central building. The number six is frequently encountered in this game: six paved lots, six shield icons on markers, six lipstick sculptures. I expected to find the 666 designation of the Beast scribbled somewhere, but perhaps that’s too old-fashioned a reference. In an alarming fit of consistency, it took me six hours to finish the game. (I’m pretty sure the latter is just a coincidence.)

You are nearly always given a goal to achieve (usually by Maz) so that you have a good idea of where you should be heading. You can follow the objectives precisely, and that’s all that’s necessary to reach the endgame. But as your discoveries make you more independent, you can temporarily ignore his advice. You’ll glean more background context if you go off the beaten path and probe the grounds on your own before completing a goal. You navigate with the WASD keys using the shift key to run, and the mouse is used to pan the camera. A small, ever-present cursor aids with interactions, with an eye icon indicating objects to be examined more closely. There isn’t a traditional inventory but you do occasionally carry items around, each showing up automatically at the proper time in Tom’s hand.

Postings on bulletin boards sometimes contain telephone numbers, and if you approach close enough you can click to acquire them. At the next phone booth you can call them to ask questions about the college or listen to voicemails from student groups. My favorite recording was that of the Microelectronics Club, whose robot-like members seem uniquely sane. During conversations, including with Maz via walkie-talkie, you are sometimes given the choice between two different responses, though from what I could tell, these decisions do not affect the progress of the plot. 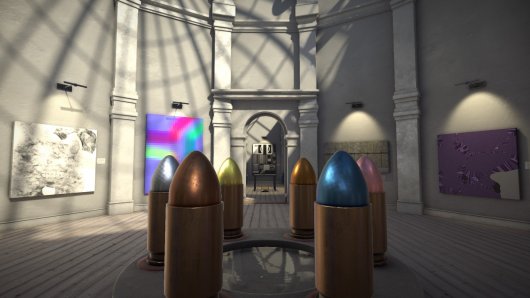 This game uses autosave-only. Manual saves or even multiple autosave slots would have allowed players the freedom to investigate without the risk of being locked into an area, heading toward an ending with no recourse except to start over from the beginning. For a gameworld this large, where it’s easy to miss considerable segments if you trigger a lockdown, autosave-only is a bad idea.

Indeed, the plot twists and trickery toward the end of Old Gods Rising took me entirely by surprise. As I sat watching the credits, mouth agape, I resolved to play the game again. I knew I had taken a path late in the game that I probably shouldn’t have (Tom said: “This is a mistake” just before I chose to hop down off of a tall platform that I suspected I wouldn’t be able to climb back onto). Fortunately, rather than feeling repetitive, my second playthrough was even more rewarding than the first – partly because I noticed small hints in the conversations this time that set the stage for the finale, but also because I discovered optional areas that I’d completely overlooked earlier, allowing me to take in even more beauty and intrigue. 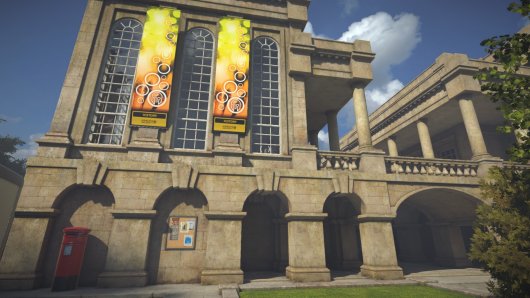 Even then I wasn’t able to see everything the game had to offer. There were two places I meant to visit prior to heading down the final path that had been a “mistake.” On the second playthrough, I held them off until the very end – one because it was all the way back across the university, and the other because, when I initially tried to go there, Tom warned me it was a bad idea. So I was concerned that it might lead to an even quicker Game Over. However, when I finally tried to go back to see these areas, it turned out a gate had been locked that effectively imprisoned me, which was very disappointing.

Though it cries out for more flexibility in recording your own progress, Old Gods Rising is an impressive trek through an enormous university used as a movie set, filled with magnificent courtyards, wrought iron fretwork, misty stone passages, and hidden cells with ancient symbols. You will encounter many surprises where reality seems to be taking a holiday, for reasons you may never be sure you entirely understand. A savory sense of the absurd is laced through the earlier part of the game, but when you confront tableaux of Lovecraft-inspired horror later on, they feel incredibly genuine. Don’t expect much in the way of puzzle challenge, but superb voice-overs, well-clued interactions, and secrets that ooze out in frequent, tantalizing drips combine to create a marvelous exploratory experience.

Old Gods Rising provides a spirited boost to those who prize spectacular scenery, a gripping mystery, and slow-burn horror without mind-bending puzzles to stall the journey.

What our readers think of Old Gods Rising