Where the Bees Make Honey review

Children are often told they can grow up to be anything or do anything. Somewhere along the line in become adults, many people find themselves falling into dead-end jobs to pay the bills and never realizing their full potential. The young protagonist in Brian Wilson’s Where the Bees Make Honey is one such person. Sunny is a frustrated telemarketer who yearns for the lost days of her carefree youth when she could do what she wanted. Her short tale of existential angst is relayed in a voice-over monolog as she recalls her early years through a series of playable vignettes, but while the message is conveyed well enough, the accompanying brief gameplay sequences are paradoxically both extremely varied and lacking in much to actually do.

To say Where the Bees Make Honey is an adventure game is a bit misleading. In truth, it’s a game that never settles on being one thing as it moves from one genre to another with each scenario. Starting in the present, Sunny’s cubicle-ville office is presented as a typical first-person 3D adventure. This transitions into a side-scrolling segment starring a caricature of young Sunny with a large head and eyes. From there it switches to an overhead third-person explorer with the same young Sunny. Still more game types make rapid appearances as well, including an over-the-shoulder 3D platformer with Sunny’s mother presented as a faceted polygon rabbit; a driving game where Sunny imagines herself as an RC monster truck toy bouncing down a hillside; and what can best be described as a Pac-Man game (without the pellets) of dodging zombies across a series of narrow bridges during Halloween. I definitely found the latter easier with the keyboard than a game controller, which matters because the result of being caught or falling off a bridge requires a restart of the sequence.

All of these different scenarios feature Sunny talking over top of what’s happening on-screen. In some instances she’s reflecting on the current memory being played, such as when she recalls her bike while her younger self walks around giant pieces of it. In other cases she muses about her life in general, like how people don’t see the real her when she’s in monster truck form. 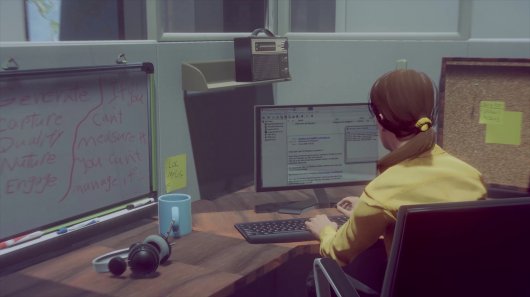 With its constant shifting of gameplay types and the accompanying voice-over narration, Where the Bees Make Honey bears some similarity to What Remains of Edith Finch but without the same powerful narrative focus as Giant Sparrow’s modern classic. Flitting from one memory to another, during most sections the gameplay exists just to occupy your hands until Sunny’s thoughts for that particular level have been revealed. No further goals are presented other than to move from the start of a level to its end. Only by successfully progressing through each scene will the story leap ahead to the next new change in direction.

The most substantial gameplay comes between the narrated portions when it ventures into yet another genre, that of a puzzle game. Miniature 3D worlds are presented in an isometric view, which can be rotated clockwise and counterclockwise in ninety degree increments with the press of a button. Young Sunny is depicted wearing her bee costume, the goal here being to collect a handful of honeycombs floating in various spots. By turning the world, paths must be found to gather all of the different honeycombs. Typically when a rotation occurs, several parts of the world also change, such as a wall in one orientation of the scene becoming a floor in another.

Voice actress Alex Wisner does an excellent job with Sunny’s present day narration, nicely conveying the protagonist’s frustration with her current life and her desire for simpler times in a heartfelt way without ever sounding whiny about it. No other characters – not even young Sunny – speak at any point except for Sunny’s mother during a child-lost-in-a-supermarket incident. The audio in general is quite pleasant, with instrumental tunes for the different game types and even a kinda-fun, kinda-creepy song with lyrics playing in the background of the Halloween section. Sound effects run the gamut from realistic in Sunny’s office to almost Mario-esque coin tings when collecting honeycombs in the puzzle scenes. 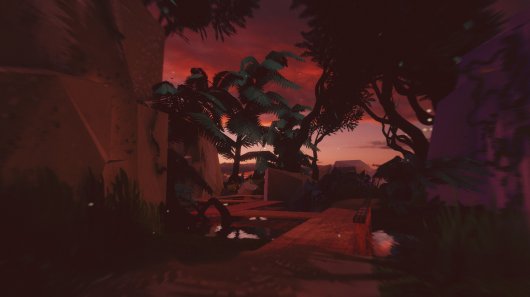 Visually the game is as diverse as its play styles, ranging from realistic to cartoony. I particularly got a kick out of the side-scrolling segment where a miniscule Sunny is wandering through a comparatively gigantic kitchen, passing large fruit, cups and plates, and using a shoe on a string as an elevator. Throughout the game a subtle but weird distortion blurs anything outside the very centre of view, which I found a bit distracting, but otherwise the look is clean and endearing, regardless of the design style.

The clear winner in the gameplay department is the honeycomb puzzle sections. They are really entertaining and pose an actual objective to pursue. The challenge of these sequences slowly increases throughout the game, though since there are only half a dozen of them overall, they never get to the point where a lot of thought has to go into solving them. I’d love to see a game comprised of just these kinds of puzzles and with even more complexity introduced than what’s on offer here.

Outside of the honeycomb sequences, the rest of the levels are rather vapid and pointless, simply requiring you to move your avatar from the start of the level to the end in order to hear Sunny’s monolog. Although there’s a lot of variety, this works against the game as the play time is so short. At not even an hour long, transitioning through half a dozen completely different play styles feels like the game is having an identity crisis. It’s almost as if the developer had a number of small game jam experiments lying around and devised a narrative structure that would allow them to be smushed together. 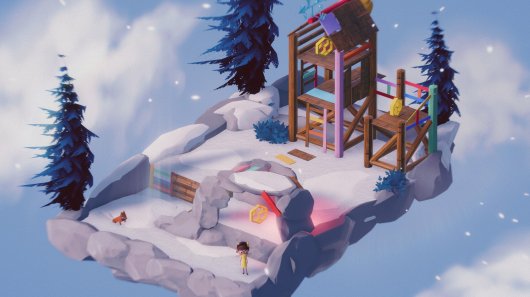 The message also seems to be lost in this ever-changing stroll down Sunny’s memory lane, as it never returns to the present until the very end. While the overall notion that the protagonist’s life was better as a child is plain enough, there’s nothing that adds any insight to her present-day disillusionment. Nothing special seems to be happening to dredge up these memories, and nor does she benefit at all from the recollections other than a momentary wave of nostalgia. Her flashbacks provide remembrances of a random winter, summer, Halloween, and the supermarket abandonment incident with no real larger context. While there’s a certain childlike whimsy to all of them, the lack of any current-day catalyst that would give them meaning makes for a few seemingly random leaps from one incident to another. Combined with the constantly shifting, radically different play styles, I had a more difficult time getting into the story than I should have.

Where the Bees Make Honey tells a rather emotional story of a frustrated young woman, but ultimately Sunny’s memories feel more like an excuse to string together a series of disparate gameplay styles. With so many different genres presented in such a short period of time, the game never quite becomes comfortable to play, as just as you’re settling into one, you’re suddenly thrust into the next. And since there are no particular triggers for the memories the protagonist chooses to reminisce about, the narrative jolts awkwardly from one sequence to the next in a couple of places. For all its disjointedness, however, the honeycomb puzzles are a lot of fun and make for a good little time waster when you have a few minutes to spare (the game has a single autosave at the start of each sequence). There’s certainly potential to expand on the ideas explored here, so hopefully the developer allows them more time to breathe in his next endeavor.

Where the Bees Make Honey throws half a dozen different gameplay types at the wall, but with such an abbreviated play time very few of them are able to stick.

What our readers think of Where the Bees Make Honey