You are a noble knight, tasked to find three great treasures. The king’s time as monarch of this medieval, fairy tale-inspired realm is coming to an end and he has chosen you as his successor. The catch is that you are first required to find these lost treasures in order to claim the throne.

If it does, you’re probably a fan of the golden era of adventures and recognise the basic premise of King’s Quest. You would be wrong in thinking that’s the subject of this review, though, because I’m talking about The Idiot’s Tale from indie studio Megalithic Mainframe, a two-person studio comprising brothers Elliott and Anton Ridgway. While taking its cues from Sierra On-Line’s iconic series – including one ill-advised element that modern players probably hoped they’d put behind them – instead of being a similarly serious fantasy adventure, this enjoyable little game is a lighthearted comedic romp with a healthy dose of parody thrown in. 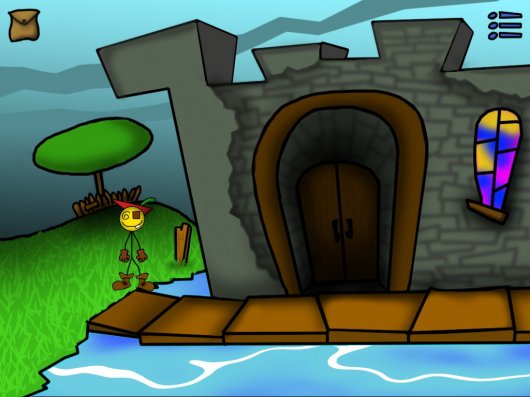 There are generally two ways in which a successful parody works. Either it sticks to the formula of the original and makes a lot of jokes along the way, or it carves out its own path while riffing on the source material. The Idiot’s Tale takes the second route, and the result is a consistently humorous and well written story that pokes loving fun at its obvious inspiration along the way.

The hero (or idiot) of this tale is Sir Jimothy Quest, who is summoned by King Farkinian of the Kingdom of Dodotry and charged with locating and retrieving the three lost treasures. Even finding out what exactly these missing treasures are is a challenge in itself, representing the first quest of the game.

The script is extremely funny throughout, particularly from Sir Jimothy, who always has a pithy or sarcastic comment to make, like when he regularly calls his companion owl Hoover a flying feather duster. Hoover is supposedly there to help Sir Jimothy in his grand quest, but in a blatant nod to Cedric (King Graham’s owl in King’s Quest V), Hoover is completely useless. Instead, he ends up being the biggest source of humour in the game. 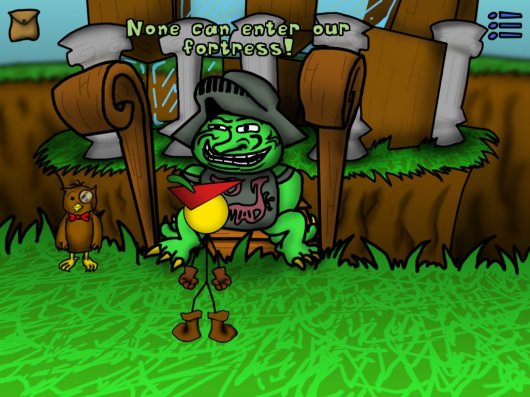 One of the ways that The Idiot’s Tale runs counter to the established King’s Quest formula is that rather than accepting the owl’s guidance, regardless of how unhelpful he truly is, Sir Jimothy points Hoover’s failings out to him at every possible occasion and even tries to get rid of his feathered companion when he has the chance. At one point, Hoover is perched on a wooden plank at the base of a hill while Sir Jimothy is at the top attempting to roll a large boulder onto the unsuspecting bird. The whole joke is set up and executed so well that it gave me a good laugh.

The only objection I have with the dialog is that it isn’t voiced, which would have added a welcome extra dimension to the eclectic cast of people you meet. The characters here tend to be standard fantasy and fairy tale tropes such as a troll guarding a bridge, the old witch in the gingerbread house, and the stereotypical blacksmith. Others, though, such as a clerk working in the fast food restaurant “macnolas” and the man dressed in the hotdog costume at the amusement park, subvert the genre by being completely out of place. This helps keep you guessing where the game is going next. When you expect one thing, it generally does another.

You move Sir Jimothy around using the left mouse button. Hovering the cursor over the edges of the current screen shows whether he can move in that direction. The protagonist is able to interact with his surroundings and other people through the verb coin that appears when right-clicking hotspots, bringing up look, interact and talk options. Inventory is accessed through a small pouch icon located in the top left of the screen, and selecting an item changes your cursor to that object and allows you to try using it in the environment. 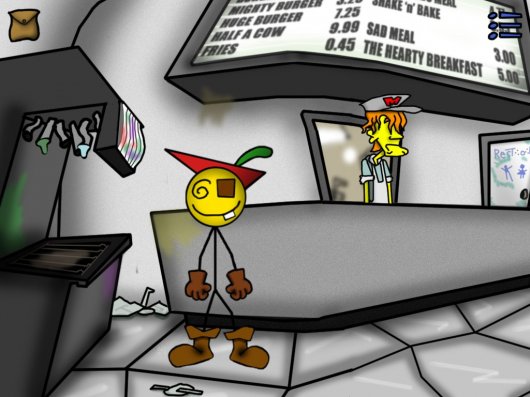 Saving and restoring is accomplished by accessing the menu via the icon at the top right. Saves are manual in The Idiot’s Tale, another throwback to golden era adventure games. Quitting can be problematic if you’ve forgotten to save recently (which happened to me), as there is no autosave feature available and the game doesn’t prompt you to record your progress first.

Most of the puzzles are a fairly simple matter of finding the necessary items to progress the story further. Some objects are easy to obtain simply by picking them up, while others require a series of steps to be accomplished first. None of the solutions seem illogical or out of place within the game world, although it’s a strange game world so you do have to acknowledge the innate silliness of it. At one stage Sir Jimothy just needs to loosen something and a surprisingly complex sequence of tasks is required to untighten it 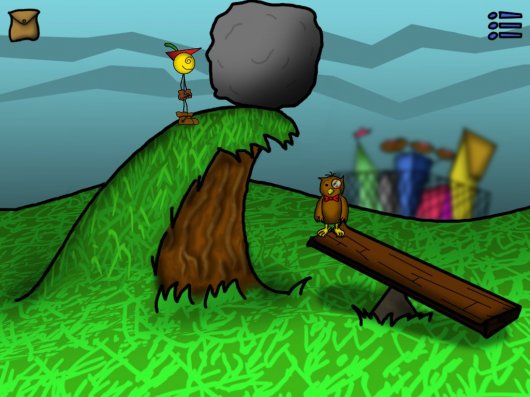 As well as the normal inventory fare, there is a brief physics-based challenge where you must fire a slingshot at a distant group of targets, controlling angle and distance while directing the attack, after which your performance is humorously ranked. There is also one instance towards the end of the game that could loosely be described as a Quick Time Event, in which you’ll have to perform certain actions quickly enough to escape Sir Jimothy’s pursuer. Again, this feels natural and it does give a sense of urgency as failure to perform the actions correctly or in time results in Sir Jimothy losing his head.

A nice feature is the in-built hint system accessed through the main menu. This works by giving you a vague clue at first and progressively making them clearer as you keep clicking. What is particularly great about this system is how in sync it is with where you are in the storyline; the clues all match up nicely with the current situation and I never encountered a problem where there wasn’t any help available to help me. There’s even some more comedy to be found in clicking through the hints!

Unfortunately, there is one potentially major negative that is very inconsistent with modern adventure game design. On at least one occasion you can reach a “walking dead” point, in which you can’t progress because of an action you took earlier without being aware of it. (Small spoiler ahead, but consider it a friendly public service announcement.) Early on you find an air conditioner on the roof of a building and are able to tip the unit over the edge. The problem is that to complete your objective you need to have arranged for something to be underneath it when it falls, and if you’ve already dropped it without doing so, there doesn’t appear to be another way to continue the story. It’s possible I missed an alternate solution, but it was frustrating to have to rely on a saved game to go back to an earlier point without even being alerted that I needed to do so. (Edit: According to the developer, there is in fact a way to reset the conditions for this puzzle without reloading the game, which is actually very simple but not at all intuitive. There's an inherent illogic to the way it simply resets which threw me in an otherwise logical – at least within the game world – puzzle design.) 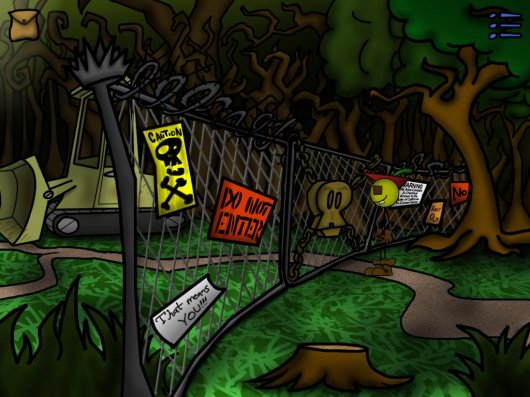 It’s hard to stay mad at the game, though, thanks to its amusing visuals. The Idiot’s Tale is presented in a bright cartoony colour palette that is very appealing, and the characters are all graphically unique and well designed. Sir Jimothy is probably best described as a stick figure with boots and gloves and a large emoticon-looking head with only a single tooth. Besides being funny to look at, the protagonist is also nicely animated, such as the big Looney Tunes-style eyes popping out of his head in astonishment when he loses an important document, then dashing across the room in a vain attempt to stop it from being sucked into an air vent. There are some close-up scenes for variety and these too are used in a comedic way, such as when you’re talking to the king and the camera zooms in way too close to his face.

The whole art style puts me in mind of early-millennium Flash games, although it is obvious that the artists have taken great care to produce a smooth and charming experience. The game boasts over 80 hand-drawn backgrounds, which is an impressive feat in itself, and each one is detailed to a pleasingly high standard. Better yet is the wide range of varied locations you’ll visit. Sure, there’s your forests and medieval castle to explore, but then there are a number of stalls and attractions like the Hall of Mirrors, Hot Dog Land, and magic and exotic food stands in the amusement park. You’ll also encounter Rumpelstiltskin (conveniently located under a sign with his name in massive letters), a library full of computers with the obligatory tech nerd, and an old-fashioned outhouse.

In the absence of voice acting, the music is another major highlight. The soundtrack, like the game itself, is eclectic in its mix of tracks, bouncing easily between smooth jazz and minstrel-like flutes and harps. And electric guitars. And ‘80s rock keyboards. As I said, it’s eclectic. And yet there is also a consistency that makes each style feel like it belongs in context. Every location has its own theme, from the upbeat swing outside the castle, to the slightly spooky atmosphere of the castle interior, to the pop-like tune in the fast food dive. The amusement park is a particular standout, expertly replicating the sound of fairs and carnivals that I remember from my childhood.

The Idiot’s Tale is just a fun game to play, with a sarcastic, irreverent humour that permeates everything and lovingly throws shade at classic adventure titles. There are a couple of potentially serious negatives, but these are completely overshadowed by the enjoyable overall experience.

GAME INFO The Idiot’s Tale is an adventure game by Megalithic Mainframe released in 2018 for Android, iPad, iPhone and PC. It has a Stylized art style, presented in 2D or 2.5D and is played in a Third-Person perspective.

What our readers think of The Idiot’s Tale