continue reading below
»   Home  /  Articles  / Reviews  / Beyond the Sky review

Beyond the Sky review

Once upon a time, in a land far, far away, indie developer Iperurania Arts created the charming point-and-click fairy tale adventure Beyond the Sky. In this game they placed a young maiden, Selene, in the safety of a castle tower. But Selene wanted to see the world, even travel to the moon. So she left the tower and started out on one of the most challenging, delightful fantasy tales I’ve had the fortune to play in recent years.

As is often the case in fairy tales, this one features a big, bad wolf. The story opens with the wolf guiding the naïve Selene into his dark woods. There he steals her adularia, a mystical talisman she planned to use to reach the moon, and abandons the young woman in the forest. From here on out Selene must fend for herself and learn about life, death, and overcoming her fears so that she can eventually confront the wolf again and reclaim her stolen amulet. The journey will ultimately see her visit a kindly wizard in his tree house, a seashore presided over by Death, and a foreboding ogre’s cave, among other fantastical locales.

Beyond the Sky’s settings and characters are all rendered in a sort of cutout paper doll fashion. Scenes are built up of multiple layers, allowing for parallax scrolling as Selene moves across them, giving a greater sense of dimensionality to the areas she traverses. The whole visual look is that of an illustrated storybook come to life, nicely matching the narrative content that teaches Selene about acceptance, tolerance, and bravery needed to escape the dark forest and everything it contains. 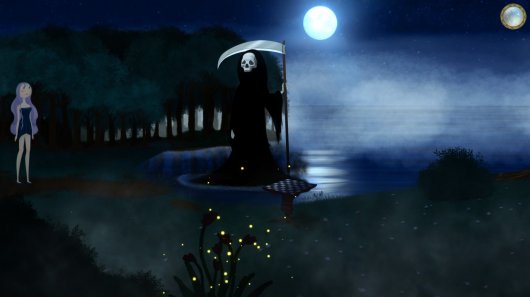 Selene is controlled in typical point-and-click fashion, with a verb coin appearing with different actions to select upon clicking points of interest. In the beginning, Selene only has one general action available. However, through her travels she will learn important lessons that unlock additional abilities, such as being able to look beyond surface impressions, listen, touch/pick up, and to speak and sing. Each of these is added as an additional option to the verb coin, meaning that some puzzles Selene encounters early on can’t be tackled until she has learned the necessary skill elsewhere. I really enjoyed how the accumulation and development of these talents were interwoven into Selene’s journey of self-discovery over the course of the game.

The story itself is presented in a rather unique way from most adventures. Instead of having voice-overs or even simple lines of text appearing above characters’ heads when they speak, text boxes appear in the corners of the screen containing prose such as you would find in an actual fairy tale. It might include descriptions of the places and people Selene meets, the words she says, or, most interestingly, her inner thoughts and feelings along the way. It was the latter that particularly stood out to me and helped me connect to her character better than most games that employ reams of dialog lines trying to achieve the same thing. Oftentimes these text descriptions are accompanied by various still shots to illustrate the events transpiring. While Beyond the Sky has very little animation other than simple walk cycles, its storybook nature makes it a game where a lot of animation would feel strangely out of place.

The audio also complements the overall fairy tale esthetic. Although there are no voices, a good number of sound effects feel mostly at home here. I did find that sometimes the ambient soundscape could get a bit overwhelming, such as the rustling of the dark forest, which seemed more like someone enthusiastically crumpling up plastic garbage bags. But it’s a minor niggle, especially as the occasional orchestral scores all have a fittingly dreamy quality that counters any obtrusiveness of the background noises. 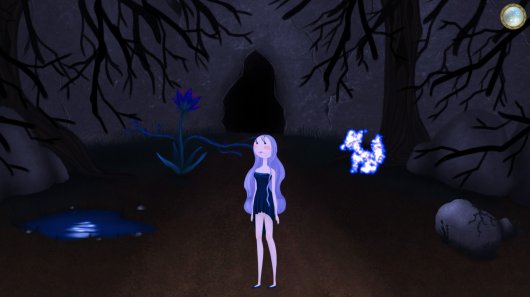 Beyond the Sky features a variety of different challenges, but its main focus is on logic statements. For example, at one point Selene encounters the human personification of a chessboard knight who is trying to remember the last battle he was in. He provides Selene with a bevy of statements along the lines of “nobody was farther south than one of the rooks,” or “the blue king and queen were both adjacent to another piece,” or “there was no one else in the red king’s column.” Using the many statements provided, you will need to sort out where all the pieces on the chessboard need to be placed. And believe, me there are many, many statements to work through.

These types of puzzles can be tricky. When I’ve encountered them in other games, they’ve always been all-or-nothing scenarios. You either reconcile all of the statements and get everything right, or if you miss even one tiny little thing, your whole solution is considered wrong. That is not strictly the case here. In the situation with the knight, for instance, at any time you can ask him if he thinks you’re on the right track. Green outlines are then placed around any pieces that you have correctly positioned on the board. I found this extremely helpful, as many of these logic puzzles get really in-depth. In the case of a couple tasks involving first identifying alchemical ingredients and then combining them to create a specific potion, I managed to get myself close enough to the correct answer and then just brute forced my way through the last few options.

Not only are these puzzles all quite well done, they’re also nicely integrated into the circumstances confronting Selene, surprisingly so given their somewhat abstract nature. However, when one is encountered there tends not to be anything else to do in the game world until the current obstacle is overcome. Given the complexity of these challenges, I found myself having to take breaks from the game after completing them. While finishing such a scenario did provide a little more story detail, it didn’t feel like quite a big enough reward to propel me onto the next leg of the journey right away. I never felt any of these puzzles were unfair, just a little mentally draining and so I needed to time to recharge before tackling the next one. 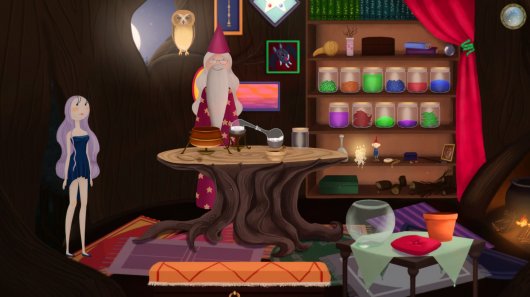 With so many logic statements to keep track of, you may be worried about needing reams of paper to take notes on. While you can certainly do so if you wish, Beyond the Sky includes an in-game journal that automatically records almost all of the critical information you need to complete the puzzles. The journal is presented as a list of items that, when clicked, will display a little scroll-shaped window with the related details.

In some cases you may need to cross-reference information from different sources, and here the journal helps as well, as you can have multiple items open at once and can drag them around the screen to give you a better view of everything you need. When you have the journal open, though, you can’t interact with the environment, so you may still find yourself jotting down your own notes just so you can have them beside the puzzle at the same time.

It should also be noted there is one puzzle involving a man, woman, child, and an elder singing songs for which the journal does not record the people’s names, and which I could not get them to say again after speaking to each the first time. It was only by the time I reached the last of them that I understood the names were important. This lead to a certain amount of trial and error in solving the particular logic challenge associated with their songs that would not have been present if I’d written down the names in the first place – or, preferably, if that information had been recorded in the journal. 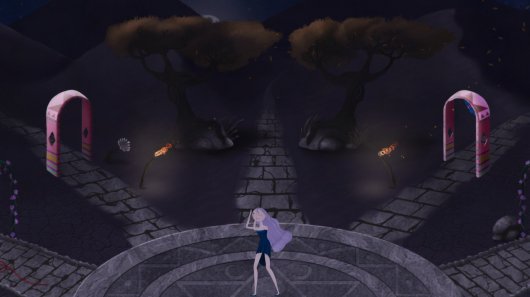 Aside from the logic statements, Beyond the Sky features a smattering of other puzzle types. These range from simple symbol matching, to helping navigate a short labyrinth section, to a few minor inventory combination puzzles. While the game doesn’t have an inventory in the traditional sense, once Selene learns the skill of “touch” she can pick up a few items during her quest. When she reaches a place where a particular object is needed, it is presented on the verb coin as another option, so there is never any doubt where something needs to be used.

Total play time weighed in at just under five hours for me, not including the breaks I took after completing the tougher brainteasers. The length felt right for the story being told, and it was enjoyable seeing Selene grow more confident in herself through this journey. Along the way, in addition to acquiring new skills, she also has the opportunity to ask the various people she meets about philosophical issues such as the nature of life and death. The answers she receives aren’t groundbreaking, but are quite appropriate in context.

Simply put, Beyond the Sky is a beautiful fairy tale game. Writing, sounds, and visuals are all focused on providing a fantastical experience that details the story of a young woman becoming more mature and confident in herself in a fun and charming way. While the logic-based puzzles can be exhausting at times, the ability to ask if you’re on the right track and see how much you have correct helps mitigate any game-stopping situations. If you’re a fan of imaginative tales and legends well-told, then you owe it to yourself to accompany Selene on her journey.

With its brain-bending puzzles, delightful story, and all around impressive fairy-tale-ness, Beyond the Sky is a point-and-click adventure not to be missed.

GAME INFO Beyond the Sky is an adventure game by Iperurania Arts released in 2018 for Mac and PC. It has a Stylized art style, presented in 2D or 2.5D and is played in a Third-Person perspective.

What our readers think of Beyond the Sky