We get a small commission from any books sold.
All Bitmap Books
Written by
Steven Watson — July 18, 2016

Someone is handed a gem that promises eternal life, and you just know it won't end well. Indulging in the occult never does. Christopher Brendel’s Lifestream remake tells the story of a devout priest who is seduced by such a promise – the 'lifestream'. But while the lifestream inevitably fails to live up to its promises, the game mostly succeeds despite a few notable flaws. With a compelling story and solid puzzles, this new iteration will easily hold your attention, even if it shows signs of inexperienced craftsmanship at times.

The current version of Lifestream is a text-based remake of a 2004 graphic adventure, but it’s not Interactive Fiction in the traditional sense. Instead of a parser, the game is choice-based, providing a list of actions – ‘look at the newspaper’, ‘play the piano', ‘open the drawer’ – which seldom number more than four, as well as a compass wheel to navigate your surroundings. The room you’re in is given a terse written description with an accompanying picture in the top left. When a character is speaking, there is also a portrait displayed, often prettier than the room pictures.

For a modern remake, the interface surprisingly looks dated. Expect a plain grey and red colour scheme, and a massive sidebar that takes up a quarter of the screen. Appearances aside, it's very functional, and has a sort of early-2000s aesthetic which isn't without its charm. Through the sidebar icons you can access various screens: a map, journal, objective summary, character overview, and settings. The big button interface is particularly suited, it must be said, to the touchscreen version, though overall the desktop and tablet versions offer an essentially identical experience. 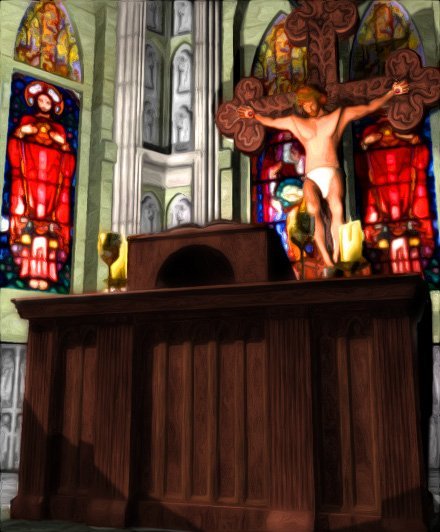 The story is a supernatural mystery that tells of a man, John Holton, searching for his missing father, Randolph. The thing is, Randolph is a Catholic priest, so John’s identity as his son has to remain a secret. What’s more, you quickly discover that Father Randolph became fascinated by something called the lifestream, a place of immortality less wondrous than it initially seems. The game consists of you exploring Randolph’s house in search of his journal entries and ultimately, his fate. But every time you discover a set of journal entries, you play a chapter as Randolph himself, reliving those events from his journal instead of just reading them.

Father Randolph is the more interesting character, a good priest struggling with the temptations of pleasure that ultimately lead to ruin. His son is more of a blank state, defined only by his loyalty to his father. All other characters are similarly thin, owing in part to the unremarkable prose. At times the writing is even improperly implemented. Upon examining a ball, John says ‘you are certain that any child would have a ball—no pun intended—bouncing it across the floor’. Such lines reveal the voice of the author rather than the character. Other times, the characters are simply poorly thought through. Why, for instance, would an otherwise genial priest be content to fib to a fellow priest so as to steal some garden shears, and why is he equally happy to manipulate the fact that someone’s sister is in hospital to advance his own interests? It can’t even be chalked up to his increased desperation, as he is willing to do these things before he has even discovered, and thus been corrupted by, the lifestream itself.

Thankfully the story is redeemed by its plot and lore. The supernatural religious themes establish a mood not unlike the Gabriel Knight series, and may well appeal to fans of those games. The mystery of the lifestream, an ancient myth of eternal life originating in a fictional area of Jerusalem named Singhaa, fascinated me in the same way that Voodoo lore did in Sins of the Fathers. There is a small problem of pacing, in that the story is slow to unfold, with no explicit mention of the lifestream until nearly halfway through its 8-10 hour play time. But earlier portions of the game are still fun and intriguing, especially as you're able to make quite a few choices that affect, to varying degrees, the way in which the tale will play out. Do you hide your identity or introduce yourself truthfully as Randolph's son? Do you pocket the money you find in church or do you return it? And it’s certainly worth getting to the second half where everything is explained, culminating in a grand, ingenious ending that few will see coming yet magnificently explains everything that has come before. 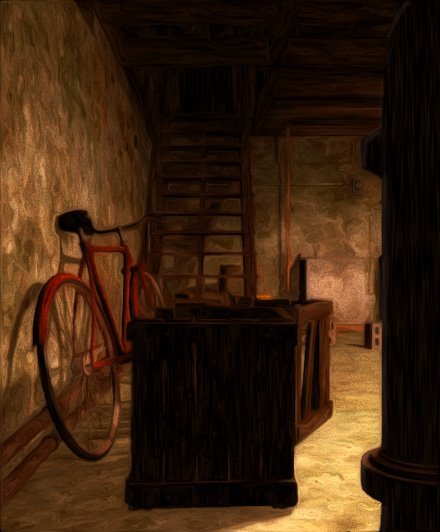 Although the finale is cleverly executed, there are times leading up to that point when the story is less effective. One such instance relates to the soundtrack. Whenever Father Grandl, a fellow priest of Randolph's, comes on the screen, expect almost-comically morose music right from the get-go, far before you have any reason whatsoever to suspect ill of him. What could have been a nice twist in its own right – the revelation of a sinister character – instead becomes instantly predictable and heavy-handed. The rest of the soundtrack is fine but is not especially memorable, sounding much like out-takes from Gabriel Knight. There are no voice-overs, but the audio extends to some basic sound effects, from doors opening to ominous whispers.

A better aspect of the game is its many well-placed, intelligible puzzles. Quite of few of them have been updated and improved vastly since the original 2004 game. At the beginning, you’re able to choose to choose a difficulty setting: easy or normal. Easy provides you with in-character suggestions, like ‘maybe it would help if the chisel was hot’, and a ‘receive the hint’ choice that appears on certain puzzles. Only the most hapless puzzle-solver will need the easy difficulty, though. Indeed, playing on normal difficulty I was seldom stuck, and the semi-choose-your-own-adventure format makes the gameplay helpfully streamlined. When all possible actions are laid out in front of you, missing that one object or important detail is highly unlikely.

There are no dead ends or deaths except at the very end, and those scenarios are easily repeated to get right. Neither will you have to take any notes except, perhaps, for one puzzle that requires you to remember someone's full name alongside their date of birth. That is one of the weaker puzzles, but most are quite clever. My favourite was a potion puzzle, in which you have to acquire various ingredients and work out the moon cycle in order to communicate with those stuck in the lifestream. When it worked and a woman communicated back to me, I was incredibly smug, as any well-crafted puzzle should make one feel upon solving. 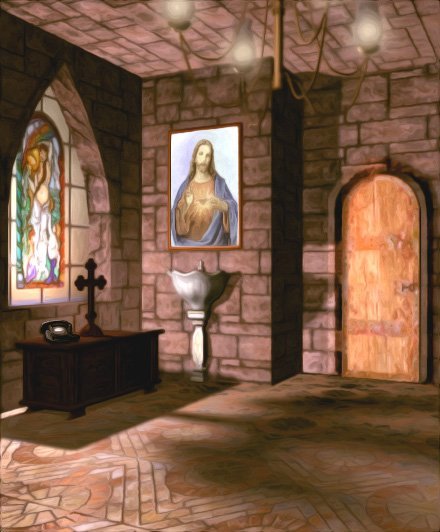 Most of the puzzles are inventory-related challenges like this. Although using a choice-based format, there is a separate inventory panel from which you can select items to use. You might think it possible to simply progress through the game by exhausting every choice, but in reality that would be incredibly difficult. There are probably hundreds of objects in the game, and a couple dozen inventory items. And puzzles are seldom as simple as matching inventory item x with game object y. The possible combinations are essentially as manifold as any other adventure, text or graphical. A testament to this is the fact that in moments of uncertainty, more than once I desperately and futilely tried to combine objects in hope of an unexpected solution. It never worked.

There are one or two puzzles that aren't inventory-based, the most controversial of which is a maze. Fortunately, it’s actually one of the easiest puzzles: you solve a riddle to find a drawing and follow its simple instructions. The game doesn’t want you to get stuck; rather, it keeps going at a reasonably swift pace so as to focus on the plot. Although the game doesn't shy away from puzzles as its choice-based format might initially suggest, it could be fairly said that it is more for adventurers in search of an interesting story than puzzle enthusiasts. Nevertheless, the game has a series of in-game achievements, alongside a traditional scoring system, that provide plenty of additional challenge.

Available from the developer's website, the reimagined Lifestream is ultimately a good game with grand ambitions that it doesn’t entirely realise. It is a work of enthusiasm by someone who continues to refine his own 2004 creation – including a significant update to this remake in response to initial player feedback. As such, it’s a well-rounded adventure that will easily keep you entertained, if never really remarkable. Players will be rewarded with a fun and interesting experience, one that overcomes most of its flaws on the strength of its plot and its solid gameplay. But lacklustre prose and a lame soundtrack, alongside some poor design choices, make the game hard to universally recommend. If you're fond of supernatural mysteries or choice-based adventuring and think you can overlook the game's weaker areas, then you too may wish to be seduced by the lifestream.

Remade as a modern text adventure, Lifestream is a clever supernatural mystery that is not without its flaws but manages to be better than the sum of its parts.

GAME INFO Lifestream (Interactive Fiction remake) is an adventure game by Unimatrix Productions released in 2016 for Android, iPad, iPhone and PC. It has a Illustrated realism style, presented in Illustrated text and is played in a First-Person perspective.

What our readers think of Lifestream (Interactive Fiction remake)