If you’re a fan of old-school, retro-aesthetic adventures, your heart will surely be won over when you first play Crashable Studios’ Kickstarter-funded debut, Alum. It beats with the classic heart of a Golden Age 320x200 point-and-click, it excels at a balance of interesting and reasonably solvable puzzles, and appears in its early stages to meld science fiction and fantasy elements to the tune of great narrative success. And then, sadly, its storytelling falls all to pieces and strips away the game’s thin veneer to expose what is, ultimately, an incredibly ham-fisted and brutally heavy-handed allegory of the evangelical Christian faith.

It certainly starts out with promise. The first chapter (of seven) introduces Alum Descry, the title character, a denizen of the futuristic city of Kosmos in the Land of Tide. A mysterious protector by the name of Mr. Glym observes the city from his towers above, while his citizens are slowly crippled by a virus known only as The Vague—an illness that produces no visible side effects but overwhelms its hosts with sadness and loss of the will to exist. The opening scene introduces us to Alum and his wife Esther, who has become the latest victim of the disease and its symptomatic loss of hope. Alum is a delivery boy in Kosmos, and in the course of doing this job, he learns that a cure for The Vague might exist.

The whole setting of this first chapter is a really cool throwback to sci-fi games like Beneath a Steel Sky, which unfortunately there have never been nearly enough of in this genre. There are menacing robot guards, secret meetings with underground rebels, locked doors to open with inventory items (some genre conventions are timeless), and eventually the immediate need to flee Kosmos and seek out the Rogations, the resistance group that may hold the key to the virus. It’s out in the fringes of the Land of Tide that Alum chooses to drink from a mysterious potion called a Rushlight, which brings him into close contact with a mysterious benevolent deity known as the Unfeigned Altruist. 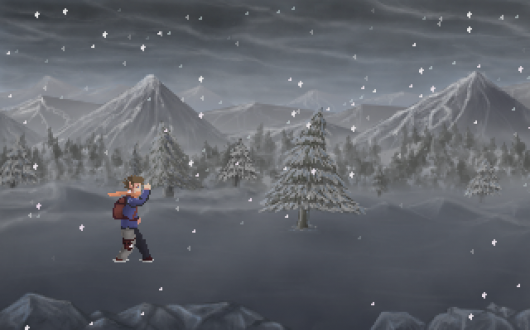 Sound like an interesting narrative? It sure is; it’s creating a new universe full of its own unique mythology. That is, until you apply the most obvious, un-subtle religious parallels to it. Let’s see, there’s a disease that a large group of people—including loved ones of those who don’t have the disease—are slowly succumbing to. This other group of people has found a cure, though, and it involves conversations with a deity that can’t be seen. And now it’s their mission to bring the cure to those with the disease and spread the love of the Unfeigned Altruist. Possible spoiler alert: it’s the story of sin, repentance, and salvation in the traditional Christian sense, and it couldn’t possibly be communicated less delicately. But more on that later, as there is much about this game to admire.

For better or worse, Alum is truly a throwback to Golden Age Sierra games. It looks absolutely fantastic in its 320x200 pixelated glory, with gorgeous colorful, expansive art reminiscent of the best of VGA days gone by. The outdoor locations feature beautiful use of colors and shading to create a very realistic looking backdrop of both light and dark sky, and snow-covered mountains in the distance. The graphics also successfully convey the designers’ sense of imagination, with impressive settings like the walkways of Slip Town, which tower over sets of similar walkways below and lend to a real sense of dimension. This creativity extends to the more fantastical characters like Gunther, the giant green swamp head with a grumpy disposition. The walking animations look professional as well, and the game has no graphical glitches of note—Alum is always appealing to look at. The interface is also a direct descendant of VGA-era Sierra, with Walk, Look, Action, and Inventory icons always available at the top of the screen.

In another important Golden Age nod, Alum also features plenty of deaths, including some brutal “fall off the edge” accident deaths that only the Two Guys from Andromeda could love, but there are no legitimate complaints because they almost always come as a result of being stupid or reckless, or both, and in any case there are constant checkpoint autosaves and prominent warnings that challenging sequences are forthcoming. Then, to really wear its early-1990s Sierra pride on its sleeve, there are multiple dumb arcade sequences. I say that very deliberately; everyone who’s assembled 30 hamburgers in Space Quest IV knows how incredibly stupid action in an adventure game can be, and the action sequences in Alum are pretty bad—but reasonably easy, and totally skippable after a couple attempts (and a little fun in an I-remember-how-bad-these-always-were nostalgia way). 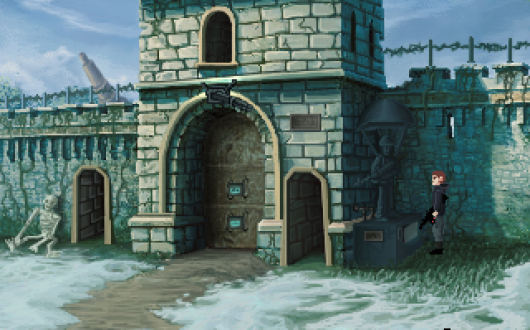 Alum is also a really impressive production for its gameplay substance and professionalism. I was worried when reviewing the game’s history, which included a failed Kickstarter, a second $10,000 crowdfunding effort that succeeded by the thinnest of margins, and then a 22-month development cycle that included fewer updates than backers probably appreciated and some poor late-stage miscommunication about the actual release date. It all sounded like a recipe for a game with plenty of rough edges, but nothing could be further from the truth—this is one of the most polished indie adventures I have played in recent memory. I encountered no bugs or graphical glitches to speak of; the music is sparse but organic and fits well with the mood of the setting (though the less said about the dreadful end credits song, the better); and the puzzles are really outstanding: a very traditional array of sequence conversations, inventory puzzles, and fetch quests, but never too easy or too difficult and never completely obstructive to the storytelling. Alum will take a good 8-9 hours to complete and very little of it feels like dead time.

The one exception to its impressive production quality is its mediocre-to-bad voice acting, which does a great disservice in a game where so much emphasis is put on the content of the conversations. Now, it’s hardly fair to expect the quality of a professional studio in a Kickstarter-funded amateur production, but the apparent decision to stack the cast with family members (not an exaggeration, as there are a whole lot of credits with the same Orsie surname as the two brothers who make up Crashable Studios) and their almost certainly unpaid close friends has predictable consequences. The main character, Alum, is among the better portrayals of believable dynamic emotion, though his occasionally lazy enunciation is unfortunate. Most other male supporting voices are generally unimpressive, while remarkably, nearly every female voice is a complete disaster, emphasizing the wrong words in sentences, barely bothering to appear concerned with their immediate situation (maybe not being aware of it; who’s to say what context an amateur voice actor is given during recording?), or over-acting in a horrendous B-movie type of way. The quasi-amateur productions of Wadjet Eye have gotten voice acting right for years, and it’s a reasonable expectation that Alum totally whiffs on.

Apart from this one stumble, all of the above would have made this a great adventure experience, but it can’t completely atone for the profoundly cheesy story. Though I profess Christianity as my personal faith, I am not particularly a fan of any game that features a blatant “mission” in its narrative rather than just telling an interesting story. Alum doesn’t just wade gently into the murky waters of religious messaging—it dives in with reckless abandon and a seeming total lack of self-awareness. Though the experience is paced very well during the playable portions, it features far too many cutscenes involving the Altruist and our heroes that search for myriad new ways to drive home the allegory through over-extended dialogues that would generously be described as silly. “Help me lay my heart in the cooling water of your love, Altruist” sounds more like dialogue from 1980s public access television than any sincere and believable expression of religious conversion. It’s likely that even the master of parables, Jesus Christ himself, would shake his head at the lack of subtlety. The game doesn’t even settle for just emphasizing the basic precepts of Christianity; it actually endeavors to take a position on somewhat controversial religious topics such as the age of accountability—so not only does the game want you to be endeared to the general idea of Christianity, but to the designers’ specific ideas about Christianity. 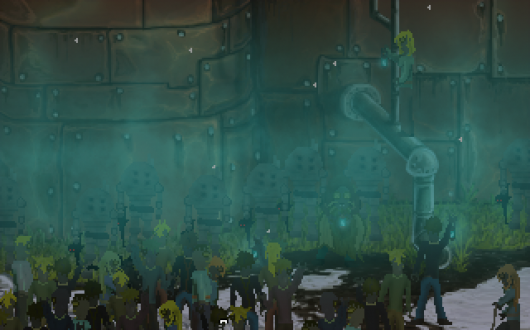 I may perhaps be in spoiler territory by saying this, but… there are no spoilers to give. The good is evident, as is the evil. Good and evil eventually fight. Evil doesn’t triumph. If you’re hoping for any kind of small twist, story branch, or real narrative development at any point after the first two chapters, you likely won’t be satisfied. The game marches ever onward toward its final confrontations, piling up the religious interactions with no trace of irony.

The one actual ironic note in all of this is that I had absolutely no hint of the game’s religious aspirations coming into this review. At the end of the game, after watching a really promising and interesting story deteriorate into a bland, by-the-numbers evangelical Christian tract with an insufferable ending, I was left wondering who this game is really supposed to appeal to. Its clumsy dialogue and poor voice acting will certainly not serve the message to the unconverted, but it holds no real edification or encouragement value to those who already practice the faith, and it just takes itself way too seriously to really be “fun”. I would never, ever fault a designer—especially a clearly talented team like the Orsie brothers—for using their chosen artistic platform to share their beliefs. But I sure can fault them for taking what was shaping up to be a great story with exceptional technical success and polish, and turning it into a dull and clichéd one. They’ve made me a believer in their considerable development skill, so here’s hoping they steer away from such heavy-handed religious inclinations next time around.

Alum is available at:

It’s a bummer that a game that looks as good, and is as well-designed and polished as Alum, misses the boat on story so badly.

GAME INFO Alum is an adventure game by Crashable Studios released in 2015 for Mac, PC and Linux. It has a Stylized art style, presented in 2D or 2.5D and is played in a Third-Person perspective.