In Drizzlepath, you travel in the footsteps of an unnamed hero, embarking at dawn from a lonely beach and proceeding through spectacular untamed country until you climb the Mountain of Fire. Rather than being a traditional adventure, this first-person game focuses on exploration and narration in the tradition of Dear Esther. You won’t meet any characters in-game, and will encounter only one specific challenge: a place where you must decide whether to jump or fall. Drizzlepath contains no puzzles and allows gamers to proceed at their own pace, choosing at any time to stay on the path and listen to the narration or to stray off the path to view more breathtaking vistas, interact with the local wildlife, or flirt with the prospect of injury and entrapment.

The location is enigmatic. As the game begins and you swim to the rocky shore, you encounter two lobsters, a couple of turtles, and several chickens, calling to mind the northeastern United States, but the mountains looming in the background are steep and tortuous, reminiscent of the southern Andes. They are clearly volcanic, providing a rugged backdrop. The trail winds ever upwards, leading away from the beach and snakes through the grassy foothills, bordering stands of trees and fresh water ponds. The skies are partially cloudy; the pathway corresponds to the edge of an incoming storm, so that as you walk the sun glimmers through the rain, providing a constant shiny drizzle. If you turn away from the sun you catch a glimpse of the male protagonist’s shadow; glancing straight down reveals his denim trousers and leather boots. As you follow the contours of this “drizzlepath” and look up, drops of rain fall onto the screen and dribble downward with an almost hypnotic effect.

Lovely folk tunes plucked on a guitar occasionally add to the relaxing atmosphere early in the game. The narration that accompanies the music, however, is anything but relaxing. The female narrator evokes a sense of danger and dread, offers morsels of philosophy, and occasionally adds more whimsical, even nonsensical comments – describing mountain odors as a family, for instance, or relating human passions to chickens. Unfortunately, though full of expression and emotion, the words are difficult to follow because of the narrator’s accent (the game is not subtitled). The narrative thus comes across as comprehensible phrases that surface among incomprehensible sentence fragments, triggered simply by reaching a certain point along the path. As you walk the music and voiceovers, in effect, blow along the breeze beside you: “…the momentum and the cosmic force of all the gods… the knife is hidden in the shadows… your cold bloodstains… the already blackened sky… madness.” 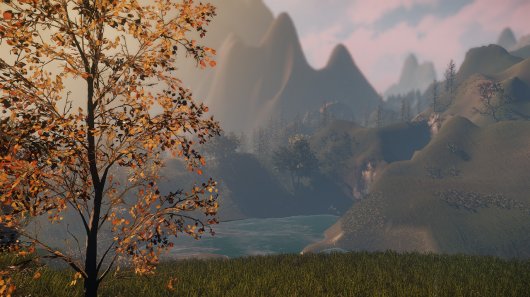 Who is the narrator? An ancient feminine spirit? A dead former lover? The hero’s own subconscious? To sate my curiosity I played the game multiple times, re-triggering each narration at its appointed place along the path, trying to make out the words as best I could, hoping to learn the reason for the hero’s journey. But of the fourteen narrative sequences, I caught only two of the shortest ones completely. Among the fragmented phrases, I discovered that the protagonist lives in contemporary times, that he frequently risks his life, and that he is followed secretly by a shadowy, threatening presence. (For all I know, I am that presence.)

I can only speculate that the hero/narrator relationship embodies a classic conflict – that of a young man who thrills to a life of danger in which he sacrifices for the good of his companions, community, or country. Meanwhile the woman in his life can only follow him step-by-step in her imagination, hoping that the parachute doesn’t fail, or that the boot doesn’t catch in the stirrup, or that the avalanche stops short on the rocky mountain path. Is a heroic life superior, heeding the call to embrace risks and challenges? Or should peace of mind and safety be overriding concerns?

As the mystery of the hero builds, the journey progresses. Some gamers may choose the logical path, but I am not one of them. I spent the first hour swimming alongside the trail in any available body of water (there are many). When swimming, you can see the hero’s arms sweeping forward in a stroking motion. If you stop swimming, you slowly sink. Underwater, the rocks and plants at land’s edge can be seen through the ripples and slanted light, with bubbles rising upwards. 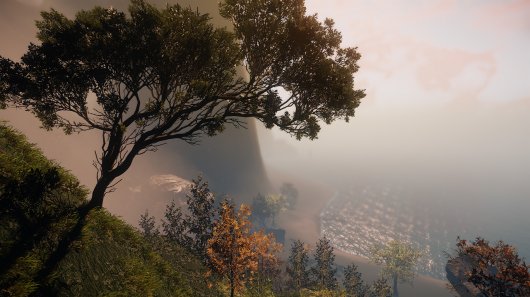 The environments above the water’s surface are more detailed and even lovelier without bubbles obscuring the view. This realistic 3D world can be explored from every angle, using the WASD keys to move and the mouse to pan. Remarkably, the visuals are the work of a single individual, Tonguç Bodur, and Drizzlepath appears to be his first published work.

Everywhere you look there are different types of plants – leaves, grasses, cattails, shrubs, lily pads. The sun glints through the trees as intricate shadows sway in the wind. Rocky terraces run in bands along hillsides. Mountains leap toward the heavens, their tips jagged with the force of ancient eruptions. I felt compelled to take numerous screenshots, because so much that I saw merited chronicling to be examined again – the sky, the wildlife, the rippling water, the light’s effect at different angles, a shot framed by foliage, impressionistic close-ups of tangled branches and leaves. After three hundred screen captures, I tried to restrain myself – to focus only on the most memorable of the visual highlights. Then I snapped a hundred more.

The quality of the graphics is occasionally inconsistent, however. Waterfalls gush in chunks and the distant hills need more detail. On rare occasions, an object like a shrub suddenly pops into view as you pass. I tried changing the graphic quality setting through the main menu to address this issue, but it made no difference. 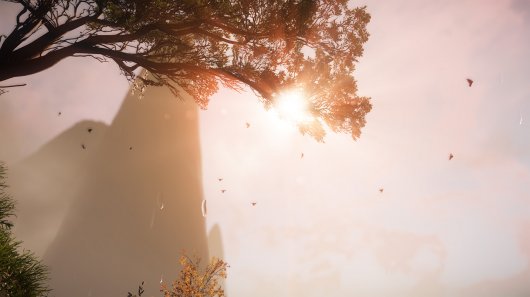 Here and there you’ll find evidence of prior human occupation: abandoned cabins, fences that can be knocked down, wooden signposts, a bronze statue, a beached rowboat. Men and women lived here and then left. Why they came and then departed a place with so much natural beauty, again, are mysteries.

You can’t pick anything up as you roam, but your movements affect your surroundings. Startled flocks of birds soar into the sky. Stand by quietly and the birds settle around you, only to take wing again when you turn towards them. Chickens scurry into the grass when you approach and frogs leap desperately away. Ambient sounds match the environments and the wildlife. You’ll hear the slither and crunch of footsteps, the whir of wings, the lapping waves, the chirping of crickets, and the howl of the wind. 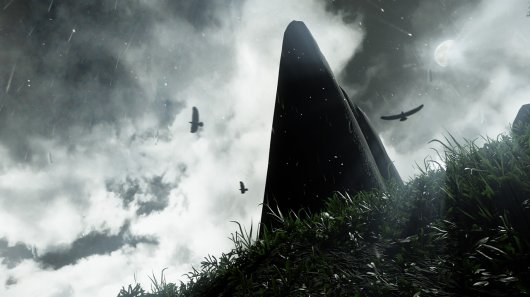 Leaving the trail can be dangerous. I once tried to climb a tree and ended up suspended from the branches, legs dangling helplessly below me. I’m not sure if this was a glitch or a deliberate trap – since there are other places that purposely stall your progress, I’m opting for the latter. Another time I tumbled down a hill into a steep depression, blood splattering the screen as I fell. Climbing out of the pit proved impossible.

If trapped and unable to work your way out of a dilemma, you can return to the most recent checkpoint. Checkpoints occur every ten minutes or so and can be found only along the pathway, so returning to one sends you to the nearest place along the trail. You can’t go back further than the most recent checkpoint, however, except to start from the very beginning. Even when you leave the game, you cannot save your progress. Next time you must start the journey again from the beginning.

If you follow the beaten path and don’t deviate at all, Drizzlepath will take less than an hour to finish. By doing this you’ll hear all the music and narration, but you’ll miss a good deal of what’s there to discover – close-up views of the foliage, the habits of various creatures, scenic views along many of the hills and waterways, and the ability to get a sense of the entire lay of the land. Completists – for instance, those who want all five of the Drizzlepath trading cards stashed in the Steam Inventory – will spend a lot more than an hour in-game. Though I haven’t figured out exactly what you must do to collect each card, my guess is that it requires getting close enough to either touch the animals or to discover their hideouts. This is rather easy with the turtles, but much more difficult with the wildlife that moves quickly. I’ve spent more than eight hours exploring and still haven’t managed to collect the frog and eagle cards. 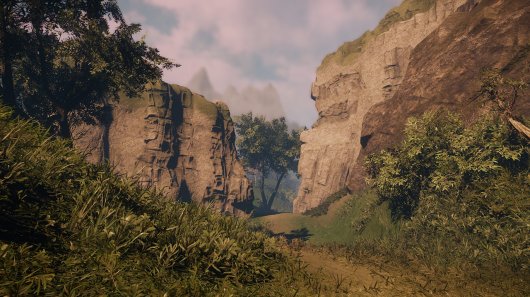 Late in the game, night falls and you find yourself on narrow, slippery mountain trails with snow falling from a starry sky, flakes glowing in the moon’s cold light. The mountain tops aren’t as elaborated as the verdant landscapes below, but they have their own stark beauty. Here the music changes too, becoming more ominous, varied and modern.

A plot twist at the end of Drizzlepath caught me by surprise, and the journey comes to a satisfying close. But the ending also contains enough ambiguity that it’s possible to posit ideas and debate different theories about what’s really going on.

This is a place where opposites meet – rain and sun, water and sand, light and darkness, life and death. Though you won’t find any character interaction or puzzles here, you must wander, swim, climb, observe closely and listen carefully to see and understand all that is offered. The naturalistic graphics are splendid, the ambiance strangely alluring. Repeated trips along the path and the various forays off it left me stymied at times, but also fascinated, overcome by a breathless sense of awe. Drizzlepath  offers a laudable sojourn that, despite its limitations, will prompt adventurers to look deeper. Traveler, don’t pray for fair weather on your journey. Rather, seek out the storm’s leading edge with its trials and perils, which can drizzle a pathway to the stars.


A solid adventure that is generally enjoyable, though it lacks enough polish or ambition to recommend without caution.

GAME INFO Drizzlepath is an adventure game by Tonguç Bodur released in 2015 for PC. It has a Illustrated realism style, presented in Realtime 3D and is played in a First-Person perspective. You can download Drizzlepath from: We get a small commission from any game you buy through these links.

What our readers think of Drizzlepath