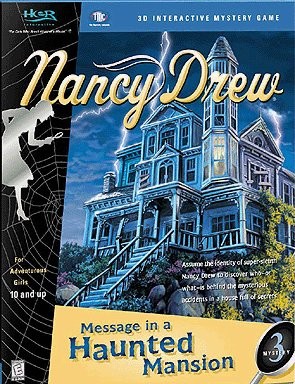 For most people, the name Nancy Drew either evokes images of hardbound yellow books about the famous teen detective, or Pamela Sue Martin, the star of the 1970s TV show. But adventure fans also know Nancy as the star of Her Interactive's long-running series of point-and-click mysteries. With no new mystery coming from the teen sleuth this fall, we decided it was high time to turn our attention to one that we missed the first time around. Released back in 2000, Message in a Haunted Mansion was just the third game in a series now into its thirties, and the story is based on the 1995 Nancy Drew Digest book by the same name. Feel like playing something spooky, creepy and puzzling? You're in the right place, as even 15 years after its original launch, this game remains one of Nancy’s best.

The adventure starts with Nancy explaining the premise of the game and the backstory of the case: she’s off to San Francisco to investigate strange accidents that are happening at a friend’s bed and breakfast while it’s being remodeled. Once you get there, however, you find out the truth runs a lot deeper than that, with each of the four characters in the house concealing both secrets and motives, not to mention the secrets that the mansion itself is hiding, along with a historical twist. The plot involves Nancy investigating the modern-day accidents as well as trying to piece together the story of what happened in the house a hundred years earlier, with each half essential to the other.

In terms of basic mechanics, the game is intuitive and the interface is easy to use. The little magnifying glass-shaped pointer is a cute touch, and the controls for moving around definitely represent a step up from the previous games in the series. Rather than using different colored magnifying glasses, now Nancy moves around using directional arrows and zooms in or moves forward with a single red-rimmed magnifying glass. It’s a much simpler system and the arrows make it much more intuitive to use. The biggest problem I have is the lack of an in-game note-taking device. There are plenty of clues and hints to both the larger mystery and the individual puzzles you encounter, but only the biggest plot points with few details are stored in a notebook in Nancy’s suitcase (which is easily missed while playing). Nancy remembers everything that happens so she can ask suspects about anything you’ve seen and use her knowledge to trigger plot events, but when you’re trying to think of the last verse of a rather long poem, that doesn’t really help you out much. A much more detailed and convenient notebook feature was wisely added to later games in the series, but here the problem can only be solved by keeping good old pen and paper with you while you play. 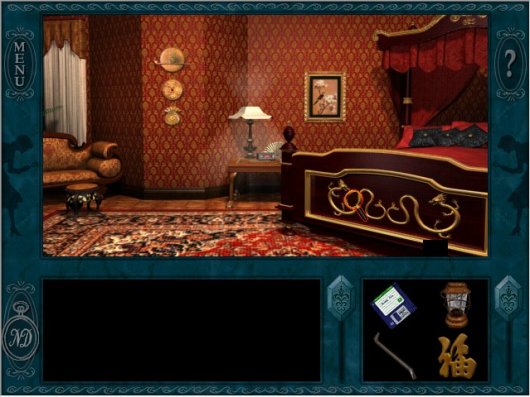 Puzzles are a huge part of the game, second only to snooping, and Haunted Mansion has a great selection. There’s everything from piano puzzles to tangrams to mazes, and no type of puzzle is repeated twice, so if you find something particularly difficult, relax, you only have to do it once. They all make sense in context, there’s no feeling of “this was thrown in by the developers just to make the game longer—it's ridiculous,” and none of the puzzles require additional instructions or explanation, which is a personal pet peeve of mine. If you get really stuck, you can always use the in-game help system and phone one of Nancy’s friends for advice, which is very helpful for the most part. Of course, all of the responses are pre-determined so there’s no guarantee that the exact part of the puzzle you’re stuck on will be the part they give you advice about, but the system is a very effective one overall.

As good as the puzzles are, the setting and characters are what truly make this a great game. The four characters are all completely different: there’s a psychic, a handyman, a businessman and the B&B owner, and they’re all quirky, unique people with great dialogue and fun interactions with Nancy. The conversations are never dull; you’re constantly learning something new either about the house and the mystery or about the characters themselves, or even just a bit about the history of San Francisco. Considering it’s not a terribly long game, the characters are all nicely fleshed out. None of them are safe from your scrutiny during the investigation, not even the owner who requested Nancy’s help, and everyone is hiding something. They’re all essential to the plot and seem like they belong there, which gives the game a really cohesive feel.

When I first saw that the setting was an old B&B in San Francisco, I didn’t think it would be particularly spooky. B&Bs evoke images of kindly old ladies bringing you eggs and toast for breakfast and too many fluffy pillows on a bed, certainly not ghosts and creepy would-be killers. The game really steps up to the plate in that department, however, as the mansion is the perfect state of dilapidated—rundown and old enough to be spooky, without feeling like it’s a death trap that’s going to crash down around your ears at any second. There are all kinds of nooks and crannies to explore, plenty of secret passageways and tons of little creep-outs from the developers, like a carved swan side table that springs to life momentarily before going back to being inanimate and almost makes you wonder if you were imagining it. Unfortunately, you don’t get to go outside or explore San Francisco because the plot doesn’t require it, but there’s so much to discover inside the house that it’s not really a letdown. 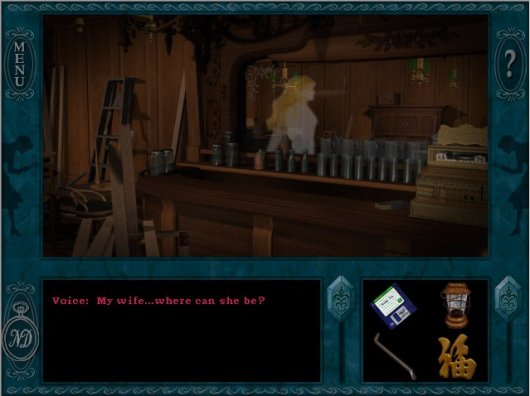 The graphics are a bit dated now, but they still hold up as solid quality. Everything in the game is pre-rendered but only your interactions with the characters and a few cutscenes are animated. The character models definitely give away the game’s age, as they’re much more cartoony and stiffly animated than the later iterations in the series. That being said, neither the characters nor the backgrounds are cringeworthy to look at. If you’re someone who plays a game for great graphics, Haunted Mansion isn’t it, but it’s got that early 2000s vibe that’s just enough to fondly look on as “almost retro.” The backgrounds are much the same as the character models; they’re well-detailed and gorgeous to look at but not very crisp by modern high-definition standards. My personal favorite area to explore was Nancy’s bedroom, decorated with old Victorian-era Chinese furnishings and artwork including statues and tapestries. The attic that hasn’t been touched in what looks like over 50 years is also fun to explore, with lots of creepy details such as a baby doll’s head just lying on the counter and broken-down furniture scattered everywhere.

Game sounds are an integral part of creating the spooky atmosphere, and the soundtrack delivers. As with the graphics, the music shows some age, because it isn’t as crystal clear as the audio of today’s games. It fits with the slightly dated look however; the two aspects go together seamlessly. The entire time you’re walking around and exploring the mansion, there are eerie tracks playing in the background. You’re not even safe when you go to the main menu, which also has a somewhat menacing score. They’re very atmospheric tracks and wouldn’t be out of place in a horror movie, lilting piano melodies playing in the background as the main character explores the haunted house while someone’s quietly sneaking up on her. The music fits perfectly with the setting, and the voice acting—while nothing to write home about—is solid and the characters are believable and lively. 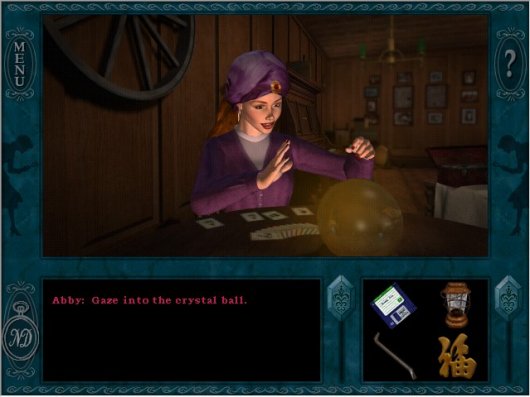 One thing to consider so long after release is that the game has been known to run into technical issues on modern operating systems. Her Interactive's website has great troubleshooting tips, however, as well as a technical support message board. I haven't seen an issue yet that doesn’t have a workaround, but don't be surprised if you have to fiddle with some settings after installing it, particularly on Windows 8.

Even after all these years, Message in a Haunted Mansion is still one of the best games Her Interactive has ever produced. Witty and fun dialogue, combined with a spooky setting and plenty of opportunities for snooping, challenging but not impossible puzzles, and an intriguing two-pronged mystery that you actually want to get to the bottom of are all part of the winning formula that should take upwards of 5 or 6 hours to complete. The game is unavoidably showing its age in the graphics and sound department, but is it still worth playing if you’re a mystery or puzzle lover, want to scare the pants off yourself, or just a Nancy Drew fan in general? Absolutely.

NOTE: Flashback reviews are evaluations to see if games of the past have held up well enough for players to enjoy playing today given the limitations of the available technology on initial release. They are not intended to represent the verdict at the time that the game was released.

Though showing its age more than a decade after release, Message in a Haunted Mansion remains a classic for Nancy Drew lovers or anyone who enjoys puzzle games and doesn’t mind getting a little spooked.

GAME INFO Nancy Drew: Message in a Haunted Mansion is an adventure game by HeR Interactive released in 2000 for PC. It has a Illustrated realism style and is played in a First-Person perspective.