That’s what I was thinking when I received an invitation, the night before the Game Developer’s Conference, to meet with Lexis Numérique’s Djamil Kemal to see Red Johnson’s Chronicles for PlayStation 3. I may not have recognized Red’s name, but I certainly knew of the French developer behind such unusual PC adventures as Missing: Since January and The Experiment. Since I’d never heard of Red Johnson, I entered the meeting expecting to see a broken game in its early stages. Instead, I was treated to a demo of a slick, fresh adventure that’s almost ready for prime time—and that’s a good thing, since its release is only a couple of months away.

Lexis Numérique describes Red Johnson’s Chronicles as a mix between CSI (for its investigation) and Professor Layton (for its puzzles). Playing as Red, a smart-ass private eye, you investigate a murder in a gritty urban setting reminiscent of New York City. If you’re getting a twinge of déjà vu, that’s because this isn’t Red’s first game appearance: he also starred in the incredibly hard to find Metropolis Crimes, which had a limited European release for Nintendo DS. But despite sharing the same protagonist, game world, and general concept, Red Johnson’s Chronicles is an all-new story with graphics and gameplay specifically designed for a home console experience. 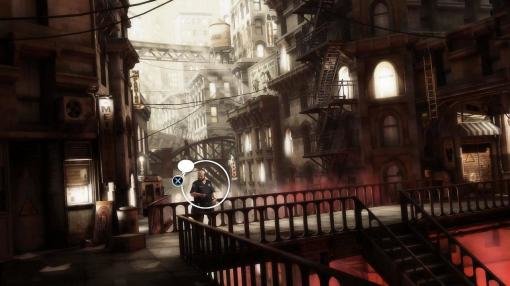 While CSI and Professor Layton influences were prevalent in the demo, I think the comparisons do the game a disservice. The investigation is less procedural than in CSI and the puzzles are far less random than in Professor Layton. Instead, Red Johnson’s Chronicles seems to be a game that integrates investigation and problem solving in just the ways you would expect a private eye to use them. A man named Ed has been murdered. He’s the most hated man in the city, so of course there are plenty of suspects. Red’s work includes questioning these suspects via interactive dialogues, investigating scenes for clues and gathering relevant evidence, breaking into locked rooms and safes by cracking codes or disarming alarm systems, and even kicking some butt when the situation requires it.

The most prominent Professor Layton influences are the game’s currency and hint systems. Red earns a certain amount of money after successfully completing an action sequence or solving a puzzle. This money can be used at any time to buy tips from an informant. Kemal explained that money is never an issue; even small achievements come with a reward, so players should always be able to buy a hint when they want to. There are three levels of hints, so you can get one for a little nudge or ask for all three if you want the answer handed to you. Speaking to the informant does affect your score at the end of the game, however, so those who refrain from using him will get added satisfaction in the end.

Unlike Professor Layton, Lexis Numérique has tried to insert only puzzles and minigames that have something to do with the story (however loosely). One that I saw involved a Rubik’s cube-like slider that had to be configured correctly to disarm an alarm. At another point, when Red needs to figure out the code to open a safe, the numbers he’s seeking are contained in a nearby painting, hidden object-style. On the CSI end of the spectrum, Red needs to manipulate 3D inventory items to find clues (such as rotating a can to locate a fingerprint) and compare pieces of evidence to find common elements between the two. (This is done within the inventory screen; no need to travel to a crime lab!) And some of the gameplay is simply good old adventuring—for example, to lure a suspect out of his apartment, Red must return to his office, look in a file drawer to find the man’s phone number, then call him (you actually dial the phone using the controller) and figure out the right thing to say to convince him to leave. 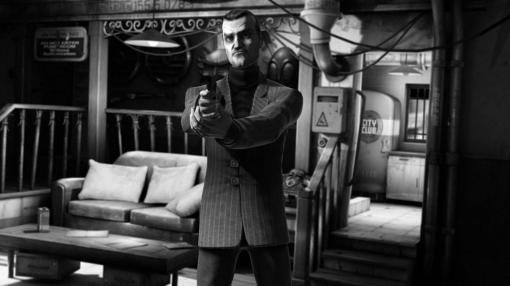 Although the gameplay is forgiving in ways adventure gamers have come to expect (you’re not going to die or get yourself into unwinnable situations), the developers are trying to establish a sense of urgency with certain features. In some dialogues you have to choose what Red will say before a timer runs out, a convention that has been used in games like Indigo Prophecy. Lexis Numérique has taken pains to keep dialogues short and punchy, with a rhythm like you’d see on a TV cop show as opposed to the narrative-laden diatribes we often encounter in adventure games.

Action sequences play out through Quick Time Events during which you’re prompted to tap or hold certain buttons. If you fail, you get the option to try again. These sequences seemed no more taxing than a scene from Heavy Rain or what Telltale’s cooking up for Jurassic Park, and Kemal emphasized the team’s commitment to providing adventure gamers with a user-friendly experience. In fact, a full three months of Red Johnson’s year-and-a-half development have been devoted to testing and refining the controls.

The art direction is impressive, displaying polished graphics that ooze with style. Detailed urban scenes are often presented with the camera slightly askew and the sepia-toned color palette shifts to black and white during key scenes (with only red blood appearing in color). Such aesthetics further Red Johnson’s cinematic feel and seem like natural choices for a PlayStation gaming experience. Though 1970s TV shows like Starsky & Hutch and The Mod Squad are an obvious influence (as you can see in the teaser video below), with its high-definition graphics Red Johnson comes across more like a big-budget remake.

The game uses a mix of first- and third-person perspectives, with investigative scenes taking place in first-person and Red appearing on screen during conversations, cutscenes, and QTE sequences. While investigating a scene, the player uses the analog stick to move a cursor around the screen. When this lands on a hotspot, action icons appear that show what you can do, such as a magnifying glass for a close-up view or a dial to use the phone. These are activated by pressing the appropriate buttons on the controller. Red carries a notebook that lists his objectives and has easy access to a map for traveling between locations.

Lexis Numérique has paid special attention to the game’s voice acting, ensuring that each character has a distinct and memorable way of speaking. During the demo I got to hear a few of them, including a thug named Carlos who sounded straight out of The Sopranos, an increasingly agitated woman who berates you from behind her closed apartment door, and a lapsed schoolgirl (or maybe she’s just dressed like one) with a strong New Jersey affect. It’s hard to say how such performances will play out throughout the whole game, but in isolation it seems like the careful focus on casting paid off.

Red Johnson will debut exclusively on the PlayStation Network this spring, with the potential for Xbox 360 and PC releases down the road. Why lead with a console many adventure gamers don’t own? Kemal attributes the decision to none other than Heavy Rain, which Lexis Numérique believes has left the PS3 audience hungry for more games like it. Red Johnson may be less ambitious than Quantic Dream’s cinematic classic, but it also has more traditional genre gameplay, which many adventure gamers will likely consider a win. With the game coming in May, we’re going to find out soon enough.