Jack Keane and the Fire Within archived preview

It's been four real-life years since we left English adventurer Jack Keane and American cowgirl Amanda adrift on the ocean. In Jack Keane and the Fire Within, three game years have passed and Jack is on the trail of a mysterious rumoured treasure of unmeasurable worth. Recently I had the chance to sit down with Daniella Marigold from the PR agency representing the game’s publisher, and even play a few selected scenes for myself.

At the start of the game, Jack is in a prison in Shanghai. He's been there for a while, as we can see from his full beard and dirty, ragged clothes. He got himself locked up for a specific reason, to gain the trust of a shaman who has more information on the location of the treasure he's after… and he succeeds! When the shaman dies he confides his secrets to Jack and gives him part of an amulet, which is an essential clue to the whereabouts of the treasure. Unfortunately, as usual Jack didn't think the plan through very well, and now he has no means of getting out of the prison. He has tried to escape – in vain – numerous times, so the guards are watching him carefully. The other inmates don't like him much either. They've scheduled a fight for him that he has no way of surviving, and it is set to take place this very night, so he’d better get a move on. 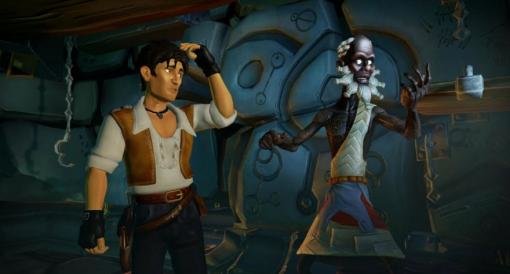 Of course Jack eventually manages to escape, and after a hot bath and a good shave he sets out on a new journey. Along the way he’ll meet many characters, some of whom we know from the first game, such as Amanda and Agent Montgomery, as well as many new ones like Karl, Eve, and a brand new villain. Naturally, Jack is not the only one to have heard of the treasure, so hot on his heels is the evil professor Umbati. Karl is a young engineer who has built a car that’s borrowed by Eve, a beautiful photographer, although she isn't very good at driving it. Eve is the opposite of Amanda; she's a smart, sophisticated, elegant and somewhat arrogant city girl, whereas Amanda is a down-to-earth country girl through and through, preferring to solve things with her gun rather than thinking her way through like Eve. The two are rivals for Jack's attention, but the story of The Fire Within brings them together in such a way that they'll have to cooperate to succeed in their other objectives. The tension between the two deepens the characters, enhances the immersion and brings some additional funny dialogues with it.

On one such occasion, Amanda and Eve are in the car in a desert, chasing a zeppelin with an imprisoned Jack on board. Eve is driving, and Amanda has her trusted gun. We, as players, can freely choose between Amanda and Eve in a lengthy puzzle sequence that is reminiscent of the plane puzzle in the first game. By finding and combining objects, talking to Karl on the radio to learn how to change gears, shooting at the zeppelin, and solving problems with the engine to speed it up, the two heroines have to catch up and free Jack. Eve is confined to the driver's seat, of course, but Amanda can clamber all over and even around the car using the running boards. They can discuss their situation together and even pass items between them. 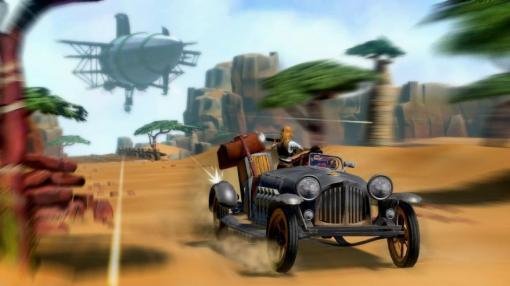 Using a clever technical trick, the developers were able to string an unlimited number of pieces of scenery together during this scene, creating the illusion of driving through a seemingly endless stretch of desert without the shrubs and stones beside the road noticeably repeating themselves. Until you’ve solved the entire puzzle, the car will keep driving on and you'll never catch up with the zeppelin. The ladies are not too busy to keep chatting and bickering through their ordeal, ensuring the scene is not only exciting and tense but also entertaining and funny. For several steps in this sequence, and others in the game, different solutions are available depending on which character you favour, and this will eventually influence the ending of the game. Another example where multiple solutions are offered is a scene where the two girls are making their way through a cave with bats. You can choose to scare them off or simply daze and confuse them, depending on which of the two characters you select.

In the first game, Jack was able to climb onto ledges. This has been replaced with jumping (which can be done at any time and not just at specific places – it's up to the player to find out where a jump is useful) and there is one scene in which you'll need to time your jumps over some rolling barrels being thrown at you. But this is definitely not an action game and you'll never need to aim your jump very precisely. If you fail anyway, you can simply try again. Jack does have to conquer some 'enemies' by fighting, but this is a kind of homage to the famous insult-swordfighting puzzle in Monkey Island, where you need to 'attack' several people to learn new moves to counter theirs. You'll need to learn both offensive and defensive moves to win against the key people (most fights are done in several rounds). If you can't counter a specific move, you won't die, you'll just be defeated for the time being, and Jack can come back at any time to initiate the conflict again. 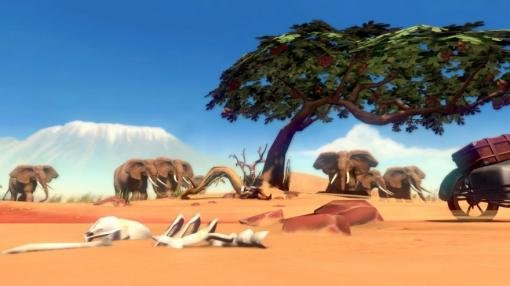 Apart from Shanghai, locations in the sequel include Egypt and other places in Africa such as Mount Kilimanjaro, and also Deck13's home town of Hamburg. In its harbour, you'll need to end a strike and gain access to a building by learning how to control a crane. After 14 games, the German developers had never set one in Hamburg, so they felt it was about time to make some fun of their fellow countrymen – for instance, by depicting a harbour master in a stereotypically bureaucratic way. The same English voice actors have been hired to voice the main characters, which means Lani Minella (best known for her work on Nancy Drew) is on board for Amanda again.

The game uses the 3D engine originally developed for the developer's hack'n'slash action-RPG Blood Knights. The graphics here are gorgeous, and still very similar in style to the first game: bright, colourful and cartoony, with lots of nice details to make every location look unique and alive. Dynamic camera views further  accentuate the adventurous atmosphere of the game. The humour, at least in the German version, looks to be on par with first game, and the difficulty level should be a little bit higher.

When I first saw the game it was a traditional point-and-click adventure like its predecessor. Since that time, however, the game's German release has revealed some big changes made in the way you control the characters. Now you click and hold the left mouse button and point the mouse in the direction you want to go. You'll keep walking until you let go of the button, so you can move around and see all the corners of a room this way. You can still click directly on items and exits to make Jack move automatically, but he'll stop if anything is in his path. When he encounters a ledge or something blocking his way, clicking the right mouse button makes him jump up onto (or over) it. Alternatively, you can use the keyboard (WASD) to move around.

The new method is a bit cumbersome and takes some getting used to, but I personally had no trouble moving Jack exactly where I wanted him to go, and I am not a very dexterous player to say the least. However, if you really hate this kind of control scheme, there may yet be hope, as in response to many German players complaining about the interface, Deck13 have announced they are working on a patch in the hopes of making classic pointing-and-clicking possible once again. If they succeed, they'll probably integrate that into the English version as well.

I enjoyed playing Jack Keane and I like what I’ve seen of the sequel so far, regardless of the control scheme. I'm looking forward to following Jack on his next exciting adventure, with the possibility of trying out the different paths and solutions this time. The German version is available now, though there's still no official launch target for the English version to come.

Dag
I've been looking forward to this game for a long time, but that part about the changed control scheme worries me. I really hope they fix it in time for the English release. I find it a bit strange that they would even take the risk to remove point'n clicking entirely. That rarely sits well with veteran adventurers.

diego
I've read some German reviews and my fears are confirmed - it scored worse than the original in all of them. Hoping Deck13 will get back on track.

Zifnab
Ah, so Jack was meant to be an English adventurer? I must have missed that from the first game, though you can't really blame me listening to Jack's suspiciously American-sounding voice (in the English version). Still looking forward to this. The first game was very funny.
Advertisement
archived preview
continue reading below