How harmless can a blue stuffed rabbit be? We first met Harvey in Edna & Harvey: The Breakout, where he helped Edna escape the asylum in which she felt she had been locked up against her will, cracking wise and coaxing her into some acts of vandalism along the way. The mischievous plushie now returns in a spin-off adventure in Harvey's New Eyes, this time as the companion of a different little girl. Lilli attends a convent school and is very shy and very well-behaved. No matter how unfair the tasks she is given may seem, she carries them out without protest and seems incapable of having angry thoughts or displaying disobedient behaviour. Both the other students and the Mother Superior take advantage of her by giving her the dirtiest, most boring or simply impossible tasks, and constantly bully and tyrannise her, yet still she never complains or rebels. We were shown some scenes from the game at the gamescom in Cologne, and I've since played the first chapter in German, and it’s already clear that while you can take Harvey out of the loonie bin, you can’t quite take the loonie bin out of Harvey.

While Lilli means to do only good, we soon learn that she accidentally causes some of her fellow students to die horribly, because everything she does tends to go spectacularly wrong. When she is told to lure the termites from a tree, for instance, she succeeds in doing so but kills a fellow student in the process. Lilli herself sees nothing of these unexpected results, as whenever she is about to see anything that might frighten her or otherwise be unpleasant, a bunch of 'censor gnomes' appear out of nowhere and paint the whole scene a nice shade of pink. Lilli only has one friend, Edna, the girl we met in the first game who is now a little older. How she came to attend the school after her attempted escape from the asylum, Daedalic’s Claas Paletta didn't want to say, as that is for the player to find out. 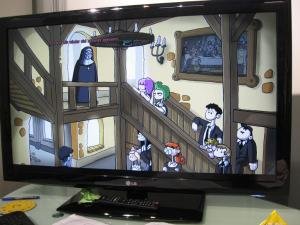 The school's Mother Superior, meanwhile, can't stand children at all and has had enough of their disobedience. She hires a specialist in child psychology, Dr. Marcel. He claims to be able to hypnotize anyone who misbehaves and change them into the best girls and boys ever. Anyone who has played The Breakout will know that nothing good can come from his presence. While it is not strictly necessary to have played Edna & Harvey before you start Harvey's New Eyes, it is highly recommended as it will give you a lot more insight as to why Edna immediately decides to attempt another escape, this time with the help of Lilli, when she learns that Dr. Marcel is about to re-enter her life.

Dr. Marcel brings along Harvey, the stuffed rabbit, whose eyes have been replaced to facilitate hypnosis. Lilli is the first 'subject' on which Harvey is tested, and it causes psychic blocks to appear in her mind. Whenever she tries to do something that is prohibited (e.g. she has been told she should not play with fire, touch sharp objects or tell lies) she will get an electrical shock and refuse to do it. To overcome obstacles in the game, you'll need to enter Lilli’s subconscious to fight the demons representing these prohibitions in the form of (mainly dialogue-based) puzzles. If you succeed in convincing a demon that little girls sometimes do need to play with sharp objects, you can then switch 'off' that particular forbidden action at will, but only one at a time. For this purpose there is a secondary inventory that lets you choose the rule you'd like Lilli to break.

Playable in full HD, the graphics are once again deceptively simplistic-looking cartoons that manage to create a fantastic atmosphere, as they are effectively used to tell the story from the perspective of an innocent child. Apart from the convent school, locations include a small village and the asylum from Edna & Harvey, which has undergone some changes since returning players last saw it, though there is still a lot that will seem familiar. Most backgrounds are almost entirely devoid of any movement, as animations are still sparse and fairly crude, which the original game poked fun at with self-referential humour.

A big change from Edna & Harvey is that it is no longer possible to combine everything with everything. In that game it was part of the fun to try the wildest imaginable things just to hear the funny response. Even if you knew it was nonsensical to talk to plants or combine a coat hanger with a bucket, it was possible to try it and trigger a unique remark. This is no longer the case since it doesn't fit with the character of Lilli, who simply does what people tell her and doesn't try creative things. Each hotspot has only two possible commands, one of which is 'look at' and the other a contextual one. The change does make for a sleeker, less cumbersome interface and a lot less fear of overlooking that one crazy combination that you didn't think of but the developers did and made it the only way to progress the game. On the other hand, it takes away some of the charm and it makes the game seem somewhat easier than its predecessor. 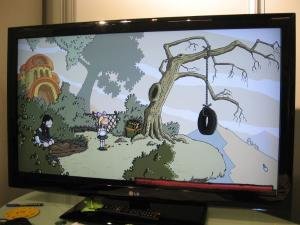 Even with the more streamlined interface, you'll still need to think carefully about your current goal and possible courses of action. The story spans only three chapters in total, but Daedalic expects the game to take about ten hours to finish. There are a few standalone puzzles and minigames this time, such as a grid-based logic puzzle with a series of partial clues to connect and a chess problem, but these can be skipped if so desired. The interface is simple and intuitive, though the choice to use Harvey's red eyes as a hotspot highlighter doesn't always work very well, as it is sometimes hard to see them against the background.

Another change is that Lilli herself doesn't speak much, and when she does someone always interrupts her. While this takes some getting used to and makes it somewhat hard to get a feeling for her inner thoughts, there is a great narrator that always has a sarcastic comment at the ready, providing many funny moments with a dark, cynical overtone that will make you think about themes like innocence, friendship and free will even after you've finished the game. He also provides some clues by telling you what Lilli is – or isn't – thinking about. For instance, he states "I would have liked to tell you that Lilli was thinking about locking up her fellow students, but she wasn't. She was thinking about ponies." This is certainly one of the highlights of the game for me, and I'm very much looking forward to playing the full version, though for now we still await any word on a localised English release.

Majsan
Are there any news about an english release of this game yet? Resently finished Edna & Harvey and liked it very much...

Phaid
Apart from the restriction when it comes to using items on everything, it sounds great. The original had two endings, both rather pessimistic, so I'm curious how they'll explain what really happened to Enda and Harvey. E&H got bashed by the press, especially Eurogamer undeservedly in my opinion, it was one of the best adventures I've played in years.

TalC2
Thanks, much appreciated! Now English please (or I'll just have to re-learn Deutsch, after years of foolishly neglecting it)
Advertisement
archived preview
continue reading below