The adventure genre has traditionally been the one most commonly associated with great stories. In recent times though, storytelling has become increasingly emphasized in other genres, even action games, often surpassing adventures in cinematic quality. So perhaps it was only a matter of time until someone said “If they can do it that well, why can't we?”. If it's up to Ukrainian developer Frogwares, The Testament of Sherlock Holmes is the game that's going to rise to that challenge and put the genre back in the spotlight. At this year's gamescom, we sat down with studio president Waël Amr for a preview of the great detective’s sixth PC adventure.

Right off the bat you notice that the graphics quality has improved sharply since the last game. Animation in particular is smoother and much more natural-looking. Those who got dizzy from the previous games won't find that effect entirely gone, but to help with that the game once again lets you switch between first-person and third-person direct control, or a point-and-click mode resembling a 2.5D game that actually lets you click the ground to move somewhere. The third-person camera can also be moved around the character independently, which helps both to find an angle you're comfortable with and to take in your surroundings while standing still. The advanced graphics options from Jack the Ripper are also still around. 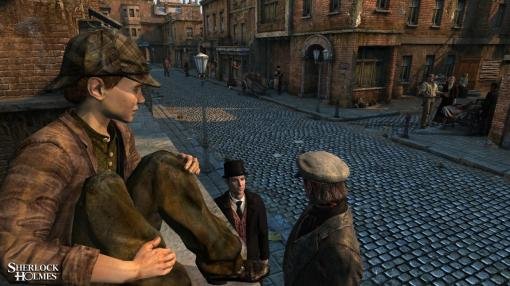 These upgrades are part of a broader move to attract more console players. After the last game, Frogwares and French publisher Focus Home Interactive got feedback from Xbox players in particular that they wanted more adventure games with 3D graphics and production values to match what other genres are offering. And Frogwares are eager to deliver, though Waël insists this does not mean forgetting about PC players, as some already speculate.

It does, however, coincide with a change in their approach to difficulty. Previously, insanely difficult puzzles were considered a good thing, and success was measured in no small part by how long it took people to finish the game. The way Waël talked about it, they were carefully watching the internet, counting the days until people started posting complete solutions. They now admit this was a “stupid” approach, and are now putting a lot of emphasis on accessibility and not getting stuck in the same place for too long. One part of this is that the harder puzzles can now be skipped after a couple of minutes. Another is that if you overlook an important hotspot for too long, you can turn to “Sherlock's Sixth Sense” for help, which will reveal a single hotspot you should look at or action you should take. This sixth sense takes a minute to recharge (a little icon briefly pops up when it's available again) and replaces the old ability to reveal all hotspots with a single push of a button, which was deemed to spoil too much of the player's fun. 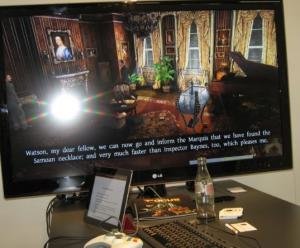 After three crossover-themed titles, die-hard Holmes fans should be pleased to know that Testament is both less predictable and more specifically about Holmes himself. The start is straightforward enough: in what amounts to a little tutorial, we are introduced to Holmes in a luxurious room at the end of a case involving a stolen necklace. After you gather a handful of important clues, Holmes goes into exposition mode, the necklace is recovered and the case is closed. Or so it seems.

Cut to 221B Baker Street the next morning. Watson is reading the newspaper and mentions a number of things that will become important later. A mysterious food shortage is hitting London's poor hard. A previously unknown prince claims he should be king of England and accuses Queen Victoria of being out of touch with the people. Most important in the short term, a journalist claims the recovered necklace is a fake, and Sherlock Holmes himself is an elaborate con man who stages his cases.

Just then, Inspector Baynes (who replaces Lestrade for the moment) comes in carrying the necklace. A small puzzle follows where you look at the necklace from all sides and find several signs suggesting it is indeed a fake, and not the one Holmes recovered just the other day. And now the plot starts to thicken. Instead of pursuing the necklace or anything in the newspaper, Holmes takes Watson with him as he heads off for an appointment with a local bishop. The bishop's assistant believes them to be with the police, and the reason for that becomes apparent soon enough: the bishop has been mutilated and brutally murdered. 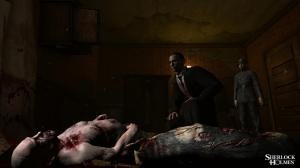 You may remember how Sherlock Holmes vs. Jack the Ripper used drawings to depict its murder victims, hiding the full horror of the scenes out of respect for the real historical victims. This game isn't like that. As the characters here are purely fictional, there is no restraint in showing this gory scene in its full glory. The circumstances of the preview largely negated any shock effect for me, but it was still unsettling and should leave more of an impression in proper play.

From here you pick up your real investigation, using all of the usual tools and methods. But you also go a bit further. Holmes intimidates the bishop's assistant in an uncharacteristically aggressive manner, in what is the start of a pattern leading up to using blackmail, burglary and even murder to achieve his goals. Given the title of the game, it is no big spoiler to reveal that this will eventually lead to his own death.

Thus players are left with two mysteries to sink their teeth into: the murder itself, and just what has gotten into Holmes lately. And all the while the background issues mentioned earlier become increasingly important. The promotional material also mentions a confrontation with Sherlock's traditional nemesis Moriarty; we can only guess how he ties into all of this. There should be enough time to carefully figure these things out, as the game is set to take 12-15 hours, with Holmes's demise occurring roughly two-thirds in.

All in all, The Testament of Sherlock Holmes looks highly promising, both in its own right and as a multi-platform release. This is not another console game ported to PC, or even a PC game ported to console. Instead, it is a bid to make an adventure game to challenge other popular console games on their strengths, including graphics standards and to some extent, their budget. (Without going into details, Waël mentioned Testament has a budget of several million, far more than most adventure games.) And Frogwares are bringing their A game.

That's not to say there aren't any pitfalls. This talk of a new approach to difficulty may have some people concerned that the game is going to be too easy, and I didn’t see enough to judge on that either way. For now we’ll have to hope that it will be enough, and that there is as much of a target audience as Frogwares believes. But after seeing some of this game in person, I'm cautiously optimistic. The Testament of Sherlock Holmes has been delayed a few times, but should finally arrive late in 2011. This year, the game's afoot.

It’ll be interesting to play, I think. However, I really liked the space-button way of telling you where all the hotspots are in the game. I’ve always disliked the hunting pixels hotspots in the games of yesteryear. Also, murder to solve a case - this is not in character with Sherlock Holmes…at all. Blackmail and burglary, yes, but murder - no. And what is wrong with using drawing and cartoons of victims? Seems to be Frogware is trying to appeal to a certain demographic here (young adults between 18-25), but they do not play adventure games - I think.

Being aggresive is a part of Holmes character I find, at least in the series where Jeremy Brett played Sherloch Holmes.

Dont hold your breath guys and ladies, I was disappointed with Jack the Ripper and how dumbed down the puzzles and overall game play was.  Cant imagine what this is going to be like, catering to console AG noobs.  Whats the point of playing an adventure game with a auto hot spot button and Holmes Sixth Sense oh god help me.  Thats the whole game, finding things!  The beauty of the originals was racking your brain for what seemed like hours with a scratch pad and pencil working out a puzzle.  I will get it just because I am a rabid S.H. fan but not going into this expecting “The Awakened”.  Oh Frogware where did you loose your way?

Sherlock Holmes games r PERFECT..
i just finished and liked The Awakened
and vs Jack the Ripper

the talk of making it easier makes me go crazy. why must every great franchise go down that path? the classics are always inevitably the early more challenging games of the series. i’m totally excited about increased production values and budgets, and I think it’s time AG’s get console game level respect, but I actually think watering down the difficulty only works to undermine the unique thrill of AG’s and doesn’t really do companies like FrogWares any favors.

Well, it certainly looks quite lovely. I’ll probably enjoy it more if the emphasis is more on story than puzzles this time around. Leaves me vaguely curious to know if they’re blowing out the budget because it really is the last installment, or if they have other things in mind.

Pah poppycock! Homes didn’t fell down the falls he staged his death to go chasing after Moran. Oh wait…it’s a new story. Anyway my point being: Holmes’s been dead before. He couldn’t stay dead back then and I’m sure he won’t stay dead now. What worries me however is that I probably won’t be able to play this game since it’s so technically advanced my laptop won’t be able to run it. I guess the developers were too busy making it a half console game(or something) they lost sight of their target audience. In fact from what I read game mechanics are more like in a HOG I mean: rechargable hotspot finder?, what was wrong with the normal hotspot finder? I think it’s a brilliant solution to pixelhunting. And the puzzles being dumbed down is not good either I think. I fear Frogwares has become to immersed in the world of casuals to see what makes an AG an AG. Of course that’s all rather bleak talk but I do sincerely hope I’m wrong. Frogwares has produced a lot of good games so far and I hope they continue to do so.