Review for Space Quest 6: Roger Wilco in the Spinal Frontier 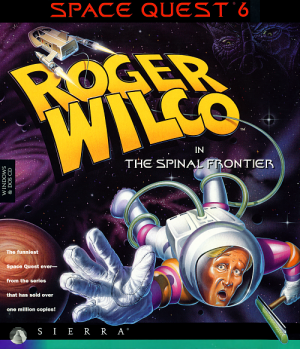 It must be frustrating to be Roger Wilco. No matter how many times he saves the day through a brilliantly improbable combination of inventory items, people still treat him like a fool, and he always ends up with a broom in his hand once again. It’s probably almost as frustrating as playing Space Quest 6: Roger Wilco in the Spinal Frontier. The last game in Sierra’s classic series went through a tumultuous development, as lead designer Josh Mandel left the project before the game was completed, and original series co-creator Scott Murphy came on to finish it. The end result, while unmistakably a Space Quest game in many respects, is often muddled, excessively challenging, and suffers from a lack of clear direction. Though fans of the series’ trademark humor and Sierra completionists may still appreciate the experience, most adventurers can safely skip what is certainly the weakest game in the franchise.

The story opens with Roger Wilco standing before a StarCon tribunal, being chastised for the numerous rules and regulations he broke during Space Quest V, ending with him being stripped of his rank. His display of heroism prevents him from being drummed out of the service altogether, and he’s soon transferred to the DeepShip 86 to serve as its janitor. Trouble finds him once again, however, as during a shore leave on the dismal Polysorbate LX, Roger is kidnapped by mysterious forces. Before he manages to discover the perpetrator and put a stop to their evil scheme, Roger will need to physically explore the Information Superhighway searching for data on his kidnappers, investigate the depths of space in pursuit of the villain who sent them, and shrink down Fantastic Voyage-style to enter a friend’s intestinal tract and hopefully save her life.

All that takes a long time to get going, however, as Roger’s final adventure suffers from a serious lack of momentum. At times it feels more like a series of interconnected short stories than a legitimate narrative. When you first control Roger, you are on Polysorbate LX with no stated goal or objective. The storyline has yet to begin, and won’t begin for a few hours to come. The only way to progress is to wander the town aimlessly until you encounter a randomly occurring Endodroid Runner who gives you a task. After you complete his task—a rather lengthy series of puzzles that has little relevance to anything—your second phase of aimless wandering commences. Once you’ve stumbled upon the next progress trigger, and completed another series of puzzles, you can finally unlock the area on Polysorbate LX in which you’re kidnapped, and begin the actual plot of the game. 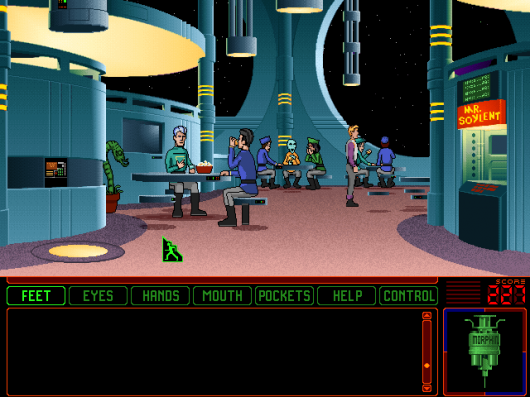 Space Quest 6 introduces a number of new characters, such as the stern Captain Kielbasa, the mysterious Dr. Belleauxs, and the beautiful (if you’re into Klingon-esque foreheads) Stellar Santiago. Most of the rest of the cast are either obstacles or joke machines. Only Santiago is really a vital part of the game, as she’s Roger’s loyal friend, love interest, and primary source of deus ex machinas. Some lip service is paid to Roger’s relationship with Beatrice Wankmeister from Space Quest V, but in the end the destined love of his life and future mother of his child doesn’t appear in the game, and is of little concern.

In all honesty, the only relationship you’ll likely feel invested in is the one between Roger Wilco and the omnipresent narrator, once again voiced by Gary Owens (returning from Space Quest IV). Owens’s constant taunting of Roger is the game’s primary source of legitimately funny writing, and his always professional delivery is like an oasis in a desert of awkward line readings. Actually, many of the minor characters are voiced competently, but the two with the most lines, Wilco and Santiago, seem to always be delivering dialogue off-rhythm, or with an emotion contrary to what the mood of the scene might call for. The humor often references sci-fi or pop culture with a Mad Magazine type of twist, such as putting the Three Stooges in Street Fighter II to get “Stooge Fighter”, naming all the drinks after sci-fi authors like Heinleineken, and borrowing a cat person from the Wing Commander series and making litter box jokes—but that’s Space Quest, and if you’ve liked it before, you’ll like it again here.

The graphics are undoubtedly the best of the series, taking full advantage of Super VGA technology, with smooth animation and environments full of rich details. The characters all look nicely cartoony and absurd. Polysorbate LX is so dark and grimy you’ll want to wash your hands, while other areas are delightfully bright and full of color. My favorite scene may have been Roger’s room on the DeepShip 86, which is full of souvenirs from the five previous games, with a close second going to the main office of the Information Superhighway, portrayed as a giant (now laughably old-fashioned) computer desktop. Although not highlighted at all, most interactive objects are easy enough to locate, with a simple mouse-driven interface that uses a panel of nouns on the bottom of the screen (i.e. Feet, Hands, Eyes, Mouth, etc.) to interact. If you’ve played many ‘90s-era games, the occasionally upbeat, occasionally ominous, MIDI-style music will seem familiar to you. Scott Murphy has said in interviews that the original musician left Sierra before the game was finished, which probably accounts for its not-very-notable soundtrack. 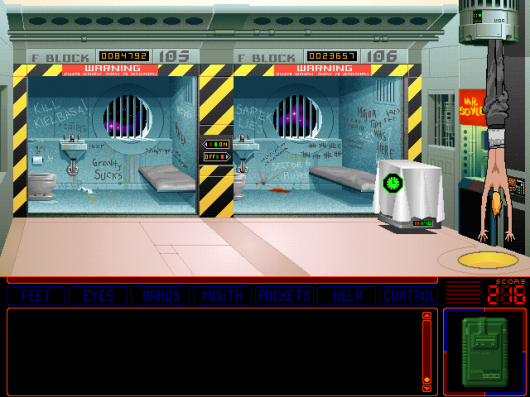 Sierra games were always known for challenging puzzles, but Space Quest 6 takes this direction to another level of brutality. I didn’t encounter any dead ends, and thankfully there aren’t any timed sequences where you’ll be killed twenty times in a row, but don’t think you’ll get off easy with the inventory or environment puzzles that make up the majority of the game. There are several incredibly difficult sequences where there are virtually (or literally) no clues to help you figure out what to do next or why. I’ve read in interviews that some of these are due to the change in designers partway through the development process. Examples include the lack of any in-game information about reprogramming the datacorder, which can only be figured out with a physical document that originally came bundled with the game (but doesn’t come with the Space Quest Collection, so have fun searching the Internet for it), and the zero build-up to a late-game puzzle about putting together some medicine. You should also search for a copy of the Periodic Table of Elements on your own and keep it handy, and be sure to write down the names of those thugs you meet—trust me on that one. And don’t forget to read the entire ComPost Database and write down any numbers you see there. Or, you know, just use a walkthrough.

Roger Wilco in the Spinal Frontier is a relatively long game, at least for its era, and feels even longer than it is. If you tackle each puzzle on your own, with no guides to assist you, expect to easily spend more than 12 hours exploring The Spinal Frontier. Unless you happen to have a dedicated “old-school” PC lying around for playing 16-year-old games, however, you’ll need to find a patch to get SQ6 to a playable state, and that includes the re-released Collection. But whether it’s even worth the bother is another question entirely. Though the graphics are great, the narration is skillful, and the humor is consistent with the franchise as a whole, the aimless design, weak plot and characters, and absurdly difficult puzzles make Space Quest 6 a difficult game to recommend to any but the most hardcore Roger Wilco or Sierra fanatics.

WHERE CAN I DOWNLOAD Space Quest 6: Roger Wilco in the Spinal Frontier

Space Quest 6: Roger Wilco in the Spinal Frontier is available at:

Though Roger Wilco fanatics may manage to find something to love here, most other players can safely skip the final entry in the Space Quest franchise.

GAME INFO Space Quest 6: Roger Wilco in the Spinal Frontier is an adventure game by Sierra On-Line released in 1995 for Mac and PC. It has a Comic cartoon style, presented in 2D or 2.5D and is played in a Third-Person perspective.