We get a small commission from any books sold.
All Bitmap Books
Written by
Kim Wild — February 26, 2010

Pirates have long been a great source of fictional inspiration, particularly in the world of adventure games. The genre has seen more than its fair share of comedic pirate antics, and there have even been some serious swashbuckling offerings over the years. Perhaps without fully realizing its influence, much of what we now accept as traditional pirate lore comes from Treasure Island, and at long last a game has finally tackled Robert Louis Stevenson’s classic novel itself. The result can be a pleasantly diverting high seas adventure at times, though its treasures are a little too well buried to do full justice to its inspiration.

A more or less faithful adaptation of the book, the game opens with a teenaged Jim Hawkins at his parents’ graveside. Now all alone, Hawkins takes over as the sole proprietor of an inn that has seen better days, in desperate need of both repair and paying clientele. At the moment, our hero has been stuck with a deadbeat ‘customer’ named Bill Bones, who is in possession of a chest he keeps under lock and key. With Jim fetching supplies from the cellar, Bill is ambushed by former shipmates searching for a treasure map. Failing to find what they’re after, they issue Bill the dreaded black spot: an inkblot on a piece of parchment that curses whoever receives it. The shock of such a discovery causes Bill a heart attack, leaving Jim Hawkins and his friend Antoinette Trelawney to find the treasure map themselves and escape the pirates.

Although it has been a while since I read Stevenson’s novel, many of the key events are carried over here and seem to get an accurate portrayal: the meeting of a scheming Long John Silver, putting together a crew to sail the Hispaniola to Treasure Island, and the subsequent ship mutiny. Jim Hawkins’ naïve and overly trusting personality comes across well with nicely-written dialogue, and Long John Silver is as smooth talking as he is slightly sinister. The rest of the cast, including friend and potential love interest Antoinette (a new addition not in the original story), Dr Livesey and the prostitutes of Bristol, and of course a diverse band of pirates, vary in voice acting quality. They also generally seem a little on the one-dimensional side, lacking much in the way of distinctive personalities. Close-up facial expressions aren’t always realistic and the lip-synching rarely matches the spoken dialogue, either, which can make the characters come across more as props than real people. Even the animation is a little strange: when standing still people frequently change poses or perform hand gestures, but instead of making them more lifelike, it just seems forced and out of place. 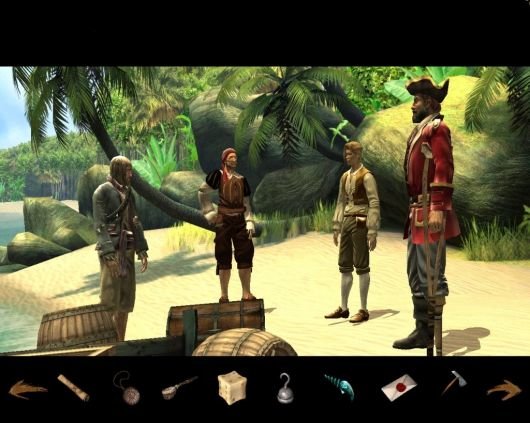 Only a handful of central locations are visited throughout the game, including the town of Bristol, the Hispaniola, and the fabled island itself, yet the attention to detail is quite appropriate in each. While perhaps not technically impressive, the docks of Bristol look suitably authentic for a town from the 19th century, and everything from the cobbled stones to building paintwork is nicely created to invoke a sense of texture. In a couple of seafaring scenes, the sunset looks incredibly realistic, with light reflecting beautifully off the ocean and moving in a natural way. There is even a terrific storm segment on the Hispaniola, where Jim has to make his way from one end of the ship to another while gale-force winds blow water spectacularly onto the deck, providing a genuine sense of being stuck at sea and fighting the elements. The ship itself features many little touches: kitchen utensils hang in the galley and barrels of rum are scattered below deck, while the sails and rigging are suitably impressive in scale.

Although the visuals have a slightly stylized, almost cartoon-like appearance, it's the little details that ensure the environments feel true to the story and its era. Treasure Island itself is ordinary in appearance, looking very much like any other tropical island you’ve seen, yet such an exotic location has its own inherent appeal, with some lovely sandy beaches and treacherous swamps to explore. There is never any actual threat of death (either here or elsewhere in the game), allowing you to travel around and experiment freely. Despite the presence of some huts and a gravesite, the island is deserted with the exception of a single shipwrecked character who, while a little mentally unbalanced, proves to be a great help.

Throughout much of the adventure, orchestral music provides a soothing background. The soundtrack is often subtle but typically suits the location at hand, becoming more lively during scenes of tension. Yet the developers knew when to stop it completely in favour of convincing ambient sound effects: tweeting birds and other wild animal noises accompany your exploration of the island, and the sounds of the sea are almost hypnotic in setting a tranquil mood during the quieter moments. 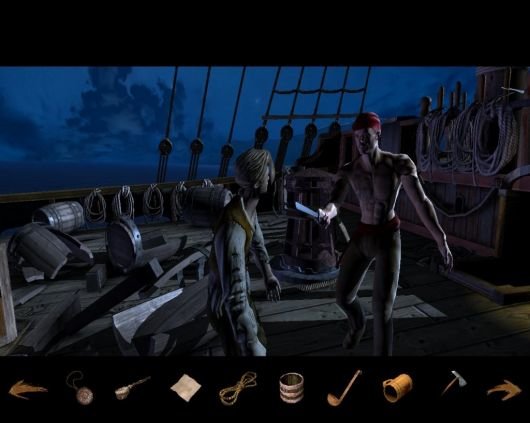 Control of Jim Hawkins is quite simple, using just the two mouse buttons to play. The cursor changes when it is possible to either use an item or talk to another character, and one mouse button carries out the action while the other provides some sort of commentary. A simple mouse click also makes Jim move, while double-clicking enables him to run or leave the current area instantly. Unfortunately, the controls don’t always function as intuitively as they should. Jim won’t walk where you want him to unless you locate the footprint cursor, so you can be clicking for him to move to a seemingly viable spot and yet the game will not recognise the command. This is especially apparent when walking across the Hispaniola and certain areas of Treasure Island.

Puzzles are primarily inventory-based, with a timed sequence and two mazes mixed in. Characters often need certain items given to them before they will help out, and some objects must be combined with others to become of use. There are a few observational puzzles in Bristol as well, where posters of ships and famous pirates need to be read in order to solve a test. Whatever the type, all the puzzles are straightforward and quite easy to solve, never proving very demanding. Adding to its simplicity is the game’s linear structure, as you can’t leave a major location until the puzzles for that area have been solved. The timed sequence that takes place during the storm scene can be a little tricky at first, but you are given unlimited attempts to get it right, merely restarting at the beginning if you get it wrong. Fast reflexes are not required, as it’s merely a matter of making the right decision at the correct time. The two mazes I ended up solving fairly easily through trial and error, but there are logical clues laid out for those who want to actually work through the process.

One thing worth mentioning, as it may not be totally clear at the start of the game, is that you should agree to receive help when asked by the pirate who greets you. Doing so will activate the hotspot highlight function, which is accessed by pressing the space bar during the game and reveals items on screen that can be interacted with in some way. Without it, you’ll be doing a lot of pixel hunting, as some of the objects are very small and easy to miss. As the game (at least the North American version used for review) doesn’t even have an on-disc manual or basic control list, this option is never explained and is something I discovered only by accident. 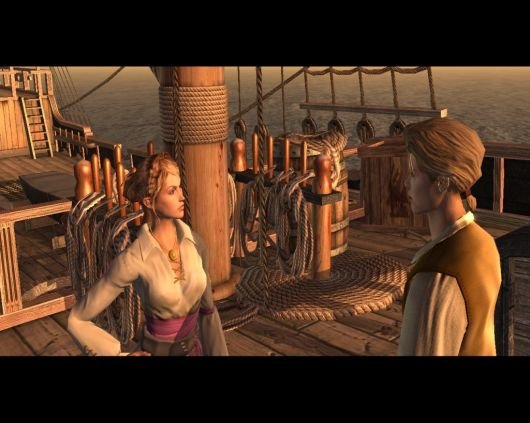 If there’s one main complaint about Treasure Island, it’s that although the puzzles are logical and enjoyable enough to solve, the gameplay never really ventures into any exciting territory. Given the rich source material of pirates and double-crosses and undiscovered treasure, it’s a shame the game never uses it more to the player’s advantage by being more eventful. Many of the tasks simply involve Jim fetching and carrying for other characters, and recruiting pirates is just a question of tricking them into agreeing to help you on your quest. Even the pirate mutiny merely involves Jim Hawkins being taken to Treasure Island, where you then must find your way back aboard the ship to free Antoinette from the cabin where she is held prisoner. At no point does the confrontation between Jim and the pirates ever become threatening, which makes the overall adventure feel a bit lacking in any kind of tension. The storm sequence is about the only event that provides a gripping moment, but this is never really expanded upon.

Though it doesn’t measure up to the quality of the original tale, however, Treasure Island (the game) is still a reasonably solid effort that remains true to the plot of the novel and has an entertaining (if somewhat easy) selection of puzzles throughout its eight or so hour duration. With its authentic looking visuals and a timeless classic behind it, there’s probably enough here to satisfy anyone looking for a serious pirate-themed offering, though it’s a bit too light on actual swashbuckling adventure to ever really impress. Despite its numerous shortcomings, I found it an enjoyable game to play from start to finish. It’s never as exciting as it could be, and it won’t set the pulse racing like a high seas adventure probably should, but this interactive trip to Treasure Island is still a journey many will find worth sailing.

Treasure Island isn’t as good as the source material that inspired it, but offers enough pleasant discoveries that pirate fans should find worth the journey.

GAME INFO Treasure Island is an adventure game by Radon Labs released in 2009 for PC. It has a Illustrated realism style and is played in a Third-Person perspective.

What our readers think of Treasure Island