If there’s one thing many adventure games lack, it’s any actual adventure. Scrounging for clues, collecting inventory, and solving puzzles, yes... Adventure, no. Lost Horizon aims to correct that in a big way. I recently had the chance to play through the first two lengthy chapters of the new game from Animation Arts, and already I can state emphatically that the developers have succeeded in their goal. So far I’ve been punched out, nearly drowned, shot at, dragged from a car in the middle of a high-speed chase, gunned down in a one-sided high-altitude dogfight, gas bombed, and suffered the slings and arrows of my feisty female cohort. Oh, and along the way, I also scrounged for clues, collected inventory, and solved puzzles. Whew!

All this may sound more like “action” than adventure from a genre standpoint, but if that thought gives you heart palpitations, rest assured that Lost Horizon is a traditional adventure through and through. The name Animation Arts may not ring a bell, but the Secret Files series surely will. While this game is unrelated to those titles, it shares more than a few similarities with the studio’s previous offerings, including its compelling use of action as a backdrop, a host of exotic locales, a touch of humour, and a little outside-the-box thinking in a race to uncover the truth behind an ancient legendary secret.

You won’t be thinking “Secret Files” when you begin playing, however. At first glance (and likely the second and third), the words that will instantly spring to mind are “Indiana Jones”. Minus the whip and fedora, you could run down a checklist of all the common elements shared with the popular movie franchise. Set in 1936: check. Nazis looking for fabled treasure of untold power: yep. Scruffy scoundrel protagonist: absolutely. Route-tracing travel map: right here. Plane crashes and wintry Himalayan mountains: present and accounted for. Throw in a live introductory musical number in a Hong Kong night club, a cheeky Oriental kid, and an abnormally magnetic artifact, and this game could practically be called Raiders of the Lost Horizon.

This isn’t a criticism. For one thing, coming from someone who counts Raiders as one of his favourite movies of all time, I totally support the choice. Every game has influences, so why not choose from the best? The game even comically acknowledges its inspiration in one blatant moment of parody. But more importantly, once you strip away all the surface similarities, Lost Horizon is no clone, no cheap rip-off. Just as Indiana’s adventures were based on old film serials of the ‘30s and ‘40s, this game also takes a familiar formula and gives it a distinctive, enjoyable personality. Before long, you’ll soon come to embrace this game on its own merits.

Lost Horizon stars pilot and smuggler-with-a-heart-of-gold Fenton Paddock, whose carefree life of boozing and womanizing is first disrupted by triad thugs who want him dead, and later by an appeal to lead a rescue mission in the Tibetan mountains to find his missing British military buddy. Paddock makes a likeable lead, proving just enough of a self-proclaimed “sarcastic bastard” to give him an amusing edge. It’s clear there’s more to him than meets the eye, however, as hints are continually dropped about his mysterious army history that led to his current circumstances. 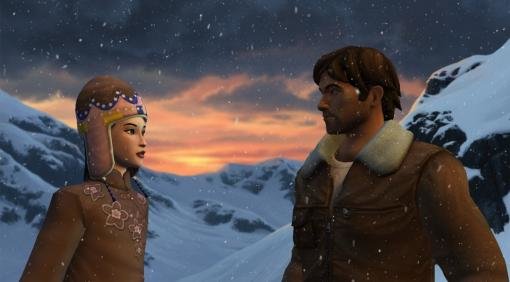 Fenton soon meets his match in the lovely Kim, a sassy young Asian woman he’s determined to “protect”, though Paddock has a tendency to draw her ever deeper into trouble, and he is frequently the one who needs a helping hand. Kim was briefly playable in the chapters I played, but only in a very limited role, largely to acquire items to bail Fenton out of his latest predicament. I do hope she’ll get a larger role as the game progresses. When together, the two protagonists generally bicker, but it’s never mean-spirited, and presumably conceals a real affection for each other.

Unfortunately for Fenton and Kim, their mission takes them unwittingly into the path of the Nazis, who are determined to discover the secret entrance to Shambhala before anyone else. As a result, many of our heroes’ obstacles in the early going involve avoiding or escaping man-made dangers as they sneak through a German army camp, outwit a hungry Doberman, and fend off a Messerschmitt with only their unarmed cargo plane. Of course, in an adventure game, “cargo” means “stuff you can collect and combine”, and in Lost Horizon, that’s exactly what you’ll spend much of your time doing.

If there was one main flaw of the Secret Files games, it’s that some of the inventory puzzles had completely ridiculous solutions. Thankfully, Lost Horizon eases back the absurdity throttle to a manageable degree, and many dilemmas here are reasonably clued and follow very logical sequences. There are still some puzzles that will have you scratching your head, but since each location contains only a handful of screens and the number of interactive objects is moderate, you won’t stay stumped for long, even if you have to resort to trial-and-error at times. The odd pixel hunt might have tripped me up once or twice, but any concern of that is quickly erased with the hotspot highlighter. 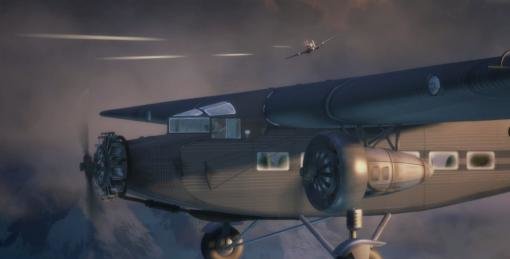 While most of the puzzles I encountered were inventory-based, there was also a dialogue sequencing puzzle and a couple of standalone logic challenges, including a tangled wire connection puzzle and a double-sided jigsaw. Switching to first-person view, the logic puzzles prompted something I’ve never encountered in an adventure game before: two difficulty options for that puzzle alone. It’s a little jarring to have something so “gamey” thrust at you suddenly, but it’s a creative way to let players pick-and-choose their own settings on the fly instead of being stuck with one difficulty level for the entire game.

The point-and-click interface is quite traditional for interaction and movement, and it includes some of the most user-friendly features available. The cursor is a mouse representation that highlights whether you can use or just look at an object (with left or right clicks), which is great for avoiding all those useless failed inventory combinations other games require. Getting around is just as easy, as Lost Horizon uses the why-doesn’t-every-game-do-this? method of walking to nearby spots and running to distant ones. Double-clicking on exits will automatically take you to the next room or quick travel map screen, though screens do scroll so it’s important to explore thoroughly.

In the first two chapters alone, I admired the rich blues of a scenic harbour (both above and below water level – glub glub), the gold and red-accented, dragon-themed streets of Hong Kong (painfully up close and personal on several occasions), and a snowy mountainside, warmed only by the heat of smouldering plane wreckage. Not recommended for tourists, but great for adventurers! Visually, the game doesn’t have that same jaw-dropping appeal that the original Secret Files did, but Lost Horizon is still a nice-looking game. Better yet, as you might expect from a developer named Animation Arts, there’s a healthy sprinkling of ambient and character animations throughout. 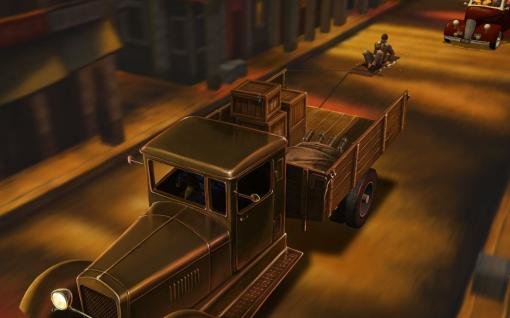 Most of us cringe when it comes to localization issues, but Lost Horizon sounds even better than it looks. The Hong Kong accents won’t fool anyone, but fortunately they’re understated rather than the exaggerated mangring… I mean, mangling we usually get from Eastern characters. Paddock’s subtle English accent suits him perfectly, and the acting performances are solid all around. Playing subtly in the background is a terrific soundtrack that changes significantly to suit each new location, and the sound effects are noteworthy for the attention paid to detail. I delighted in hearing the crunching of snow underfoot switch seamlessly to wood or metal as Paddock reached a new surface. Heck, the sound effects are almost TOO realistic. When Fenton steps into his bathroom to relieve himself, you’ll feel like you should excuse yourself instead of continuing to listen in.

Obviously I can’t say for sure that there will be no drop-off in quality for the rest of the game, but barring that unlikely event, I can genuinely say that Lost Horizon looks like a surefire winner. If you liked the Secret Files games, you can’t go wrong here, and even if you were turned off by illogical puzzles in those titles, you’ll find a much better balance this time around. And if you’re just someone who wants some actual adventuring in your adventure games, look no further than Lost Horizon. Its release, thankfully, isn’t lost on the horizon at all, as the game is currently scheduled for release in the UK late next month.

baz55
just finished the demo....always late me!! pre-ordered immediately...only a few days to go....loved it! i have never done a complete adventure game without a walkthrough and i wont with this either; some good puzzles so far; excellent screens and dialogue in my opinion buy and enjoy

Sho
Thanks so much, that's indeed just what I was looking for!

Gimpstarr
If you're interested in the voice you should check out this: http://tinyurl.com/2vy5nem

Sho
I really liked Nina's voice in Secret Files 2 - however, I played the original German version. I'm kind of conflicted which version to consider the original this time around, though ... I wonder if Animation Arts starts with German or with English texts at this point, or does everything simultaneously right off the bat, or what. The reason I wonder is that I've seen very little coverage of this game in the German media, only in English media, and unlike with the Secret Files games, where the English localizations were released months after the German versions, both versions seem to be debuting simultaneously this time. I always prefer to play the original - be that English or German - so I wonder if AG could reach out to AA and prod them for an answer :).

Jackal
Beyond a few vaguely similar themes, not as far as I know.

chad5871
Does this game have anything to do with the classic novel of the same title?

Jackal
Kim's great. I really liked her, and the voice actress does a fine job. Accent's probably a little light, but that just makes you forget she's Asian.

Lee in Limbo
I think the only thing that makes me leery of trying another animation Arts game is that they gave us such unbearable lead actress voice over in the second Secret Files game. Still, as long as Kim is never as annoying as Nina, I'm sure I'll enjoy this game.
Advertisement
archived preview