Review for Tales of Monkey Island: Chapter 1 - Launch of the Screaming Narwhal

Tales of Monkey Island: Chapter 1 – Launch of the Screaming Narwhal  (2009)

I remember the palpable excitement when Telltale's Sam & Max: Season One was announced--as though the crushing weight of the dashed hopes of an entire genre had been lifted. I also remember distinctly the feeling when the review copy for that first game came out, and how years of repressed point-and-click cartoon adventure love came rushing out of me, like a rediscovery of my childhood. Those were magical times.

These are different times now--though don't mistake me, the announcement that Telltale Games had taken perhaps the most sacred and beloved adventure gaming franchise (one thought to be dead for certain) and licensed it from LucasArts for new episodes was met with delighted surprise by me, and every other fan who grew up with these games--because we all played Monkey Island and we all have favorite dialogue lines and we all can discuss our favorite and least favorite puzzles from the series, and we all can recognize the myriad inside jokes in other games that the series generated. The lore of MI is a part of our adventure gaming culture. Add to that the fact that Telltale has become an unquestioned torch-bearer of the genre by spending the last two years producing quality adventure games, constantly raising the bar of expectations to the point where simple fan-service is no longer good enough, and the pressure to create an instant classic with each release is much more intense--so you can start to understand why Tales of Monkey Island: Launch of the Screaming Narwhal is a good, but moderately underwhelming game.

Narwhal, the first episode of what promises to be a five-part monthly downloadable series, opens with a classic MI-style confrontation in which Guybrush clumsily fumbles about attempting to save his lovely bride Elaine from the dreaded undead pirate LeChuck--and in the process puts into motion a terrible chain of events that sets up the forthcoming adventure, beginning with the first episode in which our hero finds himself washed up on Flotsam Island--a mysterious place where crushing winds seem to prevent any hope of sailing away and saving your love. Getting off of Flotsam, and learning about the mysterious item needed to defeat LeChuck once and for all (or at least until the next iteration), are the primary goals in this first episode. 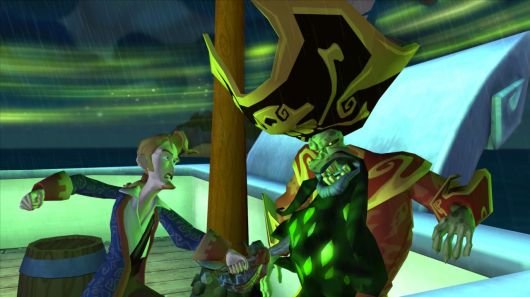 All of this is handled with the requisite touch of humor--mostly of the family-friendly, only-semi-dark variety. The writing, by former LucasArts veteran Mike Stemmle, is reminiscent of the slightly safer, tame variety that characterized the first half of Sam & Max’s initial season. The biting, droll sarcasm of Monkey Island 2 is mostly absent, and thus the brand of humor is more along the lines of "nice smiles" than loud laughter and a lot of pretty obvious puns. The new supporting characters introduced are mainly pirates with distinctly un-pirate-like quirks who are mostly forgettable--the one exception is a sadistic island doctor with a powdered wig, lipstick, and a thirst for amputation, and he is almost frighteningly creepy and fails to be very funny in the process. Besides the main three stars, the game does feature the return of a familiar supporting character who has most of the episode's best lines (and who will apparently play a very important part in the season's story arc), but most of the new character and location content created for this episode doesn't seem to have much staying power.

As is almost guaranteed with a Telltale game, the graphics and sound elements are top notch. The characters can be a bit angular and shiny, but Narwhal is a beautiful, colorful game with diversity in the design of the various town buildings and some exceptionally animated visual gags. The voice work is very good, particularly the welcomed return of Dominic Armato as Guybrush Threepwood. There is not much opportunity for the music to shine on its own, the way that it often did in the Sam & Max series, but what is offered always seems appropriate and frames the Caribbean environment very well. The consistency of Telltale's technical excellence in these areas continues to amaze.

If you are prepared for a game that carries over the same familiar mechanics from Sam & Max, however, be ready to re-learn how to control an adventure game, because Telltale--rather curiously, in this writer's opinion--has decided to take a shot at reinventing the navigation wheel. Pointing and clicking will still be a necessary part of the adventure (as it's the only way to interact with objects) but all the clicking in the world won't send Guybrush anywhere. Instead, you are asked to click and hold on Guybrush, and then drag the cursor on the screen in the direction you want him to walk--as though he himself were the analog stick on a gamepad. It's an interesting idea in concept, and will surely please the vocal mouse-only crowd of adventure fans, but it’s one that I never got comfortable with. Thankfully, WASD and arrow key support are offered as alternatives, which I very quickly switched to. This isn’t the first Telltale series to make this switch, as Wallace & Gromit’s Grand Adventures has also gone the direct control route, but I have trouble seeing what the benefit of this type of navigation overhaul is when pointing and clicking, however simple and traditional, has served games like Sam & Max so well. I also would have been happy to use a gamepad if full support was implemented, but the lack of object interaction with the gamepad here is another bizarre element of the interface decision. 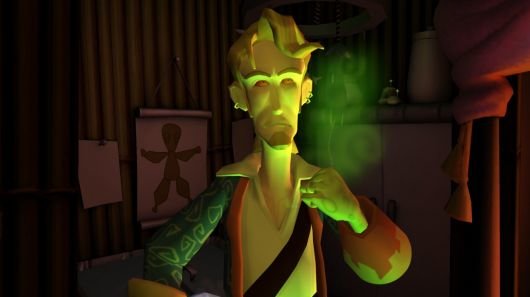 To be fair, the interface left a bad taste in my mouth that was difficult to overcome following a prologue sequence on Guybrush's boat that, while essential and entertaining purely from a story perspective, combines the frustrating new interface with absolutely awful camerawork to create a very difficult introductory experience. Re-learning how to make Guybrush walk somewhere, only to have the camera violently careen all about the boat, which itself is rocking halfway up and down the screen as you are constantly attempting to click on one small hotspot that's jerking about and changing positions, is not the most endearing way to be reintroduced to these characters. I was breathlessly grateful when the prologue had ended and I was back on solid ground where the camera could remain relatively steady and the hotspots were certain to not be rolling all about as I attempted to click them. 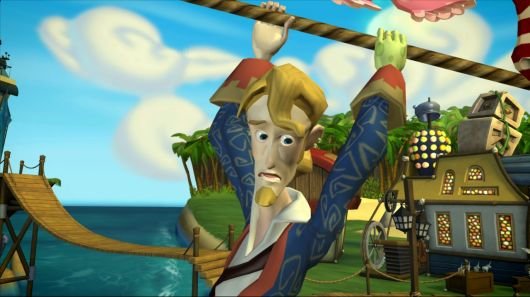 Complaints about the camerawork in places (and it is occasionally an issue in other areas where Guybrush fills so much of the screen, it is hard to stay properly oriented) and the interface implementation are symptomatic of the general feeling that there are components of the game that were a bit rushed. While surely in production far longer, this game was just announced to the general public last month, and the hurried development schedule was evident at times in the form of many small graphical or navigational glitches, and even a few crashes at startup. Though Telltale has been continuing to refine the game before public launch, promising that any major issues will be fixed prior to final release, these types of problems are unusual for Telltale--a company that has perfected the consistency of episodic gaming, maybe to their own detriment as they are now going to feel a great deal of pressure to stay committed to their monthly game schedule, bugs or no bugs.

One thing that Narwhal does very well is create a feeling of value. The playing time for me clocked in at over three and a half hours. Now to be certain, that comes with the caveat that I'm not the sharpest knife in the drawer and have never been particularly good at adventure games, so I probably took my unnecessary sweet time solving some of the harder puzzles, but overall, the puzzle difficulty has a very healthy balance if you are able to step back from the trees and see the forest (so to speak). There are a couple particularly good map-navigation puzzles--just one example of many very direct, and mostly very amusing, homages to Secret of Monkey Island. You will find your character loaded up with a healthy quantity of inventory items during the game, some that have a use that will take quite a while to discover, particularly since they occasionally need to be combined with others first. With the number of distinct "stages" present, as well as a far more substantial number of area environments than any Sam & Max game, Chapter 1 unequivocally succeeds at feeling like a meaty and substantial episode in its own right, not merely a prelude of more to come.

Dare I say that adventure gamers are getting spoiled when we can take a gift horse like the return of such a beloved franchise and look it squarely in the mouth and point out its flaws. Yet despite being a flawed game with some questionable interface and camera decisions, and never consistently elevating the writing to a standout level, the first Tales of Monkey Island game demonstrates tremendous potential for this series to grow into the level of excellence that Sam & Max eventually reached. And if it seems like this review is loaded with comparisons to the dog and rabbit, it's because Telltale used them to set the bar for excellence with those games--and still has all the talent and resources in the world to attain those heights again. In anticipation of that potential, every adventure fan should consider this an essential play, and go into it with the understanding that this is a very good and very fun game—just not the best Telltale has to offer.

WHERE CAN I DOWNLOAD Tales of Monkey Island: Chapter 1 – Launch of the Screaming Narwhal

Tales of Monkey Island: Chapter 1 – Launch of the Screaming Narwhal is available at:

Can you really complain about the return of Guybrush? Well, yes, but this is still a fun and beautiful pirate adventure that should make any fan excited for what Telltale has in store for the rest of this series.

GAME INFO Tales of Monkey Island: Chapter 1 – Launch of the Screaming Narwhal is an adventure game by Telltale Games released in 2009 for iPad, iPhone, PC and Wii. It has a Stylized art style, presented in Realtime 3D and is played in a Third-Person perspective. 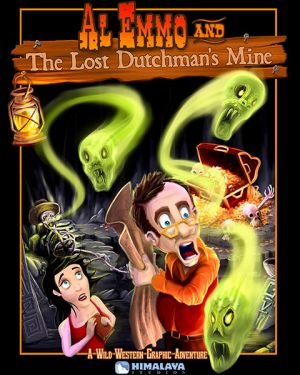 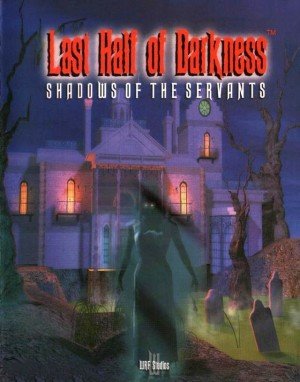 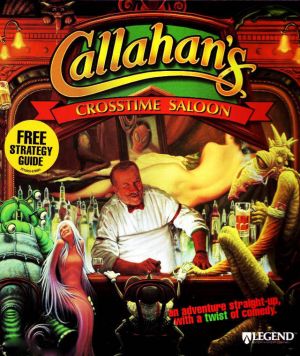 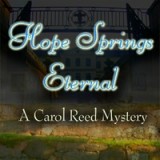