We get a small commission from any books sold.
All Bitmap Books
Written by
Berian Morgan Williams — March 21, 2005

Ben Jordan: Paranormal Investigator -- Case 4: Horror at Number 50 is, as the lengthy title suggests, the fourth game (of a planned nine) in a series. The first game was reviewed by Adventure Gamers, and the series has come on in leaps and bounds since that short debut episode.

Horror at Number 50 is set entirely in an antique bookshop in London. In the 19th century, a pair of sailors broke into the bookshop (then only an abandoned residential house) in search of a place to sleep. They were set upon by "The Horror", and one sailor was killed. The other lived to tell the tale, but the house continued to be occupied despite its evil presence. Fast forward to modern day, and the house is now a bookstore, being plagued once again by The Horror. Our hero, paranormal expert Ben Jordan, is called upon to help battle the ghostly Horror. To guarantee success, the store owner has brought in more than just Ben alone -- he has assembled a group of five paranormal experts of various fields and experience. Together they must spend several days and nights in the bookstore (which fortunately features five bedrooms) until the case is solved.

The game features a Sierra-style interface, with the usual walk, look and interact cursors, but with separate cursors for general chit chat and asking questions. Chatting will run through a few lines of pleasantries, while asking questions brings up a sub-menu with topics to pick from. During dialogues, a portrait of the character you're speaking to is shown, a la Gabriel Knight: Sins of the Fathers and Quest for Glory IV. A slight modification to Sierra’s style is the addition of a LucasArts-style status line, which displays the name of hotspots as you pass the cursor over them. 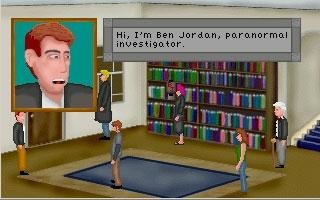 The story of Episode 4 is simple: the ghost hunters come to the house to combat the Horror until it is vanquished. However, the game is focused more around the characterisation and puzzles than the plot. Each of the characters in the game is very different, with varied experience and attitudes. One is a quiet, introverted German who only presents his opinion on a subject if asked. Another is an elderly, dramatic, over-the-top medium who makes frequent "psychic predictions" and passes judgement on all matters. All of the house guests are well-rounded characters, with their own agendas and distinct characteristics. It's hard not to come to care for them somewhat, and be worried when they are put in danger. The "danger" is mostly atmospheric -- Ben himself cannot die in the game -- but there are a number of close calls and strange happenings. One of the other ghost hunters in the house is a female Harvard student of a similar age to Ben, and the two become quite close during the course of the game. A future reappearance as Ben's love interest seems a likely bet.

Puzzles are largely inventory-based and logical, but being set entirely in one small house, the game relies quite heavily on triggered events. Sometimes it's necessary to wander around, talking to everyone and interacting with everything in order to progress the story. For the most part, though, puzzles are well-designed and fairly simple to solve. They don't do much to slow the pace of the story, and it should be possible to complete the game in an hour or so. 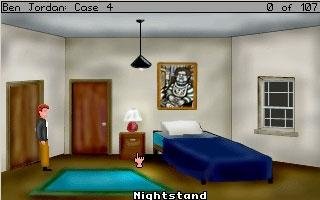 Graphics are of the 'functional, not beautiful' variety, but are by no means ugly -- they're clear and straightforward. Backgrounds and characters both look pleasant enough, and show as much detail as is needed. Character portraits are also nicely drawn. There are occasional animations, such as people sitting down and standing up, doors opening and closing, and so on. This is a nice touch, and one so often missing from amateur adventures, where the designers would rather save the time and effort required to create extra animations.

As always in the Ben Jordan games, the soundtrack, composed by Andreas "Ghormak" Slotte, is excellent. Almost every location and event has an appropriate tune playing, with increased tempos for dramatic moments. The sound effects, by Adam "Dark Stalkey" Hay, are of a high standard, too. There are effects for almost every event, like knocking on doors, cars passing, and doors opening. Especially effective are the sounds in the intro, in which we are shown the events that transpired in the house in the past -- dogs bark in the otherwise quiet night, and a blood-curdling scream plays as the sailor is thrown to his death from a top-storey window, impaled on a fence post with a sickening splat.

Overall, Case 4: Horror at Number 50 is a great game, which improves in almost every way on the previous entries in the series. If the episodes continue to evolve in this way, the future Ben Jordan titles promise to be well worth playing.

Ben Jordan: Paranormal Investigator -- Case 4: Horror at Number 50 and the other Ben Jordan games can be downloaded here.

What our readers think of Ben Jordan: Paranormal Investigator - Case 4