Repeat after me: "Casual gamers are people too."

Okay, now that I got that out of my system…

After my excitement that Jane Jensen was working on a new adventure title, and subsequent despair when that game was put on hold while she went into the casual gaming market, I swore I wouldn't touch a casual game as long as I lived. I don't like Minesweeper, anyway, and if I want to play poker I can always load up a Police Quest or Leisure Suit Larry save right before the hand is dealt. But when I came across The Witch's Yarn, a new downloadable game from indie developer Mousechief, my resolve went out the window. The developer calls The Witch's Yarn a traditional adventure that has been "re-invented" for the casual gaming market. In a note to experienced adventure gamers, the developer says that The Witch's Yarn "isn't a run around, grab everything, and then apply all possible combinations to succeed kind of game." Instead, Mousechief says, it's an example of "what the future of adventure could be like." This ambitious suggestion, along with the game's premise, drew me in. 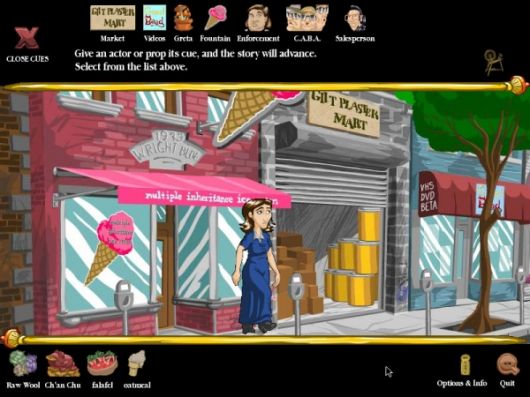 The Witch's Yarn centers around Wednesday Brooks, a recently widowed witch who has just opened a yarn store with a vow not to mix magic and business—much to her family's disapproval. The game is divided into eight chapters, each with a slightly different focus and set of obstacles for Wednesday to overcome during her first day on the job. 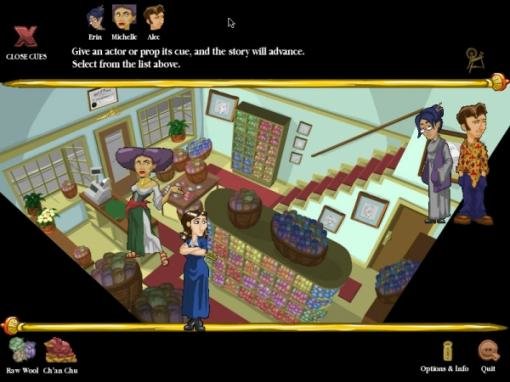 And there are plenty of obstacles. Seems like no one (except for Greta, Wednesday's enchanted mushroom sidekick) wants the poor witch to catch a break. The unrest starts with Angelica, Wednesday's overbearing mother, who scorns her daughter's decision to open a shop in the mortal world, and will use any magic necessary to bring about its failure. A number of other NPCs join the fray, including Wednesday's three children, the squabbling owners of neighboring Cherokee Avenue shops, and various mischievous witches who pop in and out as part of Angelica's plan to ruin her daughter's business. Each character has complex interpersonal relationships with several of the others—just as in real life. This large network of characters is one of the game's strengths, and the conflicts that arise among them drive the story forward. 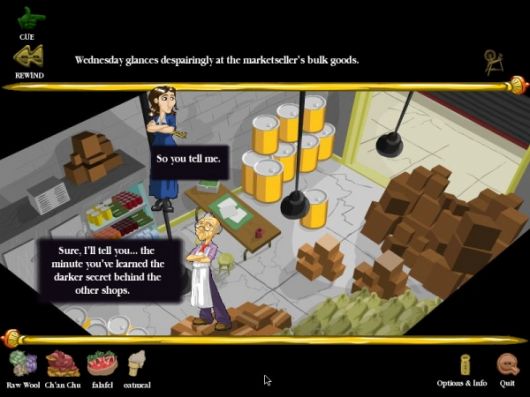 In spite of its narrative structure, The Witch's Yarn plays much differently than other games out there, which serves as a constant reminder that this is not an adventure as we know it. The characters are static images overlaid on nicely-drawn backdrops. All in all the game has about twelve locations, but the vast majority of time is spent inside Wednesday's yarn store. There is no animation, but the characters sometimes change slightly in facial expression and body language. Jazz music plays continuously, often shifting to reflect a new character's entrance or a change in Wednesday's mood.

As the game opens, the player assumes a role similar to the director of a play, responsible for deciding how the scenes will unfold. This is done by selecting icons (the game calls them "cues") from a list at the top of the screen. The list is usually comprised of various characters, who appear when cued and speak in text boxes on the screen (no voice acting). After watching the results of a cue, you select another from the list to continue the story. The list of available cues changes based on what you did last, so not all choices are available all the time. As the director, you get to cue each event in the story, but you have no control over the result. This can become frustrating, because the game's main challenge is to pick cues that lead to a certain outcome. (For example, one conversation must leave Wednesday feeling happy, not depressed, or she'll decide to shut down the yarn store.) But when you select a cue, there's no indication of how it will pan out. Instead, the entire process is one of trial and error, as you must select from the list you're given, watch the cues unfold, and if they don't achieve the goal, rewind and cue them again in a different order. This pattern just about sums up The Witch's Yarn's gameplay: cue, click through dialogue, cue, hit dead end. Rewind and repeat. 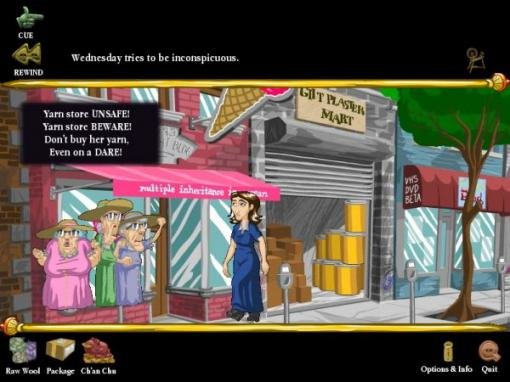 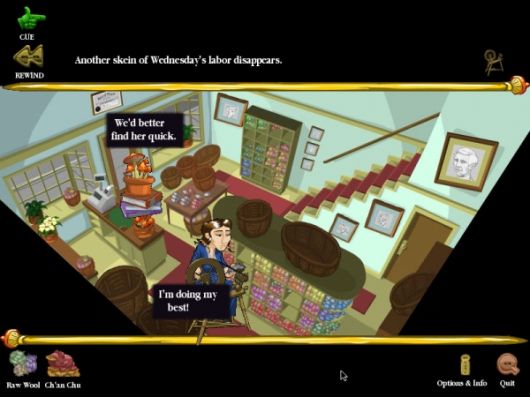 From time to time, one of the characters gives Wednesday an object, which is then displayed in her inventory at the bottom of the screen. However, she doesn't have the freedom to use these items at will. Like everything else in this game, inventory items can only be selected when they appear in the list of cues. As promised, this system does away with the common routine of trying every inventory item on every hotspot to find a working combination, but it also takes yet another level of control away from the player—that "a ha!" moment when you realize what needs to be done and that you just happen to be carrying the perfect item for the job. In several instances I was carrying something that seemed right for the situation, but since it didn't appear on the list of cues, I was restricted from trying to go down that path. Even if the item had turned out not to work in the way I wanted to use it, I still would have preferred being told "Sorry, that can't be used here," than for the option to be removed altogether.

Ultimately, by optimizing the game for so-called casual gamers—people who, according to the developer's press release, are "unable to perform basic activities found in traditional adventures"—Mousechief has stripped away many of the elements adventure gamers will be looking for. I say "stripped away" because The Witch's Yarn feels to me like a project that started out as a complete adventure game and was later scaled back. The game has a unique premise, a well-rounded cast with believable, conflicted relationships, and a developed plot that provides the perfect framework for a quest-style story. The stylized cartoon characters are just begging for the freedom of a full-fledged adventure. A cache of inventory items are ready to be collected and used, neighboring shops are open for exploration, and at least two dozen NPCs with hundreds of lines of dialogue are waiting in the wings. But with its static, cue-driven gameplay, The Witch's Yarn plays instead like a storyboard of what might have been.

The game's save system (or lack thereof) is another aspect that has been simplified for the target audience. You can't save games in The Witch's Yarn. Instead, a "bookmark" is placed where you stop playing. The next time you load the game, you have the option of starting from that point or starting over from the beginning (in which case your bookmark is lost). It's similar to the system used in some of Sierra's games, such as King's Quest 7, except with Sierra's system you could at least have multiple games going at a time, and could start at the beginning of any chapter. The Witch's Yarn's bookmark system streamlines the traditional adventure game interface to some extent, and may be a plus for casual gamers who don't have "save early, save often" pulsing through their veins, but it complicates what could otherwise have been one of the game's fortes—replayability. Depending on the order in which you select cues, The Witch's Yarn offers diverging paths and outcomes, but the lack of a save system makes it difficult (and less desirable) to explore these possibilities.

What our readers think of The Witch’s Yarn