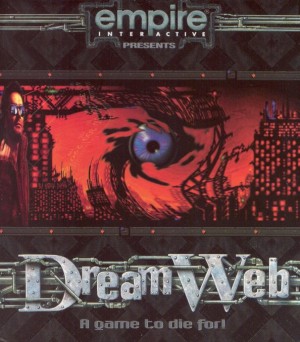 We get a small commission from any books sold.
Written by
Austin Boosinger — May 23, 2008

There’s something about cyberpunk that I just can’t resist. While realistically frightening in the Orwellian sense, these fictional worlds contain a more stylish brand of horror—often dousing the city-lit atmosphere with rain and fog and shadowy, phantasmagoric darkness. And strangely, as gloomy and bleak as this world is, I’ve fallen in love with it. Truth is, I kind of want to live in it. It’s dreamy, in its own little way. The half-working technology makes for a hodge-podge mixture of new and old, and everyone and everything always looks so… cool. So, what better way to inhabit such a fictional world than an immersive adventure game? This is where I hoped DreamWeb would come in. Unfortunately, it’s hardly impressive, hardly immersive, and never fun.

DreamWeb isn’t known for having a very light tone. At the time of its release, it received some flak for being one of the first mainstream “adult” games. But those looking for something risqué may be highly disappointed. Whether it’s the infamous pixel-blurry sex scene, the PG-tame dialogue or the cartoonish head explosions, it’s all just plain silly, especially compared to the adult fare in modern gaming.

The story is a little silly, as well. From the get-go, it’s obvious that the developers liked the film Blade Runner. A lot. Practically everything about DreamWeb's style is heavily borrowed from it, down to the opening credits and soundtrack. But there aren’t any similarities in story, aside from a noir feel. Whereas Blade Runner's plot had deep themes running throughout—both philosophical and religious—DreamWeb falls short of anything beyond a contrived premise involving murdering people to save the universe. 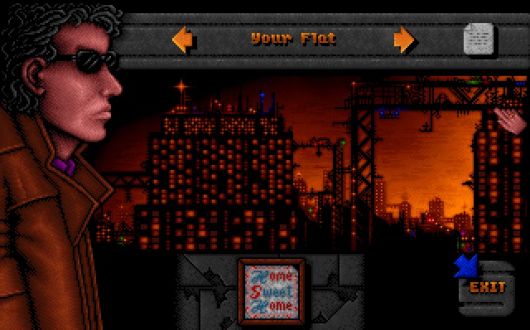 Before more plot is revealed, however, you’re first invited to read the protagonist's very own diary which comes with the game. This is a fantastic idea, and I can’t think of a better introduction to a protagonist's mind. If only it worked. The 43-page handwritten diary, entitled "Diary of a (Mad?)man", reads mostly like a junior high journal assignment, and a fake one at that. Even the “mistakes”—the carefully crossed out words—seem too tidy and planned to make for a real journal entry. Still, although its sole purpose is ultimately a copy protection ploy, it does end up being the closest you’ll get to some flavor and personality in the story. At times it’s enjoyable, and most importantly: human. Faults or no, at least this thing has feeling. Maybe it didn’t work too well here, but I’d love to see future adventure games incorporating something similar, as the in-hand literary accompaniment makes for an intimate segue into a new world.

I was surprised to find that the game itself holds a completely different feel than the diary. While the diary is personal and foreboding, the game is vacant and lacking in any personality whatsoever. The narrative is so shallow that characters are mostly described by their form of dress. And just when you think it’s climbing up into something with feeling, it totters along in the gutter with obvious, mundane remarks, and the “insanity” almost takes on a normative, robotic tone. The character from the journal, Ryan—he’s just your average, sleep-deprived twenty-something. He works at a bar, he’s got a girlfriend, and that’s all we really know. But dreams haven’t been too kind to him these days. Visions of murder are making him feel on edge. Ryan feels he needs to trust these visions in his nightmare, which lead to him killing evil people in high power. These evil people can somehow destroy something called the DreamWeb, which is a thought-world of sorts--something comparable to Jung's idea of a collective unconscious--though it's dark and cavernous and overseen by men in red robes. Ryan’s dreams involve potentially securing the future of this DreamWeb (and consequently, humanity) by murdering seven of the evil people in power.

But is he crazy? Do these dreams have something behind them? If these questions remained a mystery, the game may have had the advantage it needed with such a lackluster story. But it’s made pretty obvious by the game’s intro which direction the plot is taking, so forget about intrigue. All in all, we still end up knowing very little about this DreamWeb. It’s as if the folks at Creative Reality themselves knew very little, or maybe they were too hesitant to share. It’s safe to say that there are no underlying themes here, and we’re left with a hero-saves-the-day story with nothing underneath. Which is all fine and good, but it doesn’t work for this game, especially since it alludes to much, much more. 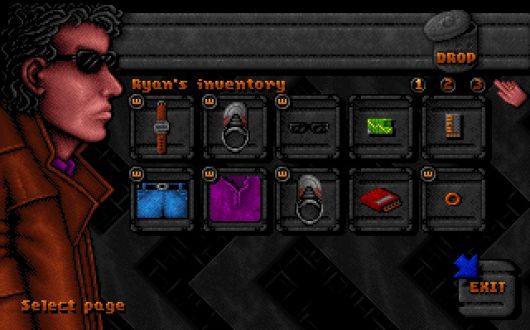 Visually, the game looks like more of a shrunken, butchered Super Nintendo game than the sleek, sexy cyberpunk noir game it could be. The game interface takes up about one quarter of the screen. As for the rest? To the left of the game, you’re “treated” with a somewhat horse-faced portrait of Ryan which never changes aside from the arbitrary action of equipping sunglasses early in the game. It’s truly irritating and distracting. I mean, really. Who wants to stare at that thing for hours on end? And if we’re forced to stare at it, can’t it do something once in a while? Maybe it can at least blink, flinch when Ryan gets hurt, or smile when something good happens? The portrait seems to be almost anti-innovation, standing still and lifeless throughout the entire mediocre game as if on strike for some unknown irrelevant cause.

Everything that appears on screen is cute, condensed, and simple, and it's presented from a top-down perspective which is unusual for adventures. But it’s hard to see—this compact world is annoyingly pixelated. And with a magnifying glass to help find items, the term ‘pixel-hunt’ could never be more apt. You’re more likely to watch below the viewing screen for the text descriptions than sort through much of the mess. And let me tell you, none of this comes anywhere near handy when dealing with the game’s puzzles. DreamWeb presents gamers with a mere handful of them, and they’re horribly designed and therefore frustratingly difficult. They aren’t clever in any sense, as they're completely intuitive and boringly logical, but picking up the pieces to the puzzle is no walk in the park.

The game allows you to pick up nearly every object, and though you have a limited inventory space, the freedom to do so is quite nice. You can opt to pick up, say, a highly important-looking document, or a cold green pea that’s been ripening near your bedside. However, you can’t always use all your items once you have them. In a move that may please beginners and frustrate pros, you can only use items with certain key objects or characters, making it all too easy to disregard what may be a correct piece of the puzzle. This allows for less experimentation, as many options can’t be explored just for kicks or interesting responses--nothing happens when you try. Even with the correct items in tow, you’re just not likely to have any fun with these simple puzzles. The only satisfaction to be had from them comes from the comical gratuitous violence. 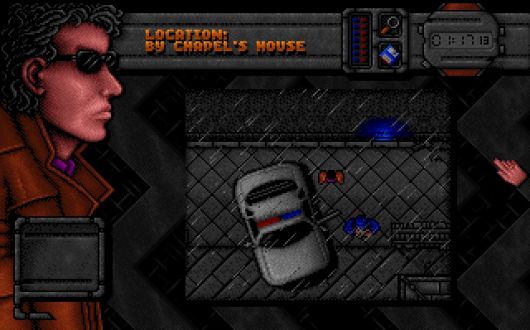 The game does little to create a believable environment. While the technology in a half-destroyed world is doomed to be inconsistent, there are a few things that seem too far out of place in DreamWeb. For example, the computers everyone uses run off of a basic DOS-like interface. With automatic doors and keypads in the most Low Rent of housing, it seems that the computers would at least be working on touch or voice-activated technology of some sort, even if the original floppy disk version of the game didn’t support voice (though a CD ‘talkie’ version was later released). There are also too many things we don’t know about the world, such as how Ryan travels. Simply clicking on an icon to travel doesn’t give much insight as to how the character got there. Freedom of movement is limited on foot—a click will only move your character if there is an object to interact with. And often times you’ll walk into a room that you may think you’ve been in before and see characters that look familiar, displaying the game's noticeable lack of sprites and backgrounds. In that sense, exploring new areas isn’t the most exciting endeavor.

On a positive note—at least in this case—the game is short, taking you only about two hours or so, and shorter if you use a walkthrough during one of the game’s brutal pixel-hunts. And the music, while repetitive and short and tinny—isn’t all that bad. Kind of fitting, in fact. It picks up from the ambient, new-agey Vangelis soundtrack from Blade Runner, though it’s less noir and more electro. Heavy rain downpour and thunder-strikes make up for the near-entirety of looped sound effects throughout, which surprisingly doesn’t get too old. Less dexterous gamers should note that there are a few areas requiring somewhat quick reflexes, with the possibility of death, though if these present any problem at all, it's likely to be only the first time you encounter them. Still, with that in mind you’ll need to save occasionally.

If you’re a fan of cyberpunk and looking for a good adventure to suit your tastes, play the brilliant Blade Runner, the charming and hilarious Tex Murphy series, or the classic (and now legally free) Beneath a Steel Sky. As for DreamWeb? It doesn’t really belong. It simply follows the credo of cliché, ending up as nothing more than a red herring itself, leaving gamers hunched down in the rain, pining for the story arc, atmosphere, and philosophical undertones that great sci-fi has to offer.

This game is only for the masochistic, the cyberpunk-obsessed, or the adventure game completist.

GAME INFO DreamWeb is an adventure game by Creative Reality released in 1994 for PC. It has a Illustrated realism style and is played in a perspective.