continue reading below
»   Home  /  Articles  / Features  / #6: Indiana Jones and the Fate of Atlantis

#6: Indiana Jones and the Fate of Atlantis

"Alright Jones, how you gonna find that statue in all this junk?"

After three successful (but rather mediocre) game adaptations of the Indiana Jones movies, LucasArts struck out on a new direction for the game informally referred to as "Indy4" and wrote a new original story centered around the famous Lost City of Atlantis. The story rivaled the stories of the blockbuster movies, and Indiana Jones and the Fate of Atlantis became one of the most fantastic adventure gaming experiences ever. 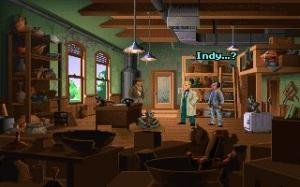 Fate of Atlantis is quite a departure from the LucasArts adventures of the early 90's, which were cuter on the surface and more reliant on cartoon graphics and humor. Although there's plenty of trademark Indiana Jones sarcastic humor within, the dramatic portion of the dialogue works much better than LEC's other major attempt at drama (the ill-conceived The Dig). Designers Hal Barwood and Noah Falstein also introduced Sophie Hapgood, an old companion of Indy's, and managed to write some of the better romantic tension in an adventure game. 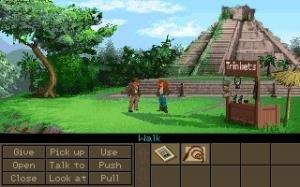 In true Indy fashion, Fate of Atlantis whisks our hero all over the world, from New York to the Azores to a Nazi submarine, and eventually to the Lost City itself for an exciting ending sequence. This is certainly not a claustrophobic game. The gorgeous soundtrack is matched with top-notch cut-scene animation, far ahead of its time in 1992.

Besides being action-packed and extremely fun, what sets Indiana Jones apart is its replayability: the entire middle portion of the game can be played in three entirely separate ways. There's the team mode, where you and Sophie can journey together and she will serve as a solution to many puzzles. There's the wits mode, where the real puzzle lovers will have plenty to keep their brains occupied. Finally, there's the action mode, where the answer to pretty much every puzzle is beating up a Nazi. The latter two modes will reunite Indy and Sophie later in the game, so the ending is the same, but the three modes are so completely different that the replayability is huge, the best in any LucasArts game (with the possible exception of Maniac Mansion). 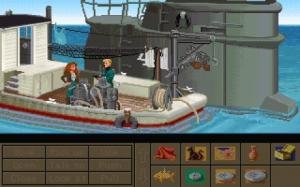 It's a tough job to take an established film franchise and build a new game out of it, but LucasArts was more than successful, and created a virtually flawless game in the process. Beautiful and still exciting to complete, Indiana Jones and the Fate of Atlantis is the #6 adventure game of all-time.

Last time: Indy came in at #5 last time; again, don't take the fact that he's one space lower as a sign that I think any less of the game. It's still a five-star adventure. 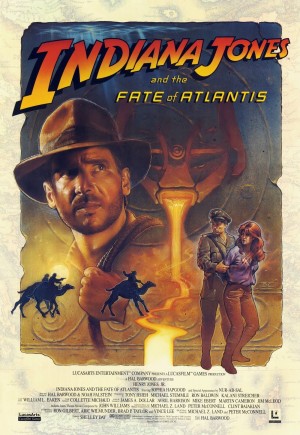