"Do you know a guy called 'Overmann'?" 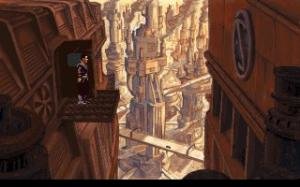 Beneath a Steel Sky by Revolution Software is one of the most tragically ignored adventure games in history. A brilliant, brilliant adventure from 1994, the game went virtually unnoticed in the States, buried in the shadow of the Big Two (although garnering a well-deserved Best Dialogue award from PC Gamer). Those who did stumble across it fell in love with it instantly; as a result, the game has something of a cult following which this writer proudly counts himself among. In fact, Beneath a Steel Sky is my all-time personal favorite adventure.

But this is not just a game that I like; this is a magnificent game that way too few people have heard of. From the brilliantly compelling introduction (featuring art by noted comic book artist Dave Gibbons) all the way through the tightly-plotted futuristic story, to the heart of a city controlled by a man with a dark secret...all accompanied by an adorable and hilarious robotic companion named Joey, who may be the greatest adventure sidekick this side of Max the rabbit.

The story is revealed very slowly, little piece by little piece. It involves interacting with dozens of different characters and eventually working down to the core of the LINC computer which apparently is controlling everything around you. It's a computer that ordered you captured—and then killed your captors to save your life. And the secret behind it, once the many layers are finally peeled away, is an incredibly successful payoff that makes the entire journey worth every minute (and of course, we know already from this countdown how highly I value endings). 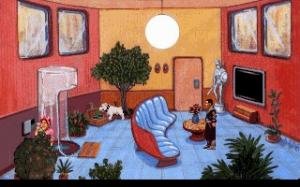 Revolution's Virtual Theater scripting system deserves more discussion, as well. The NPC's throughout the game really do follow their own programmed agenda, and the solution to plenty of puzzles requires you to disrupt that agenda. This is what gives the game its distinctly different flavor from Sierra and LucasArts adventures.

Firing this game up just reminds me why I love adventure games. Behind the graphics and sound (which are excellent, along with the surprisingly fine voice acting), there lies excellent dialogue and a very intelligent story. The atmosphere of the game succeeds so well at creating a mildly disturbing futuristic utopia, but still sprinkling it with some light-hearted touches and occasional comic relief, which often serves only to increase the tension. 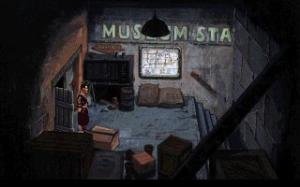 It's worth pointing out that Beneath a Steel Sky did not innovate in any way; rather it took a format and structure that had been well-defined and worked them to their full potential. The technical aspects are high-quality, the story is brilliant and compelling, the dialogue is engagingly offbeat, and it never becomes boring or tedious. A sequel to the game was considered, but the decision was made by Revolution that Broken Sword was the way to go. Do I agree? You'll have to find out later!

But today we're talking about Beneath a Steel Sky, a treasured game by any standard, worthy of being called the #17 adventure game of all-time. If you haven't ever made an effort to hunt it down, I sincerely hope you will.

Last time: BASS checked in at a rather high #12 last time (one spot above Grim Fandango, boy do I remember all those e-mails...), most likely due to the fact that it is my personal favorite adventure and I let that affect my judgement more. I believe this is a more accurate position for it.